It feels like a long time since September 14, when Everton kicked off their Europa League campaign by travelling to face Atalanta. When drawn in Group E, Lyon were widely accepted to be the Toffees’ fiercest rivals for top spot, but their opening opposition proved they provided serious competition, by beating the Toffees 4-0.

That was the start of a pretty disastrous Europa League campaign which saw Everton fail to qualify from the group with just four games gone.

But perhaps it wasn't a surprise that the club from Bergamo did so well against Everton.

They finished fourth in Serie A last season, behind only Juventus, Roma and Napoli and ahead of traditional giants Inter, AC Milan, Lazio and Fiorentina. Were they to repeat the feat this season, they would have Champions League football to look forward to in 2018/19, thanks to the fact Italy’s top four are to gain entry to the competition going forward.

The last time Atalanta were in European competition the Champions League was still known as the European Cup. The Europa League was the UEFA Cup, and the Cup Winners’ Cup was a thing. So it’s fair to say they are not used to competing at this level, and many outside of Italy won’t have known a great deal about them before this campaign, but they may very well do now, after two wins and two draws from their first four games in Europe this season.

Historically, they have tended to settle somewhere between lower mid-table in Serie A and the upper echelons of Serie B. Indeed, having just embarked on their eight consecutive campaign in Italy’s premier division, they are enjoying their longest spell in the top flight since the 1960s.

Atalanta are not without renown, however. Their youth system is one of the most consistently productive in Europe, churning out talent on an annual basis. In the past, legends such as Gaetano Scirea and Roberto Donadoni graduated from their academy, while more recently the likes of Manolo Gabbiadini, Giacomo Bonaventura and Simone Zaza came through.

Last summer they appointed Gian Piero Gasperini as head coach, sparking a complete change in fortunes on the pitch. They beat Napoli home and away, Roma and Inter at home, and took a point off of eventual champions Juventus. Inevitably, their stars were picked off by their more prestigious domestic rivals.

In January, centre-back Mattia Caldara joined Juventus only to be loaned back, while dynamic midfielder Roberto Gagliardini joined Inter. Then, in the summer, flying wing-back Andrea Conti and midfield all-rounder Franck Kessié left for AC Milan.

Atalanta didn’t hesitate to spend a large portion of the income they received from those sales, however. Making full use of their scouting network, they brought in José Luis Palomino, Andreas Cornelius, Timothy Castagne and Robin Gosens from Bulgaria, Denmark, Belgium and the Netherlands.

They also made some relatively big-name additions in Josip Iličić, Etrit Berisha and Marten de Roon, who returned from Middlesbrough for a fee of around £12million.

HOW DO ATALANTA PLAY?

Any notion that Atalanta would completely alter their approach for the Europa League was quashed by Gasperini, who told the press:

“We’ll be facing opponents we’ve never encountered before. We must adapt and see what happens, but certainly not change our general characteristics.

“Atalanta might not be a big name in Europe, but last season we fully deserved fourth place in Serie A. We have enthusiasm and won’t set specific objectives, but we are curious to measure ourselves up against different opposition. We are ready for this competition.”

Gasperini is one of the most unique coaches around today. In an era when zonal marking is seen as the most efficient form of defence, he remains utterly dedicated to man-marking. An example of this ideal within his Atalanta side can be seen in the graphic below, taken from their defeat to Napoli. 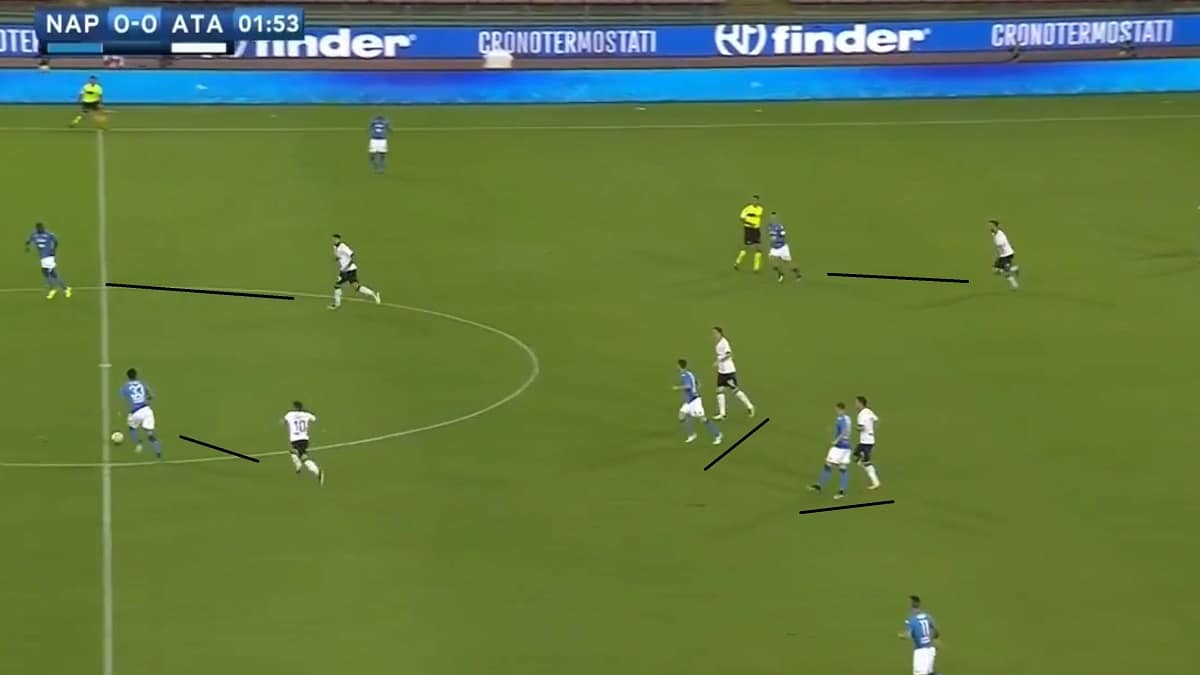 Generally, La Dea mark man-to-man all over the pitch. This defensive scheme makes it very difficult for the opposition to get time and space on the ball, and therefore often reduces their chances of building coherent attacking moves.

Man-marking is seen as an outdated concept even in Italy, a country whose earliest footballing successes went hand in hand with this approach to the defensive phase. This is because of its highly demanding nature; to undertake man-marking successfully requires impeccable levels of fitness, collective understanding and communication.

It is also high risk. Should one player fail to cover his man, there exists a possibility for the opposition to create a dangerous two-versus-one situation. And, should the opposition’s movement be well co-ordinated, they may be able to open up gaps in a man-marking defensive structure.

Fortunately, Gasperini is the concept’s master. He obtained excellent results with Genoa using man-marking, and his work with Atalanta thus far is one of the most astounding accomplishments on the continent in recent years.

It can be hard to play out from the back against such an intense setup. 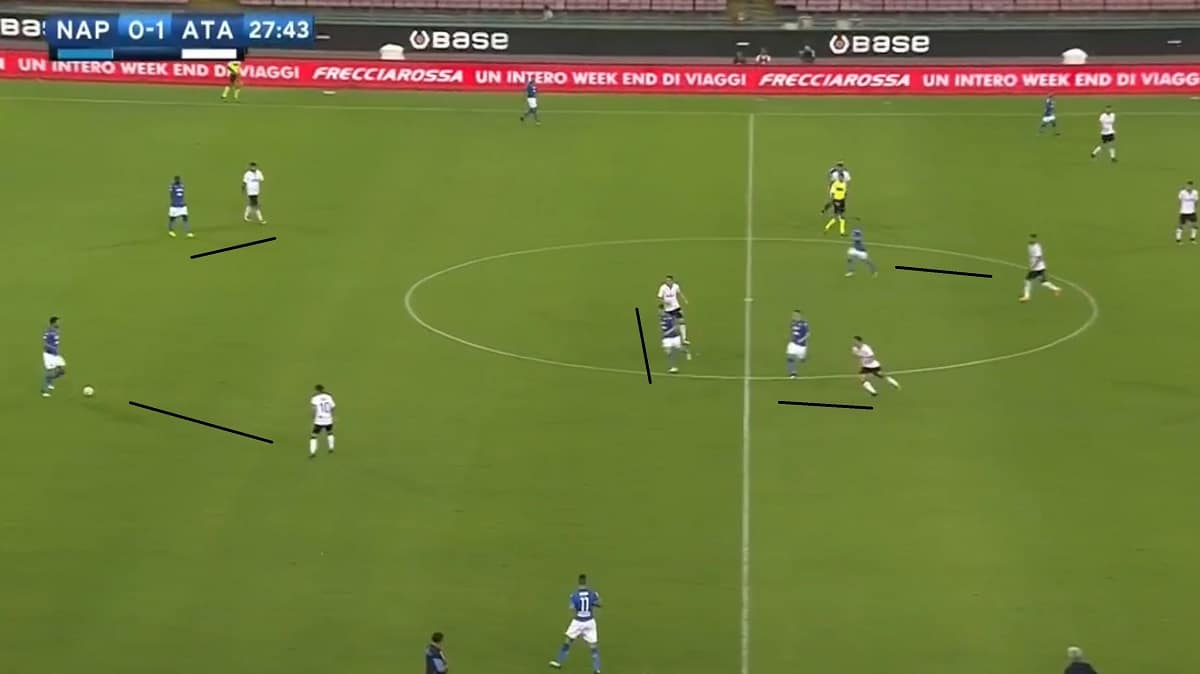 Atalanta are not so effective or eye-catching with the ball, however. Their general formation is a 3-5-1-1 with wing-backs on either side who act as outlets during the build-up of possession. The centre-back, usually Palomino, and the goalkeeper, Berisha, will often play diagonal balls out to the flanks as a means to resist pressing from the opposition.

Gasperini’s side also use the full width of the pitch when circulating the ball, gradually moving possession backwards and sideways in an attempt to provoke or find openings in the opposition’s defensive shape. 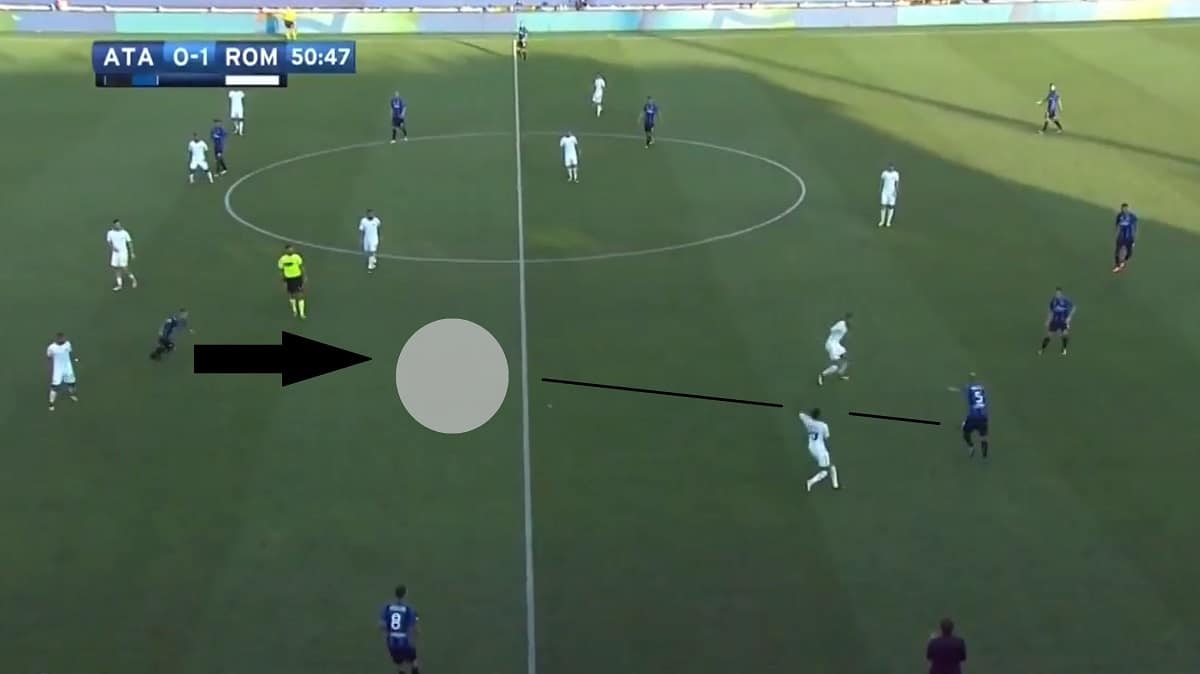 As seen in the above still, in order to progress attacks into the final third, Alejandro Gómez will often drop off in the left channel to offer a forward passing option to the left-sided centre-back, Andrea Masiello. The lithe Argentine will also look to combine with the lone centre-forward – either Andrea Petagna or Cornelius.

Both centre-forwards offer a combination of hulking physique and sound technique, making them viable targets for long balls over the top or for direct passes through the opposition midfield, as seen below. They will then look to hold up and lay off to Gómez or a runner from deep. 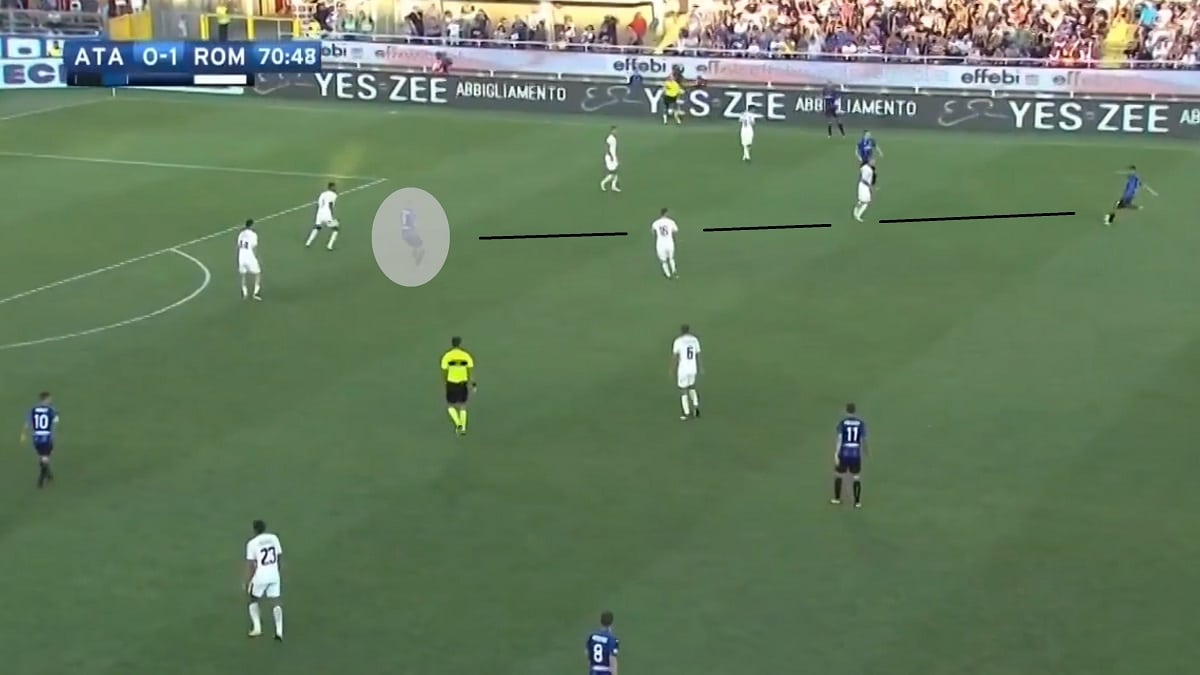 WHO ARE THEIR KEY PLAYERS?

Gómez is Atalanta’s club captain and will cause problems for Everton’s back line if not marked attentively. His movement is intelligent, often dropping deep or pulling wide to the left-hand side of the opposition defence.

The Argentine, who won his first international cap recently, is also highly technically proficient and has the ingenuity to create chances even when under pressure.

In midfield, the return of de Roon was a welcome one. During his previous season with the club, in 2015/16, the Dutchman completed more tackles per game than anyone else in Serie A.

Defensively, Rafael Tolói is one of the most aggressive centre-backs in Italy. The Brazilian is an uncompromising man-marker, combines physical strength with pace, and is also comfortable when bringing the ball out from the back.

So far this season, he has averaged more tackles – 3.9 per game – than any of his team-mates.

Everton go into tonight’s match hoping to save some face, but David Unsworth will probably make a number of changes as Premier League survival is now the priority, A decent result against a very good Atalanta could really help to lift the mood at Goodison Park.