Newcastle have reportedly agreed a fee with Norwich City for Jacob Murphy, and Sky Sports are suggesting that the 22-year-old will arrive at the club this week once he's agreed personal terms and undergone a medical.

But what are the newly promoted club getting for the reported £12million fee, and can their new signing from the Championship cut it in the Premier League?

Murphy's stock rose this summer when he was part of the England under-21 side which reached the semi-finals of the European Championships in Poland.

His performances at the tournament will have raised his profile and added a few extra millions onto the fee. He started three games and also made three appearances from the bench, playing in a number of positions from right back to attacking midfield, as well as the wing role his more accustomed to.

He laid on a goal for Alfie Mawson against Slovakia from the unfamiliar position of right back, but it won’t go down in the record books as an assist due to the Swansea defender’s shot rebounding off the keeper before being turned home on the second attempt.

He appeared on the score-sheet himself in the final group game against Denmark, showcasing his great speed on the counterattack and ability to finish once he’s reached the right position.

He times his run well to stay onside, which is difficult at that speed, alerts his team-mate to his presence, and finishes the easy chance with minimal fuss.

The following stills, taken from England's 3-0 win against tournament hosts Poland, also give a good example of his intelligent movement.

In the first image he makes a move towards his team-mate in possession. This drags his marker out of position and leaves a large amount of space in behind the defence. 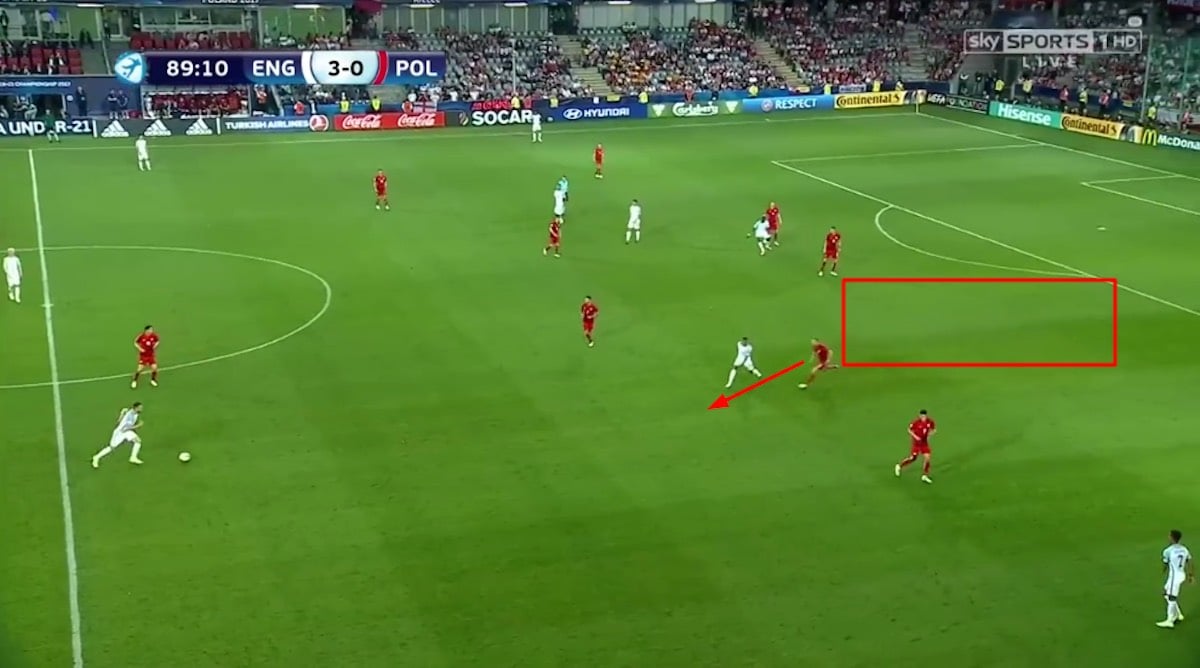 Using his quickness and agility he then abruptly changes direction, giving his team-mate a large area in which to pass, creating a three on two in his side's favour, and leaving his former marker in no man's land as the ball sails over his head. 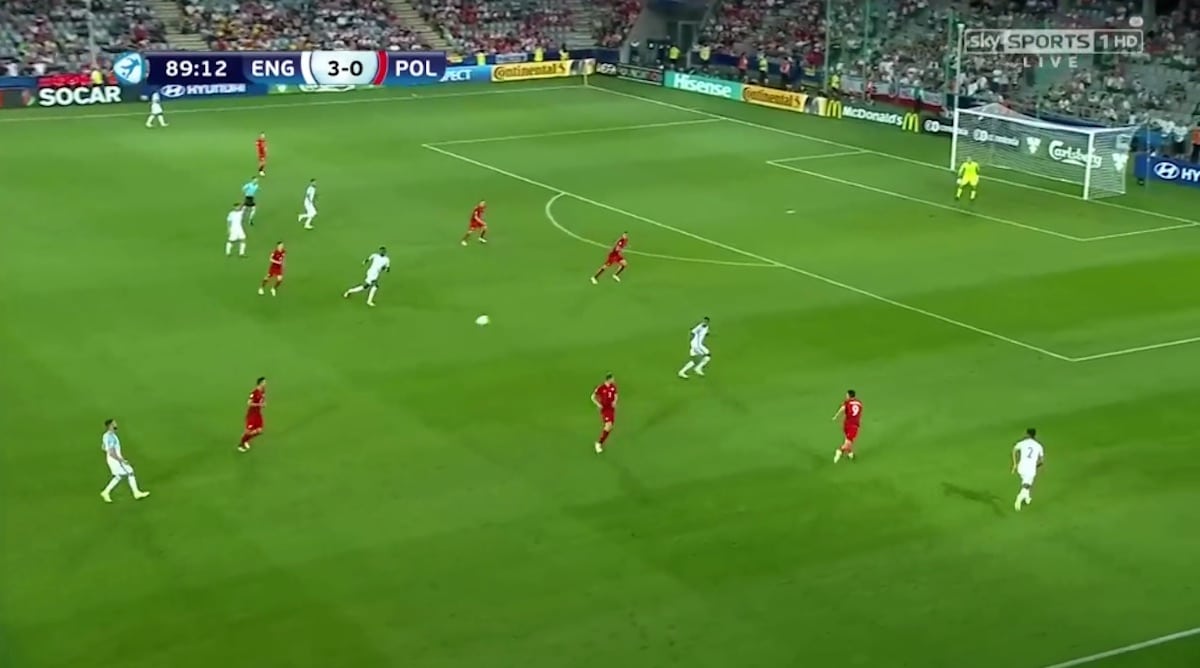 International tournaments are only a snapshot of a player’s ability though, and that type of tournament environment can be quite unique, so what of his league play at club level?

A Canary Flies The Nest

Murphy is a Norwich youth academy product whose first success came in 2013 when he and his twin brother Josh were part of the side which won the FA Youth Cup with the club’s under-18s.

A number of loan moves followed, the most successful of which came with Coventry City during the 2015/16 where he scored 9 goals in 40 appearances for the League One outfit.

Back at Norwich last season he managed eight goals and eight assists in 37 games in the Championship, demonstrating an ability to be involved in goals which attracted numerous suitors.

He gets a number of his assists from balls into the box which are classified as crosses in the statistics, but these are usually carefully considered cutbacks to the edge of the area, or passes to teammates around the six yard box.

This combination of movement and contribution to goals make him more than just a winger, and it's more accurate to say that last season he played most of his football from the right, rather than on the right.

The tactical transition should be easy to make, and the minutes spent at right back won't do him any harm in this regard either.

Football Whispers spoke to Jon Punt from the fansite Along Come Norwich, to get the view from the selling club.

“Murphy’s progression last year was rapid and unexpected. Up until the announcement of Norwich’s starting lineup for their season opener away at Ewood Park the assumption was his twin brother Josh was narrowly ahead of him in the manager’s thoughts.

“His first league start did much to showcase the raw talent he possesses, however. A turn in tight space coupled with a thunderous strike which whistled past the home side’s keeper announced his arrival onto the Championship scene.”

“His brother Josh is tricky, slight of stature yet fleeter of foot but Jacob’s approach to the game is more purposeful, he’ more willing to do the hard yards and subsequently was potentially more suited to the rigours of the second tier.”

“Murphy has flourished with regular first team football, and the sense is he needs to be playing for his career to continue on the same trajectory.

“His finishing is excellent, and his canny knack of sniffing out chances in the final third a wonderful gift. Yet this may be too much too soon for a man loaned to the likes of Blackpool and Coventry in the not too distant past.

“Mental fatigue set in last season and his form dipped. He also can be prone to neglecting his defensive duties. Both of those are issues that can be fixed, and if Rafa can manage him carefully, there may be a future England international in the making.”

The player professed his allegiance to Newcastle on Twitter way back in 2013, and this connection should endear him to the fans and maybe even mean he gives that little bit extra when wearing the black and white. 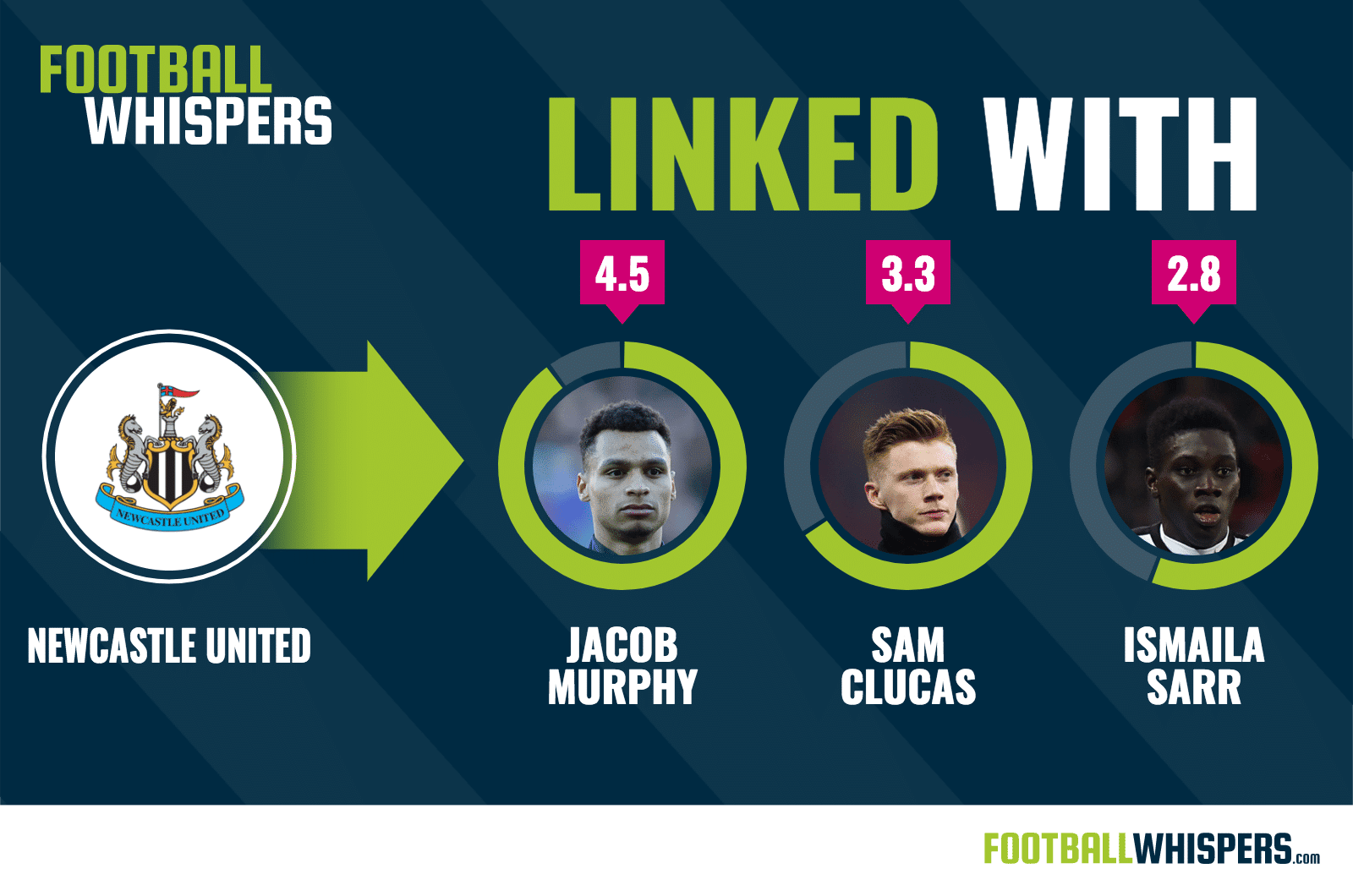 He may start off as backup to Matt Richie and could also find himself fighting for a place in the side with new signing Christian Atsu, but Benitez will have a plan for the player, and if he can prove himself in the Premier League the Spanish manager will continue to use him.

It's here that his versatility could come into play, and making appearances across the front three from the bench could become commonplace as he settles in at his new club.