Tottenham Hotspur have renewed their interest in Estudiantes defender Juan Foyth, according to Sky Sports News.

Manager Mauricio Pochettino and chairman Daniel Levy were in negotiations with the Argentine club and their president, Juan Sebastián Verón, for a number of days last month, but Spurs withdrew their interest when Estudiantes raised their asking price.

PSG also entered the race and were thought to be on track to conclude a deal. However, Tottenham reignited their interest and Pochettino has, reportedly, managed to convince his compatriot to move to London instead of Paris.

Landing Foyth ahead of PSG, who signed Neymar for a world record fee this summer, would be a coup for Spurs. He is considered one of the brightest youth defenders in world football alongside fellow new Tottenham signing Davinson Sanchez.

But what could he bring to Tottenham? We have profiled the Argentina Under-20 international.

Who is Juan Foyth?

The Argentine defender only made his debut earlier this year but he caught the eye with his standout performances at the U-20 World Cup. His composed and calm approach impressed many and he was linked to a number of clubs.

Roma, Zenit St. Petersburg and unnamed Premier League clubs had reportedly shown interest in Foyth but it's Spurs who have stole a march on them all with Pochettino using his relationship with Verón – the pair played together for their country – to his advantage.

The centre-back has been compared to Spurs star Toby Alderweireld as well as John Stones due to his ability on the ball and proactive approach to defending. Foyth is also able to play as a defensive midfielder and this in itself throws up a question or two.

Is he a long-term replacement for the Belgian or is he arriving to replace Eric Dier, a Manchester United transfer target?

The 19-year-old recently revealed who his heroes are: “I like European football. There I try to copy Mats Hummels [Bayern Munich] and Gerard Piqué [Barcelona].”

It's glaringly obvious in his game, too.

He brings the ball out from the back like a seasoned veteran and has the ability to play those incisive passes with his right foot that you expect to see from a creative midfielder, not a centre-back. He'd be an asset to any team looking to build from the back.

There aren't many stats available from the Argentine league but if there were the sample size wouldn't be large enough to really analyse anyway. Furthermore, it's risky to use stats to read into young centre-backs in general.

What you do need to look at, though, is their performances in general. He controls space well and is comfortable defending the channels. He doesn't dive into tackles and instead prefers to stay on his feet.

He's by no means dominant in the air but that's more to do with his often acting as the sweeper instead of the aggressor. When called upon in the air he puts his 6ft1ins frame to good use.

What really makes Foyth a perfect centre-back for Pochettino is his proactive nature. He anticipates passes into the feet of the opposition and stops the attacks before it reaches his penalty area. Then, after winning the ball back, he's always looking to get his team onto the attack.

People able to play out from the back Is becoming a necessity for modern day centre-backs. But sometimes it can look forced and unnatural meaning it can lead to mistakes. However, with Foyth it's part of his style. It's just who he is.

In the screenshot above you see Foyth in possession having received the ball from the player at the bottom right of the picture. He could play the pass highlighted by the red arrow and hand over responsibility to the man in midfield but he opts to carry the ball forward himself, shown by the white arrow. 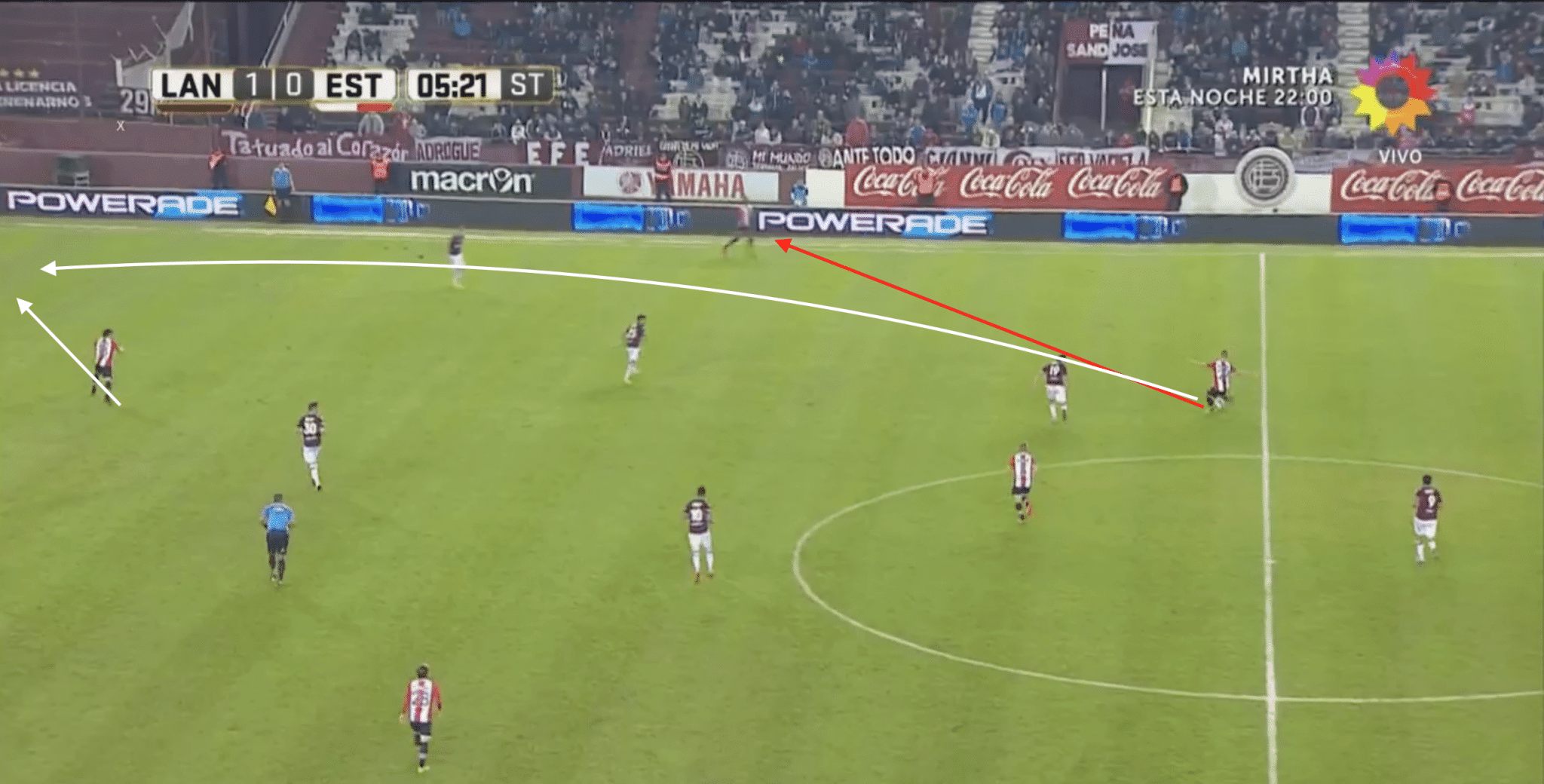 He brings the ball into the oppositions half and again ignores an easier pass. The red arrow shows a pass he could play, to the man on the right in space, but it's one which allows the opposition to keep men behind the ball – it's not really progressive.

He plays the ball to the left of the opposition's left-back and into the space which allows his forward to drag the centre-back into a wide area. It's by no means and easy pass either yet he manages to weight it well. 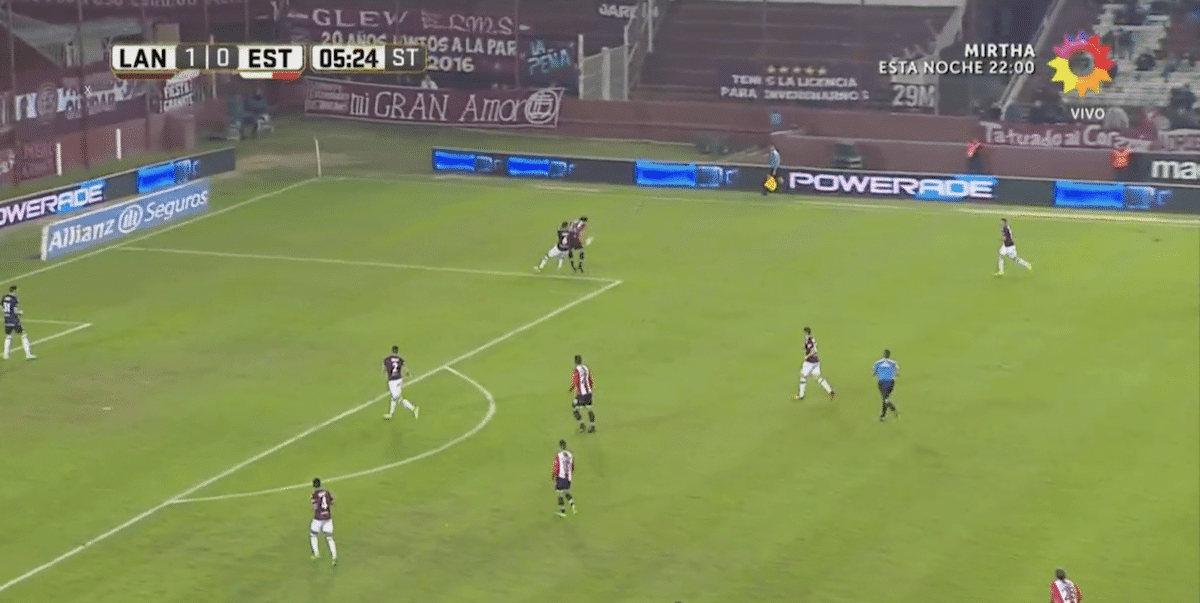 The pass spreads the opposition's defence and it's two vs. two in a central area if the man in possession is able to beat his man. He does wriggle away but dives in an attempt to win a penalty and the move peters out.

Foyth is able to switch the play. In a back three it's a good tool to have when the wing-backs are isolated in wide areas and have the pace to beat their counterpart with space ahead to drive into.

And, due to his versatility, he would be able to play in a defensive three – especially if he was sandwiched between Alderweireld and Vertonghen.

All in all he could well be another shrewd signing for Levy and Spurs. But, like with many other of the signings at the club over recent years, Foyth will need patience and time to settle.