You’re Swedish, you’re a talented young centre-forward, as predictable as the sun rising every morning – unless you live in Manchester – you will be touted as ‘the next Zlatan Ibrahimović’.

However, just 17 years old, Alexander Isak, looks like the real deal. That is why a number of top clubs were heavily linked with the former AIK Solna striker before Borussia Dortmund pounced. In 24 league games, 19 from the start, the Swedish Under-21 international scored 10 times as his club finished second in the league last season.

Paris Saint-Germain were heavily interested, with Zlatan himself personally recommending the forward to the French side and another former club, Juventus. Liverpool were reported to have been in contact with Vlado Lemic, his agent and the club’s sporting director, Bjorn Wesstrom, to register their interest. Apparently scouts from around 90 European clubs paid a visit to the Friends Arena to watch the teenager before he signed for Dortmund.

AIK play 3-5-2 and the forward impressed in the two-man attack. Despite his young age, he has shown excellent positional awareness, great movement and outstanding ability on the ball.

Isak can play the target-man role, he can drift to either side of the pitch and provide a threat with both feet. He’s quick for someone measuring over 6 foot 2 inches tall. Watching him play, it’s normal to see him pop up on both sides of the pitch and the Swede is comfortable cutting inside. He’ll look to shoot, but has the awareness to keep his head up and pick a pass.

Alexander Isak, AIK 2016. Hot hot hot on the rumor mill. Not many 17-yo strikers playing in a big league. @MessiMinutes pic.twitter.com/oyWHNWoQi9

“His performance is like boxing in the ring. All predictions are based on performances in the ring, and Isak’s accomplishments on the field speak for themselves,” team-mate Chinedu Obasi – the man who anointed the forward as the heir to Zlatan’s throne – told Swedish newspaper Expressen. He was speaking after Isak had scored twice in the huge derby game away at Djugardens – the same day he celebrated his 17th birthday. All too often, these next wonderkids are hyped up beyond what they can achieve, but from what you can see from Isak, he looks the real deal. At his age, a lot can happen to stop him from fulfilling his potential, but per the Swedish press, the youngster comes across as a thoughtful and well-rounded young man. Something that seems to go against the grain in modern football. “I have to eat more and gain more strength. It might get a little more muscle with age. I’m not that old yet,” Isak told Aftonbladet back in April. You can already see improvements in that area of his game. Against Kalmar FF, after being played through on goal, his touch took him away from the centre of the goal, but he had the power to hold off the taller, more physical defender and kept his cool to fire low passed the goalkeeper. Out wide, he is definitely big enough and strong enough to keep full-backs at arm’s length, then because of his speed and trickery, if they get too close he can blow by them, but stand off and he can beat the opposition on either side. A brilliant example of his all-round game came in the 2-0 win over Östersunds FK. With AIK on the attack, Isak (in yellow), 20 yards from goal, looked to get the ball into feet. When the ball went right, he made his darting run to the back post. The cross looked a little high but the 17-year-old made a fantastic leap to power the header towards goal. It was saved, but he was alert and followed up the rebound to find the net. 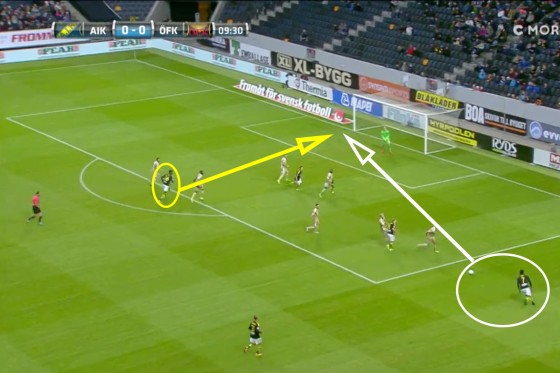 A threat in the air, a danger on ground, the Swedish defences have looked at a loss as to how to stop him. His goal against IFK Norrköping showcased his touch and finishing prowess. The low cross was played in from the right, Isak took the ball away from the defender with a superb first touch, then with his second he applied a powerful, but controlled low-finish on the half-volley. Those two goals are everything you would want from a centre-forward.

Don’t let the Zlatan labels fool you, we’re talking about the Ajax/Malmo version, the young kid who had it all. Isak is perhaps more mobile than the Manchester United forward ever was and his athleticism will appeal to Dortmund.

And with the Swedish league on a break, the time was perfect for the Bundesliga side to pounce during the January window.