They've fought their way this far and now they're at the final preliminary stage. Which side will deliver to keep their Champions League dream alive? Find out with our Prishtina vs Inter Club d'Escaldes match preview with free tips, predictions and odds mentioned along the way.

Can Prishtina make their dream a reality?

Prishtina have looked good value getting to this stage of qualifying and we're making the prediction that they win this match too. They've only lost one of their last 10 winning eight in the process. They come up against a Inter Club d'Escaldes side that are in reasonable form themselves but with three draws and two defeats across their previous 10 they're not in quite the same place as Prishtina.

A game to be decided by the odd goal?

Prishtina's domestic form might not support an under 2.5 prediction but a look at their results in qualifying to this point suggests there is value in the bet. Prishtina have played two games to this point with both coming in at two goals; that's obviously under the 2.5 cut off. Inter club d'Escaldes have only played the one match but saw it end 1-0. When you consider those stats for what they are, it means neither side have played a qualification game that has gone over 2.5.

Our final tip focuses on the fact that we expect at least one team to fail to score. We've already spoken about how goals have been limited in both sides' qualification campaigns; the reason for that is because neither Inter club d'Escaldes or Prishtina are yet to concede a goal in the competition. Are they both likely to buck that trend now? We think not.

A low scoring game with a huge prize on the line

Both sides have done well to reach this stage of the qualifying process but now it's about who holds their nerve; the reward for the winner of the tie is a place in the Champions League qualification stages ‘proper'. The match itself is bound to be a tight one with both sides boasting impressive defensive records to date. It means the winner will likely be found courtesy of a mistake or magic from attacking talent. Prishtina will be looking to John Otto although defender Besnik Krasniqi has a great goal scoring record too. For Inter Club d'Escaldes all the pressure will fall on Spaniard Gerard Artigas. 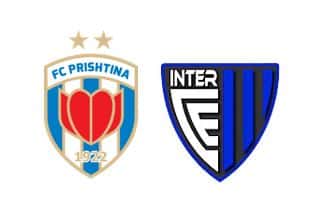