Manchester United vs Arsenal used to be a war. A battle for both sets of fans as well as neutrals to relish. Fergie vs Wenger. Roy Keane vs Patrick Viera. Ruud Van Nistelrooy vs Thierry Henry. However, as of late this rivalry has petered out. Fergie retired, the star attractions went elsewhere and all out war turned into a chess match.

What was once two prizefighters in their prime going at it quickly evolved into two rivals-turned-friends coming out of retirement to put on a charity event. The rivalry lost it’s bite.

But there’s a chance this rivalry is explosively reignited now that Jose Mourinho is at the helm of Manchester United. There’s bad blood between the self proclaimed Special one and the specialist in failure, Arsene Wenger.

Jose Mourinho’s appointment as Chelsea manager back in 2004 signified a change for Arsenal. Arsenal went from being regular Premier League challengers to a team content with finishing in a Champions League place. A Jose Mourinho lead Chelsea, backed by Roman’s millions, won two successive Premier League titles and finished as runners up in 2006/07. Arsenal finished 2nd, 4th and 4th. Mourinho’s rise in the Premier League coincided with Wenger’s fall. The ‘voyeur’ – a nickname given to Wenger by Mourinho – watched on as Chelsea started to dominate domestically.

The Portuguese manager certainly has the Frenchman’s number. Wenger’s 1000th match in charge of Arsenal finished in a 6-0 defeat at the hands of Mourinho and the United manager is currently undefeated in 14 matches against Wenger. There’s going to be some needle in this match.

United and Mourinho go into the game knowing there’s a lot to play for. The Red Devils are six points behind Arsenal in the Premier League table and falling 9 points behind at this early stage in the season means there’s a lot of ground to make up. On a personal level Mourinho has the chance to not only extend his undefeated streak against Wenger but be the one who puts an end to the Gunners’ 16 match unbeaten run this season.

How it could be won?

Arsenal are scoring freely and United aren’t as defensively solid as a Mourinho side tends to be. The Gunners, on average, are scoring 2.1 goals per match and United are conceding 1.18 goals per game. Conte’s Chelsea put United to the sword but Mourinho’s United managed to blunt a rampant Liverpool attack and did fairly well against Guardiola’s Manchester City. In the two latter matches United used a high press to stop the teams playing out from the back. It’s not a tactic usually associated with Jose Mourinho but his United team did well to disrupt the opposition. With that in mind it may be a tactic United use against Arsenal.

The Press Against Manchester City 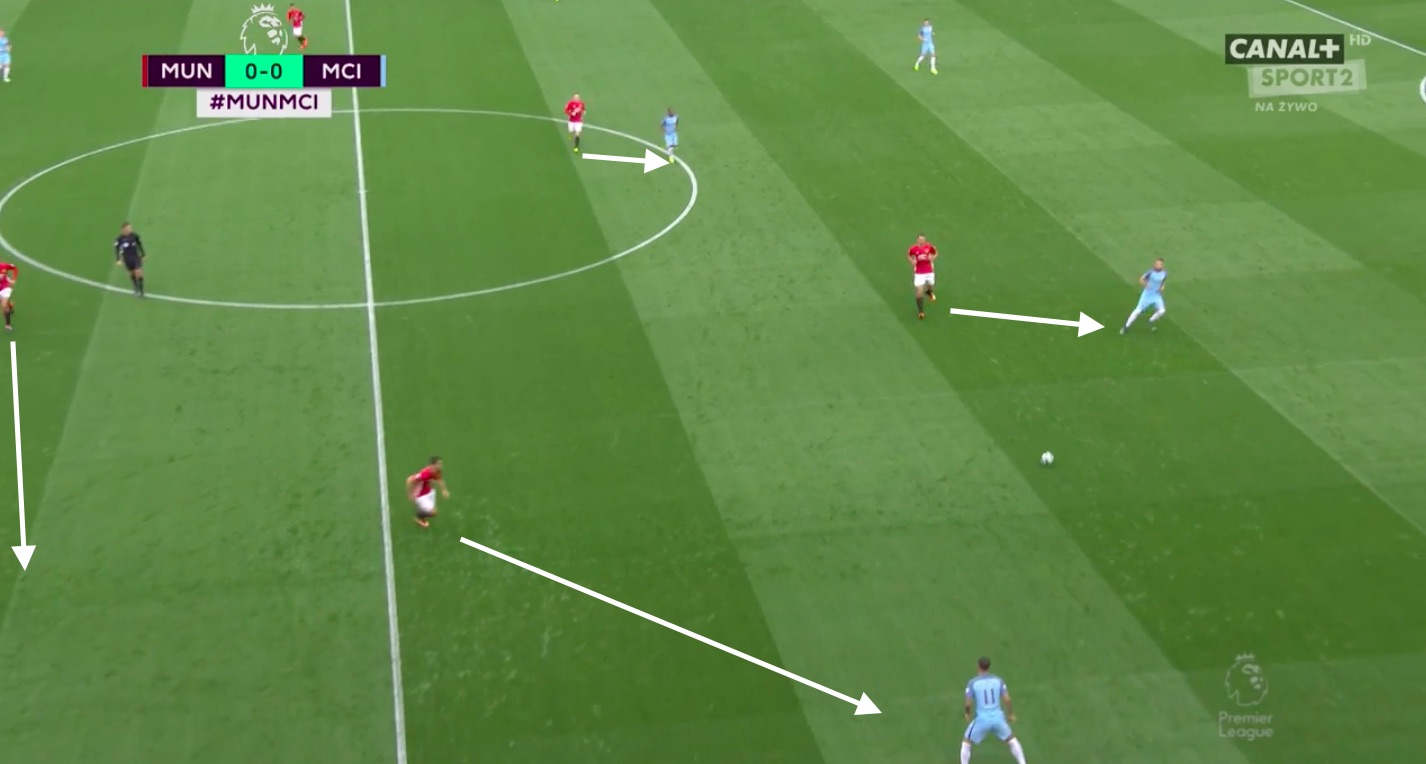 In the picture above you see the United press in the Manchester City half. Nicolas Otamendi, pressed by Zlatan Ibrahimovic, plays the ball left to Aleksander Kolarov and United’s Henrikh Mkhitaryan pushes out to prevent him carrying the ball forward. Wayne Rooney is positioned close by to Fernandinho and Fellaini is making his away across to the United right to shut off that passing channel. As Kolarov receives the ball there isn’t an easy pass on. 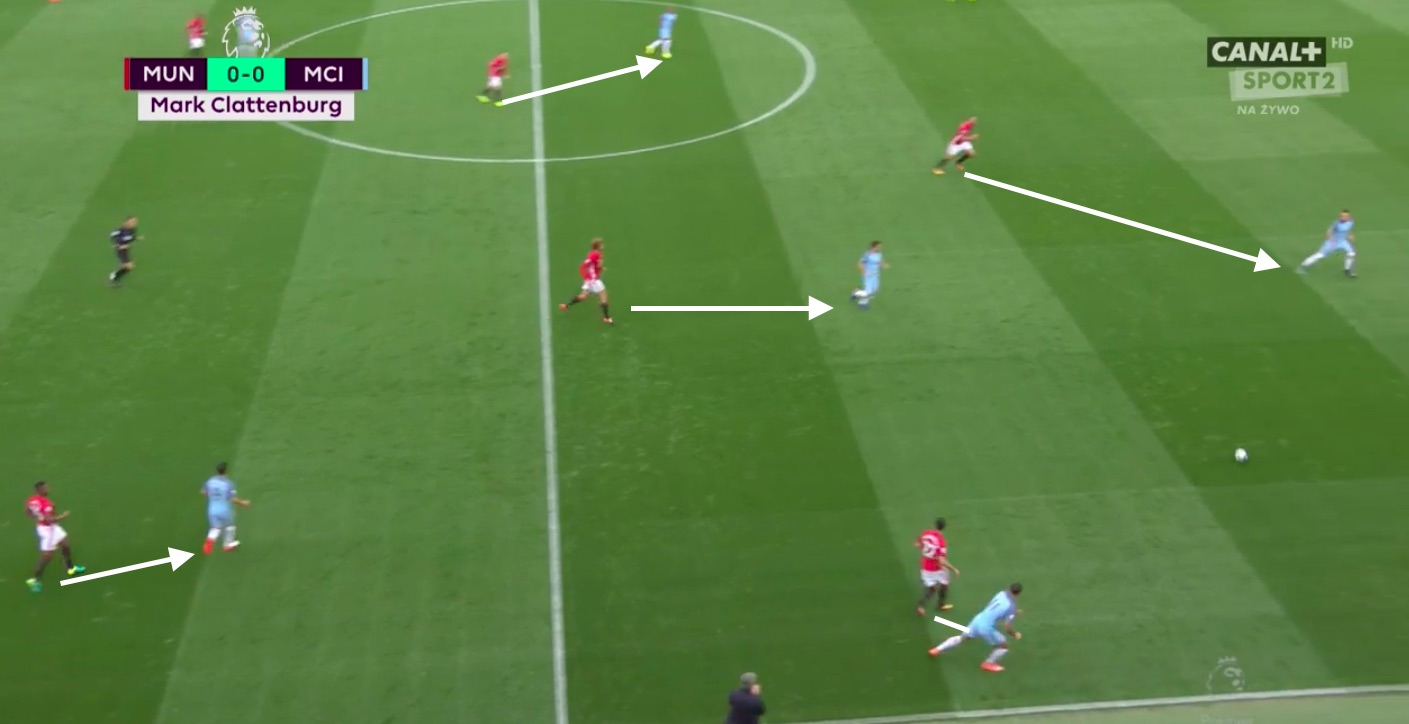 Otamendi drops deeper and Kolarov is forced to play the ball backwards to the Argentine. As you can see in the picture United have almost gone man for man in an attempt to force City to go long. Valencia is close to Nolito, Rooney is closing in on Fernandinho, Mkhitaryan on Kolarov and Fellaini is tracking Silva deep in the City half. 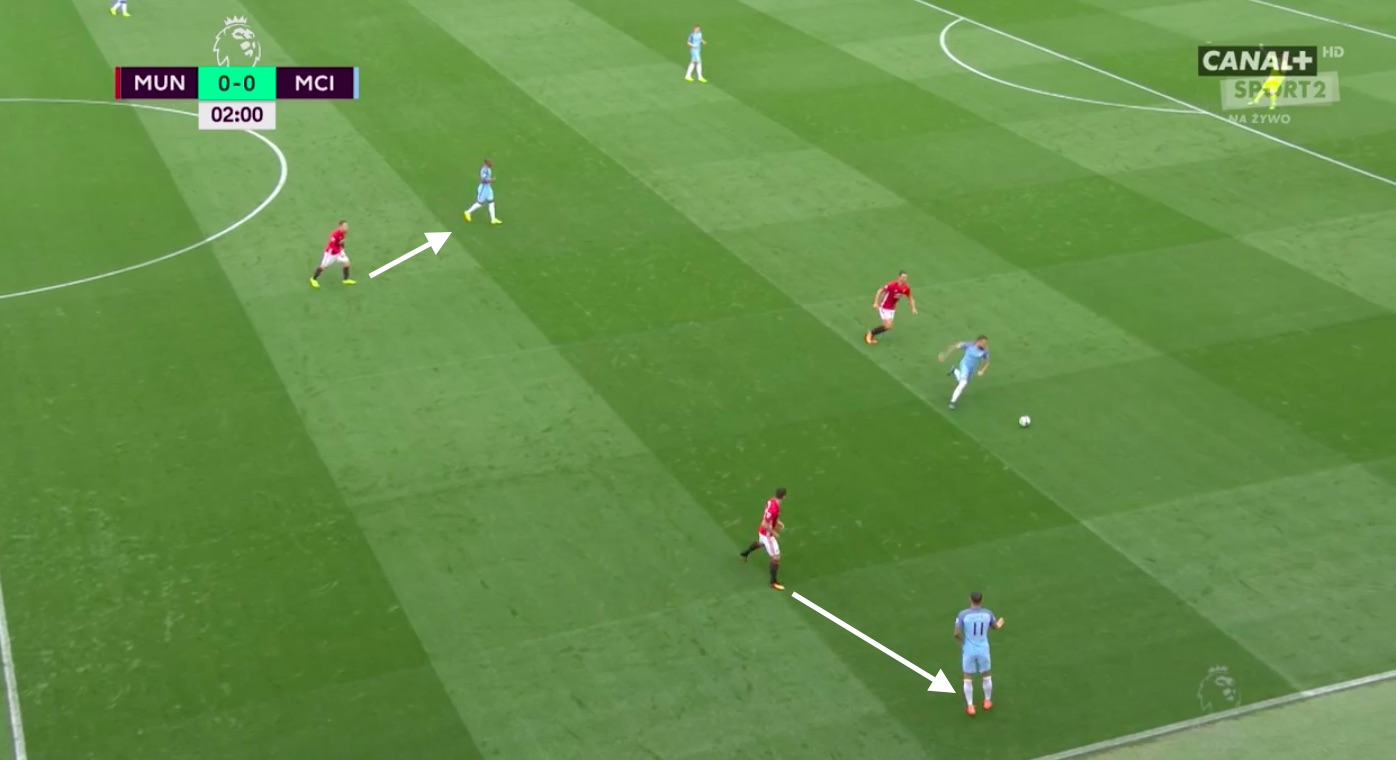 Otamendi is forced to play the ball all the back to Claudio Bravo as City look to start again if they’re to retain possession. As Bravo plays the ball out to Stones the United press on the left intensifies as they look to keep City boxed in. It’s interesting to note that the opening goal in the derby was a result of a long ball by City that De Bruyne made the most of.

The Press Against Liverpool: 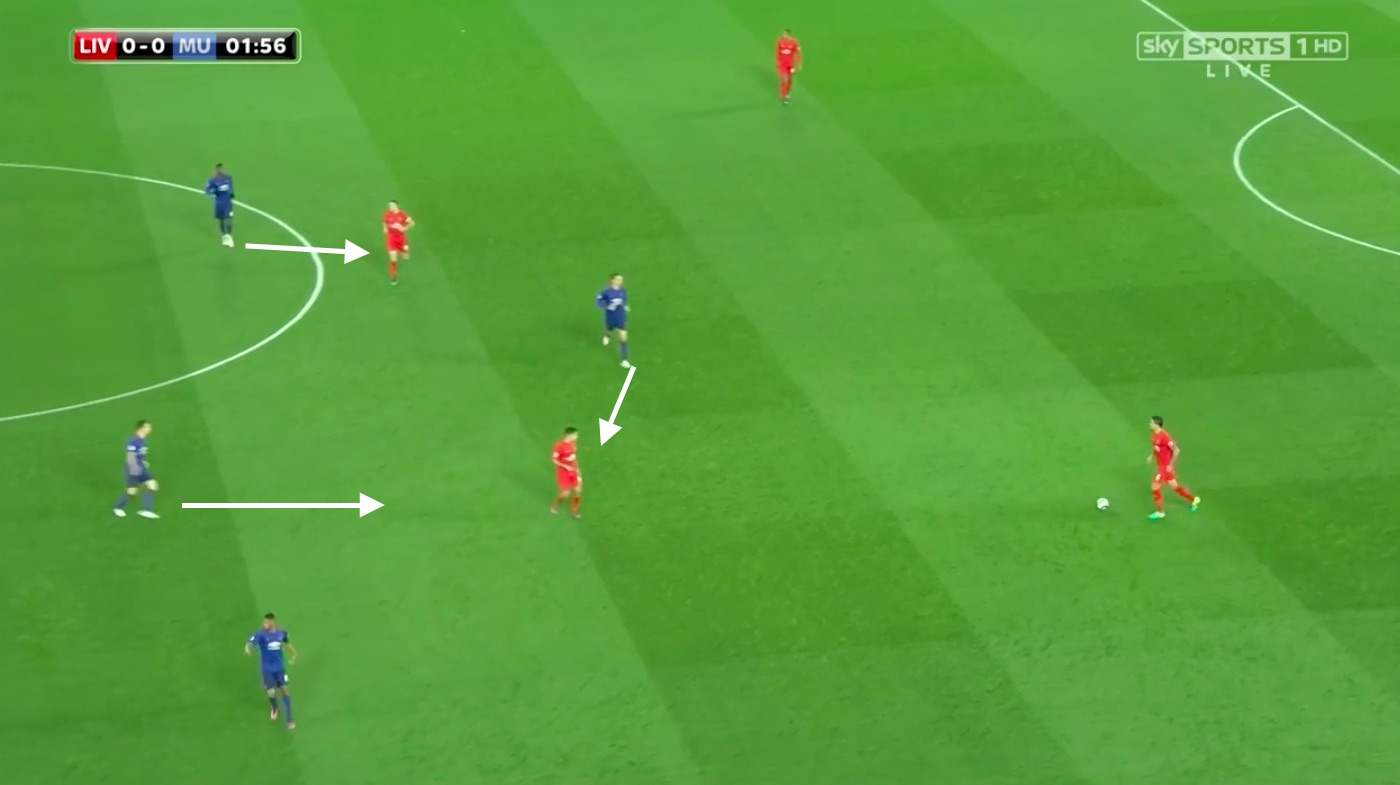 Similar to the Arsenal match United looked to force Liverpool to go long. In this picture you can see Lovren in possession but other than passes to either Joel Matip or Loris Karius there aren’t any ‘easy’ passes on. Pogba is closing in on Henderson with both Herrera and Ibrahimovic close to Coutinho. As Sky Sports have highlighted recently, Jordan Henderson has made the most passes forward this season so stopping him means the supply into the Liverpool attack is stunted. Coutinho has the ability to dribble through midfields so nullifying that forces the Reds to go long. 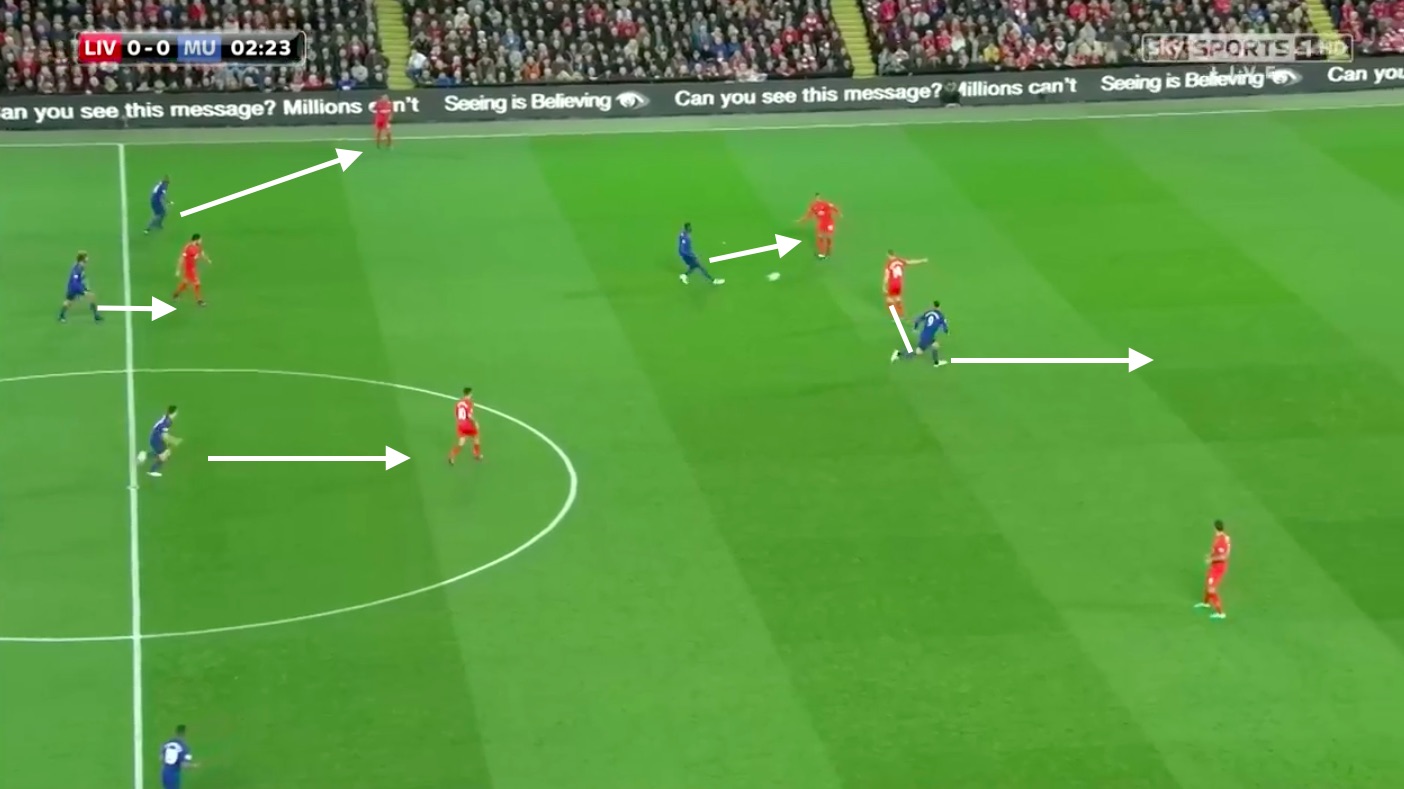 The United press in full swing. Paul Pogba isn’t giving Joel Matip time on the ball and Ibrahimovic has taken Henderson out of the game. Matip could pass the ball back to Karius, like Henderson is suggesting, but instead he opts to pass to Coutinho despite Ander Herrera being in close proximity. Fellaini is close to Emre Can and Ashley Young keeping tabs on Clyne. Herrera takes the ball off of Coutinho but luckily for Liverpool the referee awards a free-kick. 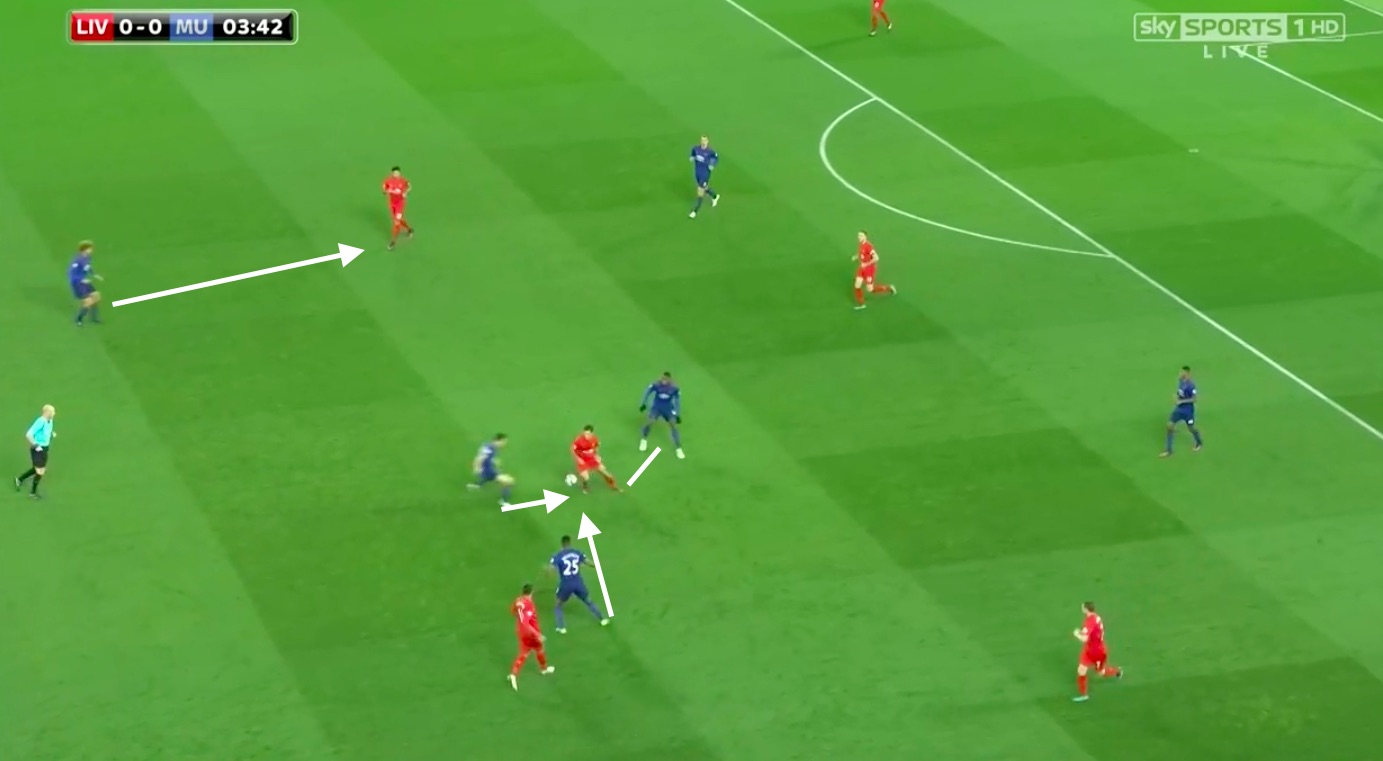 The picture above is taken as Coutinho receives the ball off of James Milner. Straight away the Brazilian is swarmed by three United players as Fellaini closes off the pass to Emre Can in midfield. Once again the referee awarded a soft free-kick but had United regained possession they would have had players in attacking areas. Gegenpressing being used against Klopp.

Over the last three Premier League matches Arsenal have averaged 604 passes per match. Mustafi and Koscielny, the Arsenal centre-back pairing, average 117 passes between them every match. So the centre-back pairing see a lot of the ball as Arsenal play it out from the back. Francis Coquelin averages 48.1 passes and Granit Xhaka averages 54.4 passes per 90. Those two are expected to start in centre midfield with Santi Cazorla ruled out. The centre-backs and the centre-midfielders are responsible for almost 220 of the Arsenal passes.

Pressing those four players and cutting off passes will force Arsenal to go long and it will be hard for the Gunners to find a rhythm and dictate play like they do. It also plays right into Manchester United’s hands. United dominate aerially. In terms of aerial duels won per 90 minutes so far this season – Fellaini 3.9, Pogba 2.6, Smalling 2.6, Blind 1.8. In comparison the Arsenal attack struggles – Sanchez 0.4, Walcott 0.7 and Ozil 0.4. If Arsenal have to go long they’re going to lose the aerial battles. It’s as simple as that. Unless Wenger opts to go with Olivier Giroud who wins 1.2 aerial duels and may use his presence to compete with the United defence.