Sometimes in life it is easy to confuse love for one thing with love for something else.

Do you really like that favourite uncle, or just the fact he gives you money every time he sees you?

Do you really enjoy playing Football Manager, or is it just the fact it gives you the impression of control and feeling of expertise when the match engine decides if your team wins that game?

And did you really expect Fulham to shine on their return to Premier League, or was it just your love for Ryan Sessegnon?

For now, let's focus on that final question. Seven games into their top flight campaign and the Cottagers are struggling. They've won just once and are sitting one place above the relegation zone.

Of course, it's early days and they did only make it up through the play-offs. But what's gone wrong for a side that so many expected more from?

A leaky defence and impotent attack

The common approach after being promoted is to do a Burnley; largely that means putting as many players behind the ball to defend as possible. Teams may not have the talent to create lots of chances but a manager can instil a structure that ensures goals are not easily conceded.

This is not what Slaviša Jokanović has had his Fulham side do, though.

They were a modern (read: pass the ball) team last season and haven’t looked to change their approach. Despite being the new boys, they make the most passes per game of any team outside the Premier League's big six.

But this isn’t helping them much. Only Burnley concede more shots than Fulham and, while they're eighth in the shots for charts, that's hiding the true story.

What's concerning is that Jokanović’s side are the only team in the league to take more shots from outside the box than inside it. It's a sign that Fulham are struggling to get the ball into the penalty area and a real worry for a team looking to avoid relegation.

This scattergun approach to shooting may come from the fact the Cottagers are also struggling to make their way up the pitch. They’re the second-worst in the league at reaching the final third, with just 39.8 per cent of their sequences of possession ending there – the league average is just under 45 percent.

It’s hard to see where any forward drive is coming from in the team. Jean Michael Seri was an exciting signing but isn’t having the effect some expected he would. And, while he’s near the top of the tree among midfielders for setting up shots, many of these didn't lead to high-quality chances. 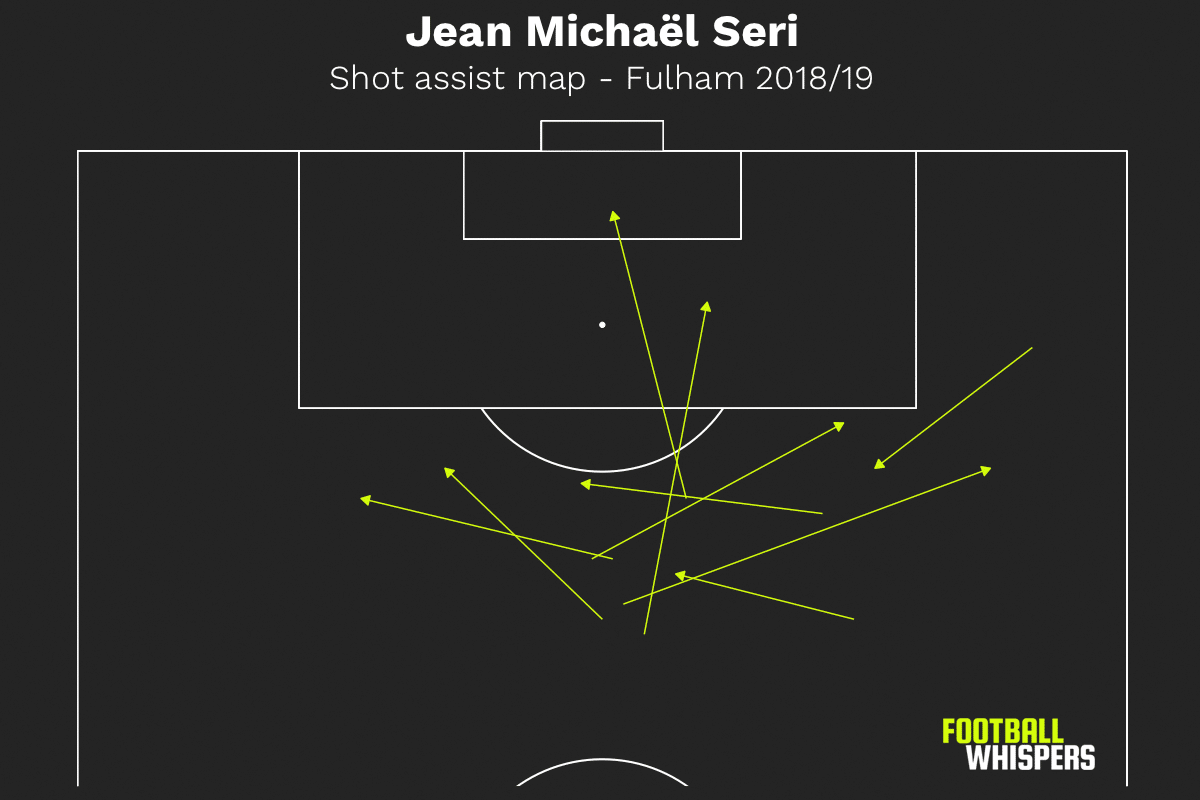 Full-backs are an underrated tool for moving the ball up the pitch, but Timothy Fosu-Mensah, a centre-half by trade, at right-back limits what Fulham can do on that side of the pitch.

On the opposite flank, Joe Bryan is a little more effective, but isn’t in the same class as Patrick van Aanholt or Kieran Trippier; attacking full-backs at smaller sides in years past who proved to be huge assets.

Summer recruit Luciano Vietto is one of the few Fulham players moving the ball into the penalty area, though.

The on-loan Argentine is a respectable 27th in the Premier League for passes that end within 18 yards of goal, not far off the likes of Mesut Özil and Mohamed Salah.

And, in a sense, that brings us back to our first love: Sessegnon. Still only 18, he tore up the Championship last season, scoring 16 goals and claiming eight assists. It’s no surprise he was a Tottenham transfer target in the summer.

However, in his brief time in the Premier League, he’s struggled to make much of an impact, although he's been moved between left-back and various roles further forward.

The England youth international has averaged just 4.6 successful passes in the final third – only Maxime Le Marchand has made fewer out of the ten Fulham outfielders who’ve played more than half of the available game-time.

It’s the same story when looking at passes that end up in the penalty area. Despite being an attacking player, there are only defensive players below Sessegnon on the list: Le Marchand, Denis Odoi, and Kevin McDonald.

Even Fosu-Mensah beats Sessegnon’s 0.96 passes in the area per 90 minutes which will be of concern to Jokanović and the youngster's many admirers.

It's clear Fulham are really struggling, but it is a phrase so often used it’s almost becoming cliché; Jokanović’s sides improve as the season goes on.

Last term they earned 32 points in the first half of the season and 56 in the second, only failing to win six of their final 23 matches.

Fulham could do similar this term, they are integrating new players after all. However, if their form only picks up around Christmas time, the damage might already have been done.