Stoke have bounced back well from their surprise defeat against Derby and are aiming for three wins in the space of a week. Can they get it at Deepdale? Find out with our Preston vs Stoke match preview with free tips, predictions and odds mentioned along the way.

Preston vs Stoke: Our betting predictions

It would be a lie to dress Preston up as draw specialists but four draws from their opening nine isn't far off the most draws in the league. We see them having to share more points here too. All four of Preston's draws have come in their last five games. They are, however, unbeaten in seven, which is why Stoke will find it a tough game to win. Stoke themselves have won back to back games after suffering just their second defeat of the season at Derby. A point here will continue their decent start to the campaign.

With this tip we're are suggesting that at least one of Preston or Stoke will fail to score. The form book has that in the balance with both teams scoring in six of Preston's last 10 whilst Stoke's previous 10 games offer up a fifty fifty split at five out of 10. The determining factor for us though is the head to head record; the last three and four of the last five meetings have all seen at least one side fail to hit the net.

Our final tip builds on the fact goals haven't exactly been flying in for either side. We, however, are focussing on the hosts and suggest Preston will score a maximum of one goal in this game. In their nine league games this season they've only scored two or more goals twice. Stoke have only conceded two or more goals three times. Neither team hold an average that comes close either so, despite the modest odds, this bet has serious value.

The best odds for Preston vs Stoke

Team news for Preston vs Stoke

It's a strange time to be a Preston fan; you're unbeaten in seven games, which shows you're doing something right but you're still down in 15th in the table and closer to relegation than the playoff spots. The reason is clear though; more goals are needed. Can anyone help Emil Riis out in that department? Chef Evans and Connor Wickham being injured hardly helps. For Stoke though, they're right in the thick of the early season playoff race sitting fifth. With Joe Allen potentially back in the mix for this game after injury the Potters will feel even more confident about what they can go on to achieve both in this match and beyond.

FAQ for Preston vs Stoke 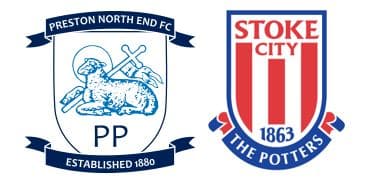