Preston vs Nottingham Forest Prediction: Check out our betting tips

Both of these sides are just a good run of form away from a playoff spot but it's going to be a tough ask for the pair of them. Does either have what it takes to bank three points here and start the chase? Find out with our Preston vs Nottingham Forest Prediction match preview with free tips, predictions and odds mentioned along the way.

Preston have had the most draws in the Championship this season; they've drawn 12 of their 33 league games. As a matter of fact, Preston have played 16 home games, and they've drawn eight of them; that's a 50% draw rate at home. Nottingham Forest have had their fair share of draws, they've drawn eight games this season. It's worth noting that meetings between these sides have seen a few draws recently; as three of their last six encounters ended in draws. It's even more interesting considering four of the last five times Nottingham Forest visited Preston, the spoils were shared; for these reasons, we believe that both teams will take a point from this game.

We've mentioned that these teams tend to draw when they play against each other; we would also like to point out that those clashes have mostly been on the low scoring side. Five of the last seven clashes between these sides went under 2.5; as a matter of fact, all of the last seven times Nottingham Forest visited Preston, they scored less than three goals. It's also worth mentioning that Preston kept four clean sheets in their last five games; with four of those five games going under 2.5. On that note, this will likely be a low scoring affair.

These sides are both locked in mid table with an outside shot at the playoff places. In order for that top six ambition to become a reality they'll need to find wins on a consistent basis though and that's easier said than done in a tough Championship.

Preston's six match unbeaten run ended when they lost at home to Reading last weekend; it's even worse considering Reading had no wins in 12 games prior to that match-up. Ryan Lowe's men will hope to bounce back from that disappointing loss by defeating Nottingham Forest today.

Nottingham Forest have enjoyed a good run of form; they have six wins in their last eight games across all competitions, losing just once in that stretch. Forest have also had a couple extra days of rest, considering they didn't play last weekend; they'll look to continue their good form with a win today. 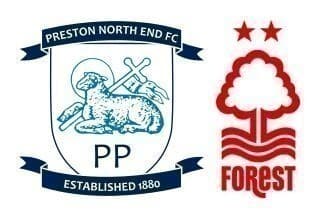