It’s the calm before the storm as clubs move their chess pieces into place to react as soon as the fuse is lit on the 2019 summer transfer window.

And it could be about to happen.

According to France Football, Presnel Kimpembe will look to leave Paris Saint-Germain if the Ligue 1 champions sign in-demand centre-back Matthijs de Ligt. Tottenham Hotspur, Manchester City and Arsenal are all reportedly primed and ready to move for the World Cup winner if he becomes available.

With various outlets claiming a deal to bring the Ajax captain to Paris is edging closer, the scramble to sign the 23-year-old France international could be imminent.

Liverpool are believed to be in the market for a versatile centre-back this summer and Kimpembe would tick that box having played at left-back on occasion.

The Reds are long-term admirers of the Frenchman, with interest in the PSG man dating back to 2017. However, with Virgil van Dijk playing in the position the seven-cap international favours, it’s hard to envisage him wanting to move to Merseyside. On paper at least, Jürgen Klopp’s men are ruled out of this potential tug-of-war.

Manchester United, desperately seeking defensive reinforcements, could throw their name into the hat. They have the financial resources to make an attractive proposition and he'd be near guaranteed a place in the starting XI.

To summarise, Kimpembe won't be short of offers. Despite not being a firm favourite of Thomas Tuchel's, the 23-year-old appeared in over 2,000 Ligue 1 minutes last term. When looking at him statistically, it's easy to see why so many Premier League clubs would be interested. 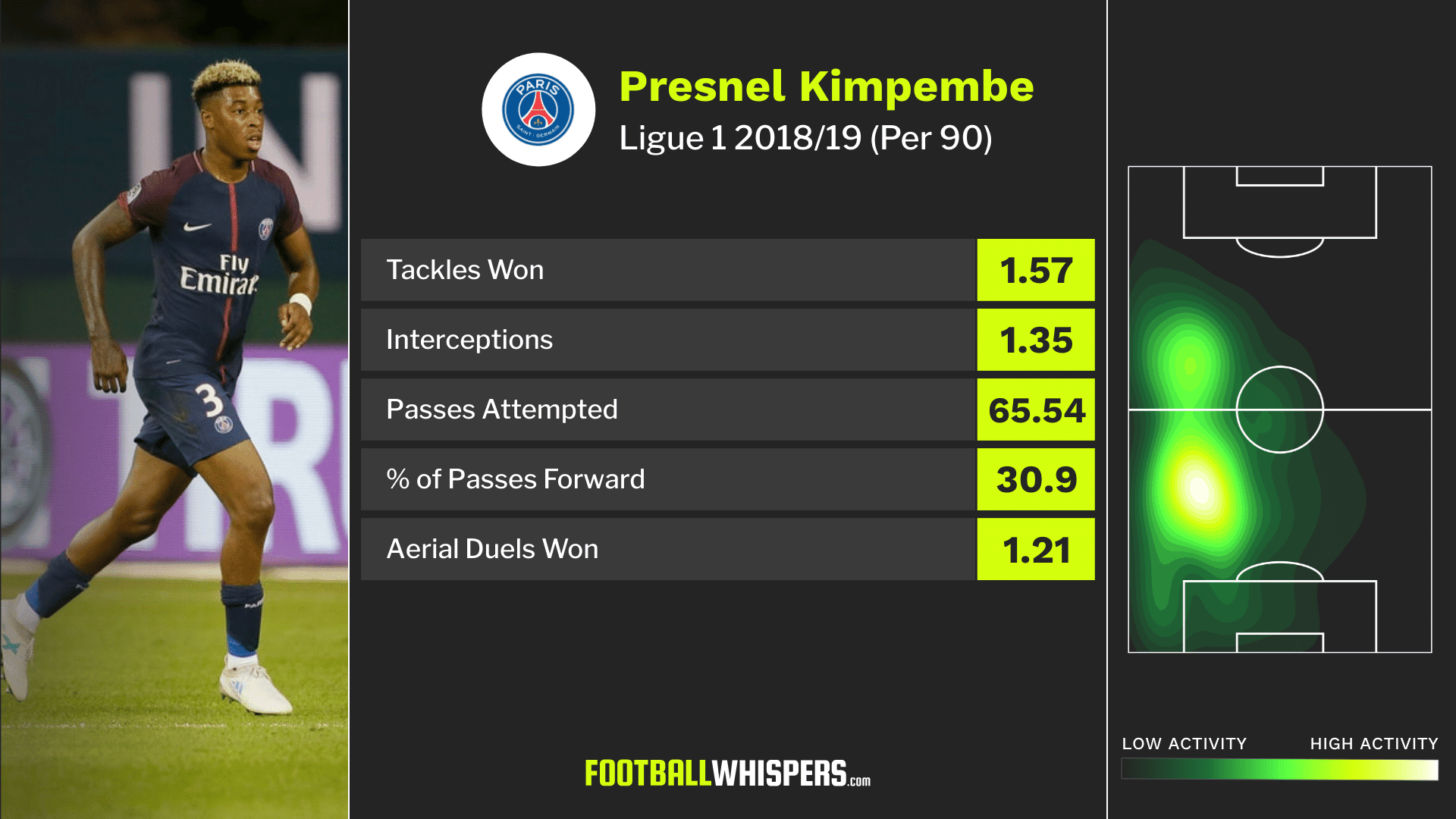 The number of tackles and interceptions attempted hinge on how busy a team is defensively. PSG are the most dominant side in France and are rarely put under sustained pressure. It doesn't mean they aren't as good as others, just they aren't as occupied as players they're being compared to.

Kimpembe is confident on the ball, attempting, on average, over 65 passes on a per 90 basis. Of those, 30 per cent of them go forward. For a bit of context, Van Dijk averages 80 passes with 27.3 per cent of those going forward while Aymeric Laporte plays 35 per cent of his 88 passes forward.

The PSG man would fit into the defence of a team that controls the ball and the game. His heat map suggests this too, with it highlighting the fact Kimpembe often pushes into the middle third and sometimes even further forward. He'd be adept in a high defensive line, the sort used by a number of the top six clubs.

He wins 50 per cent of his aerial duels but he's rarely called upon in the air, averaging just 2.4 duels per 90. It's an area he'd be much busier in if he moved to the Premier League. For context again, Van Dijk competes for over six aerial duels with Lapore averaging 4.5 during the 2018/19 campaign.

That isn't to suggest Kimpembe has to be the aggressor in the air. He could be the sweeper in the defensive partnership, but if that is the case he needs to be paired with someone dominant aerially otherwise it'll be a weakness defensively and in the English top flight, it's the sort the opposition will expose.

The fee will no doubt play a part in which clubs make a move for him.

Arsenal are in need of a starter and Kimpbembe knows Unai Emery. He'd likely start for United but without Champions League football, is there much of an appeal?

City need defensive cover for Laporte and Liverpool could do with someone to give Van Dijk the occasional break. Spurs are planning for life after 32-year-old Jan Vertonghen but that isn't to say the Belgian doesn't still have a part to play in Mauricio Pochettini's first-team plans. Going big on back-up isn't something the Champions League finalists are likely to do.

But if he's available for a reduced fee then the French international is likely going to have a queue at his door as teams look to strengthen their squads.