The Premier League is five weeks old and already the potent attacks of Manchester United and Manchester City are dominating the conversation and the title race.

With 16 goals apiece, the city rivals sit smugly at the Premier League summit and, on the evidence so far, are rightly firm title favourites.

But what of those at the other end of the scale? Crystal Palace, who parted company with Frank de Boer last week, are pointless and goalless after five games – an unwanted Premier League first.

So if United and City are the pace-setters, who are the stragglers? We've crunched the numbers and looked at who the most wasteful teams in the Premier League are at this stage.

It is worth noting that five games is a small sample size but if Palace can sack a manager after four, we can certainly draw some conclusions at this stage. Here's what we found. 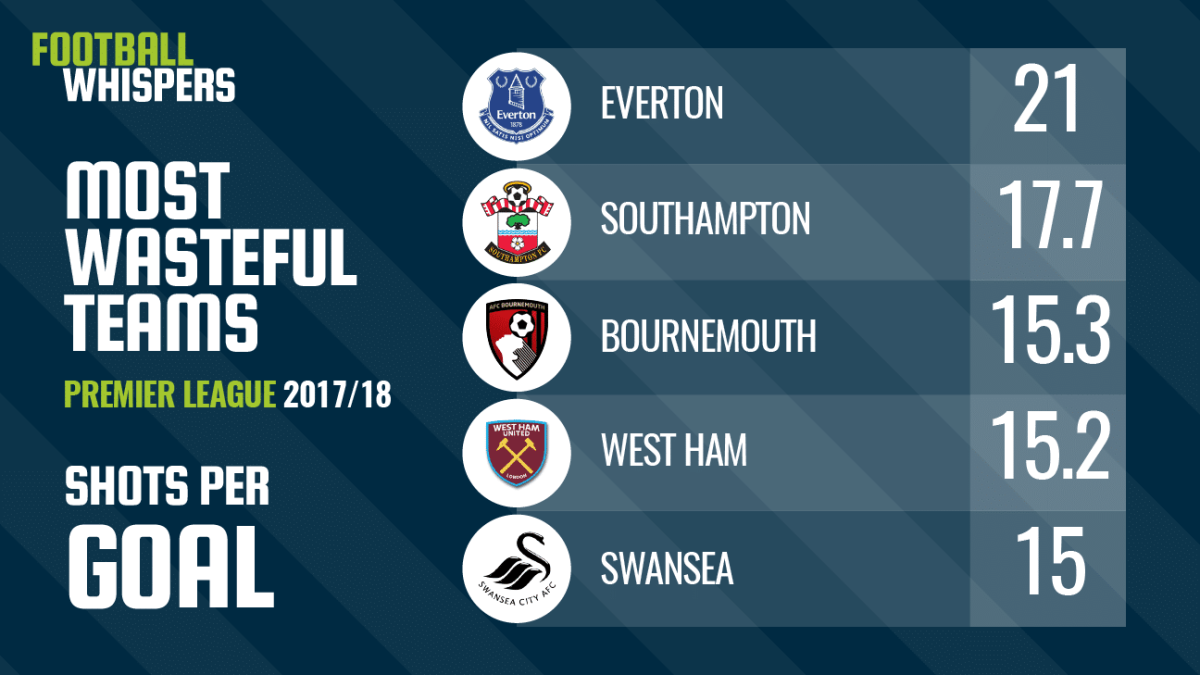 Even after selling Romelu Lukaku to Manchester United for £75million, positivity was in plentiful supply at Goodison Park this summer with Ronald Koeman handed the resources to go on a £130million splurge.

The exciting additions of Sandro Ramírez, Davy Klaassen, Gylfi Sigurðsson and Wayne Rooney were meant to share the goal-scoring burden.

But that is not how it has worked out and the Toffees have just two goals after five games, meaning it's taking them an average of 21 shots to score – the worst ratio in the Premier League.

Looking closely at Everton's numbers their problem becomes clear. They are simply not get getting enough efforts on target – just ten so far, an average of two per game.

Even bottom-of-the-league Palace who, remember are yet to score in the Premier League, are having five efforts on target per game.

The Saints' struggles of last season appear to have spilled into this. Despite finishing eighth and losing the EFL Cup final to a Zlatan Ibrahimović-inspired Manchested United, Claude Puel was dispensed with after a single season.

A lack of entertainment and the style of play were cited for the Frenchman's dismissal and Mauricio Pellegrino was hired from Alavés to liven things up at St Mary's.

But after five games the Saints have scored just four times, meaning they only score, on average, every 17.7 shots. A large part of the South Coast outfit's problem is they are taking nearly as many shots from outside the penalty area as they are in it.

So far this season Pellegrino's men have let from from 18 yards plus on 33 occasions. They have only shot from inside the box 38 times. Those figures suggest they are struggling to break down their opponents and get into better shooting positions.

If Pellegrino is to change that – especially after the early perception of his own management style – he might have to alter the game-plan and encourage his side to get the ball forward quicker. Else it will be another tedious season for Saints supporters.

Four consecutive defeats to open the Premier League campaign were not what Cherries boss Eddie Howe had in mind when he brought Jermain Defoe and Nathan Aké back to the club following successful loan spells.

But that was the reality before the South Coast outfit despatched Brighton & Hove Albion 2-1 at the Vitality Stadium on Friday night, with Defoe netting his first for the club since a loan spell 16 years ago.

Prior to that the Cherries had scored just once – Charlie Daniels' memorable effort in the galling 2-1 loss to Manchester City – and even after their maiden victory they have registered just 46 shots this season, the third fewest in the Premier League.

Josh King – last season's top scorer and reportedly a Tottenham transfer target over the summer – has been particularly profligate. The Norwegian international is averaging 1.8 shots per game yet only hitting the target with 0.4.

Like Everton, the Hammers spent big on their attack this summer. The £16million arrival of Javier Hernández from Bayer Leverkusen and the £20million capture of Stoke City's Marko Arnautović were hailed as good additions.

Yet that fanfare has not translated into goals. Five games in and Slaven Bilić's men have mustered just four from the 42 shots they've taken – an average of 10.5 efforts per strike.

So where do the East Londoners' issues lie? With three shots hitting the woodwork their luck has been out. No other Premier League team has rattled the frame of the goal with such regularity, while only Tottenham Hotspur, United and City have been as unfortunate.

The Hammers put a lot of eggs in a Hernández-shaped basket and, so far, the Mexican has struggled despite scoring twice.

In his peak at Manchester United, Hernández bagged 13 Premier League goals during the 2010/11 season. That year he managed 24 efforts on target and 20 off, but he has been more off (5) than on (4) thus far.

Swans boss Paul Clement was already planning for life without last season's top scorer Fernando Llorente before he moved to Tottenham. A one-time Chelsea transfer target, the Spaniard left a big hole which loanee Tammy Abraham has, thus far, struggled to fill goal wise even if he has impressed.

With just 30 efforts in five games – only seven of those have been on target – Swansea have had the fewest shots in the Premier League.  It is clear, therefore, that they are not only struggling to create but failing to test the opposition keeper.

Perhaps, therefore, the far greater loss is that of Sigurðsson. The Icelandic playmaker laid on 13 assists last season and a total of 26 in his three seasons in South Wales.

Since his £45million move to Everton, creative responsibilities have fallen to Renato Sanches, Sam Clucas and Tom Carroll – none of whom possess the same skillset.

The deadline day return of Wilfried Bony from Manchester City should go a long way to solving Swansea's issues in front of goal. The Ivorian was prolific during his first spell at the Liberty Stadium, rattling in 25 Premier League goals in just 43 starts, even if he has struggled since.