Few can prise open a defence as mercilessly as them.

And while this season has once again seen these creative minds come to the fore, a new breed of playmaker has emerged.

As the Premier League season draws to a close, we present the ten best creators in the division who are 23 and under. We have used the ‘big chances created' stat from the Football Whispers Lab. Players must have featured in at least 1000 minutes.

It's been a frustrating season for Targett, who helped Fulham achieve promotion to the Premier League while on loan at Craven Cottage last season.

The 23-year-old left-back started the season well with an assist for Pierre-Emile Højbjerg but has struggled to nail down a starting role, with just 13 to his name.

He does possess a cracking left foot, though, which helped him notch two more assists before scoring his first goal for the club in the recent 3-3 draw with Bournemouth.

1️⃣0️⃣0️⃣0️⃣@SouthamptonFC's Matt Targett scored the 1000th #PL goal this season – the earliest it's been scored in a Premier League campaign since 1994/95 pic.twitter.com/mWzXCM6aex

It turns out having the best name in Premier League history doesn't guarantee a successful career.

Signed from Malaga in 2016, the Nigerian forward has never fully nailed down his spot in the Watford XI.

He has racked up plenty of appearances and minutes this season, the majority of which have come from the bench. He has still managed to create, however, and recently teed up Abdoulaye Doucouré's goal against Manchester United.

A bit-part player under Javi Gracia, the 23-year-old may be looking for a new club in the summer.

While still raw, City have a promising long-term successor to Sergio Agüero in Gabriel Jesus.

The 22-year-old Brazilian is predominantly an effective poacher but has rounded his skillset under Pep Guardiola.

The four big chances Jesus has created has yielded three assists and, while he has only played a supporting role in City's season, one suspects the South American will only grow in stature as Agüero's time at the Etihad nears its end. 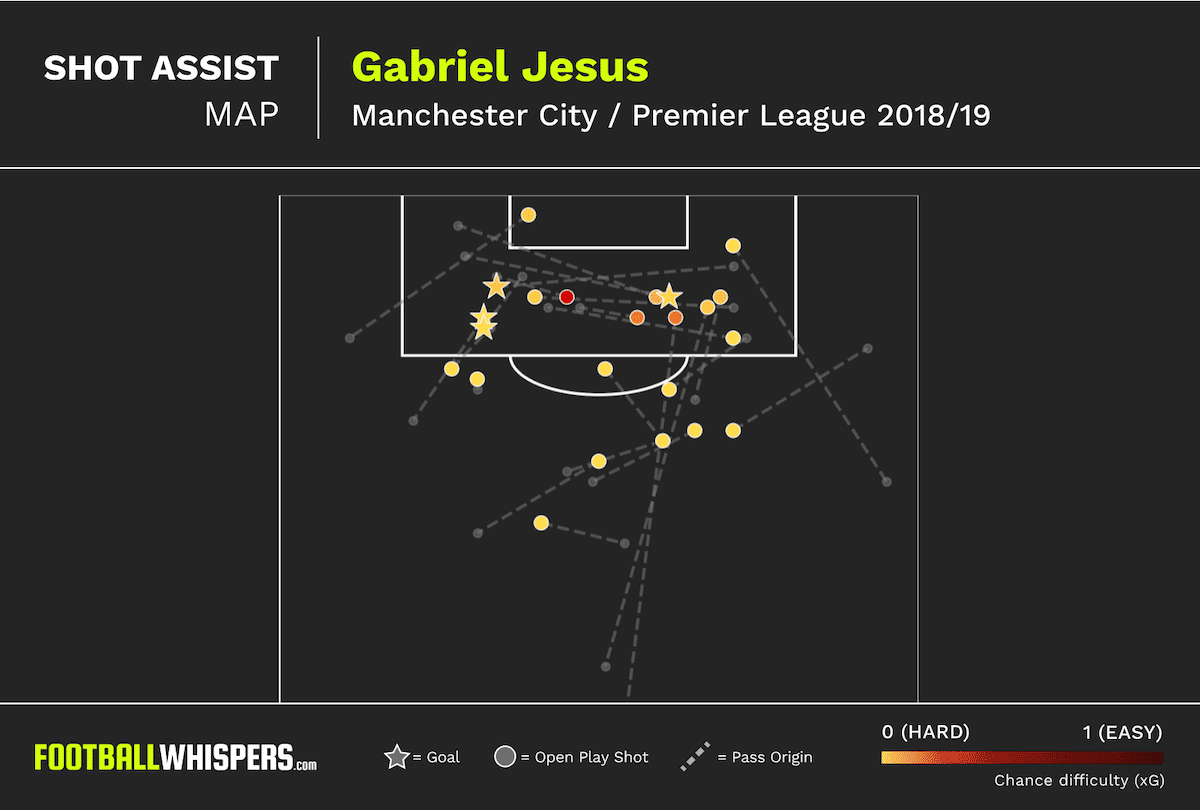 Brooks has been a breath of fresh air at Bournemouth this season. Ryan Fraser may have stolen a lot of the headlines with 14 assists but while the Scot seems destined for a summer exit, there is excitement at the club over what their 21-year-old Welshman can do in the years ahead.

Brooks has created nine big chances overall, notching five assists. With seven fast breaks, he is one of the most potent players on the counter-attack and has chipped in with seven goals.

Shortlisted for the PFA Young Player of the Year as well as being named Welsh Footballer of the Year, another impressive season in 2019/20 and Bournemouth may be entertaining some sizeable offers for the former Sheffield United man.

The 20-year-old has enjoyed an outstanding campaign with Jürgen Klopp's history-chasing Liverpool side.

And while his performance against Barcelona will live long in the memory, Alexander-Arnold has been a wonderful creative outlet throughout Liverpool's Premier League title challenge.

TAA has notched 11 assists in the league – matching the haul of the man on the opposite flank, Andy Robertson – many of which have been delivered via one of his now trademark crosses from the right flank.

Liverpool are relentless when it comes to attacking down the flanks. Alexander-Arnold has been a big part of that.

Jota has built on an excellent loan stint at Wolves last season to become one of the most dangerous forwards in the league, forming a hugely effective partnership with Raúl Jiménez.

With nine goals, the 22-year-old has showcased his finishing skills but it's his awareness and vision that have helped him secure a spot in the top five here.

Jota has created ten big chances overall, which has produced five assists, all of which have been for Jiménez.

Wolves now, understandably, have designs on cracking the top six. Jota will be crucial in achieving that.

All 5 of Diogo Jota's assists for @Wolves this season have been for Raul Jimenez, the most-ever #PL assists exclusively for one player by another pic.twitter.com/sJYvuPoQkM

Like Brooks and Jota, Maddison has comfortably made the leap from the Championship to the Premier League.

The 22-year-old has more than justified his price-tag £20million with a string of influential performances for the Foxes.

Maddison has created 13 big chances overall, with seven assists, five of which have come from open play. One of the Premier League's deadliest set-piece takers, he has also managed 55 shot assists from corners and free-kicks, more than any other player.

A penetrative passer, the England U21 international has attempted 23 through balls this term, making him the ideal creative mind to spot Jamie Vardy's trademark runs in behind the opponent's backline.

After an impressive debut season in England's top flight, Maddison looks destined for an illustrious career for both club and country. 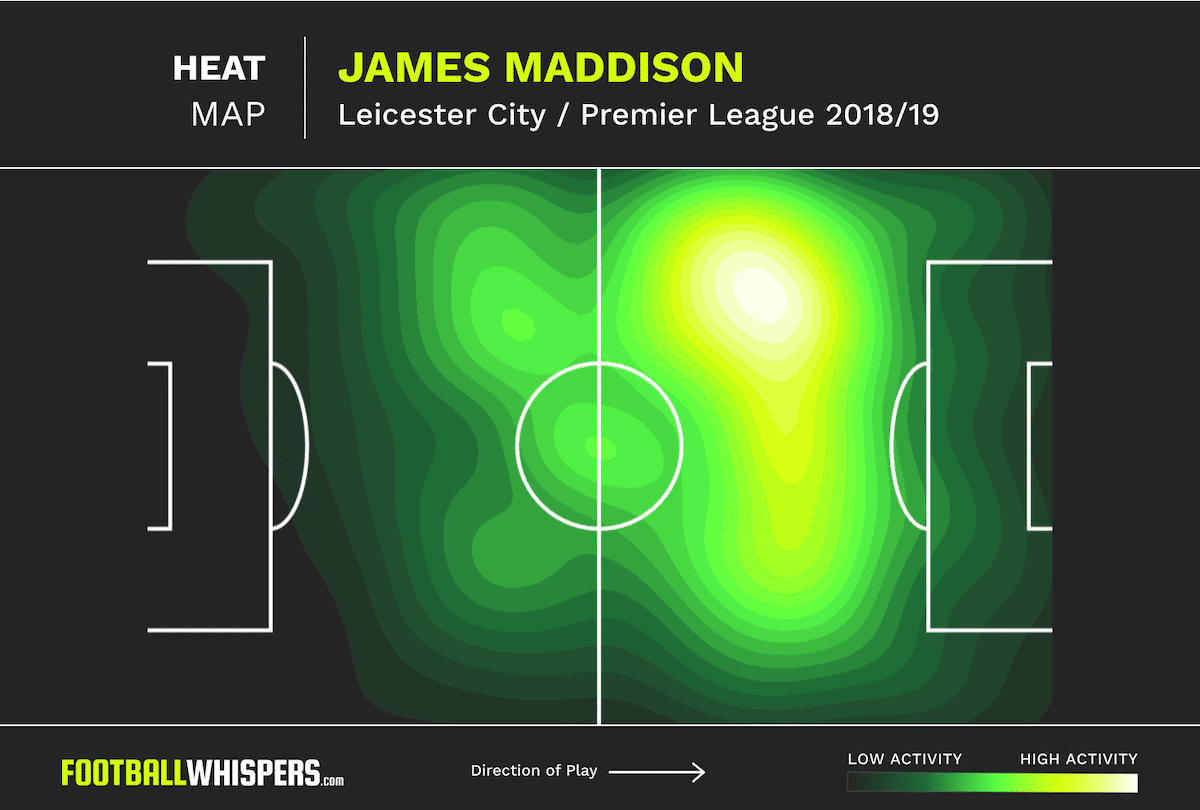 The Nigerian, who just celebrated his 23rd birthday, has flown under the radar at times for Arsenal this season.

While he hasn't produced his best form of late, there have been glimpses throughout Emery's first season that Iwobi has the natural ability to become a hugely influential figure at the Emirates.

He is creative, but he needs to be consistent.

Like his teammate Jesus, Sané will be disappointed at not having played a more prominent role under Guardiola this season.

Even if he starts Sunday's climactic league clash with Brighton & Hove Albion, he will have started five fewer games than the 2017/18 campaign.

But more time on the bench has not blunted Sané. The German winger has scored ten goals and added the same number of assists. Nobody has notched assists as regularly as his 0.48 per 90.

One of the deadliest wingers in world football when he's on top form, it will be interesting to see how Sané progresses at City next season.

Matching Sané is Tielemans, who has proved to be an excellent addition to the Leicester line-up since joining on loan from Monaco in January.

The Belgium international, who has just turned 22, has slotted seamlessly into the Foxes' first-team and is likely to attract interest from top-six clubs this summer. 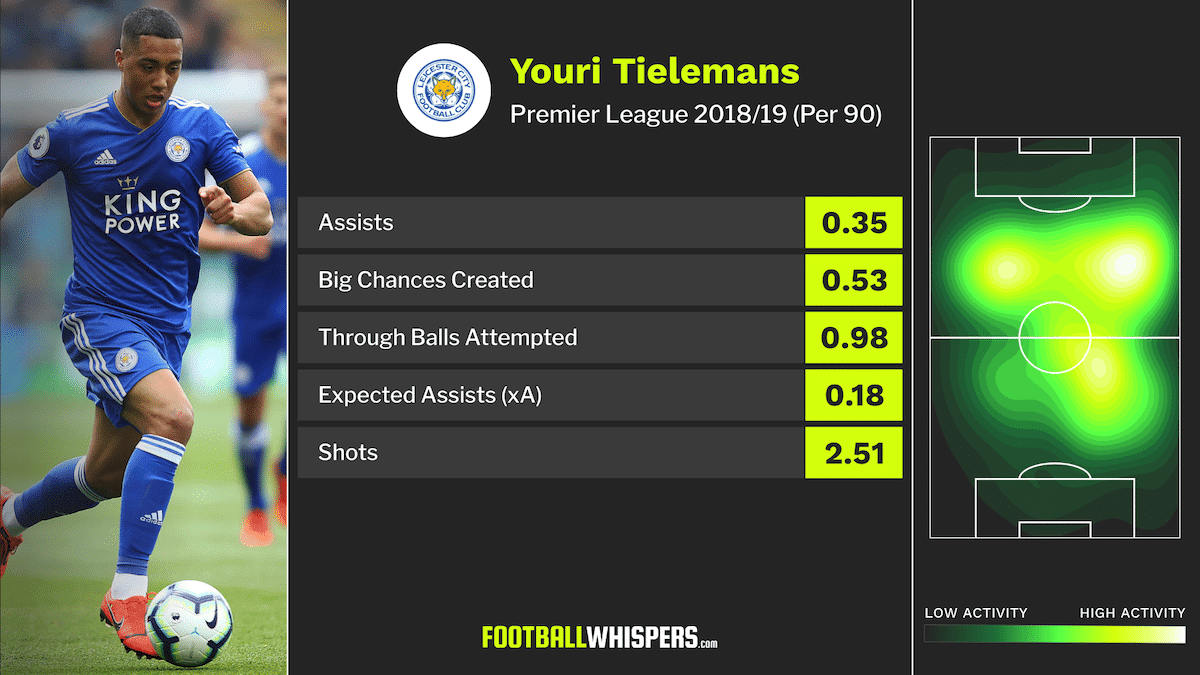 Having already created six big chances with four assists, it's not difficult to see why. Tielemans is incredibly adept at finding space between the lines and playing the killer pass. Although his career stagnated somewhat in Ligue 1, he already looks supremely comfortable operating in the Premier League.

His performances have seen him become a fan-favourite at the King Power Stadium. Brendan Rodgers is keen to tie him down on a permanent deal, but warding off interest from Champions League clubs will be a big ask.