The 2018/19 Premier League season has passed the halfway point. With 20 games played, Liverpool are sitting pretty at the top, seven points clear of champions Manchester City ahead of their top-two showdown at the Etihad on Thursday night.

As you would expect, some of Jürgen Klopp's title-chasers feature high in a number of the major stats categories. After all, they have won the most matches and conceded the fewest goals this season.

But there are plenty of Premier League stars enjoying a rich vein of form, stretching back to the start of the calendar year.

Here, we delve into the Football Whispers Lab to unearth the statistical stars of 2018.

Perhaps unsurprisingly, Mohamed Salah sits at the summit of the expected goals chart for 2018.

The Liverpool forward, who is currently demolishing any tentative suggestion that he was going to be a one-season-wonder, struck 28 league goals during 2018 (only Exeter City striker Jayden Stockley, with 29, has more).

However, if we adjust the metric to make it expected goals per 90, the results are somewhat more intriguing. 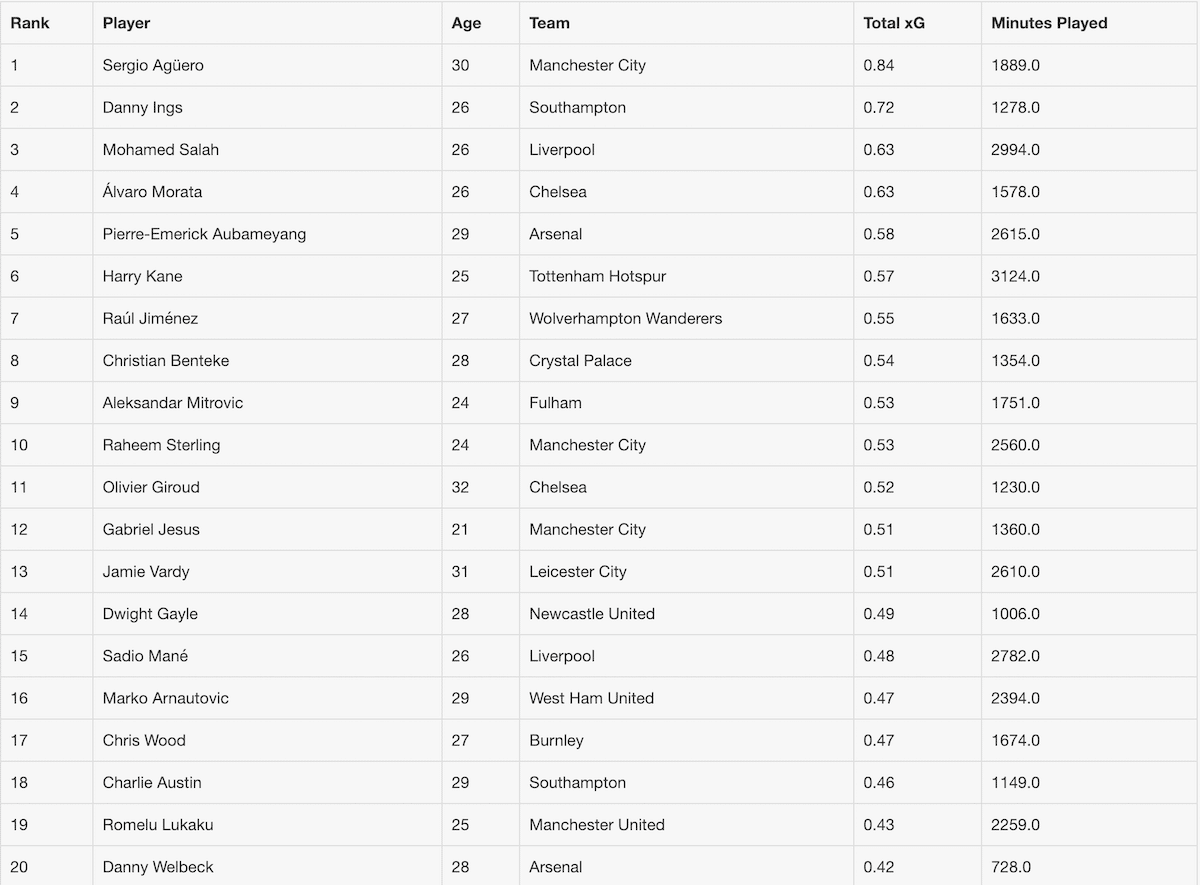 Although Salah still features in the top three, it is Manchester City's Sergio Agüero leading the way with a hugely impressive 0.84 per 90 after 1889 minutes played.

Danny Ings is the surprise entry in second, having managed 0.72 xG per 90 from 1278 total minutes. The former Burnley and Liverpool frontman has injected some much-needed new life into the Southampton attack this season, with seven goals in 14 appearances.

If we compare the chart above with goals per 90 (shown below), several of the usual suspects are there once again. Agüero has slightly outperformed his xG with an average of 0.85 goals per 90, while Salah comfortably surpassed his 0.63 xG with 0.84. 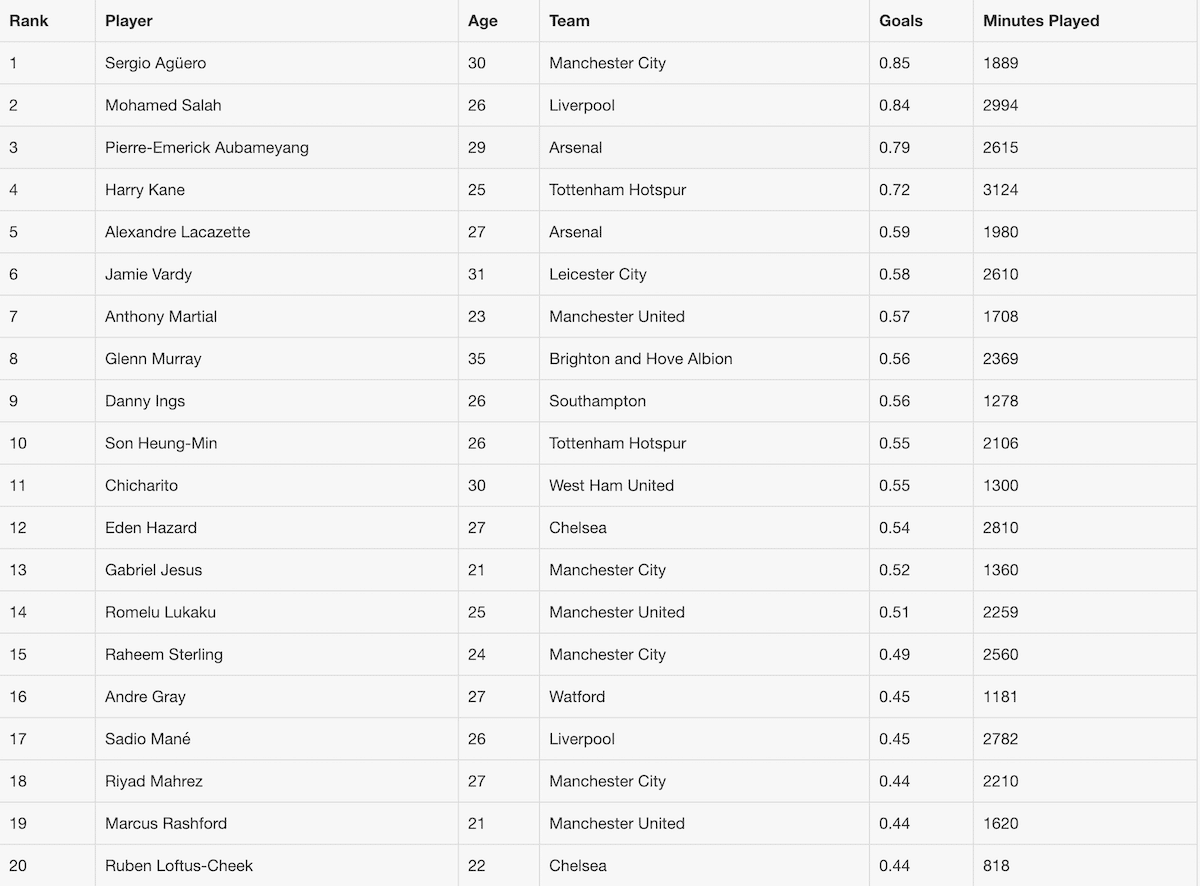 Brighton's Glenn Murray deserves a special shout-out. Far older than any other player in the top 20, the 35-year-old has regularly delivered for Chris Hughton's Seagulls. Murray is also way out in front in fouls committed this season, with 52, 19 more than the next man down, James McArthur.

Switching the focus to the more creatively inclined players, the expected goals assisted standings for 2018 brings few surprises. Kevin de Bruyne, imperious during City's march to the title last season, leads the way with 0.43 per 90 but he is closely followed by his teammate, Raheem Sterling, who managed an average of 0.4. 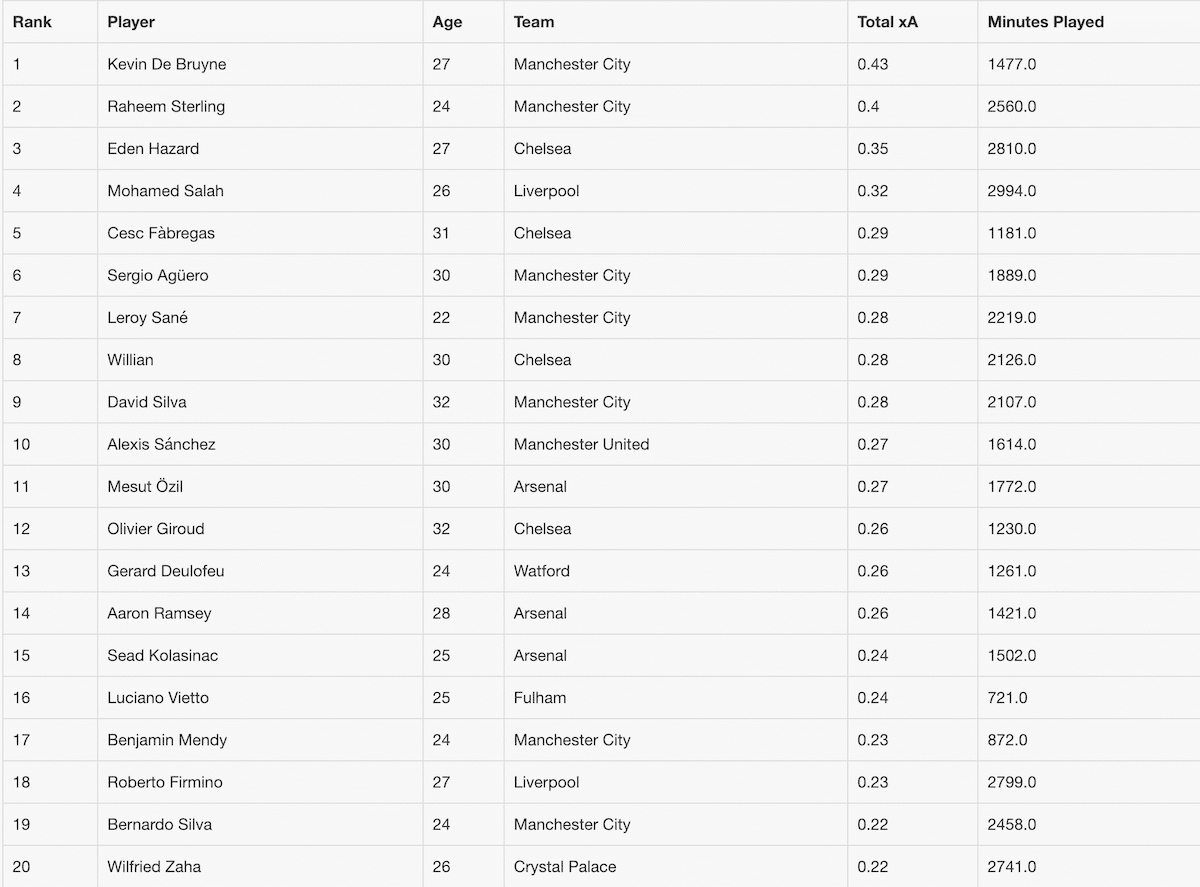 Despite a thoroughly disappointing first year at Old Trafford, Alexis Sánchez still managed to crack the top ten with an xA per 90 of 0.27, matching Arsenal's Mesut Özil.

What's impossible to ignore here is the prominence of Manchester City players. Pep Guardiola's team have seven in the top 20 compared to just one from their city rivals United, two from Liverpool and three from Arsenal.

De Bruyne has missed a healthy chunk of the current campaign through injury but, when he plays, he is generally the most creative player around.

Hazard's place atop the successful take-ons category is no great revelation either. With an average of 4.61 per 90, the Belgian is way out in front, with teammate Ruben Loftus-Cheek the nearest to him with 3.85, having only played 818 minutes though (Hazard has played 2810).

Wilfried Zaha has managed 3.48 per 90, too, while Michail Antonio and Leroy Sané make up the top five. To some, it may be surprising to see Sterling as low as 20th but that is a reflection on how his game is now based primarily on getting into scoring positions as opposed to beating full-backs, a highly fruitful alteration made under Guardiola's tutelage. 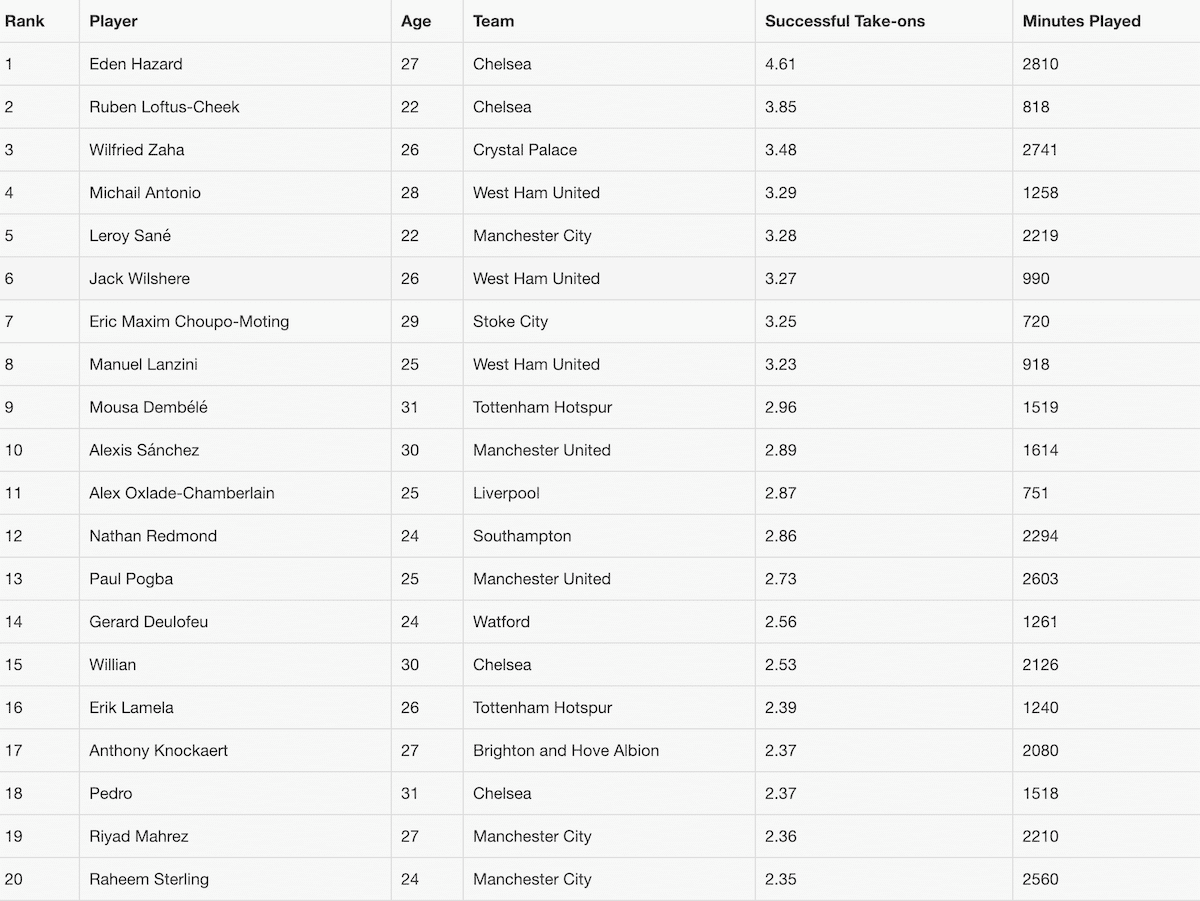 When it's come to shooting, Kane and Salah can barely see the rest in their rearview mirror. Kane has a total of 132 scoring attempts in 2018 with Salah managing just two fewer.

But next on the list, Paul Pogba, didn't crack 100, with 95, a number matched by Agüero. It's quite surprising to see Romelu Lukaku so far down. The Belgian is 35th having managed just 54 scoring attempts in 2259 minutes. That's just one more than Jesse Lingard, who has played 279 minutes fewer than his teammate.

Agüero is the most shot-happy Premier League star per game, averaging 4.52 per 90.

An eclectic range of players feature in the tackling table. Newcastle enforcer Mohamed Diamé has completed more tackles than any other player in 2018 with 127. Leicester's Wilfred Ndidi is second with 116 while Idrissa Gueye, another skilled ball-winner, follows closely with 114.

Aaron Wan-Bissaka, who is attracting plenty of praise at Crystal Palace, features as high as fourth having landed 99 tackles in 2323 minutes. The talented 21-year-old right-back averages 3.83 tackles per 90, putting him ahead of Diamé (3.51), Ndidi but just behind Gueye (4.09).

As for aerial battles, a trio of imposing frontmen make up the top three, with Troy Deeney (195) and Sam Vokes (199) behind Steve Mounié, who boasts a mightily impressive 214.

Meanwhile, Manchester City stopper Ederson, regarded as one of the club's shrewdest signings in recent years, completed 90 minutes on 35 occasions. The Brazilian conceded 29 goals but against an expected 26.40, giving him a ‘saved' total of -2.60.

Alisson, the man keeping Ederson out of the Brazil line-up, has continued the excellent form that convinced Liverpool to fork up £66.9million for his services from Roma. The 26-year-old conceded just eight goals in the Premier League in 2018 against an expected 15.53, meaning he saved 7.53.

Also performing impressively in the Premier League are West Ham keeper Łukasz Fabiański and Martin Dúbravka of Newcastle, who saved 7.82 and 7.88 respectively.