It had been a downward spiral for Fulham ever since the 2010 Europa League final.

The run to the final in Hamburg was stuff of dreams, and although they lost to Atlético Madrid, it was a season that will long live in the memory of any Whites fans, with Roy Hodgson always given a hero’s welcome at Craven Cottage.

It went wrong soon after. Mark Hughes, Martin Jol and René Meulensteen all took the reins of the side by the Thames, each of whom was slightly worse than their predecessor. But it was under Felix Magath's guidance that the club eventually slid out of the Premier League and into the Championship in 2014.

Despite relegation the club stuck with the German, who talked about leading them back into the top flight at the first attempt. He even joked that wantaway striker Kostas Mitroglou could be playing Champions League football in two seasons time if he stayed at Craven Cottage.

Unsurprisingly the man who told Brede Hangeland to rub cheese on his leg and call his mother to help him recover from a muscle injury didn’t last long. He was sacked with Fulham bottom of the Championship after seven games, with just one point.

That set the tone for the Whites in the second division of English football – it was all about struggle.

Magath’s seven months in charge set the club back years, and while his replacement Kit Symons steadied the ship, he wasn’t able to take them anywhere near the top half and was sacked in early November 2015.

Fulham took nearly two months to replace him, eventually appointing Slaviša Jokanović at the end of December of that year.

“While the search was time-consuming and painstaking at times, I knew that when the process was complete that Fulham would have the best man possible for this opportunity and challenge,” said chairman Shahid Khan at the time.

Since arriving at Craven Cottage, he has slowly revolutionised the Whites from relegation candidates to a Premier League side.

Given his pedigree in previous jobs, what the former midfielder has achieved is no surprise.

Jokanović's playing career saw him spend seven years in La Liga with three different clubs, appearing in 208 matches and scoring 31 goals, mainly for Tenerife. He joined Chelsea towards the end of his career, as well as representing Yugoslavia at the 1998 World Cup and Euro 2000.

But it’s been in his managerial career where he has really shone.

He started off at Partizan Belgrade, winning the double in both 2008 and 2009. But in September 2009 he left the post by mutual consent – perhaps the first sign that he may not always see eye-to-eye with the hierarchy at the club he works at.

It took the Serbian a while to reappear in management, and it was a surprise when he ended up in Thailand in February 2012, taking Muangthong United to their third Thai Premier League title and going unbeaten in the process.

Brief spells at Levski Sofia and Hércules then followed, before he returned to England with Watford.

When he took over at Vicarage Road in October 2014, he was the Hornets’ fourth coach in five weeks. Despite seemingly coming into chaos, he overcame a bad start to lead them to the Premier League with a game to spare.

His gruff tone and often serious manner can make him a nightmare for journalists who want quotes, but when he feels like it, he can come out with some real corkers.

While at Watford he declared: “This job is not for pussies (weak people), it is a job for real men.”

Despite his success at Vicarage Road, he failed to agree a new deal with the Hornets and left that summer, with Quique Sánchez Flores being the man the Pozzos decided to take them into the top flight of English football. 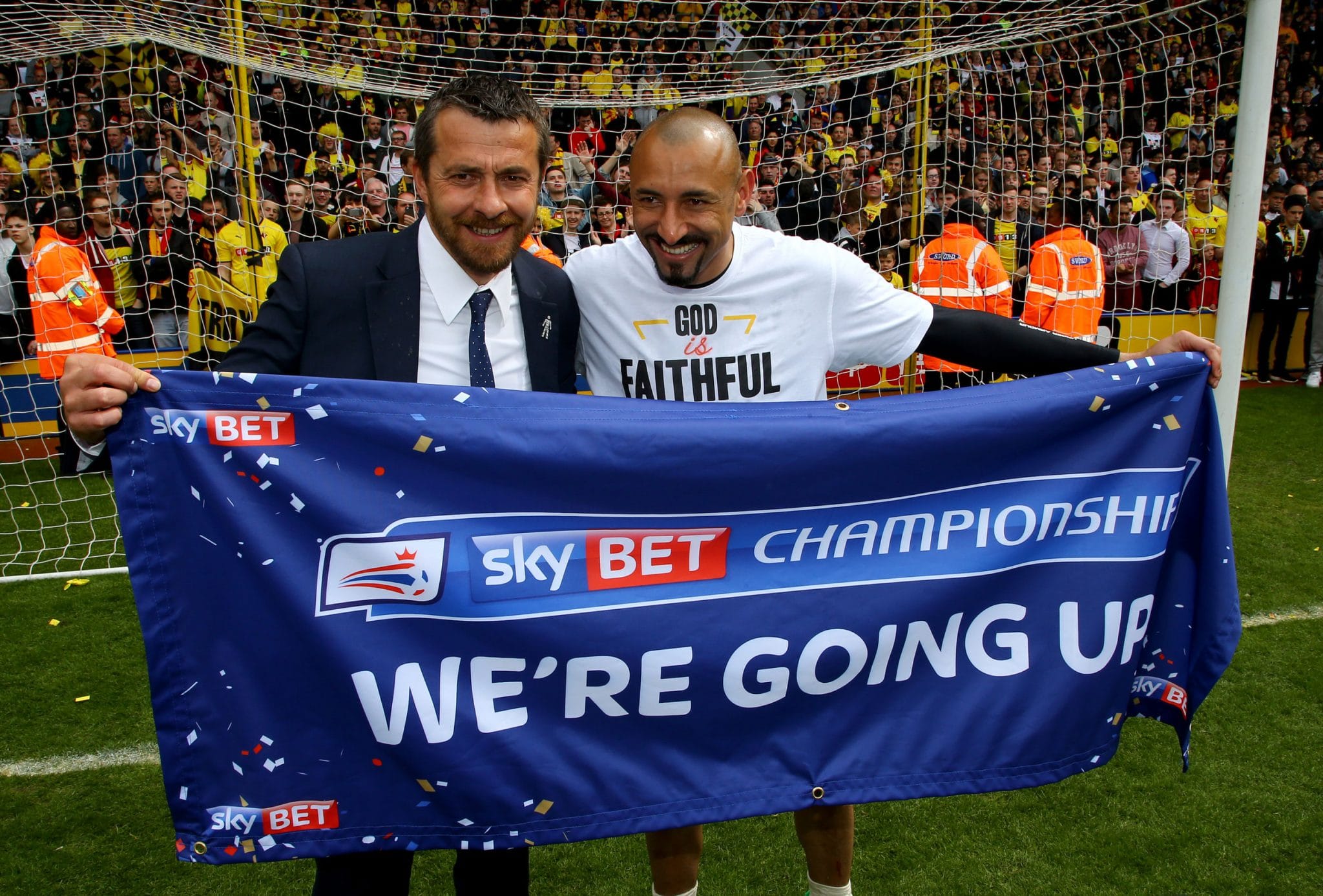 Just a few weeks after departing Watford, he was appointed Maccabi Tel Aviv head coach, and continued his impressive managerial record, taking them into the Champions League group stage for the first time in 11 years after victory over Basel.

And after six months in Israel, he once again returned to England with Fulham.

His first season was about keeping the Whites up. After having no manager for two months, the club was in disarray and it was hard for Jokanović to properly make his mark with Fulham finishing 20th.

When they lost top scorers Moussa Dembélé and Ross McCormack in the summer of 2016, they were among the bookmakers’ favourites to go down. But the Serbian came into his own and the Whites have been transformed.

They finished sixth last season, losing to Reading in the playoff semi finals. But Fulham could go one better in 2017/18 and are in contention of finishing second in the Championship after an incredible unbeaten run stretching from December to April.

The Serbian has employed a 4-3-3 to much success, with the Whites making the most passes and having the most possession and best passing accuracy over the past two seasons.

Fulham simply pass their opposition off the pitch. They know when to play the ball at the back and when to break at lightning pace.

He has seen the strengths in his squad and built around them. When Jokanović arrived Tom Cairney was often being used as a winger by Symons. Now he’s been transformed into one of the best central midfielders in the league, dominating the game and dictating the tempo.

Ryan Fredericks is one of the quickest players in the division and he and fellow full-back, January loan signing Matt Targett, are crucial to the Fulham’s attacks. They push forward with Cairney, Stefan Johansen and Kevin McDonald often picking them out in wide positions from the middle of the pitch.

When Antonio Conte arrived a few miles down the road at Jokanović’s old club Chelsea two summers ago, he declared himself a tailor. The Serbian isn’t too different. He adapts to what he thinks is best for the side.

“I always played with two strikers at Watford,” he told The Independent. “Because my best players were strikers: Troy Deeney, Odion Ighalo, Matěj Vydra and Fernando Forestieri. The team was really clinical.”

But this Fulham team is different, more about possession and controlling the midfield.

“With these players I have in my hand right now, we take the decision to play in this way,” he added. “Because I believe we are more safe with the ball than we are without it. We believe we can dominate the opposition with the ball.

“We are not the strongest, tallest team in the Championship. We miss the set pieces, we need to win some points in this situation, but we don’t do it.”

Despite that his time at Fulham hasn’t been plain sailing. He's fallen out with the board on numerous occasions over their transfer policy.

Fulham’s director of statistical research Craig Kline had too much say over arrivals at Craven Cottage. He was a close friend of director of football operations Tony Khan and was bizarrely given control of transfer policy.

Using his own algorithms, Kline pulled the plug on smart loan signings – such as Andreas Pereira – only to make bad ones, much to Jokanović’s frustration.

Even despite the American leaving in November, the Fulham boss told the board to back him or sack him in January.

They decided to do the latter and brought in three players he wanted; Cyrus Christie, Targett and Aleksandar Mitrović. Since then the Whites haven’t lost.

Given how he’s able to adapt and have success at nearly every club he’s been at, it’s no surprise to see bigger sides than Fulham interested in Jokanović, even if he can go public after a falling out with the board.

He’s been heavily linked with West Ham United in the last 12 months, while there has also been talk of a sensational return to Chelsea when they finally get rid of Conte.

It would be a massive surprise to see Roman Abramovich appoint a manager from the second tier of English football though.

That’s not to say the Serbian won’t be managing in the Premier League next year. He will hope it will be with Fulham, but should they fall just short, it would be no surprise to see Jokanović move into the top flight.

The 49-year-old's career trajectory so far suggests he’ll fly when he gets the chance, and it may not be too long before a move to a club like Chelsea doesn’t sound so ridiculous.