While playing football at a high level is no prerequisite for coaching the game, it can help. Pep Guardiola, Zinedine Zidane and Antonio Conte are just a few former playing legends who are thriving in management with their tactical nous and teambuilding capabilities. Over the last two years, Patrick Vieira has joined them on this list.

The Frenchman was the driving force in Arsenal’s midfield throughout the late 1990s and early 2000s, providing a thrilling combination of technique, energy and aggression. He helped Arsène Wenger’s side to multiple Premier League titles and FA Cups before moving on to Italy. Eventually he returned to England with Manchester City, retiring at the end of the 2010-11 campaign.

Immediately upon hanging up his boots, Vieira took up a coaching role with the club. After four years in a couple of different positions, including the role of Elite Development squad manager, he was appointed head coach of New York City FC, one of the newest clubs to join Major League Soccer. Initially criticised for his lack of experience, the odds were against him from the very beginning. But, in under three years in charge, he has crafted one of the finest teams in MLS.

Currently three rounds into the 2018 season, New York City sit top of the Eastern Conference. They have won all of their opening games, scoring six goals and conceding just once. The promising start has only fuelled expectation that this will be another hugely positive campaign for the club after two years of constant improvement.

In their maiden year, they missed the play-offs by 12 points. Then Vieira came in. In his first year in charge, the club finished second in the Eastern Conference to secure a play-off spot. They finished in the same position last year, only with more wins and less goals conceded.

Vieira’s results so far have been extremely good, but even more impressive is the tactical identity he has brought to the club. Playing in the same light blue and coming under the City Football Group umbrella, there is an expectation that New York City play a similar game to that played by Guardiola’s Manchester City. While that is a difficult task, the two teams do share a number of traits.

Firstly, they are both committed to playing out from the back. This is something Vieira made a priority upon his arrival in MLS, stating: “The way that I want to play the game in my mind is that we have to control the game, we will have the ball. We can concede but we will create more than we will concede.”

Secondly, both teams are aggressive defensively, looking to press and counter-press their opposition high up the pitch. This is an aspect Vieira has worked hard to bring to New York City over the last few months in particular, something winger Rodney Wallace confirmed after their most recent win. “That’s going to be our DNA going forward,” he said. “Hard work and the press from the front, which is going to allow us to have the ball more and ultimately create chances and put the ball in the net.”

Vieira’s desire to have his team adhere to a certain style hasn’t always worked out, and it has taken time for all of his ideals to be instituted. Indeed in his debut year, with a team including ageing stars such as Andrea Pirlo and Frank Lampard, it was not viable to have his side defend aggressively high up the pitch due to a lack of pace in midfield. There has also been the occasional bruising defeat – none more so than the 7-0 thrashing inflicted by nearby rivals New York Red Bulls in 2016 – but the former Arsenal man has refused to give up on his principles.

He generally lines his side up in a 4-3-3 or 4-2-3-1 shape. David Villa leads the line, with two wingers – usually Wallace and new addition Jesús Medina – offering support from either side. Maxi Móralez is the most fluid piece of the puzzle, with the Argentine able to fit in on the right, at No.10, or in a more withdrawn central role. Where he starts usually depends on the requirements for the upcoming game.

Alexander Ring has superseded Pirlo in the deep-lying midfield role, with Vieira instructing him to drop deep between the two centre-backs either to form a triangle or a central defensive three that offers numerical superiority and enables them to play out more effectively against an opposition front two. Yangel Herrera, who is on loan from Manchester City, will then take up a slightly higher position, where he may be joined by Móralez.

Vieira’s two full-backs stay fairly deep to offer support to the centre-backs during the early stages of build-up, but will then drive forward to take up high and wide positions as the attack progresses. This allows the wingers, Medina and Wallace, to come infield and try to overload the centre alongside Villa and Moralez. These movements help New York City to play vertically through the middle of opposition pressure.

Their attacking play is highly mobile and this was never more evident than in their recent victory over Orlando City, in which the front three rotated positions on a frequent basis between – and sometimes during – offensive moves. However, their intense pressing and counter-pressing stole the show.

As seen in the below graphic, any backwards pass from the opposition instigated a collective shift up the pitch. Here the front three and Herrera can be seen moving up to pressure, while the defensive line settles just underneath the halfway line. 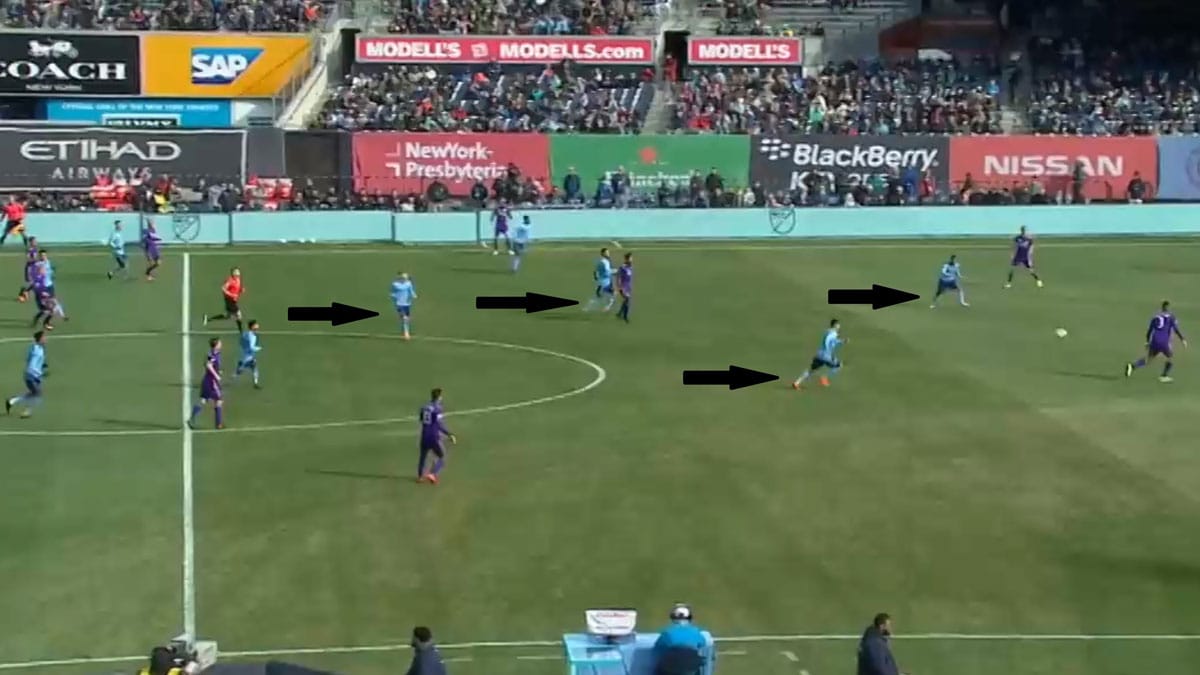 In the defensive phase, Vieira generally wants his side to cut off the opposition passing lanes. This means not only pressuring the player in possession, but taking away any nearby options by occupying the lanes between the ball-player and his nearest team-mates.

Against Orlando City, this was combined with a similarly aggressive approach in defensive transitions. NYC FC pressed immediately upon losing possession high up the pitch, suffocating the opposition and forcing them to get rid with aimless long balls. An example of this is seen below, where their counter-pressing involves six men getting close to the ball-player after a turnover. 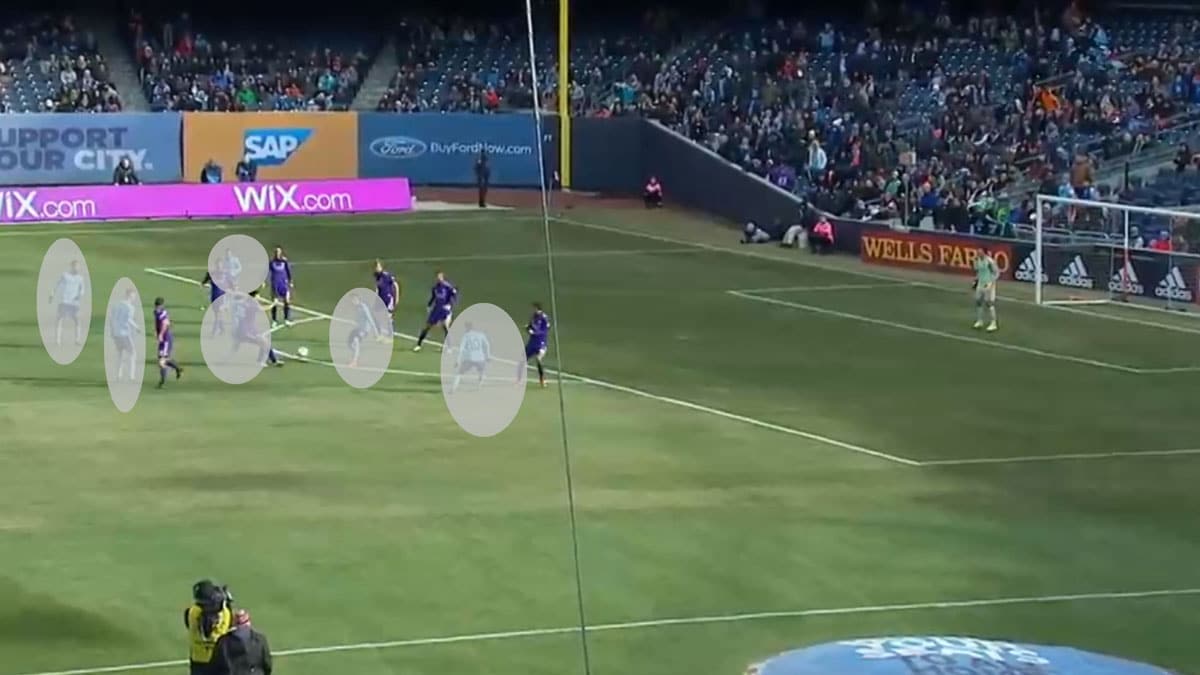 This defensive development will only help Vieira’s side to obtain more of the ball, something that has been emphasised since he came in. In each of the last two seasons, New York City have finished among the top teams in MLS for possession and short passes. This looks set to be the case again in 2018 – already they are in the top five for both statistical categories.

Vieira’s ability to implement his philosophy with such clarity is only made more noteworthy by the limitations he has to work under in MLS, where there are imposed limitations relating to squad size and spend. This forced the Frenchman to work within a strict budget and to maximise the resources he has available.

So far the most obvious example of his talent development is Jack Harrison. The Englishman was let go by both Manchester United and Liverpool as a youth before making his way to the United States. Vieira made sure to sign the player when he first arrived at New York City and, after a 2017 campaign that saw the 21-year-old winger score 10 goals, he joined English Championship side Middlesbrough on loan.

MLS has been a steep learning curve for Vieira, but he has handled the whole process well. Each year he has improved his side through subtle tweaks, gradually bringing about a proactive style of defending and an attacking game based on building through the thirds with patience and penetration.

It’s the sort of football that would suit a number of Premier League clubs. Unsurprisingly, this – along with his past links – has seen Vieira’s name crop up in the discussion over who should replace Wenger at Arsenal. He hasn’t ruled out the possibility of returning as coach, telling L’Equipe: “Let's say that someday it might interest me.”

At just 41 years of age, Vieira is young for a manager, so there is no rush for him to leave New York. However, when the time is right, his tactical ideas, adjustments and ability to get the best out of his players are qualities that would allow him to have a second great career in English football.