Perhaps this isn’t the way Nuno Espírito Santo envisioned getting to coach in the Premier League, but that doesn’t really matter. His Wolverhampton Wanderers side now sit nine points clear at the top of the Championship, having extended their lead with a win away at second-placed Cardiff City on Friday night.

Speaking to The Guardian’s Sid Lowe in 2016, the Portuguese manager could see England’s top tier on his horizon. “I love watching the Premier League. One day I am going to coach there, I am sure of it,” he said. “I love it, I want to be there. If it takes longer, I don’t know. If it takes less, maybe. But one day.” 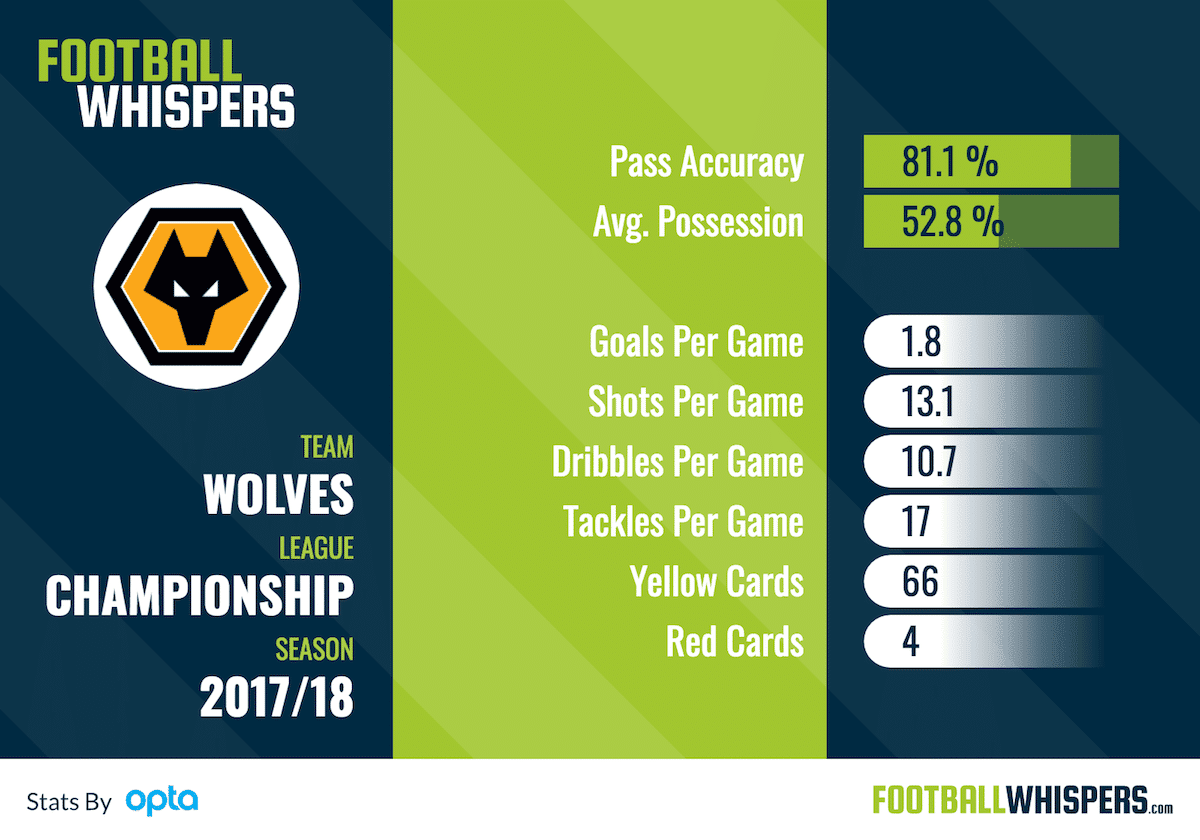 That day appears to be nearing, and the Premier League would be wise to take note. Wolves don’t just have serious financial backing – the sort that enabled them to sign highly rated midfield prospect Rúben Neves from Porto for £16million – but in Santo they have a respected young coach who has impressed in spells in various leagues across the continent.

At just 44 years of age and with less than six years in management, Santo has already led clubs in his home country, Spain, and now England. Along the way he has achieved plenty. He took perennial strugglers Rio Ave to one sixth-place league finish and two cup finals during his two years in charge, before breathing life into a Valencia side that had been mired in La Liga’s mid-table.

Despite guiding Los Che to fourth spot in his only full season as head coach, he chose to resign after a poor start in 2015/16. He then returned to Porto, where he had two spells as a player. Despite improving the club’s league position and getting them into the Champions League knockout stages, he was dismissed due to a lack of silverware.

Santo counts Jesualdo Ferreira and José Mourinho among his coaching influences, but his understanding of the game was also enhanced by his playing position. Few goalkeepers become top-level managers in modern football, perhaps because their role is seen as being too specialised to comprehend the tactical details necessary elsewhere on the pitch. However, Santo believes his position benefitted him.

“You see the game from the best place,” he told Lowe. “All the analyses I do even now are from a camera behind the goal…This gives you a real view of the game as players see it. A player never experiences the game from the side.”

Outsiders are free to disagree with Santo’s method, but they can’t dispute its results. His Wolves side have won 27 of their 41 league games this season, playing some of the most entertaining football outside of the Premier League along the way.

What is most encouraging is the manager has a clear understanding of what he wants, something backed up by the fact his current charges operate similarly to his old Valencia side in the way they press, counter, and attack.

In a piece for The Coaches Voice, he stated that his first thought when considering whether to work in the Championship was: “Can I make my idea work in this league?” On the evidence available so far, the answer to this question is a resounding ‘yes’.

Santo’s Wolves line up in a 3-4-3 shape that becomes a 5-4-1 when defending. The inside forwards, two of Ivan Cavaleiro, Hélder Costa and Diogo Jota, are pivotal in the team’s pressing, specifically in their positioning.

As seen in the screenshots below, they often take up higher vertical positions than the central midfielders, but nonetheless remain horizontally close. This means they are easily able to do one of two things: move up to press the opposition defenders, or drop back to form a compact midfield four. 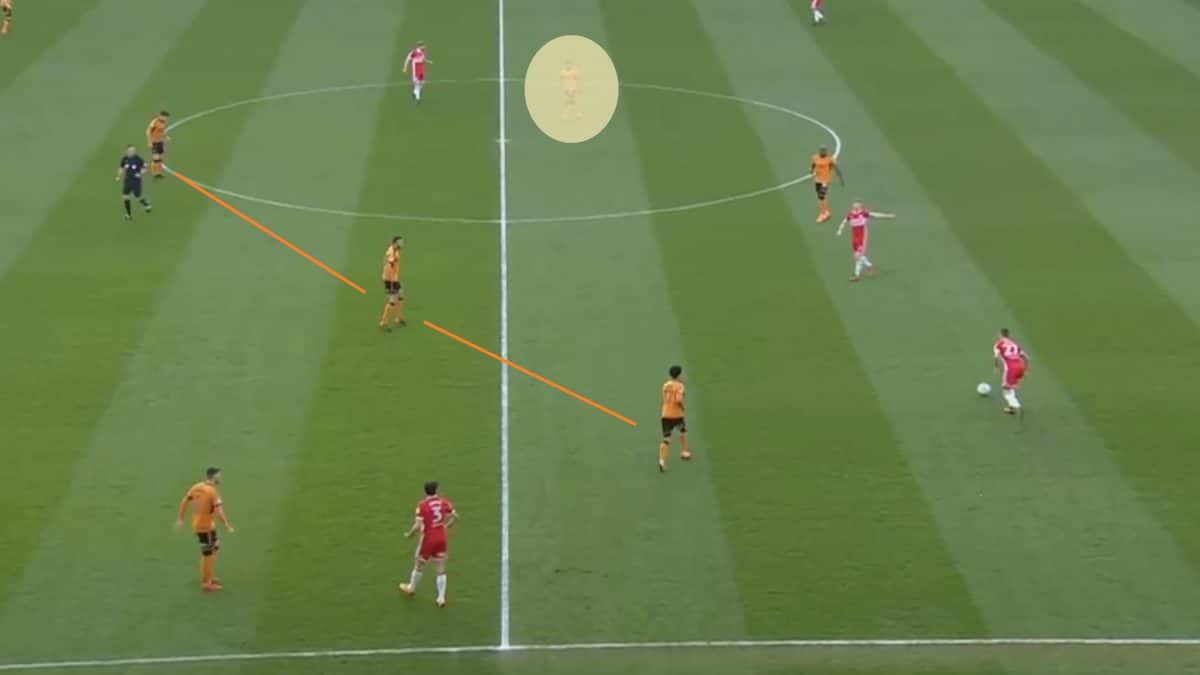 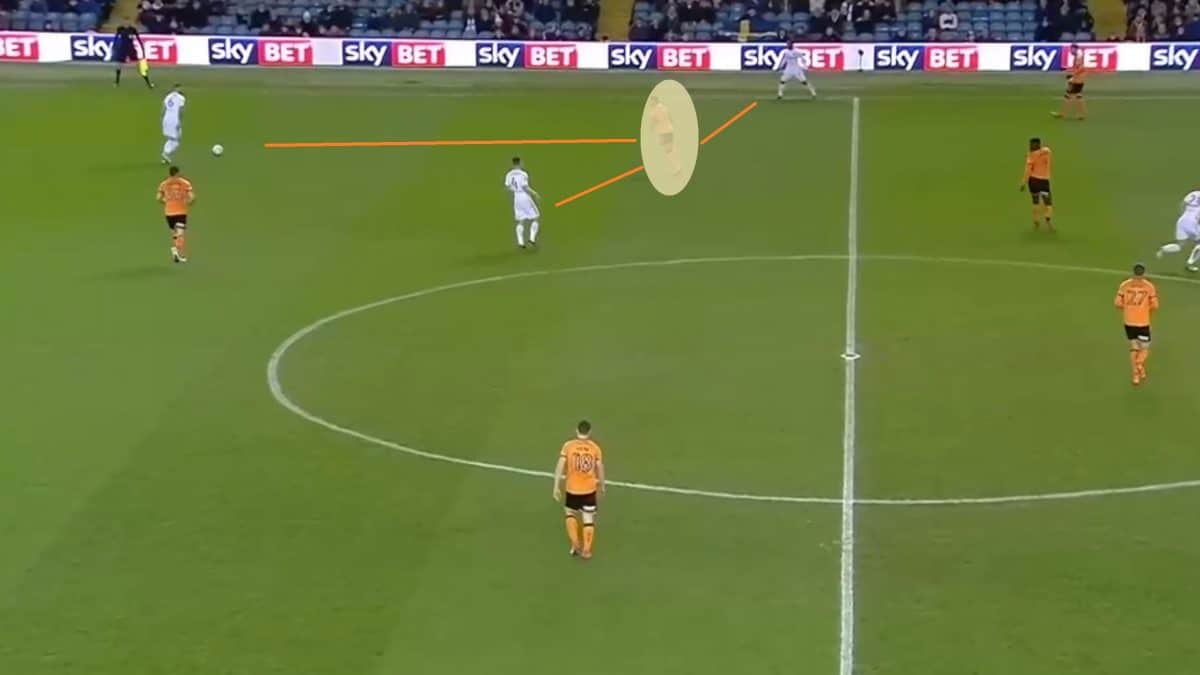 The most notable pressing trigger used by Wolves is when the opposition pass out to the wings. In these situations, they move quickly to press aggressively, using the touchline as an extra man and cutting out the ball-player's immediate passing options. An example of this, which is one of the many tactical aspects that Santo’s Valencia also displayed, can be seen below. 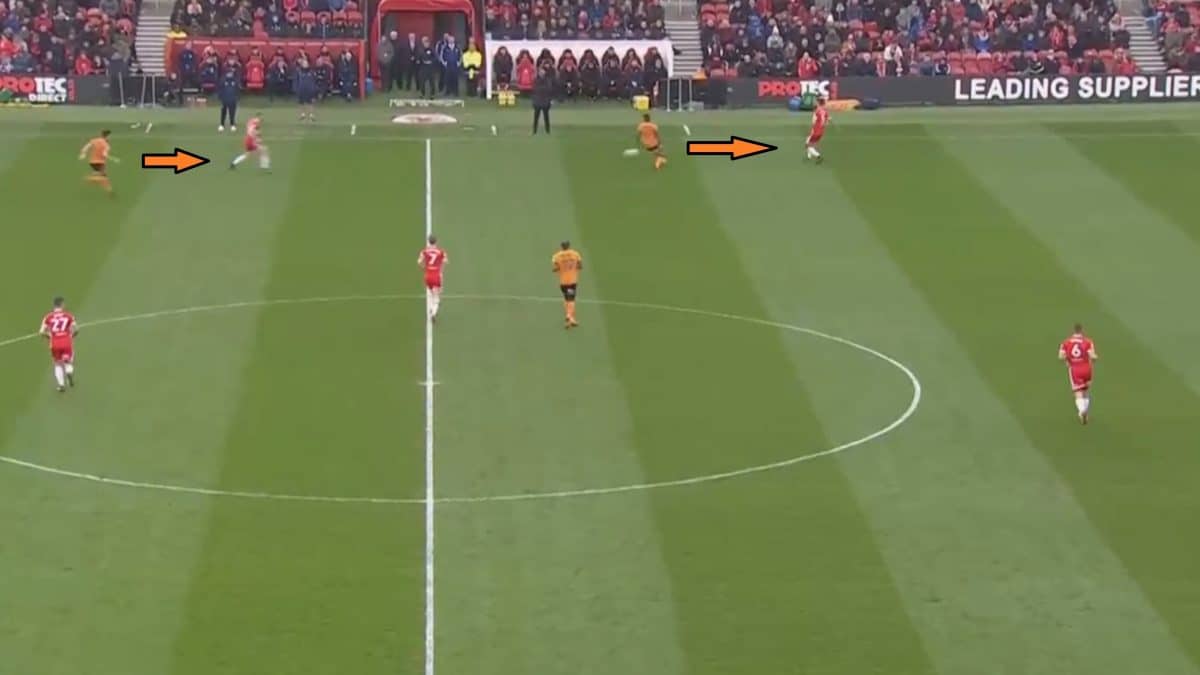 Wolves do not, however, press particularly high. Rather, they drop into a mid- or low-block 5-4-1 shape and look to apply pressure mainly in midfield. Whenever they do win possession back, they often look to their inside forwards as outlets for instant counter-attacks due to the pace and skill of these individual players.

Santo’s emphasis on quick counter-attacking has worked to devastating effect in the Championship. Thanks to this approach in attacking transitions, his Wolves side have scored five goals from counters – more than any other team in England’s second tier this season.

When they have to build from the back, however, Wolves remain effective. This partly because their three centre-backs often include converted midfielder Conor Coady and gifted passer Willy Boly, who is on loan from Porto, though it is also down to the structure and movements Santo has instituted.

This back three offers two major advantages. Firstly, it is tougher to press cohesively due to the presence of three players, as opposed to the more traditional two, in the first line of build-up.

Secondly, it is because each of these players has a number of passing options available to them thanks to the movement of the two central midfielders – normally Neves and Romain Saïss – who both look to stay close to the ball.

What this regularly leads to is a situation like that depicted below where the outer centre-back has the ball and is supported by Coady, the wing-back nearest to him, and the central midfield duo. This often naturally leads to triangle and diamond shapes being formed that create better build-up by giving the outer centre-back at least two viable passing lanes. 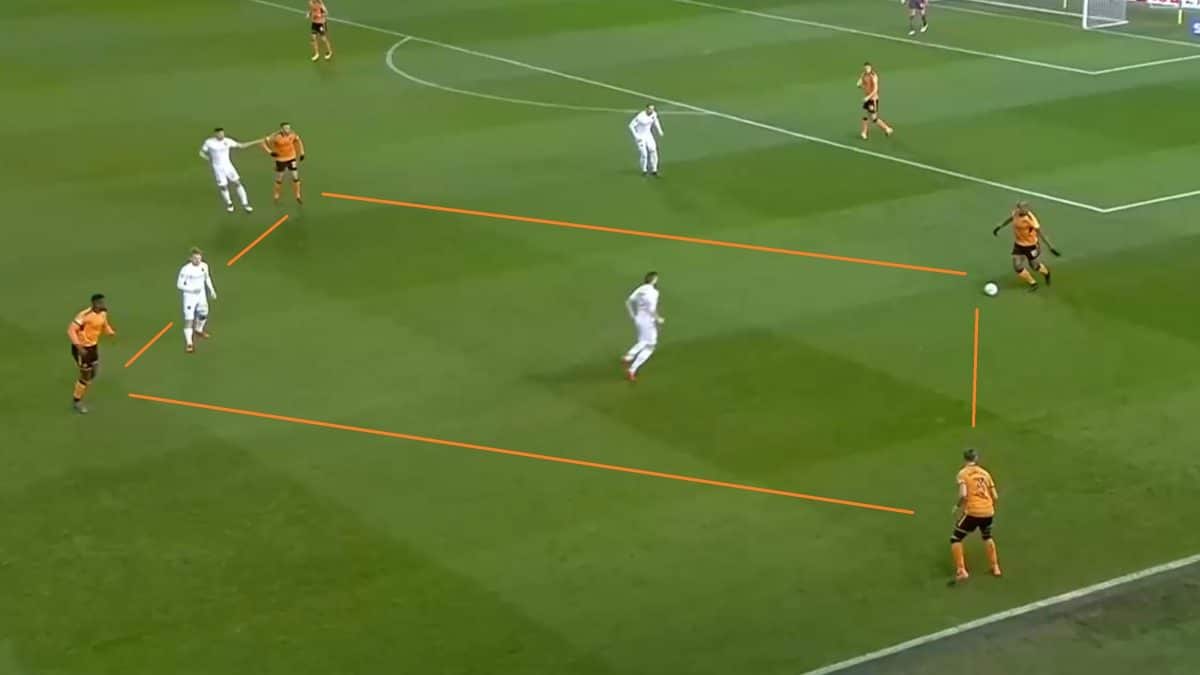 In attack, the inside forwards both look to come infield into more central positions. This helps them to create qualitative superiority up against the opposition defence, as well as positional superiority by way of overloading and getting behind the opposition midfield. These options between the lines help Wolves when looking to progress possession into the final third, though they are unafraid to go wide when the opportunity arises.

This season Barry Douglas on the left look to get in behind the opposition back line, making runs on the blind side of defences forced inside by the aforementioned inward movement of the Wolves inside forwards.

As a result, switches of play are regularly used by Santo’s side in order to create dangerous 1v1 and 2v2 situations on the opposite flank. An example of this in action is shown below, where left-sided centre-back Boly picks out an unmarked Doherty on the right wing. 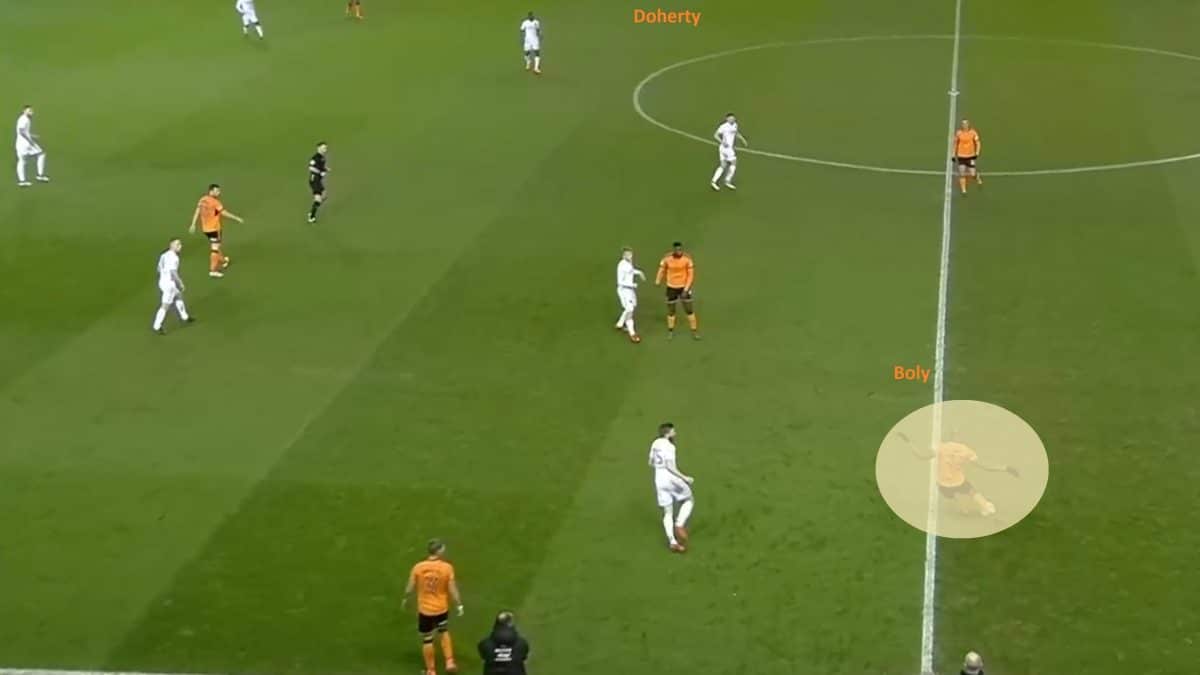 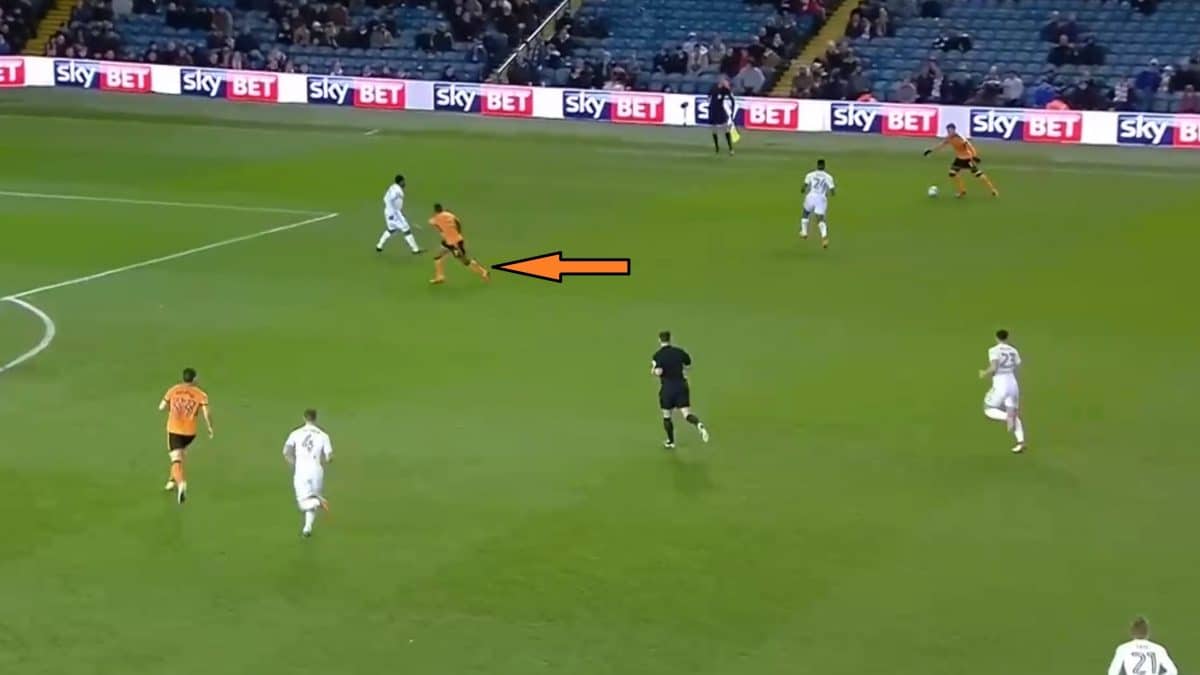 At Valencia, Santo often used advanced full-backs to create what were essentially 5v4 situations against opposition defences, and he has done something similar in the Championship. This is aided by the quality of both Doherty and Douglas in wider areas. The former is an astute dribbler, while the latter is a fine crosser, which explains why he has more assists (14) than any other player in the league.

Wolves aren’t just an efficient defensive unit, but a productive attacking force packed with creative players. Any argument that they are overly reliant on Neves’ passing from midfield to make things happen would be disingenuous. In the four league matches the 21-year-old has missed, they have won two and drawn one, scoring six goals in the process – a record that is only slightly worse than when he is present in the lineup. Instead, the credit for their form this season deserves to go to their head coach.

The traditional route into the Premier League for top managers is to simply be appointed by a Premier League club. However, it is entirely possible that Santo will make his name not only by taking Wolves up, but by keeping them there.