As Atalanta faced a crucial match versus AC Milan during the final home game of the season. With a place in the Europa League on the line, fans of La Dea unveiled a giant image of their coach, Gian Piero Gasperini, before the match kicked off.

Such a tribute was not dependent on whether or not they made it into the competition for the second successive year, such has been the stellar work of the veteran boss.

From the Sliding Doors moment when he was almost fired early in the 2016/17 campaign, “Gasp” has never looked back, taking the decision from that moment forward to field a team full of unproven youngsters.

Before that, they had lost four of his first five games in charge, but the bold move would pay off in spectacular style, the Bergamo-based outfit finishing fourth in the league with a record points total of 72. That was the first time Atalanta had ever concluded a campaign above nearby clubs Milan and Inter Milan, a truly wonderful achievement that also saw them qualify for the Europa League.

It was somewhat inevitable that those Lombardy neighbours would come in for Atalanta’s best young players, with Franck Kessié and Andrea Conti joining Milan and Roberto Gagliardini signed by the Nerazzurri.

There were more hurdles to overcome, too. So many Serie A sides have plummeted the season following a campaign in which they unexpectedly qualified for Europe, as the rigours of competing so far away from home, alongside the usual domestic obligations, are truly taxing on the smaller sides.

But Gasperini was not phased by any of it. To replace those he lost, the veteran simply brought others through from the youth sector, the club supplementing this with signings in key areas, such as winger Josip Iličić from Fiorentina.

By January, they had reached the Coppa Italia semi-finals for their first time since 1996 and had surprised everyone in Europe. In a group that contained both Everton and Lyon, La Dea were not supposed to have had any chance of reaching the group stages, but this side made a collective shrug of the shoulders and got on with their own game.

A 5-1 win over Everton at Goodison Park was the ultimate humiliation for the Toffees, Atalanta becoming the only Italian side to have ever scored five or more goals away from home against English opposition. They would go on not only to qualify for the knockout rounds of the competition but topped their group, eventually losing to Borussia Dortmund in the Round of 32.

After such a mammoth effort, Atalanta could be forgiven for slipping back to a mid-table side in the league this term, yet with a seventh-placed finished they have reached Europe for the second consecutive occasion.

Just as last year saw such achievements draw attention to some of this side’s talented young players, it is only natural that those in the Premier League might look at the Italian boss, especially with the likes of compatriots Antonio Conte and potentially Maurizio Sarri taking charge of England’s top sides. But would the boss go for a move like this? 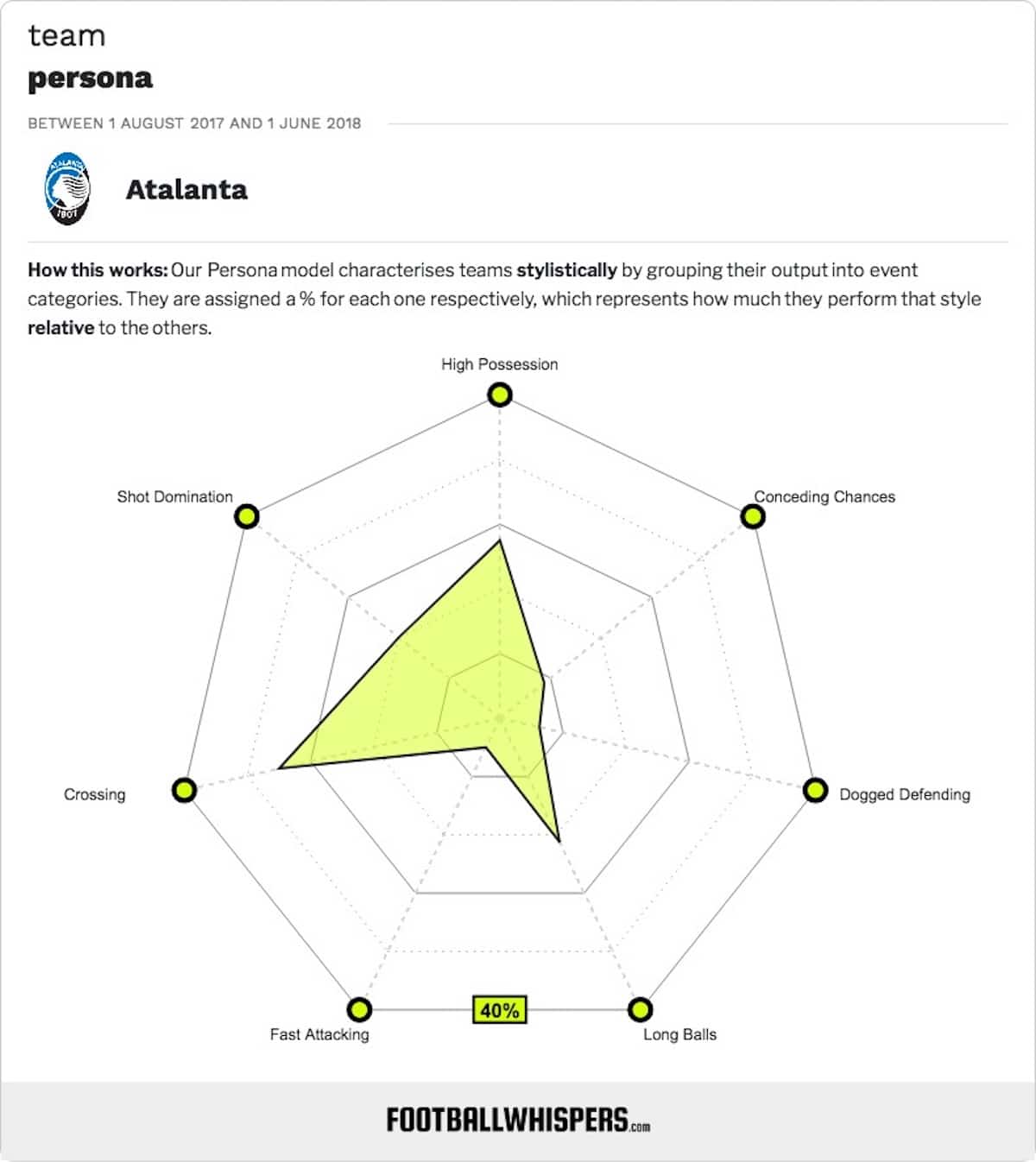 “I don't particularly like that kind of adventure,” Gasperini admitted to Italian newspaper Tuttosport back in February. “I'm happy in Italy, in my world. To move abroad, I would have to be offered something really big and fascinating. I know that Italian coaches are doing well everywhere. We have the best school of coaches because Serie A is the most difficult league around.”

It is worth noting that Gasperini didn’t offer an outright “no” in his comments, and should he eventually decide to move to the Premier League, any English side would discover – just like with Conte – that the tactician would demand hard work. The veteran would also mirror the Chelsea boss in the way he is wedded to a back three. However, his squad and the press would find he was less abrasive in his manner than the former Italy coach.

Workrate has underpinned all of the success of La Dea this term, statistics revealing that this side have made the most ball recoveries (2527) and the second-highest number of tackles per game (19.1) in Serie A this term.

It is no surprise that the three players with the most tackles in the side – Robin Gosens (2.9 per game), Timothy Castagne (2.7) and Remo Freuler (2.5) – are all midfielders as Gasperini insists his team proactively press to win the ball back in midfield and supply it forward to the likes of Iličić and Alejandro “Papu” Gómez.

That duo have recorded 18 assists between them this term, as Gasperini brings the most from his wing players in order to create the highest possible number of scoring chances.

In the defensive phase of the game, the two outside midfielders from the usual four can drop back to make a back five, in the same way as Chelsea utilise Victor Moses and Marcos Alonso. This system cannot succeed without 100 per cent commitment from every member of the team, with the Atalanta man arguably a much better all-round man-manager than his counterpart Conte.

Perhaps the chances of a move to the Premier League are small, but if any sides are looking for a man who can exceed expectations with a team made up mainly of youngsters, Gasperini is most certainly your man.