Over the last two decades there has been an emergence of forward-thinking German coaches.

The country opened itself up to new footballing ideas following the national team’s failures at the European Championships of 2000 and 2004, leading the way for the likes of Thomas Tuchel and Julian Nagelsmann – coaches without top-level playing experience – to take top jobs at young ages.

In many respects, Schalke head coach Domenico Tedesco is just like them. He, too, has no major playing career to speak of, and he is also, at just 32 years of age, very young for a Bundesliga boss.

However, when it comes to ideas, he veers sharply away from his peers. While Tuchel and Nagelsmann gained respect for their fluid, exciting attacking play, Tedesco has established himself as a defensive master.

As opposed to passing and positional play, Tedesco is making his name primarily through pressing and positioning without the ball. Considering this preference it’s worth noting that he was born in Italy, the home of defensive rigour and the birthplace of Catenaccio, and grew up supporting Juventus, a club who have won countless trophies on the back of solid defensive foundations in recent times.

Like Liverpool manager Jürgen Klopp, he was given his big break by Christian Heidel – former director of football at Mainz, now sporting executive at Schalke – and he is acutely aware of the benefits that come from harnessing the power of the fans, as he showed when standing among Schalke supporters in the Nordkurve after the recent Ruhr derby win over Borussia Dortmund.

But that really is where the Klopp comparisons should end. Perhaps unsurprisingly for a Juventus fan who grew up in the 1980s and ‘90s, one of Tedesco’s main current coaching inspirations is, in fact, Antonio Conte. “Conte is a good example,” he told t-online.de last December. “[His Italian national team] did not necessarily have the big names…but they convinced as a team. And with Juventus he put on a fantastic [season] where [they didn’t lose a] game in one season.”

As well as the priority both place on defensive organisation, Conte’s influence can be seen in the way Tedesco conducts his team from the touchline, cajoling and franticly gesticulating.

He is constantly immersed in the game and spends most of his time standing up, pointing out positions for his players to take up. He’s also uncompromising – when he first arrived at Schalke he stripped Benedikt Höwedes of the captaincy as he couldn’t guarantee him regular game time.

Within a year of his appointment, Tedesco has barked Schalke into excellent shape. They currently sit second in the Bundesliga, four points clear of Bayer Leverkusen and Dortmund. With just four games left, they are almost certain of a place in next season’s Champions League. A quick look at the statistics makes it clear that this achievement has a lot to do with a well-oiled defensive game.

PPDA stands for ‘passes allowed per defensive action in the opposition half’. This shows how many passes opposition sides, on average, complete in their own half before being dispossessed. ODC, meanwhile, stands for ‘opponent passes completed within an estimated 20 yards of goal, excluding crosses’.

This shows how many passes opposition sides, on average, complete in and around the final third before being dispossessed. Good numbers in these two categories are indicators of quality defending, and Schalke are in the Bundesliga’s top five for both.

Tedesco generally sets his side up in a 3-3-2-2 or 3-4-1-2 system, though both have required a number of individual re-deployments.

Former Tottenham Hotspur midfielder Benjamin Stambouli has been converted into a sound right-sided centre-back; former attacking midfielder Max Meyer has thrived as a deep-lying playmaker; and former No.9 Franco Di Santo has become more of a No.10.

Their performances this season are a testament to their coach’s creative streak, which he undoubtedly honed while completing a master’s degree in innovation management.

Individual roles aren’t the only area where Tedesco has modified in his maiden season at the Veltins-Arena – he has also regularly varied his team’s pressing approach.

Depending on the opposition, he has opted for a high press, a midfield press, or a low press, though one recurring theme is intense pressing near the touchline. His Schalke pack the centre – seen below in the 3-3-2-2 shape where the two strikers are supported by two midfielders while Nabil Bentaleb covers the space behind – which forces opponents to go wide. 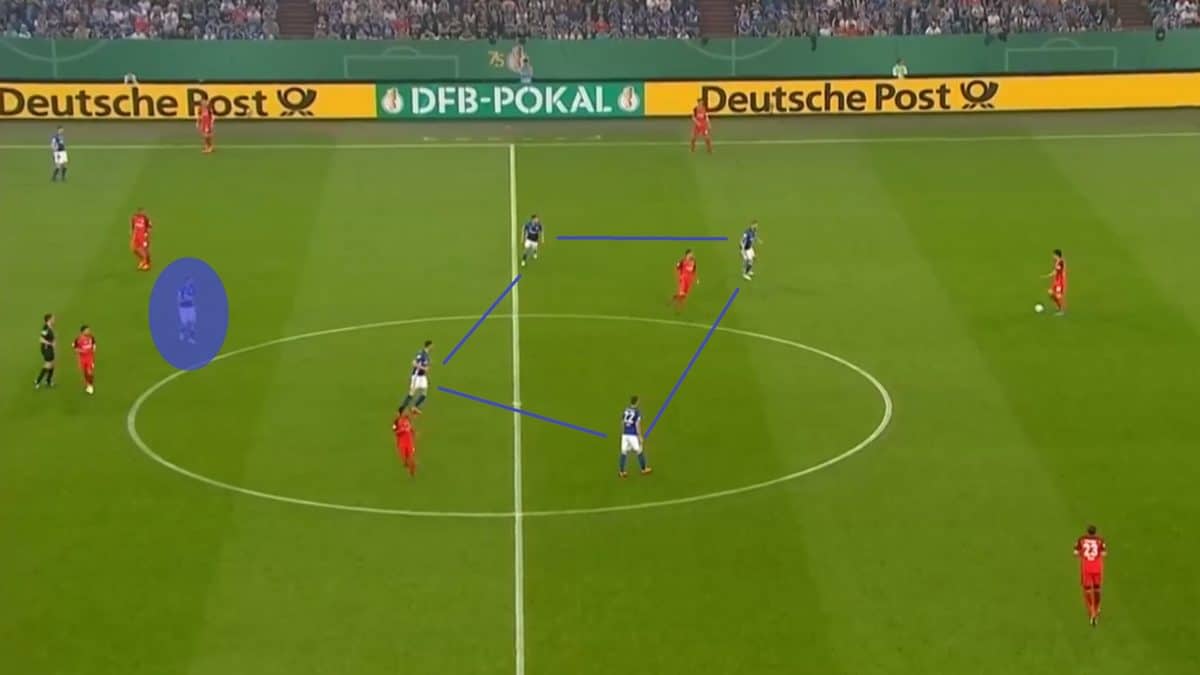 Once Tedesco’s side have forced their opposition out towards the touchline, they attempt to surround and isolate the ball-player. The wing-backs play a crucial role in this, taking it in turns to leave the back line and apply intense pressure to their opposing man when the ball is on their flank.

An example of this is seen below, where Schalke right wing-back Daniel Caligiuri moves up to pressure Marcel Schmelzer. A bad first touch from the Dortmund left-back allows Caligiuri to intercept and lead a counter-attack which ends up in a goal. 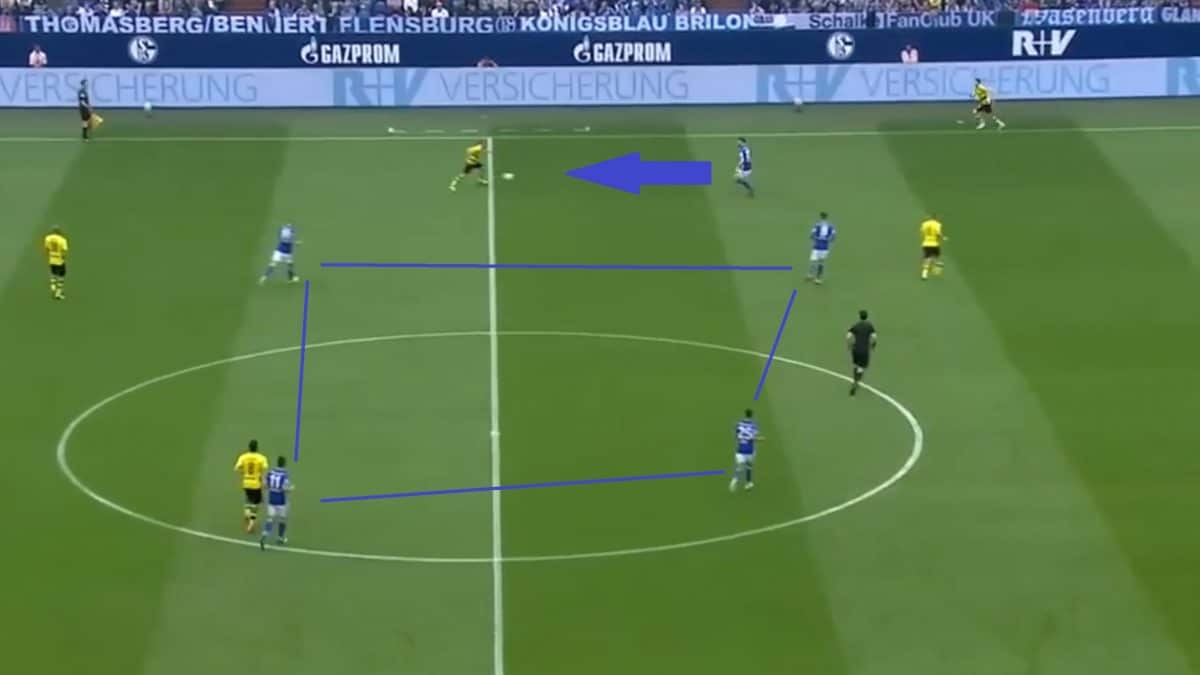 Tactically, Tedesco is more than happy for his side to not have the ball. Indeed, eight Bundesliga teams have averaged more possession than his Schalke’s 48.7 per cent this term. And, when his side do have the ball, they are unafraid to be direct.

If the opposition press high at goal kicks, Ralf Fährmann will go long over the top, and the centre-backs – usually Stambouli, Naldo and Thilo Kehrer – often look to go straight through to the front three when building out from the back.

Klopp once argued that, “No playmaker in the world can be as good as a good counter-pressing situation”. Tedesco, however, appears to believe that pressing against organised defence is just as productive a playmaker as pressing against counter-attacks. Schalke have scored several goals this season simply by forcing errors in the opposition’s build-up, such as the aforementioned opener against Dortmund, and their second in a 2-1 win over Nagelsmann’s Hoffenheim, depicted below. 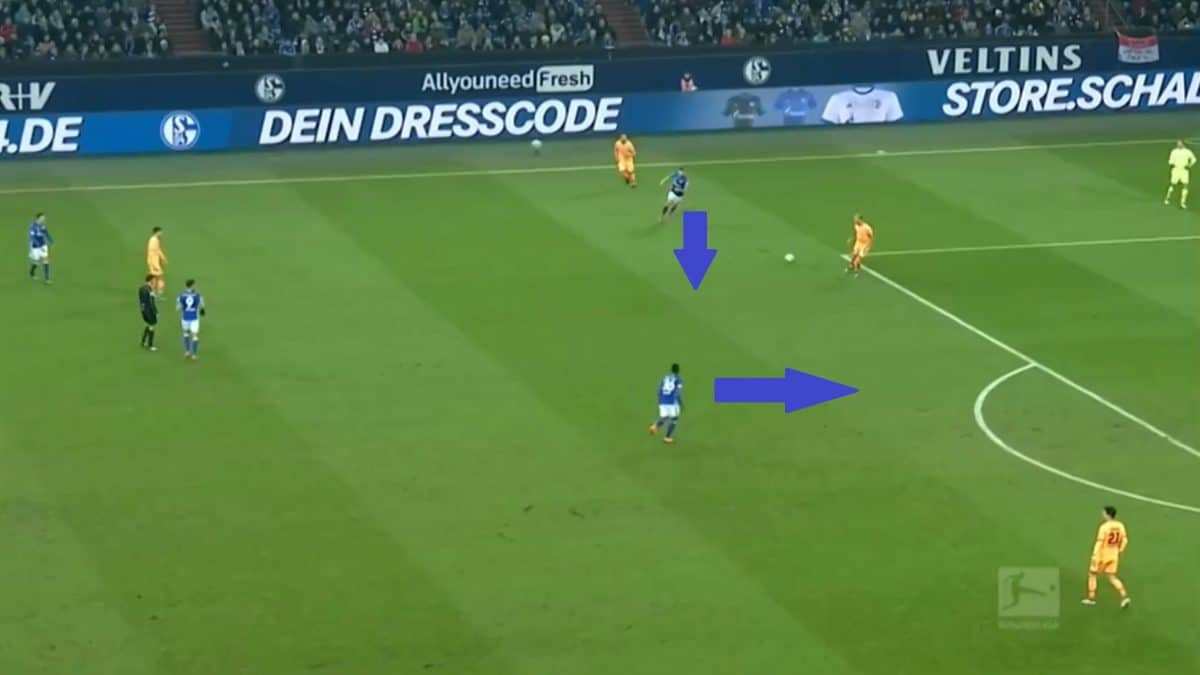 An interview with Spielverlagerung revealed the detail in Tedesco’s pressing strategy. “It has to be clear which player in which situation does the transition,” he said. “What’s the pressing trigger? Which passes made by the opponent should be recognised as a signal? For instance, there are opponents who use two centre-backs…positioned wide.

“When these two [pass] to each other, the ball is moved over a relatively long distance. That means the ball is loose for some time. These are the best moments to pressure.”

There is a small possibility that his defensive nous could be seen in the Premier League in the near future. Tedesco speaks five languages, so should have no problem adapting and communicating in another country.

He is also purportedly a favourite of Sven Mislintat, Arsenal’s recruitment chief, which suggests he could be on the list of contenders to succeed Arsène Wenger at the end of this season.

Some might argue that the Arsenal job is too soon for Tedesco, but the same criticisms were directed against him when he took charge at Schalke last year with just three months of first team management in the German second tier under his belt. He is rising rapidly through the ranks, and his next stop could well be one of England’s finest clubs.