Pep Guardiola is set to renew his long-running duel with José Mourinho this weekend when his Manchester City side take on Manchester United. Victory would secure the Premier League title for City, while also giving the Catalan coach a 10th win in 20 contests against his Portuguese peer.

Increasingly it appears that Pep versus Mou isn’t the iconic rivalry it once was. Their battles in La Liga while in charge of Barcelona and Real Madrid respectively were epic, but the former has established his dominance. Instead, a new rivalry between Pep and Liverpool boss Jürgen Klopp appears to be forming.

Not only does Klopp have a better record against Guardiola than vice versa, but their competition is much more fun to watch. There are fewer verbal barbs and the actual football tends to be exciting. Their ideals of high pressing, aggressive counter-pressing and penetrative possession often lead to intensely entertaining games.

The last contest between the two managers saw Klopp’s Liverpool win 4-3 over Guardiola’s Manchester City in what was arguably the match of this season. And the two teams will meet again in Champions League action at Anfield on Wednesday night.

As this managerial conflict begins to take shape, we at Football Whispers look back at some of the Premier League’s greatest managerial rivalries.

‘Big Sam’ and his Bolton Wanderers side were not an easy bunch to come up against in the early 2000s. After their promotion to the Premier League they set about disgruntling many a top team, and Wenger’s Arsenal were their favourite targets.

In his autobiography, Allardyce wrote about the pleasure he took from beating the Gunners. “I enjoyed beating Arsenal more than anyone when I was in charge at Bolton,” he wrote.

“We'd really got to them and Arsène Wenger hated us. We drew with them or beat them more often than expected and Wenger couldn't handle it. There was one time he wouldn't shake hands with me at Highbury because we got a draw.”

There was a huge stylistic contrast between the two teams, and Wenger’s side struggled to get to grips with Bolton’s direct form of attacking. The most important contest in the rivalry came in April, 2003, when Allardyce’s side came from 2-0 down to draw 2-2 with Arsenal. The BBC described the result as a “devastating blow to Arsenal’s title ambitions.” They were right – the Gunners eventually finished second behind Manchester United. 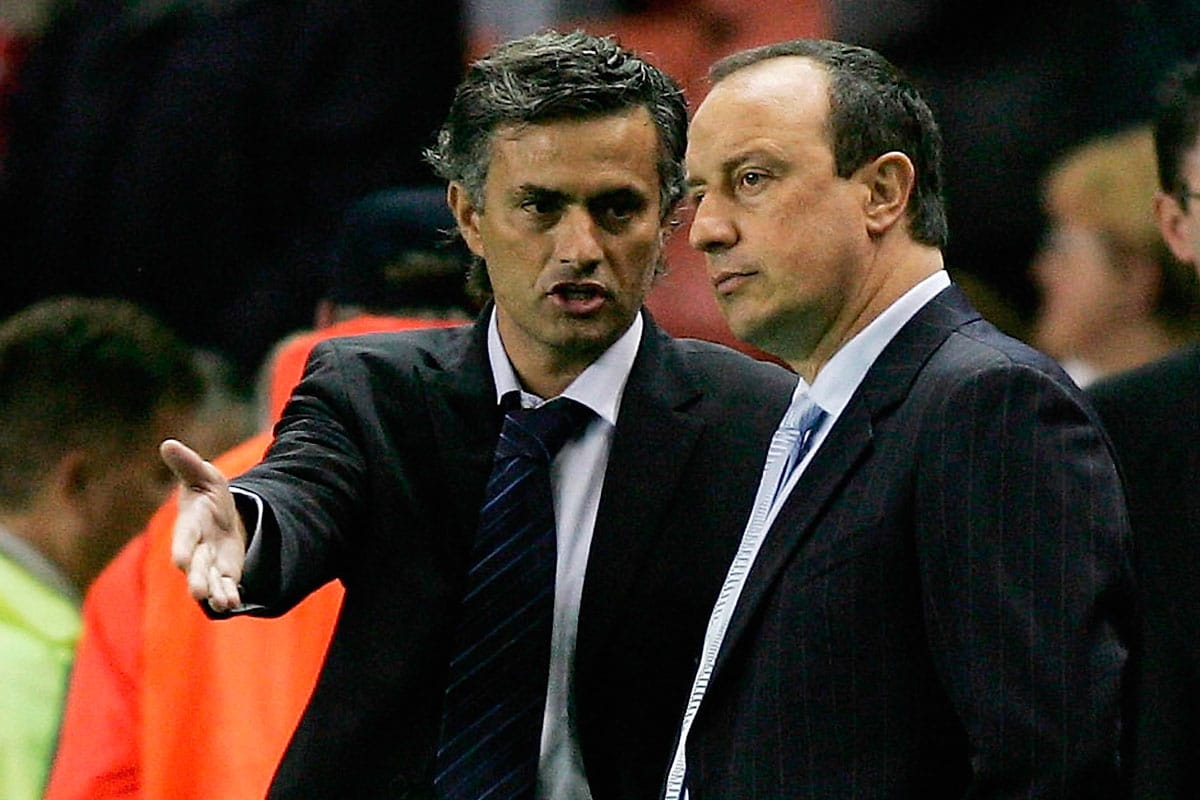 Mourinho first arrived on the Premier League scene on 2 June, 2004. Earlier that year he had captured English attention by sprinting down the touchline as his Porto side eliminated Manchester United from the Champions League. The Portuguese giants went on to win the competition, and Mourinho was appointed Chelsea manager.

Two weeks after ‘The Special One’ had landed, Benítez also got his first Premier League gig. Having led Valencia to a double of La Liga and UEFA Cup, he was viewed as one of the most promising managers on the continent.

Mourinho and Benítez brought about a new era in Premier League football, as Michael Cox describes in his book, The Mixer, writing that: “For the first time, managerial philosophy had become more important than the style of players.”

The first season of their rivalry was defined by a 1-0 for Liverpool over Chelsea in the Champions League semi-final thanks to a ‘ghost goal’ from Luis García. Benítez’s side went on to be crowned continental kings, but Mourinho could never let go of that phantom finish. “The best team lost,” he said afterwards.

It’s difficult to imagine now, given no team has retained the title for eight years, but the Premier League used to be a two-horse race. Manchester United and Arsenal fought it out each season for top spot, with Ferguson and Wenger constantly looking to one up each other.

The pair were completely different personalities. Ferguson was the gruff Scotsman who had built and rebuilt great teams, while Wenger was the laissez-faire Frenchman who believed in the primacy of the individual footballer.

The tone was set early on when Ferguson suggested that his rival should ‘keep his opinions to Japanese football’ as Wenger had joined Arsenal after a spell with Nagoya Grampus Eight. From thereon in, the duo regularly butted heads, sharing some memorable games and title races along the way.

Ferguson’s managerial rivalry with Keegan peaked in the 1995/96 season, when their Manchester United and Newcastle United sides battled it out for the Premier League title. As the race neared its conclusion, the Scotsman suggested that teams tried harder against his side than they did against the Magpies. Cue an unforgettable televised rant from Keegan.

Speaking to Sky Sports after a win over Leeds United, the Newcastle boss pulled no punches when asked to discuss his rival’s comments. “I've kept really quiet but I'll tell you something, he went down in my estimations when he said that,” Keegan said.

“We have not resorted to that. You can tell him now, we're still fighting for this title and he's got to go to Middlesbrough and get something – and I'll tell you, honestly, I will love it if we beat them. Love it.”

Ultimately, Ferguson’s United would go on to lift the title that season, and Keegan’s rant was seen as the moment his side’s contention essentially broke down.

In some ways, Mourinho and Wenger are quite similar. They both believe in their way as the way, generally refusing to compromise on their principles. However, those principles are extremely different.

While Wenger has committed himself to individualism, Mourinho has always been a deeply systematised coach. The latter openly disrespected the former in February 2014, with his Chelsea one point ahead of Arsenal atop the Premier League table at the time. “He's a specialist in failure,” Mourinho stated. “If I do that in Chelsea, eight years [without silverware], I leave and don't come back.”

The two have always had a frosty relationship – one that perhaps climaxed when Wenger shoved Mourinho during a clash in October 2014. However, the Portuguese has unquestionably gotten the better of things on the pitch, winning nine of their 18 meetings compared to Wenger’s two.