Udinese, perhaps more than any other club in Europe in the last 20 years, have continually unearthed diamonds before selling them on at a huge profit. Rodrigo De Paul looks set to become the latest in a long line this summer.

South America has long proven fertile grown for the club's owners, the Pozzo family, and their sophisticated global scouting network. It was the small provincial club from Friuli who gave the world Alexis Sánchez, most famously, taking him from Chile for €2million before selling him onto Barcelona in 2011 for €26million.

After scoring nine times last season to help the Zebrette avoid relegation, De Paul has declared his intention to leave Udinese this summer.

“I want to play in the Champions League, I want to take a step forward in my career,” he told Fox Sports. “I want to grow even more, but it won’t happen until someone meets Udinese’s demands.

“Still, I want to play in the Champions League again, whether that’s in Italy, Spain or the Premier League.”

The 25-year-old still has four years left on his contract and there is no release clause, meaning whoever wants the Argentine winger will have to pay a hefty fee to secure his services.

According to Calciomercato, Internazionale have already held discussions with Udinese over the possibility of a deal while De Paul was playing for Argentina at the Copa América.

So, should one of the Premier League's elite be looking at De Paul this summer and what would they get if they made a move? 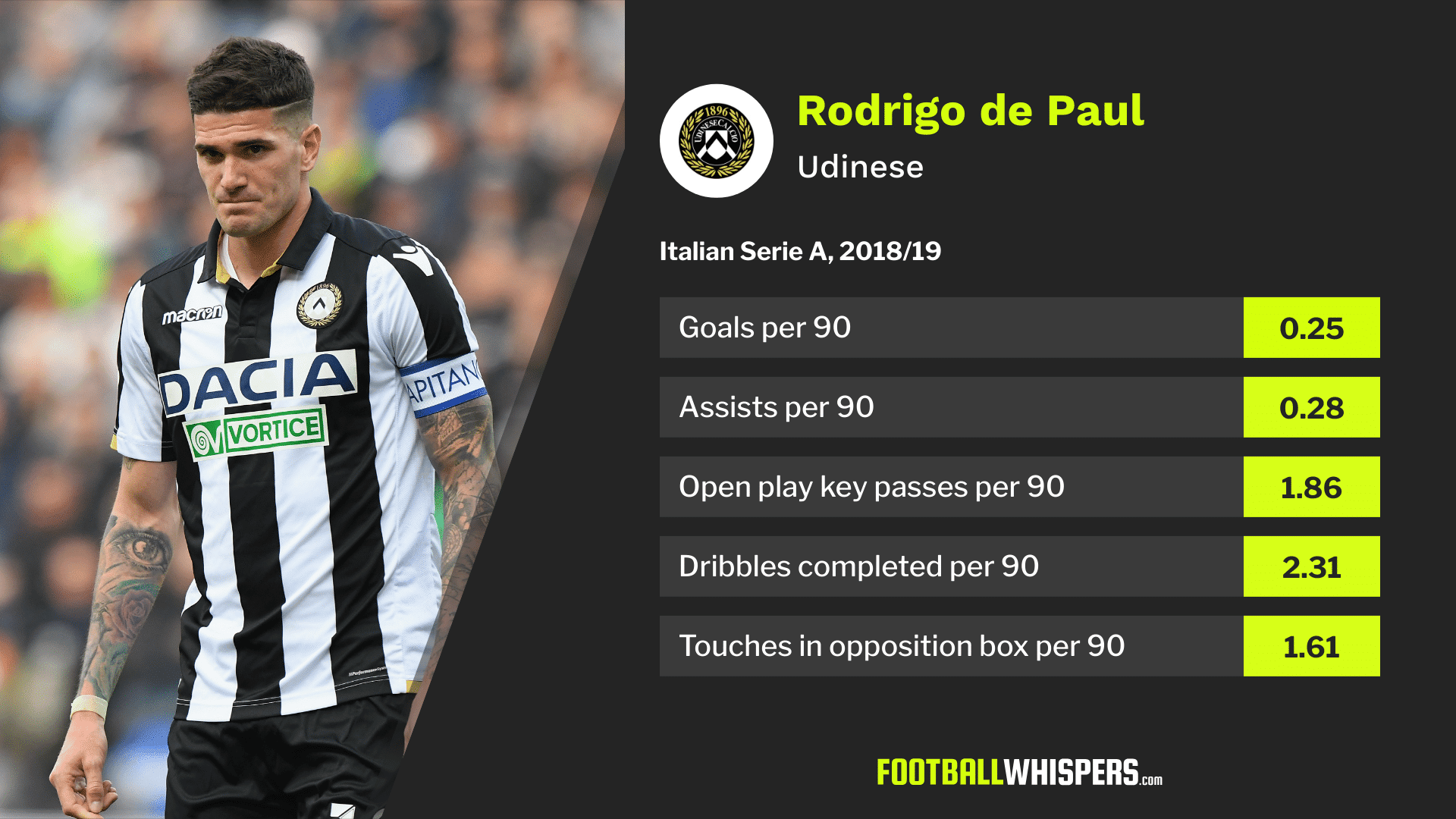 De Paul's statistics for the 2018/19 campaign make impressive reading – even more so given he was playing in a mid-table Udinese side which was, at one point, battling for survival.

With ten assists and nine goals he was the Zebrette's leader and talisman. Fellow Argentine Ignacio Pussetto was the club's next highest scorer with four, which underlines quite how pivotal the 25-year-old was for David Nicola's side.

Furthermore, De Paul came up with goals at big moments – he never scored in a game that ended in defeat for Udinese. He notched priceless winners against Sampdoria and Roma, as well as netting in wins over Empoli (2), Bologna and Chievo.

Watch those goals back and you'll very quickly spot a trend. In the same way Arjen Robben made a habit of darting down the right before cutting inside to shoot on his favoured left foot, De Paul has a penchant for coming in from the left and letting fly with his right.

Like the Dutch flyer, De Paul is incredibly hard to stop despite being so predictable. Witness his goals against Empoli, Genoa, Torino and Sampdoria last season, all of which were beauties in their own right.

With four goals from outside the box last season – no midfielder bagged more and at a rate of 0.11 per 90 – De Paul ranked 11th among his peers in Serie A. He also completed an impressive 2.31 dribbles per 90, the seventh most in the division, while he was seventh for shots on target (0.93 per 90).

But De Paul is not just a chance taker, he creates them too. Ten assists was the second-highest total of any Serie A midfielder last term at a rate of 0.28 per 90 – an over-performance against his expected assists per 90 score of 0.21. De Paul was eighth for shot assists (1.86) and seventh for big chances created (0.42).

Interestingly, two metrics which creative players rarely score well in are crosses completed and through balls completed. De Paul was sixth for the former (1.66 per 90), which underlines the fact he can go inside or out when in possession, and completed more through balls (0.31 per 90) than any other midfielder in Italy's top flight.

As we can see from De Paul's heat map (below) while nominally a left-sided player, he is comfortable driving inside to act as a playmaker in more central areas. 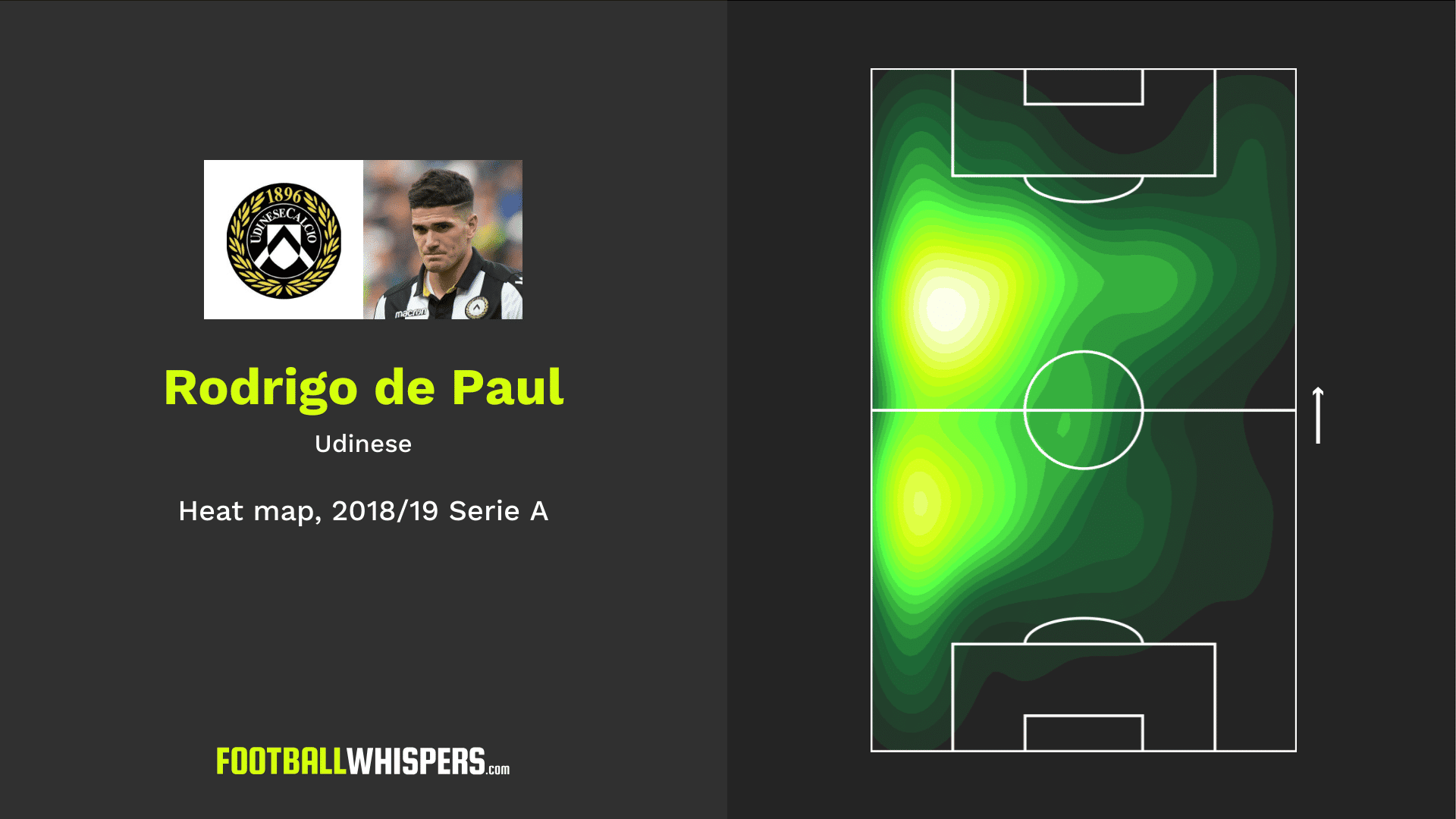 His importance to the Zebrette is underlined further in the following:

De Paul is not the complete player yet. For a start, he missed three of the six penalties he took last season – a wasteful return, particularly for a club of Udinese's size. He was also dispossessed 1.86 times per 90 minutes, 16th most among midfielders in the league.

Surprisingly, given his goal and assist contributions, he only took 1.6 touches in the opposition box per 90. Some coaches might like to see their winger driving into the penalty area with greater frequency. But given the regularity with which he makes decisive contributions from outside the 18-yard box, perhaps that shouldn't be too much of a concern for any prospective buyer.

De Paul has already had one crack with a big club, leaving Valencia in 2016 to move to Udinese. In three years in Friuli he's been fattened up ready for market and now it's time for the Zebrette to do what they do best and extract the best possible price for their star asset.