In the past teams often used to rely on just their strikers to score the goals but these days it's about looking to spread the threat so you're no longer reliant on just the one player. For a time that threat came from midfield, through the likes of Steven Gerrard, Frank Lampard and, yes, Kevin Nolan.

But over recent seasons we've seen the evolution of the wide forward. They're no longer tasked with maintaining width, managers now encourage these players to get into the penalty area and pose a goal threat.

The emergence of goal-scoring wingers shouldn't have been a surprise.

Cristiano Ronaldo threw down the gauntlet when he was at Manchester United, scoring 31 goals in 34 matches during the 2007/08 campaign.

Gareth Bale, meanwhile, netted 21 in 33 during his final season with Tottenham Hotspur before his big money move to Real Madrid.

And Eden Hazard has taken up the challenge at Chelsea, bagging 14 league goals or more in three of the five full seasons he's had at Stamford Bridge.

Top managers now look to fill their forward line with goal threats instead of having the odd creator in there. And the 2017/18 season has showed exactly why the likes of Pep Guardiola, Jürgen Klopp, Arsène Wenger and Mauricio Pochettino have done just that.

So we've dived into the stats and taken a look at the most productive wide forward/wingers who have played more than 900 minutes in the Premier League.

We took a look at expected goals (xG) and expected assists (xA) per 90 minutes along with key passes, dribbles completed, tackles and interceptions in an attempt to come up with an all-round view of these players. 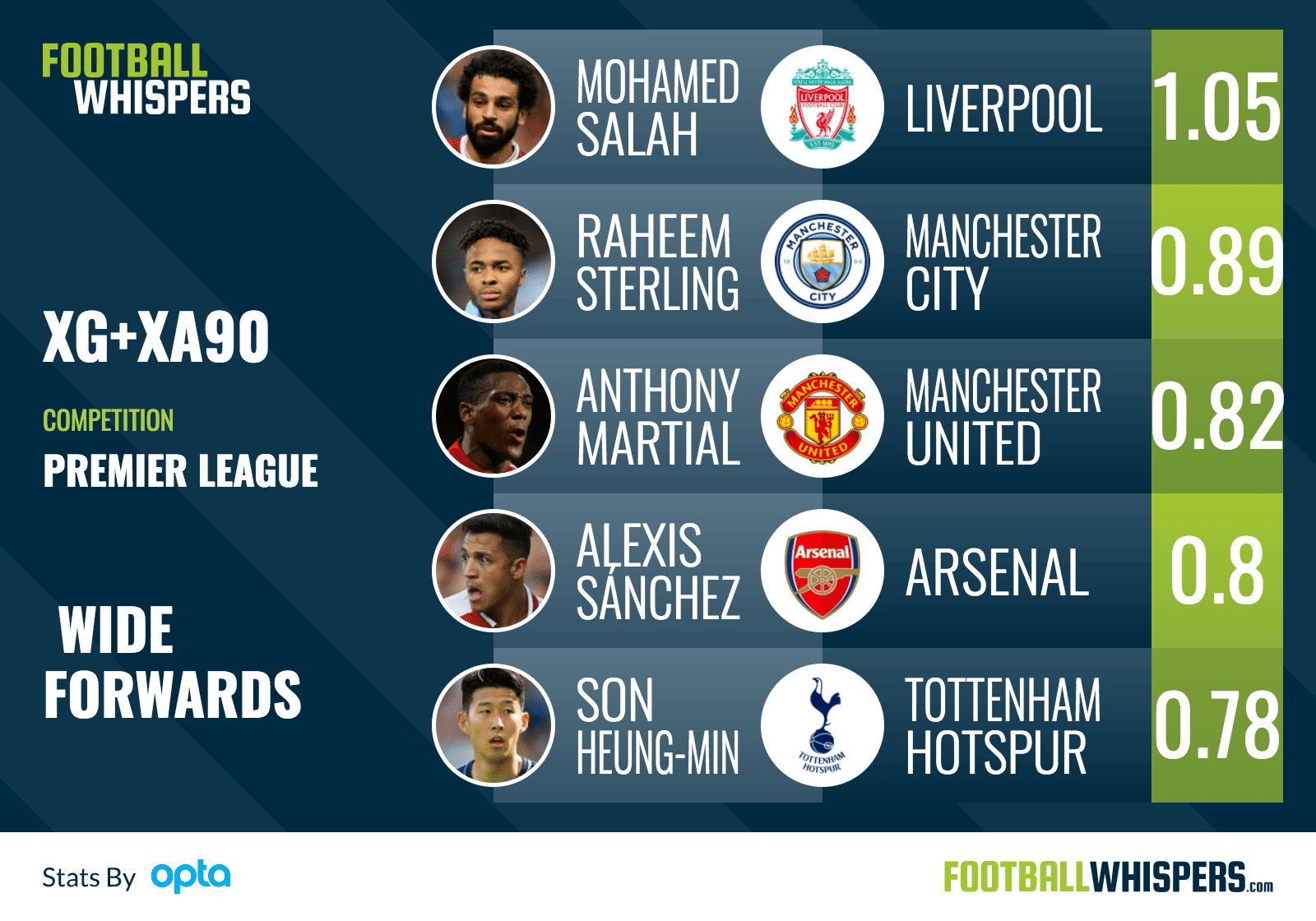 For example, the graphic shows Alexis Sánchez is getting into good goal scoring areas as well as creating high quality chances for teammates, but he has just seven goals and three assists to his name this term.

If he maintained such form over an entire season he'd have a hand in 31 goals. Not a bad return at all for a player who is currently ‘underperforming' as he pushes for a move away from Arsenal.

Mohamed Salah and Raheem Sterling top this list both in terms of goals scored and xG+xA90. The Liverpool No.11 has 18 league goals and has been a revelation since his summer move from Roma, while Sterling is currently Manchester City's top league goalscorer with 14, one ahead of the prolific Sergio Agüero.

And the two wide forwards aren't just in a purple patch of form. Their xG+xA90 numbers support this.

But you have to wonder why José Mourinho doesn't give Anthony Martial more first-team minutes.

He makes the cut, having played 999 minutes in the Premier League this season, and had he appeared as often as Salah (1684) or Sterling (1582) then he might be much closer to their goal return. 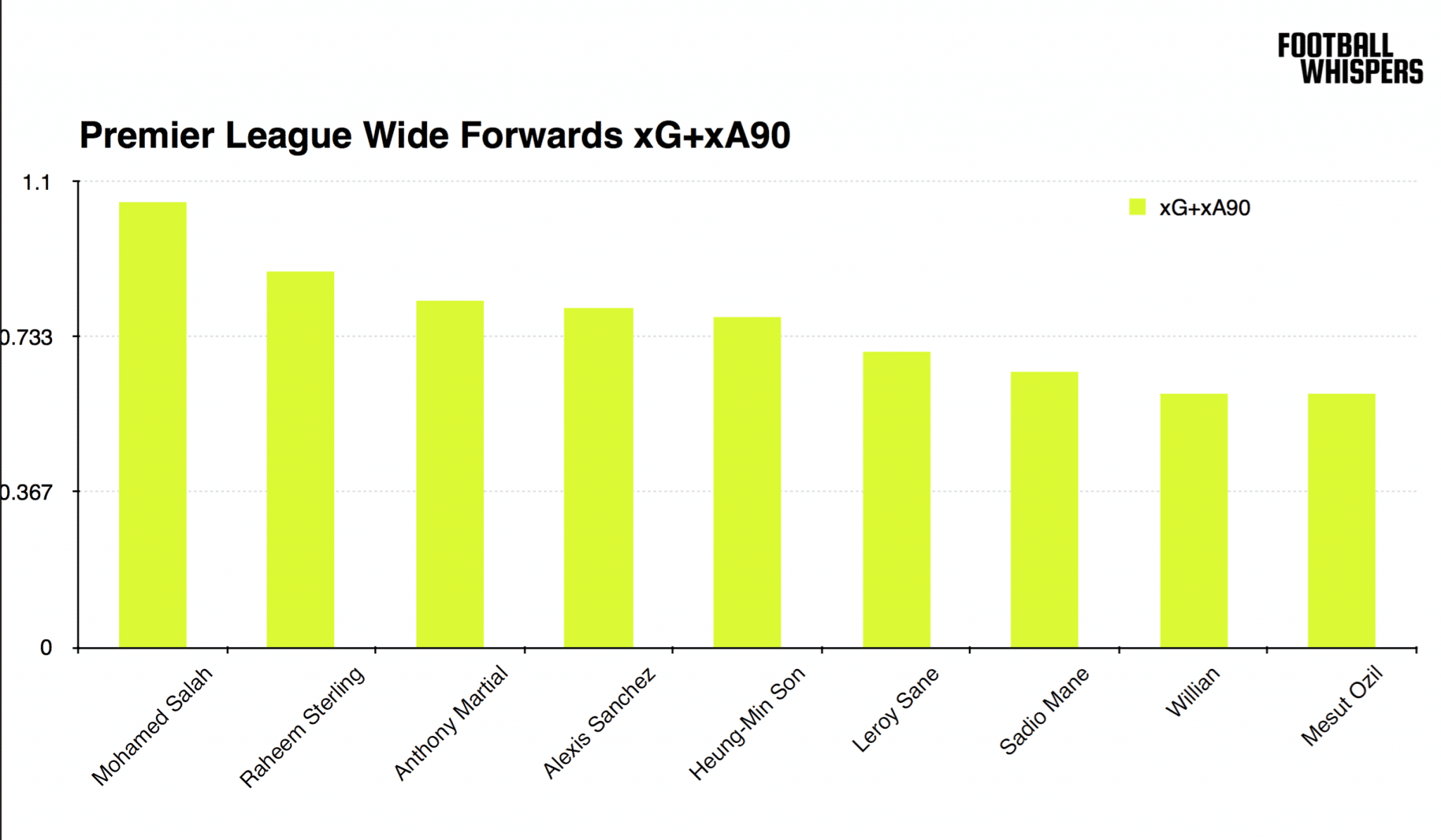 As you can see in the graphic above, Martial, Leroy Sané and Willian are perhaps surprise names in the top nine. Sané and Willian make the list because of their higher xA90, with the Man City man the highest on the list at 0.41.

He's a dangerous weapon for Guardiola, providing the ammunition for the likes of Agüero, Sterling and Gabriel Jesus.

Willian, meanwhile, has an xA90 of 0.33 and it makes you question why Antonio Conte doesn't make him more of an integral part of his squad.

Sadio Mané's inclusion may come as a surprise to a few people. He's out of form and out of sorts yet his xG+xA90 for the season (0.65) is higher than last season's total of 0.56.

The Crystal Palace winger has been in fine form this season, often being the only attacking threat for Roy Hogdson's men, but his xA90 of 0.16 lets his down.

Likewise, Riyad Mahrez, linked with big money moves to Liverpool and Arsenal, has an xG+xA90 average of just 0.43.

Not only do wide forwards have to be a goal threat, they also have to make things happen.

Though it's not an ideal way to judge it, key passes and dribbles completed per 90 help you build up a picture. 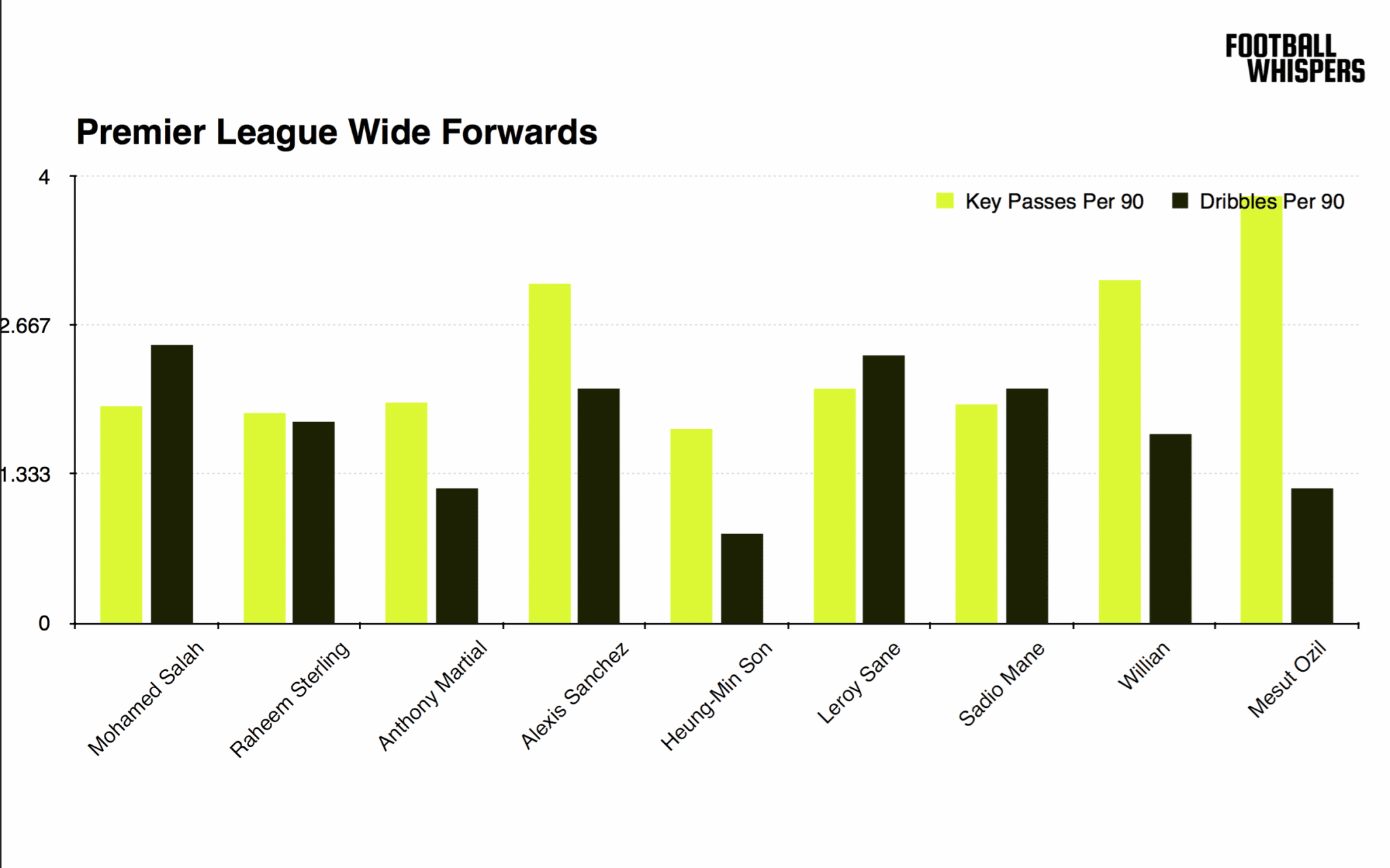 In the graphic above we've taken a look at the top nine players for xG+xA90 to see what their dribbles and key pass numbers are like.

The one obvious standout stat is Mesut Ôzil's key passes, which is 3.82 per 90 minutes. Sánchez, his Arsenal teammate, also averages over three key passes and the only other player on the list to manage it is Willian.

The others on the list all rely on their dribbling ability to take players out of the game. With Salah, Sánchez, Sané and Mané all averaging over two completed dribbles per 90 minutes.

However, the top two on the list don't make the top nine. The Crystal Palace pairing of Zaha (4.2) and Andros Townsend (2.7) come in first and second with Hazard, famed for his dribbling ability, averaging 2.1.

Zaha is, again, a strange one. He completes the most dribbles in the league but his xG+xA90 is lower than you would imagine.

The quality of player alongside him might be an issue but it doesn't explain why a forward, where he's been playing, completes so many dribbles without taking a shot on goal, which would boost his xG, or a pass to a teammate, which could see his xA spike. 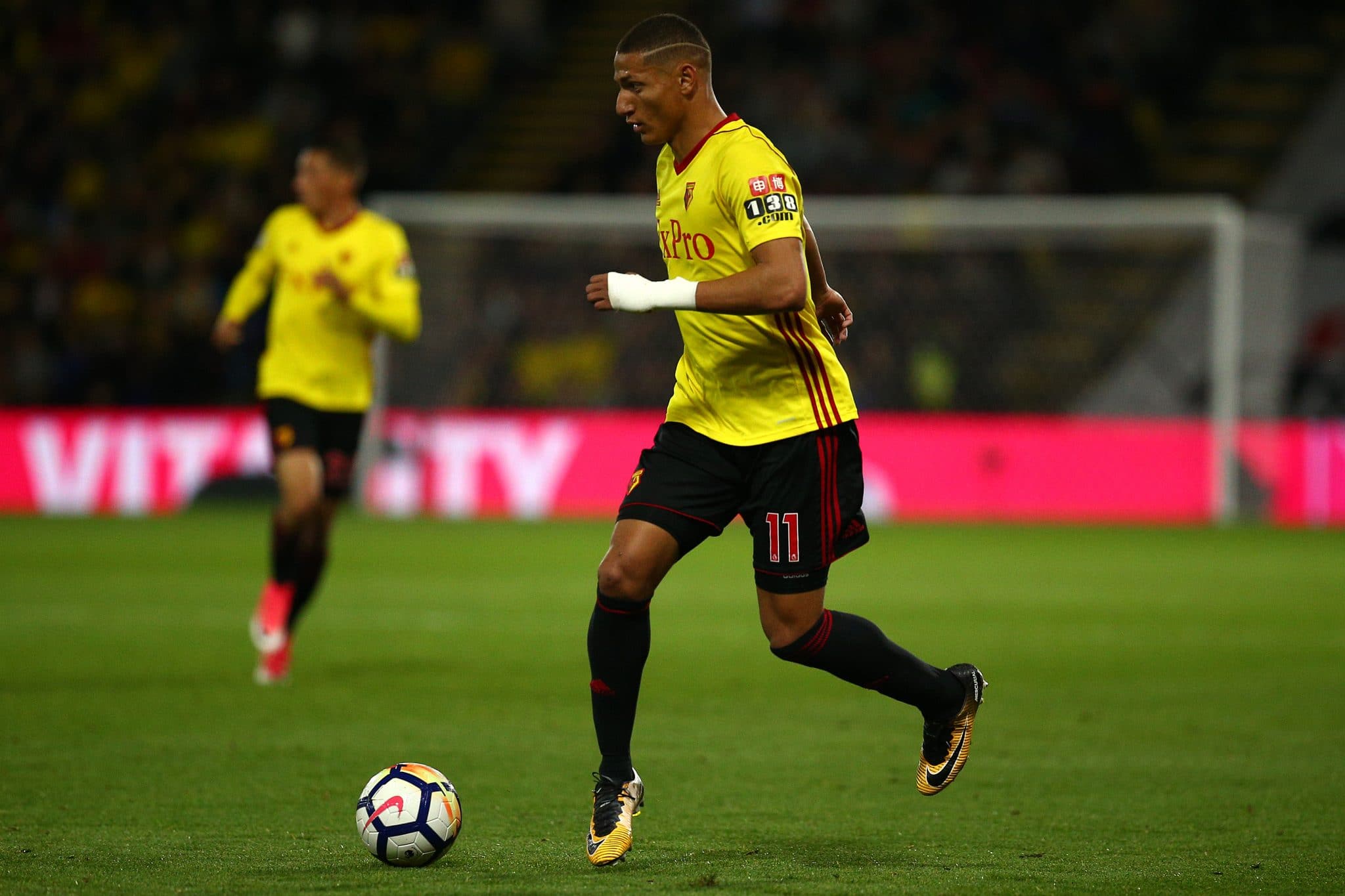 As yet, there isn't a stat out there to help measure how good an attacker is at pressing the ball. Tackles and interceptions is a crude way to judge an the defensive work rate, but it does help show who doesn't mind getting their hands dirty.

For example, Salah might chase a player 30 yards but see Emre Can make the tackle. The German midfielder is awarded the tackle stat while Salah gets nothing.

Managerial instructions also have to be taken into account. Are these players being tasked with tracking back or does the manager want them to stay in advanced areas?

Only four players on this list average one or more tackles per 90 minutes; Mané, Sánchez, Marc Albrighton and Richarlison.

It's the Watford man who really impresses in this category. He also makes 0.8 interceptions giving him a combined score of 2.8. No other player on the list averaged more than 1.9 (Albrighton).

For added context, Salah has a combined total of 0.2, Sterling 0.5, Heung-Min Son 0.7. All of whom play in high pressing systems.

While Salah and Sterling are the most prolific and Özil, Sánchez and Willian are perhaps the most creative, it's Richarlison who is the one to watch.

The 20-year-old is a complete modern day wide forward and a move to a bigger club would likely see him climb further up the respective charts.