The Premier League is graced by some of the finest attacking talent in world football. And this season the big-hitters have truly stepped up.

Harry Kane has plundered goal after goal. Mo Salah has been a revelation at Liverpool and has struck almost every week. And Sergio Agüero, as proven last weekend, can hit four goals in the space of 45 minutes.

They are three of the elite. Their talent unquestioned, their desire to score undeniable. Yet they are far from alone in the English top flight. The likes of Roberto Firmino, Eden Hazard and Jamie Vardy are also having excellent campaigns in front of goal.

But for every in-form attacker, there are those who are struggling. Confidence is king in football. Those who have it sync their skill with pure instinct. Those who don't, overcomplicate the game; they think too much instead of relying on their natural talent.

Often, but not exclusively, these players are playing for weaker or struggling sides in a division. It's at these clubs where chances may be at a premium, something which only further enhances the pressure to score when an opportunity is fashioned.

But while pressure is unquantifiable, chances missed is not. And we have crawled through the data to find out which Premier League attackers have proven to be the most wasteful in front of goal this season.

So what parameters did we set? In order to gain a fair reflection we went for players who have featured in at least 800 minutes of Premier League football this season and have a minimum expected goals (xG) – the opportunities that should be converted – of seven.

We also assessed players' expected goals ratio (xG ratio), which looks at how many goals a player is scoring for every one xG – it's a fair way of showing which players are wasting good chances and who is scoring when presentable opportunities come their way.

The table below shows the ten Premier League attackers who are underperforming in front of goal this season.

While some of the names included won't come as a surprise as they have been criticised by their own supporters this term, there are a couple of players many wouldn't expect to see in such a list. 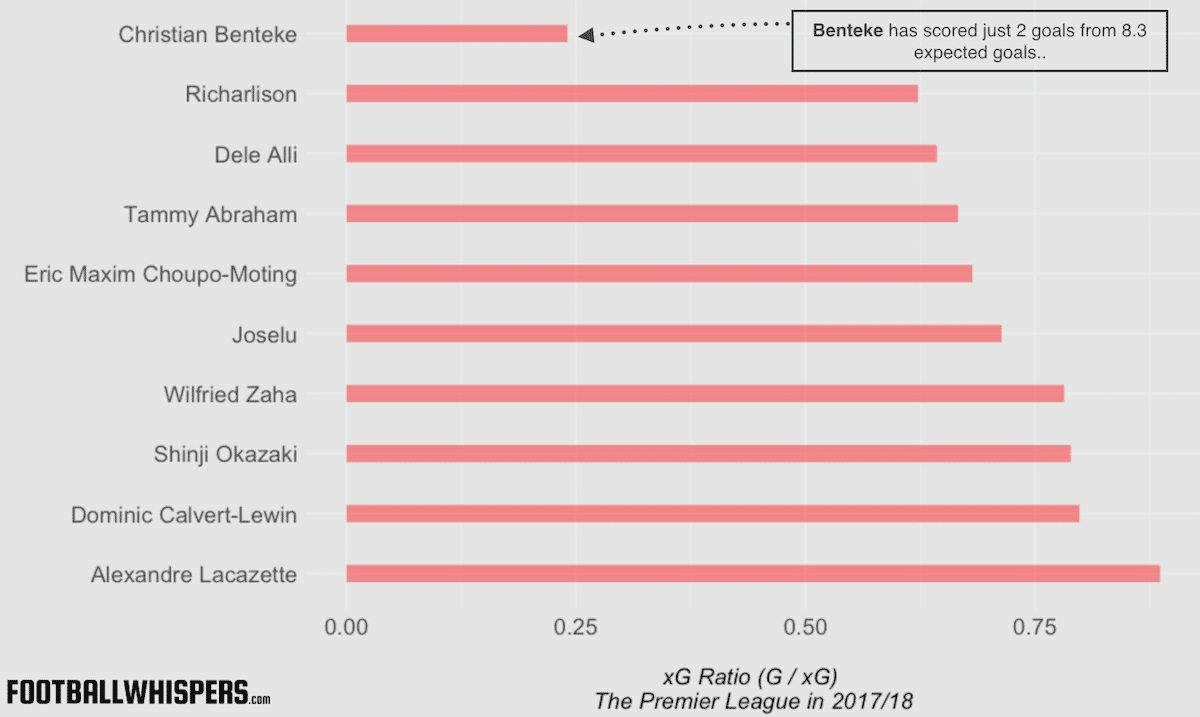 Forget the other nine names on that list for now, we're going to focus on Benteke because his numbers are, quite frankly, startling.

There is no doubting the Belgian's talent – it wasn't so long ago that he was scoring goals in an awful Aston Villa side – but this season he has been shockingly wasteful.

Benteke, who has played 1750 minutes, has scored twice for Crystal Palace during the 2017/18 Premier League campaign, against Leicester City and West Ham United. Yet his xG stands at 8.3 goals.

It doesn't take a maths genius to do the equations: Benteke is scoring just 25 per cent of his xG. It's by some distance the worst xG ratio of any Premier League attacker this season.

History suggestions Benteke is a confidence player, clearly he is lacking that at the moment. But his xG proves he is getting chances, so Palace fans will hope his form improves in the remainder of the campaign.

The second most wasteful attacker in the Premier League this term won't come as a huge surprise. Watford's Richarlison.

He is an excellent prospect, one who matches attacking flair with defensive work-rate. The Brazilian has struck five times this season, a respectable return for a player still adapting to the rigours of English football.

However, his xG of 8.03 demonstrates his lack of composure in front of goal. That was evident against Chelsea earlier in the campaign. Richarlison missed two big chances to put the game beyond the Blues, who fought back to win.

This season the 20-year-old's xG ratio stands at 0.62. Given he has been linked with moves to Tottenham Hotspur and Liverpool, improvement is required before the season's end.

Interestingly Dele Alli has lacked a clinical edge this term. The England international starred during his first two campaigns in North London but while he is still impacting the side – he has 12 assists in all competitions – he is failing to be productive in front of goal.

His five goals are short of his xG of 7.7, leaving him with a disappointing xG ratio of 0.64.

The rest of the top ten, barring Alexandre Lacazette and Shinji Okazaki, is made up of players who represent sides in the relegation battle.

For instance, it won't be a shock to Newcastle United fans that Spanish striker Joselu's xG ratio stands at 0.71. Nor will Stoke City fans be too surprised Eric Choupo-Moting, who has struck four times this season, has underperformed his xG of 5.8.

And, in truth, Gunners fans will nod in agreement with Lacazette's numbers. The French striker has scored nine times this season following his then club-record transfer from Lyon.

However, his xG for the campaign is 10.15, leaving him with an xG ratio of 0.88. While it is in the margin of error for the model and nowhere near Benteke levels of wastefulness, it perhaps explains Arsenal's decision to spend big on Pierre-Emerick Aubameyang. in January.