The Premier League kicks off on Saturday and teams are still scrambling to sign new players. The current transfer market sees many teams finding funds difficult to come by.

Aston Villa are one team with no issue finding money. The Villains transfer spend is over £100 million. The club have now agreed on a deal for a new goalkeeper on top of the talents already signed in the market.

Aston Villa and Chelsea are leading the Premier League spending spree table this offseason. Will it have an effect on their final league table positions?

Where is Aston Villa getting the money? For the second straight offseason, the Villains have spent heavily on players. The latest signing is goalkeeper Emiliano Martinez, who arrives from Arsenal after helping the club win the FA Cup trophy and FA Community Shield on penalties.

Arsenal’s decision to sell Martinez is shocking. What more did the shot-stopper have to do to earn the No. 1 shirt? Bernd Leno’s injury last season was unfortunate. However, Martinez proved himself to be a better goalkeeper for Arsenal when given the opportunity.

Manager Mikel Arteta wants to keep Martinez, but with Leno to play against Fulham this weekend, the Argentine isn’t ready to commit his future to the Gunners. Football Whispers understands that Arsenal and Aston Villa have agreed on a £20 million fee. Martinez just needs to agree on personal terms and the move will be complete. Martinez won’t be available against Manchester United at the weekend but should be ready for matchday 2 against Sheffield United on September 21st.

Tottenham Hotspur held preliminary talks with Serie A’s Napoli over the transfer of striker Arkadiusz Milik this week. The Italians gave Spurs the greenlight to speak with the player and a deal could be finalised this weekend.

Milik is coming off of two impressive Serie A seasons in which he tallied 17 goals in 2018-19 and 11 in 2019-20. Although his goalscoring total took a step backwards last term, Napoli’s roller-coaster season under Carlo Ancelotti and Gennaro Gattuso can be blamed for it.

Football Whispers understands that Napoli cut their asking price for Milik to just £14m. According to his transfer valuation from Transfermarkt, Milik is worth double that amount. However, the 26-year-old centre-forward has less than 12 months on his current contract.

Jose Mourinho wants to add more firepower in attack. His top scorers Heung-min Son and Harry Kane are both injury-prone. Adding a third lethal scorer could get Spurs back into the top four. Leading sportsbooks have Milik to Tottenham Hotspur at odds of 2/1.

Chelsea have shelled out £200m on new players this offseason and the spending spree isn’t over yet. Manager Frank Lampard wants a goalkeeper after record-goalkeeper signing Kepa Arrizabalaga’s performances were deemed unacceptable. It is funny that former manager Maurizio Sarri complained about the shot-stopper but it wasn’t until Lampard bemoaned Kepa’s play that everyone took notice.

Rennes goalkeeper Edouard Mendy is on Chelsea wishlist and Football Whispers understands that a deal is nearly finished. Mendy will move to Chelsea for £18m. The Rennes man is a low-priced move compared to other goalies they were linked with. Burnley’s Nick Pope and Atletico Madrid’s Jan Oblak were on the Chelsea wishlist. However, Mendy is far cheaper and should provide competition to Kepa and Willy Caballero.

Mendy kept nine clean sheets in 24 Ligue 1 appearances last season. He started the new Ligue 1 campaign in goal but sat out the team’s matchday 2 win against Montpellier with the decision over his transfer to Chelsea pending. 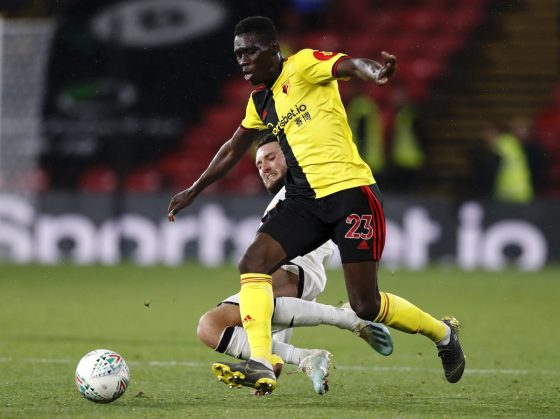 It may seem out of left field, but Watford forward Ismaila Sarr is on Liverpool’s radar. Sarr is Watford’s club-record signing at £25m, but didn’t live up to expectations last term. He still scored five goals and added four assists in 28 appearances. Watford are now ready to offload Sarr to combat the financial problems incurred with Premier League relegation.

Sarr’s best performance of the 2019-20 season came at Vicarage Road against Liverpool. He scored twice and assisted a goal as Watford won 3-0.

Watford have publicly stated that they want to keep Sarr. However, he will miss the club’s EFL Championship curtain raiser against Middlesbrough. His omission adds fuel to the fire of a potential move to Liverpool.

Leading sportsbooks have Sarr to Liverpool at odds of 7/4. Crystal Palace are also in the talk to sign Sarr and are listed at odds of 9/2.

The Gareth Bale to Premier League transfer saga continues this summer as the Welshman seeks an end to his time in Spain. Bale’s appearance and antics on the Real Madrid bench at the end of last season appeared to be a cry out for a Premier League club to sign him.

Bale made just 16 La Liga appearances for Real Madrid as the club won the Spanish top-flight title. Now 31, pundits continue to call for a Premier League club to bring Bale “home”. There are myriad problems with signing Bale and the price tag is just one of them. Bale earns £600,000-per-week pre-tax and is under contract in Madrid until 2022. He is currently valued at £25.20m, according to Transfermarkt. Reports indicate Manchester United could get him for as little as £22m, but must take on Bale’s incredibly high salary.

Manchester United’s current highest earner is David De Gea at £300,000-per-week. Bale would earn double that salary. Money isn’t the only issue. Bale is 31-years-old and has a terrible track record of injuries. Moving to the much more physical Premier League could see further injury issues. Although this deal could happen, it seems unlikely to occur. Spending heavily on Bale could damage hopes of signing Jadon Sancho in 2021.