The Premier League transfer window rolls on and one of the league’s clubs have made a shock move for a world-class playmaker. The rumours and news are coming fast and furious with just over a month to go until the transfer window closes. The 2014 World Cup was James Rodriguez’s coming out party as he had an excellent tournament for Colombia. Rodriguez’s play inspired Real Madrid to shell out around £63 million for the Monaco playmaker. Rodriguez’s move came after just one season at Monaco where he scored nine goals and tallied 13 assists in 34 Ligue 1 games.

Rodriguez never fitted with Real Madrid and was constantly in Zinedine Zidane’s doghouse. Los Blancos even loaned him to Bayern Munich for two seasons, which were more miss than hit. Now, seeking a new challenge and playing time, Rodriguez has agreed to a cut-price move to Everton. He will be reunited with former coach Carlo Ancelotti at Goodison Park. Ancelotti is said to have been vital in Rodriguez joining the Merseyside club.

Football Whispers understands that Rodriguez has signed a three-year deal which will take him to the age of 32 when it expires. Rodriguez will attempt to resurrect his career at Goodison Park. He is joining a club with new ambitions under Ancelotti.

With Liverpool having so much success over the last few years, Everton are seeking more relevance on Merseyside. Rodriguez’s past with big clubs on the continent makes it possible to be more relevant in the city of Liverpool. Rodriguez only made eight La Liga appearances last season for Real Madrid.

Pep Guardiola continues to overhaul his defence at Manchester City. After conceding 35 goals – two more than Liverpool – in the league and looking defensively dismal against Lyon in the Champions League quarterfinals, Guardiola is ringing the changes. Manchester City have already signed Nathan Ake from Bournemouth for £41m and now, could add another elite defender to the fold.

Napoli’s Kalidou Koulibaly has long been on the transfer target list of Premier League clubs and Guardiola is ready to pounce. Transfermarkt value Koulibaly at nearly £60m and is Napoli’s No. 1 ranked player in terms of market price. Guardiola’s defensive signings have not bathed the manager in genius since arriving at Manchester City. He has spent over £345m on defenders alone.

Koulibaly is an elite centre-back and his performances in the Champions League last term showed how strong he is against top attacking players. Manchester United are also linked to Koulibaly’s signature. The centre-back's addition could make it difficult to land Lionel Messi, however.

According to the latest betting odds, Koulibaly is 1/4 to join Manchester City and 16/1 to sign with their crosstown rivals Manchester United.

Manchester United are also in the market for defensive upgrades. Victor Lindelof and Harry Maguire have been a decent duo at the back, however, manager Ole Gunnar Solskjaer needs an elite centre-back to put in the heart of defence.

Maguire was solid for Manchester United in his first season at the club. There is no doubt he improved the club’s defence, but in big games such as the FA Cup semifinal versus Chelsea and Europa League semifinal against Sevilla, the Red Devils’ defensive weaknesses showed.

RB Leipzig’s Dayot Upamecano could be the answer to Manchester United’s problems. Upamecano shined for RB Leipzig in the Champions League as the Germans reached the semifinals. RB Leipzig do sell top players for the right price and could depart with Upamecano with the transfer window still open until October 5th. Football Whispers understands that it could take up to £80m to sign Upamecano.

Upamecano is 2/1 to join Manchester United, according to leading sportsbooks. Meanwhile, Arsenal are also linked to him. The Gunners are 4/1 to make the signing of the defender. 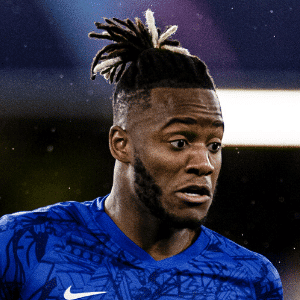 Newly promoted West Brom are in the hunt for a Premier League quality striker and Chelsea’s Michy Batshuayi is on their shopping list. Just two summers ago, Batshuayi was valued at £50m, but now, according to Transfermarkt, is worth less than £13m. Still just 26-years-old, the Belgian striker has plenty of time to fulfil his potential.

Batshuayi has just one season left on his contract at Chelsea. If last season was anything to go by, manager Frank Lampard sees the striker as surplus to requirements at Stamford Bridge. Batshuayi did make 16 league appearances for Chelsea in 2019-20. He scored one goal and added an assist. His expected goals figure was 3.04 meaning he was –2.04 in goals during the Premier League campaign.

The Belgian spent 18 months on loan at Borussia Dortmund, Valencia, and Crystal Palace between January 2018 and May 2019. His time at Dortmund and Crystal Palace were successful but didn’t inspire either team to sign him permanently. Now, it is likely Chelsea will sell him for a cut-price to get his wages off the books.

West Brom are rumoured to be competing with Wolverhampton Wanderers, Atalanta, and West Ham for Batshuayi’s signature.

Liverpool supporters have known for some time that winger Harry Wilson has not been in the club’s plans. Wilson had a successful loan at Derby County in the Championship in 2018-19 scoring 16 goals in 43 league games. He followed it up with a loan to Bournemouth last season which was less successful with seven goals in 31 Premier League matches. Now, the Reds are ready to part ways with the academy graduate.

Their stance on Wilson is much like last summer’s sale of Ryan Kent to Rangers. Liverpool are in no rush to sell Wilson and claim a sale is the only option this summer. Aston Villa are in the market for further upgrades in attack. In spite of spending heavily last season on forwards, the Villains are now ready to splash the cash again.

Liverpool want a minimum of £20m for Wilson. Don’t expect the Reds to cut that price. They will hang onto Willson unless a price they want comes in for him. According to one source, it is believed Liverpool will wait for Premier League teams to become desperate for attacking players before agreeing a transfer.

Aston Villa are 10/1 to sign Wilson as Leeds United are also in the market for the player at odds of 11/4. Marcelo Bielsa is looking at the signature of former Liverpool academy player Kent and Udinese playmaker Rodrigo De Paul as well.