The Premier League season kicks off on Saturday with a weekend full of games. Clubs are finalising transfer deals to get new players into their teams for the league’s kick-off. Newcastle United are suddenly in the market to improve the squad for an assault on the top half of the table.

Chelsea, Liverpool, and Arsenal are also in the transfer news headlines. All three could sell players to fund further transfer signings before the October 5th transfer deadline.

Football Whispers takes a look at today’s big headlines and potential Premier League transfers. The season is just days away. Will any of these deals get done before the season kicks off?

Steve Bruce’s team have suddenly put together some exciting transfer deals as the league season approaches. Lewis joins Callum Wilson and Ryan Fraser at Newcastle United as each player sealed their transfers this week.

Newcastle United showed promise last season but lacked consistency. They tallied 44 points on an expected point tally of 31.92. Although Newcastle United’s transfer business has been on a budget, they have done good work thus far. Can Bruce get Newcastle United near the top six? It could be possible in a wide-open Premier League this season.

Michy Batshuayi is an outcast at Chelsea under manager Frank Lampard. Currently the fourth choice striker at Stamford Bridge, Batshuayi is set to leave the club. Football Whispers understands Chelsea want to extend Batshuayi’s current contract before loaning him out to Crystal Palace.

The Belgian played on loan at Selhurst Park during the second half of the 2018-19 Premier League season. He scored six goals in 13 appearances. Crystal Palace scored a mere 31 goals in 38 Premier League games last term. They desperately need a goalscorer and Batshuayi’s history with the Eagles boasts well that he can do it once more.

Batshuayi may have limited chances at Chelsea, but that didn’t stop Belgium national team coach Roberto Martinez from calling him up for the latest round of UEFA Nations League games. The striker proved his worth to Martinez scoring twice against Iceland on matchday 2 of the UEFA Nations League. Crystal Palace could see big improvements in the final third if Batshuayi arrives. 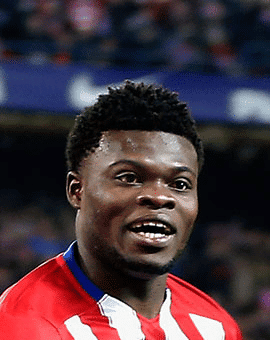 Arsenal are in the hunt for a new defensive midfielder and Atletico Madrid’s Thomas Partey is high on their list. Manger Mikel Arteta placed midfielder Matteo Guendouzi in the doghouse in the second half of last season. Guendouzi ran afoul of the manager due to personal and professional issues. Arsenal attempted to swap Guendouzi for Lyon’s Houssem Aouar, but French club Lyon shot down the idea of trading the players.

Football Whispers understands that Paris Saint-Germain are interested in Bellerin, but they are not the only club to express interest. Barcelona approached Arsenal over Bellerin’s signature. Arsenal want €20m to €25m for the defender. Atletico Madrid value Partey at around €25m. Partey wants to leave the La Liga team and it is claimed will force through a transfer to the Gunners.

According to leading sportsbooks, Partey is 2/5 to join Arsenal. Manchester United are also linked to the midfielder at odds of 16/1.

Sheffield United scored just 39 goals last season which was the fewest of any team to finish in the top 12. If Sheffield United had scored more goals, they may have finished in the top six. Manager Chris Wilder is in need of a goalscorer and Liverpool are now exploring the sale of striker Rhian Brewster.

Now, Brewster could leave Anfield once more, but on a permanent transfer to Sheffield United. Football Whispers understands that Liverpool would place a buy-back-clause in the contract of any transfer for Brewster.

Newcastle United, Crystal Palace, and Aston Villa are all in the conversation to land Brewster. However, Sheffield United’s approach for the striker makes a lot of sense due to their strong need for a goalscorer. Leading sportsbooks have Brewster to Sheffield United at odds of 3/1, while Newcastle United are 18/1.

Paris Saint-Germain are ready to cash-in on goalkeeper Alphonse Areola and Fulham are the most likely destination. Fulham can sign Areola for the low price of £8m. The goalkeeper is surprisingly low paid for a Paris Saint-Germain transfer star at just £150,000-per-week. His wages are not something impossible for Fulham to cover in the Premier League.

Fulham’s transfer spending has been far more subdued compared to their previous offseason after achieving promotion. The Cottagers board approved a ridiculous spend of over £100m ahead of the 2018-19 offseason. Players such as Jean Michael Seri, Andre-Franck Zambo Anguissa, and Andre Schurrle. The spend was a complete waste that fractured the team spirit that existed in the EFL Championship.

Areola started the 2019-20 season with Paris Saint-Germain before heading off to Real Madrid on loan. He recorded five clean sheets in 13 appearances in all competitions.