The 2017/18 Premier League season has been one of the best since the inception of the competition back in 1992.

The race for the Golden Boot has also been an intriguing sub-plot which has taken centre stage at times. Such competition throughout the campaign meant the Team of the Season resulted in a lot of discussion.

The PFA revealed their results, which can be found here, at the end of April and it's been a hot topic of debate ever since.

With this in mind, we've decided to put together our own Team of the Season. Here at Football Whispers we have a ratings systems; scores for each player are based on how their actions impact the chance of winning a match.

The only requirement to be considered was the player had to have appeared in over 2,000 minutes this season.

The Football Whispers Team of the Season 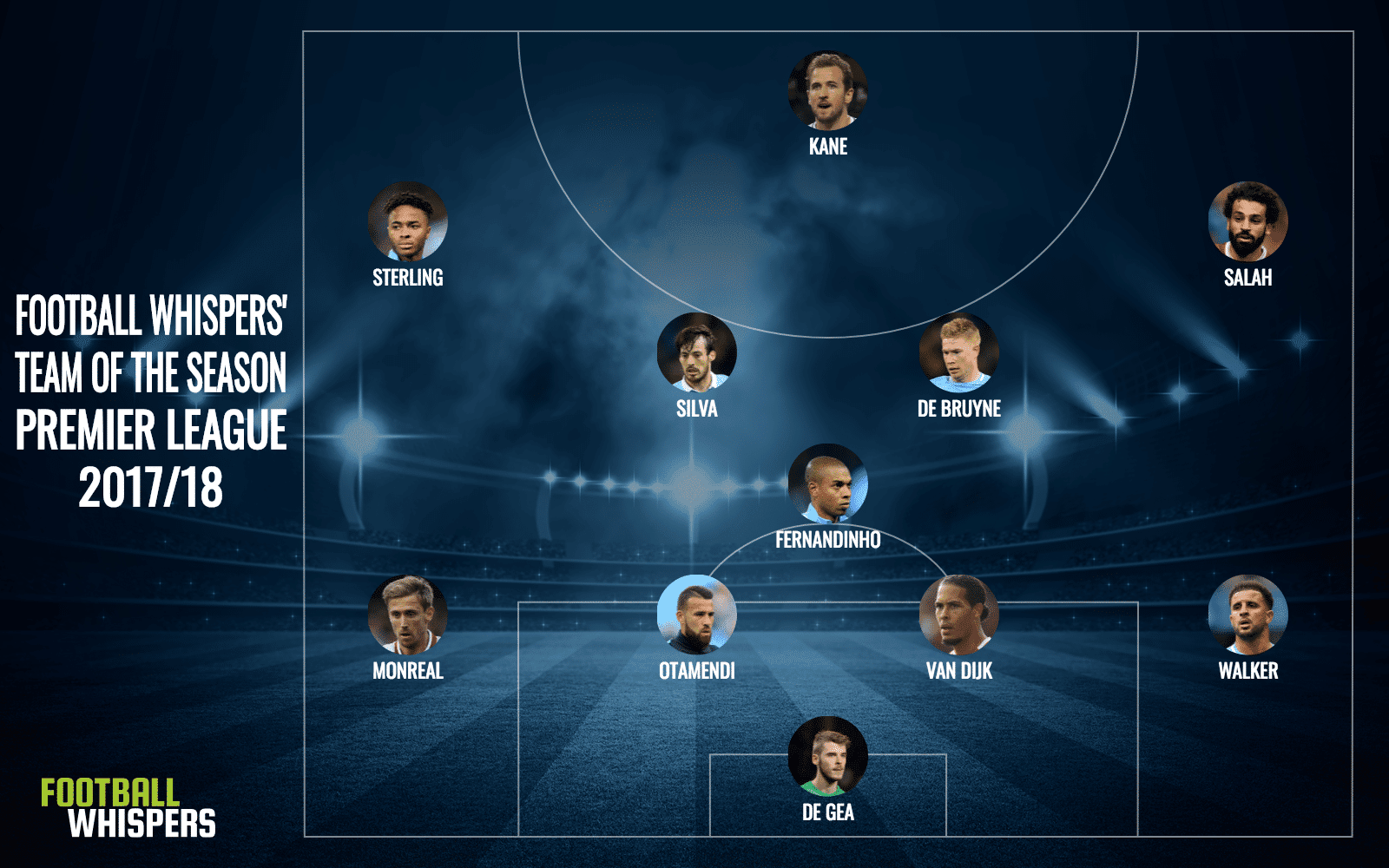 Between the posts there is only ever one winner. The Real Madrid transfer target is one of main reasons Manchester United find themselves in second position. De Gea, ranked as an 86, has single-handedly kept the Red Devils in matches on a number of occasions this term and no shot-stopper in the top flight can better his post-shot xG numbers.

Walker and Otamendi, both on 88, are the highest ranked players in their positions. The Argentine centre-back is having the best campaign of his career under Pep Guardiola while the England right-back has slotted seamlessly into the system at the Etihad.

Virgil van Dijk, who had a rocky few months with Southampton after his summer move to Liverpool fell through, has looked like a new man since his January switch to Anfield.

He's the second highest rated (84) centre-back with over 2,000 minutes to his name. His influence on the backline was recently detailed in a feature which can be viewed on YouTube.

Nacho Monreal is the shock inclusion on the list. The Gunners haven't had the best of seasons and the Spaniard has spent time at centre-back. But his rating of 87 sees him pip Marcos Alonso and Ben Davies to the left-back berth. And looking at the stats this season it's justified. 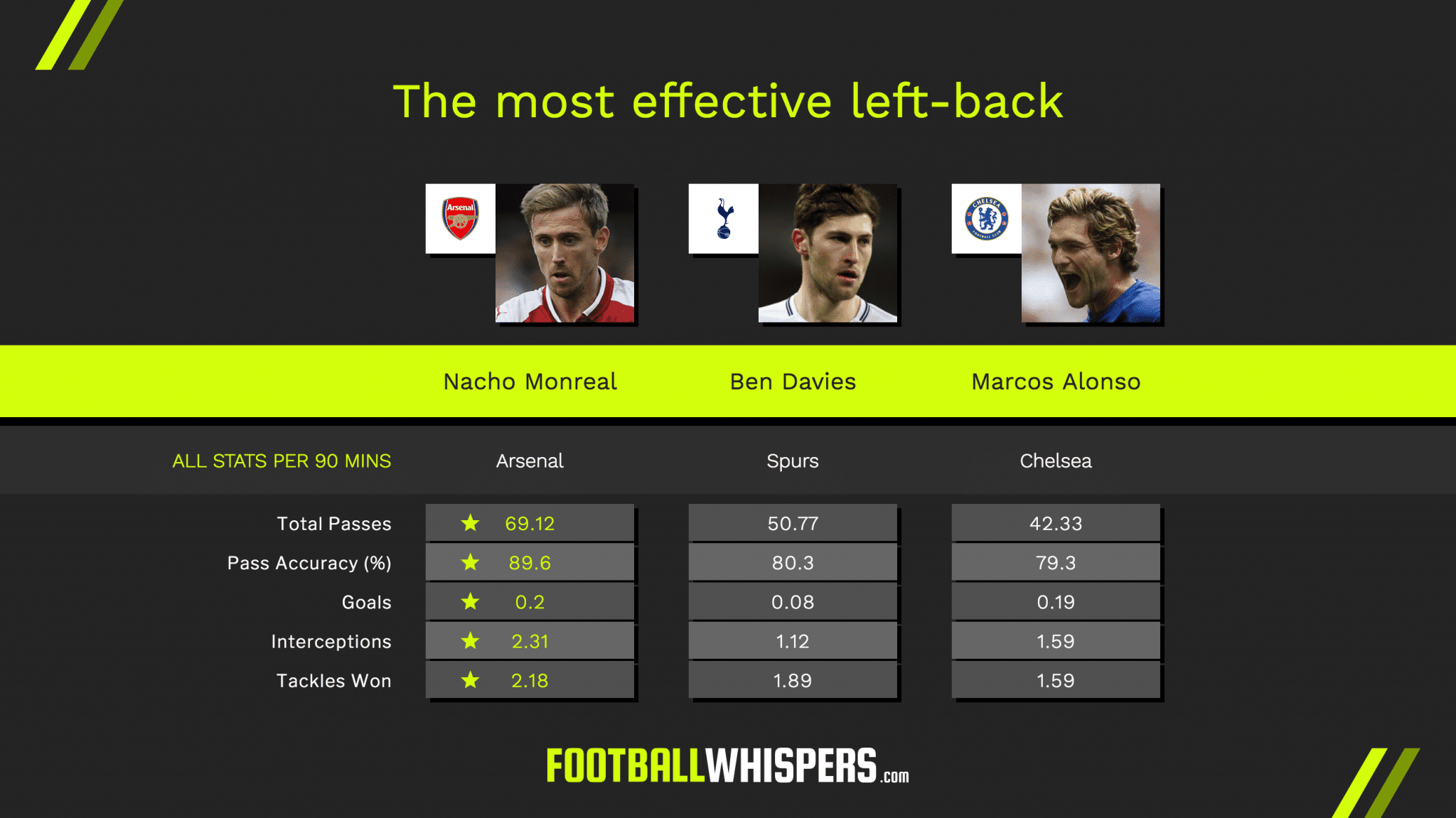 As previously mentioned, the ratings are based on how a player's actions impact their team's chance of winning a match. The stats we've used are ones we feel help influence proceedings going forward.

The 32-year-old is involved in the build-up play, attempting more passes and having a higher pass success rate. He's scored more goals per 90 minutes and wins more tackles and interceptions.

When looking at expected numbers, Davies comes out on top in terms of expected goals and expected goals assisted per 90, but his advantage over the Arsenal man is just 0.02. As an overall package, the former Malaga full-back has been the real deal this season.

Christian Eriksen is unfortunate to miss out on a place in midfield after his fine performances, which have seen him involved in 20 goals in the Premier League.

Mauricio Pochettino's playmaker scores an 84 in the rankings, but that's three shy of De Bruyne and seven short of Silva. Amazingly, the versatile Dane is eight points behind Fernandinho. It's why replacing the ageing former Shakhtar Donetsk man in a few years won't be as easy as people think.

Salah, his 40 goals involvements and his rating of 92 make the team along with Harry Kane, his 90 rating and his questionable 27 strikes. Sergio Agüero, who has found the net 21 times this season and has a rating of 90, doesn't make the final cut because he's not appeared in 2,000 minutes in the Premier League. 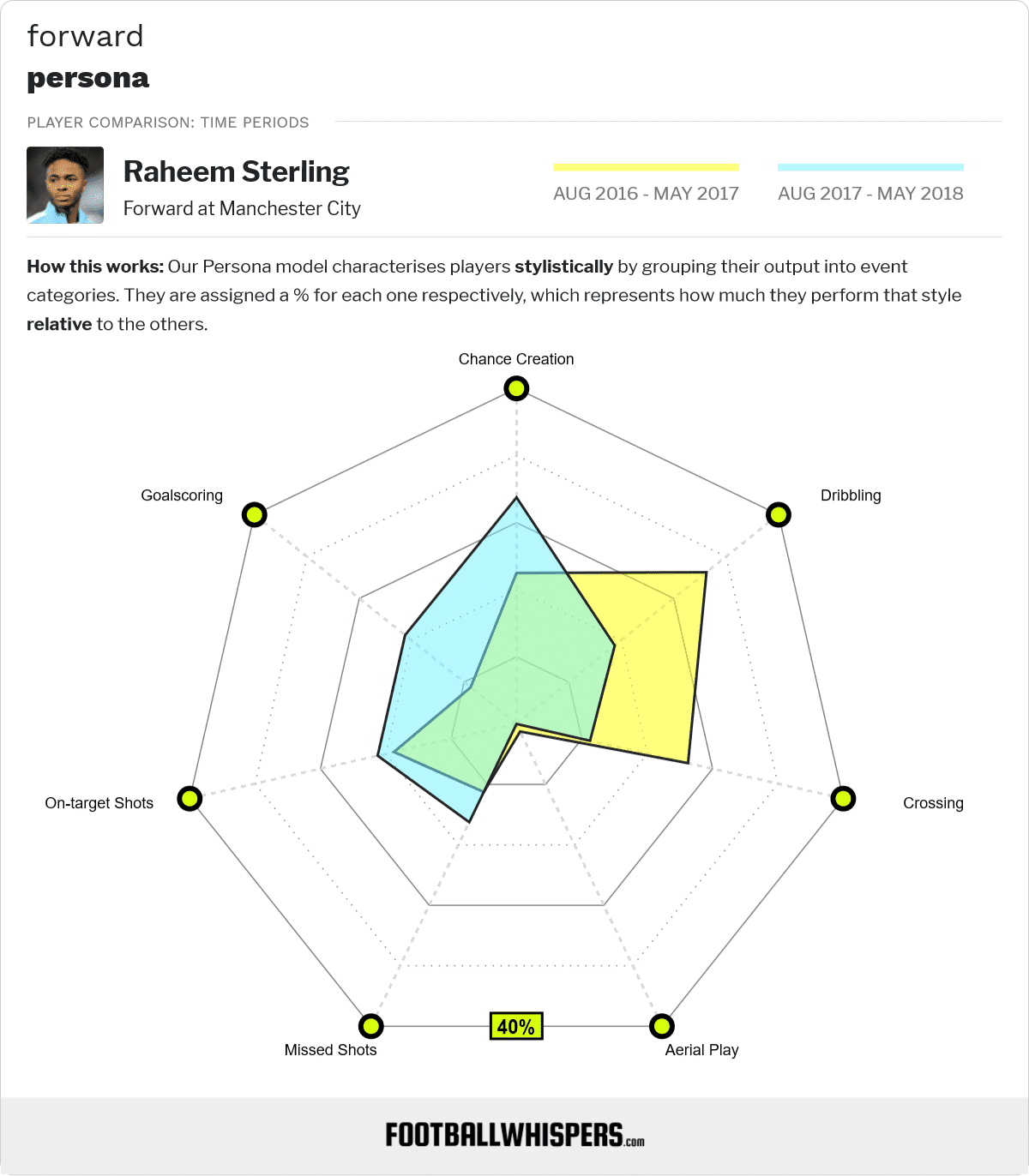 As discussed in a detailed profile on the former Liverpool man, Guardiola has tweaked the role that the 23-year-old has in his team. It's evident in his player persona above, too.

Sterling was once a winger and his style backed it up. Now he's matured into a goalscorer and an elite chance-getter.

His rating of 91 comes primarily from the fact he's been involved in 29 goals in the English top flight this season, a tally only Salah can better. His place in our Team of the Season is deserved and justified.

Is this a fairer one to the team the PFA named? Let us know your thoughts by tweeting us @FB_Whispers.