Alan Hansen famously said ‘you can't win anything with kids.' Although Manchester United emphatically disproved such an assessment, you could see where the pundit was coming from.

Hansen's statement continues to be debated widely but what can't be argued is the simplest of footballing axioms: you can't win anything if you don't score.

If only the act of putting the ball in the net was as simple as the logic. Luckily for Premier League fans, English football has some of the finest finishers in the game. Goals equate to entertainment and there are a clutch of deadly marksmen that have provided a large portion of the thrills this season.

The life of a top-flight striker is at once exhilarating, infuriating and forlorn. The quest for goals is a treacherous one, but it is usually helped by hitting shots – and lots of them. Of course, it helps even more if a striker has a dead-aim but, generally speaking, peppering the goal with efforts will result in goals.

Strikers low on confidence may tend to be shot-shy but we've cracked the stats to reveal the top ten trigger-happy forwards in the Premier League. The metric we've used for this is total shots attempted per 90, with players who have played at least 20 per cent of available minutes in this Premier League campaign being qualified for ranking.

There are surprises in this list. This is not one of them. As one of world football's most renowned goalscorers, it's no surprise to see Kane topping this particular chart.

The Tottenham Hotspur frontman averages 5.53 scoring attempts per 90 minutes. He also has the most shots on target per match with 2.1 but he has also missed 17 big chances. In addition, Kane's shot placement ratio (post-shot xG/xG) stands at 1.0, which places him 49th.

In other words, while Kane has enjoyed another prolific season with 27 goals to his name, he has only slightly surpassed expectations with an xG of 24.06. In contrast, last season Kane scored 29 league goals with an xG of 12.9.

With Álvaro Morata struggling, Chelsea bolstered their strikeforce with Giroud in January. It's been a solid investment, too, with the Frenchman scoring four goals in 14 games, including a recent brace against Southampton and a goal in the FA Cup semi-final against the same opposition.

Giroud is the closest to Kane's shots attempted average, with 4.94. The 31-year-old has played significantly fewer minutes than the Spurs man but, when he plays, he shoots.

Interestingly, Giroud's shots attempted tally is much higher than last season's 3.01. In the first half of the season, while still playing for Arsenal, the forward managed an average of 4.33 attempts but has improved that in West London, with 5.51.

An instant Liverpool hit and already on the fast-track to becoming a club legend, Salah has been too hot for goalkeepers to handle in his first season with the Reds.

His total shots attempted per 90 is 4.55. He has outscored his xG by 12 goals, though, unlike Kane, finding the net 31 times from an xG of 19.01. He has also improved the quality of his chances with his shot placement ratio of 1.17, while his post-shot xG per 90 is the third-highest in the league with 0.72.

The Egyptian is just one goal away from breaking the all-time Premier League record for 38-game seasons and, if Salah can fire Liverpool to Champions League glory, it will cap one of the great individual campaigns of our time. 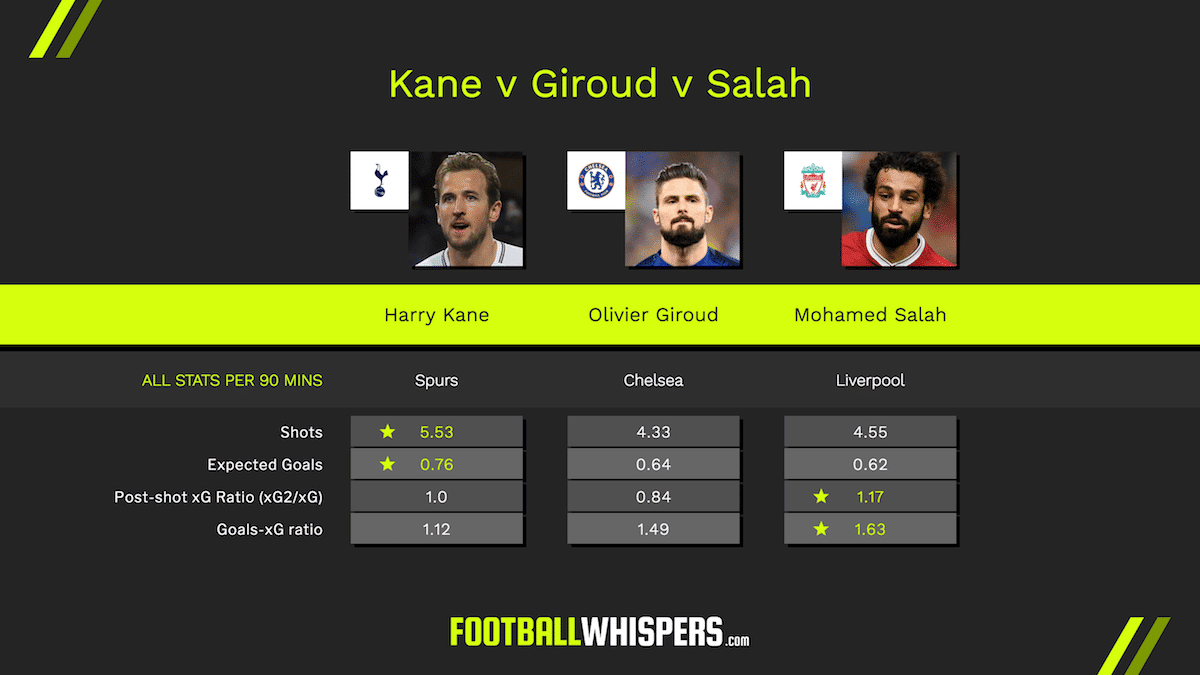 Manchester City's No.10 has been terrorising Premier League defenders for years now and, despite battling injury and competition from Gabriel Jesus, he's still contributed 21 goals to their title-winning campaign.

Agüero is exceptionally adept at finding pockets of space, running off the defender's shoulder and anticipating where the ball will end up at the end of an attack, so it's not surprising to see his shots attempted per 90 at a healthy 4.29.

The 29-year-old has surpassed last season's league haul of 20 and also bettered his shot placement ratio, with 1.02 compared to 0.79. Agüero has also outperformed his xG of 14.38, whereas last year he just failed to match 21 expected goals.

Strength, good movement and clinical finishing make Austin one of the most formidable strikers in the division. However, injury has ravaged his time at Southampton. The 28-year-old has failed to reach 20 appearances in a season for the Saints.

With 18 so far this season, he can finally achieve it if he features in two of their remaining three games, but there will certainly be a hope among the club's fans that, whether they're in the top or second-tier next season, Austin sticks around.

Austin's xG of 6.03 places him 38th but the fact that his post-shot xG per 90 is fifth-highest with 0.68 suggests that he is an effective finisher when the opportunity arises.

The Spaniard has endured mixed fortunes during his first season in England. Fifteen goals in all competitions is by no means the return of a flop but, given that he cost Chelsea a club-record £60million, the Blues can be excused for having expected more.

Morata has only found the net once in the league in 2018 but it has not been for the want of trying. The Juventus transfer target has managed 3.48 shots per game and while his tally of 11 goals is lower than his xG (12.21), his post-shot xG is actually seventh-highest in the league at 12.85.

The 25-year-old has had his troubles on and off the field this season but, if he manages to settle and recapture his early-season confidence, he can have a bright future at Stamford Bridge.

Like Austin, it's been another campaign beset with injury troubles. A variety of knocks and niggles have restricted Carroll to just 14 league appearances – 707 minutes – for West Ham United, scoring three goals.

The 29-year-old usually engineers shooting opportunities, though, averaging 3.43 shots per game. It's interesting because the Hammers do not hit a lot of shots. With 335 in total and 8.8 per game, only Swansea City have managed fewer.

When Carroll plays he offers the Hammers a genuine focal point in attack and, if they find him, he usually tries his luck. Like Austin, Carroll can be a weapon when he's fully fit and firing but, unfortunately, an endless succession of fitness issues have blunted him over time. 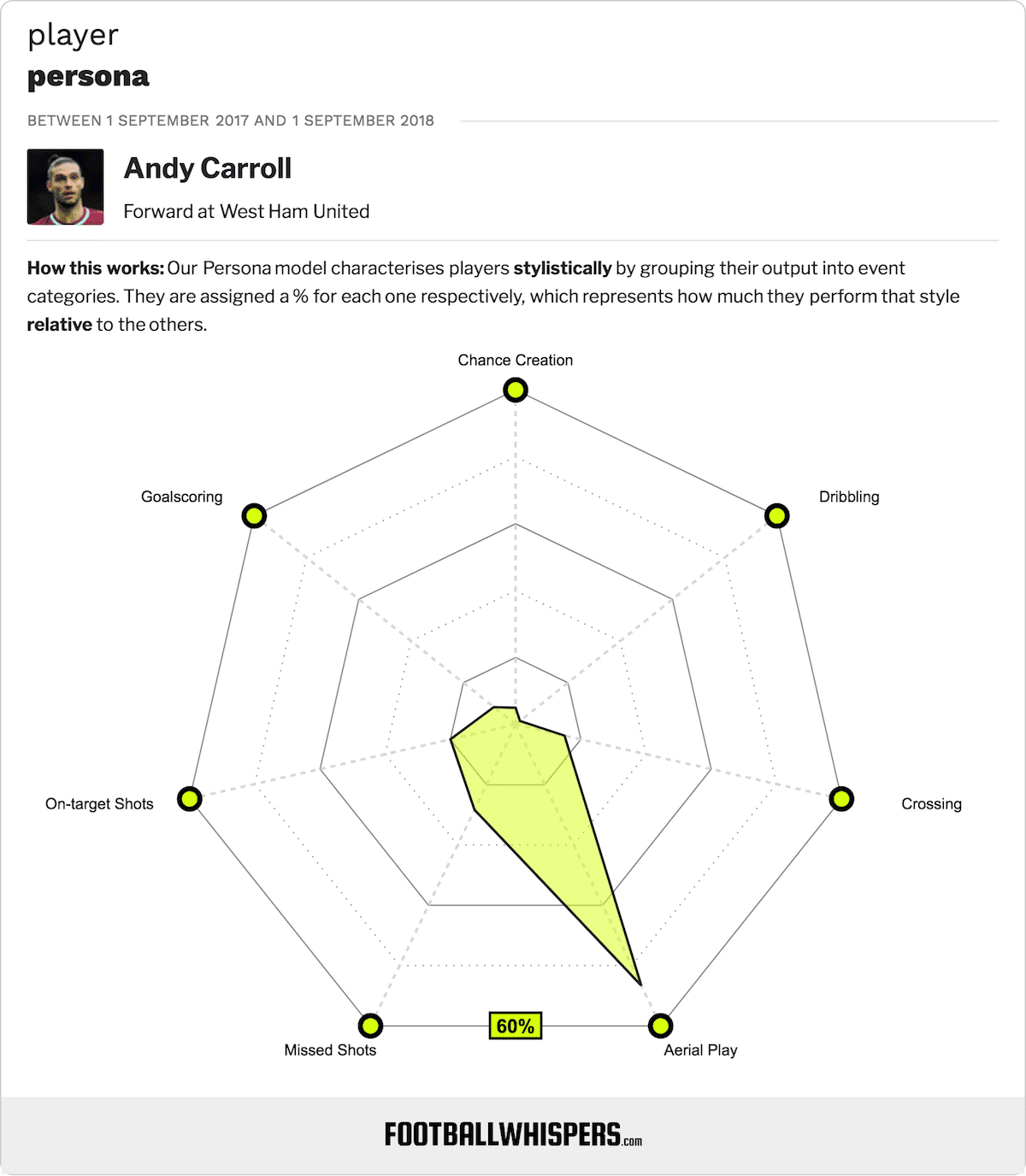 The third Chelsea player breaking into the top ten, Pedro is another who has not seen as much action as in previous seasons, with just 1455 minutes under his belt. He is usually very positive in the shots department, however, with 3.34 per game.

The Spaniard has just four goals from 28 appearances and, with an xG per shot of just 0.07 – placing him 134th – we can perhaps get a clearer sense of why he has spent most of this season staring at the back of Antonio Conte's head.

Like West Ham, Burnley do not take a lot of shots, averaging less than ten per game (placing them 16th overall). Sean Dyche's Clarets have had an outstanding season but it has been built largely on stout defending and a rigorous application of various game-plans rather than scintillating attacking.

Vokes hits more shots than anyone at Burnley, but he is not their top-scorer. With nine apiece, Ashley Barnes and Chris Woods are, but they have played a lot more than Vokes' 883 minutes.

Vokes has four goals with an average of 3.26 shots per game while his goals-xG ratio is 1.54, placing him comfortably inside the top 20. Burnley supporters will hope they can see more of the Vokes who bagged a brace against Chelsea on the opening day of the season in the future.

With nine goals across his time at Arsenal and Manchester United Sánchez is on course for his most underwhelming goal tally in his four seasons in England.

Whatever way you look at it, the Chilean has simply not been as devastating as he was last season, in which he scored 24 times.

Sánchez is still the most shot-happy player at United, however, with his average of 3.22 edging out Marcus Rashford's 3.12.

Interestingly, Sánchez's average of 1.66 for United this season is a drastic drop from the 4.12 he managed in his final half-season with Arsenal. As a team, United average fewer shots than Arsenal so that's not out of place, but it is eye-opening that Sánchez has been restricted since he arrived at Old Trafford.