Barring a miracle, Huddersfield Town – 14 points from safety, 11 points on the board, two wins all season – will be relegated from the Premier League this season. Fulham, with as many points as league defeats (17) look very likely to join them.

That leaves just one spot of doom remaining.

There are a full half-dozen teams circling the Premier League plughole, though. In descending order, they are: Crystal Palace, Brighton and Hove Albion, Burnley, Newcastle United, Cardiff City and Southampton are separated by just three points.

In terms of squad strength, none would be too much of a surprise if they waved goodbye. But who will it be?

Good news then for Roy Hodgson… or perhaps we should rephrase. It's ‘not Palace' on the priviso they start scoring goals.

The Eagles are the only team in those six strugglers to have something resembling a healthy expected goals difference; they’ve been trundling along in midtable all season. 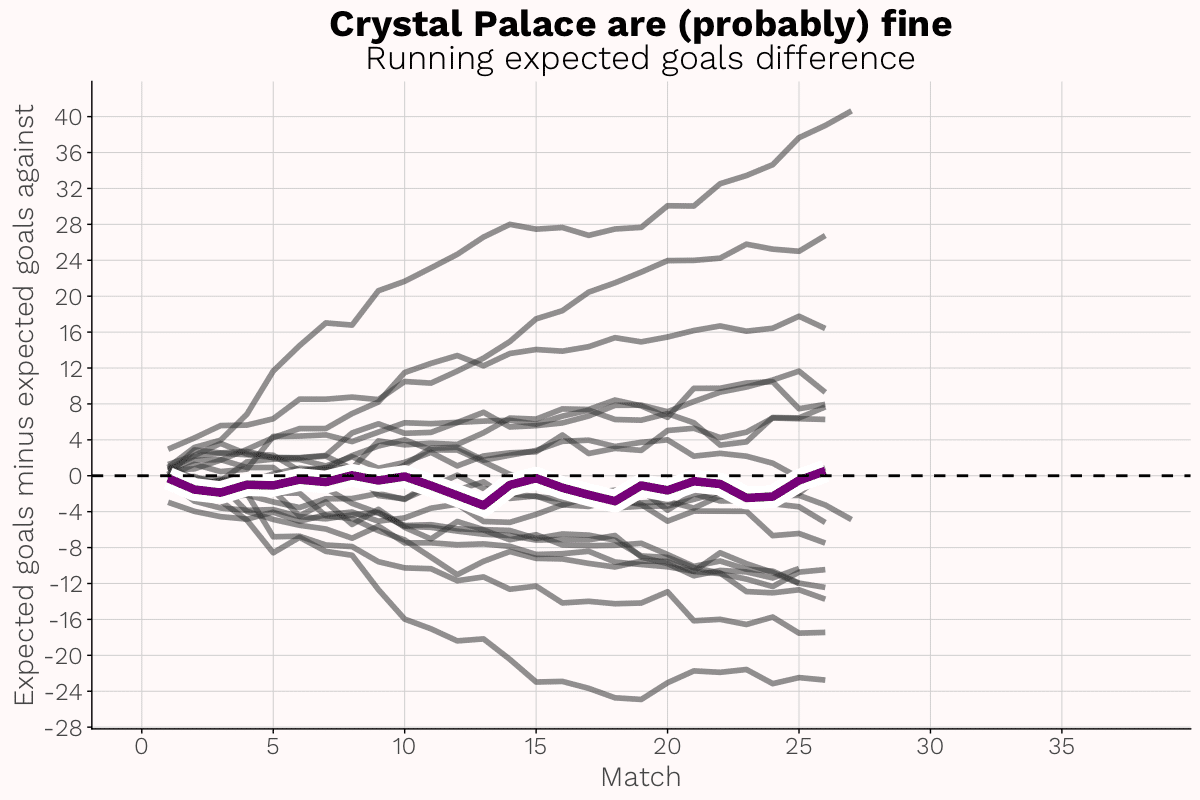 The reason they haven’t been snugly in the warm embrace of Premier League mediocrity though is they keep missing good chances.

Palace have the second-worst ratio between their expected goals and their actual goals. They’ve scored just 20 from chances worth 31.4 xG. There are very few words for that but one of them is hapless.

Still, they should have the quality to stay up, particularly with Michy Batshuayi now in their ranks.

Ralph Hasenhüttl is a good manager, right? Southampton are Too Good To Go Down, right?

Southampton are weird. They beat Arsenal in Hasenhüttl’s first home game in charge, drew 0-0 with Chelsea at Stamford Bridge and have also beaten Everton and Leicester. And yet their last three games reads draw with Crystal Palace, draw with Burnley, defeat to Cardiff.

The Hughes vs Hasenhüttl table is a bit of a downer for Southampton fans, but there’s a glimpse of light. Things look a lot better when shot placement is factored in, giving the Saints a boost in attack and defence under the new manager.

This could be a bit of luck that’s going to run out, or it could be a sign that the counter-attacking football is giving them an advantage that the regular xG isn’t picking up.

Most likely, it’s a bit of both. Southampton’s season might depend on which side holds the balance.

Newcastle, like Southampton as well as Brighton and Cardiff, have been on a similarly downwards sloping trajectory all season.

The four teams are best buddies looking at their running expected goals differences. So tightly they are together, they make everything look a mess –Southampton are red, Newcastle black, Cardiff darker blue, and Brighton lighter blue. 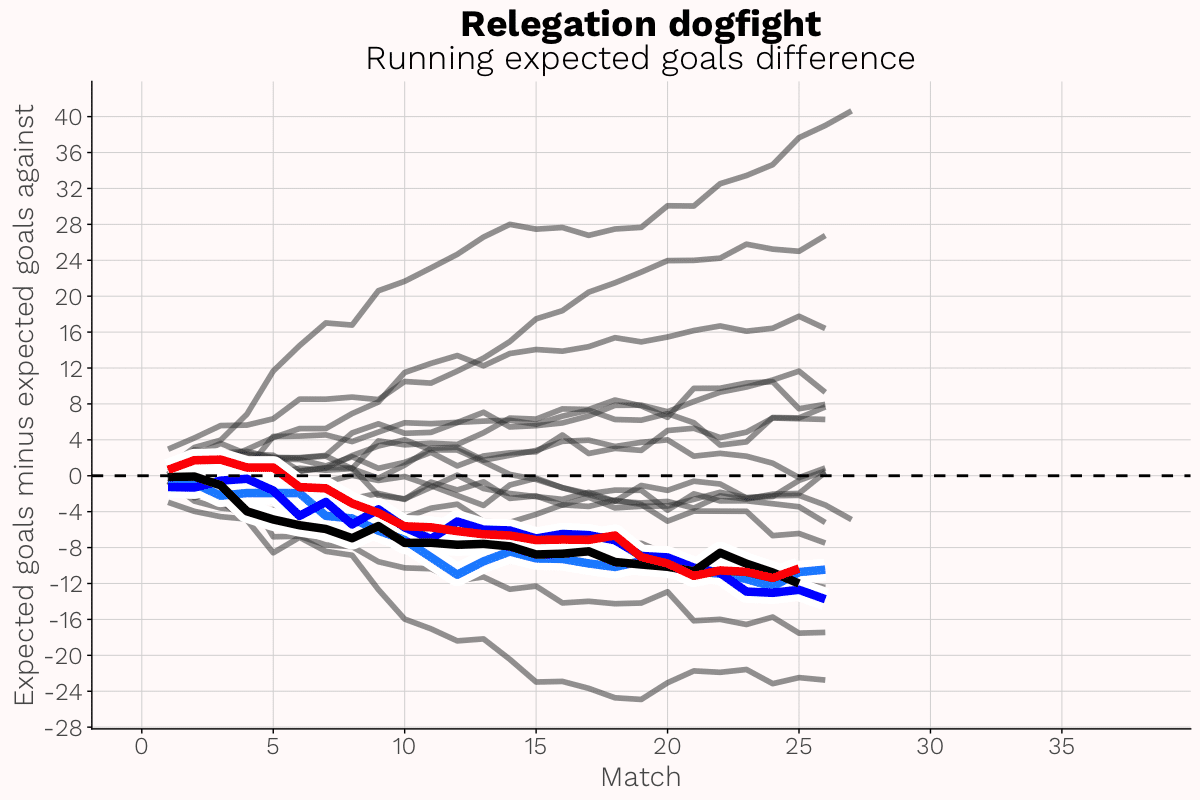 The two main things to draw from this are one, they’re all producing about the same performance level. And two, they’re all on roughly the same trajectory. It’s not like one of these sides is rocketing up (or bombing down).

Could the fixture schedule be the making or breaking of this battle?

Three of these teams have four games against the top six in their remaining twelve games; Newcastle only have two. And, you know, Rafael Benítez is also Too Good To Go Down…

And then there was one

Burnley are, have always been, and will likely always be strange. They defy human belief and computer statistics. But this season’s performance wasn’t just their luck running out. They were really bad.

The very bottom line on the expected goals differences graphs you’ve been seeing in this article has been Burnley, unsurprisingly. You might have noticed, though, that they’ve somewhat arrested their decline. 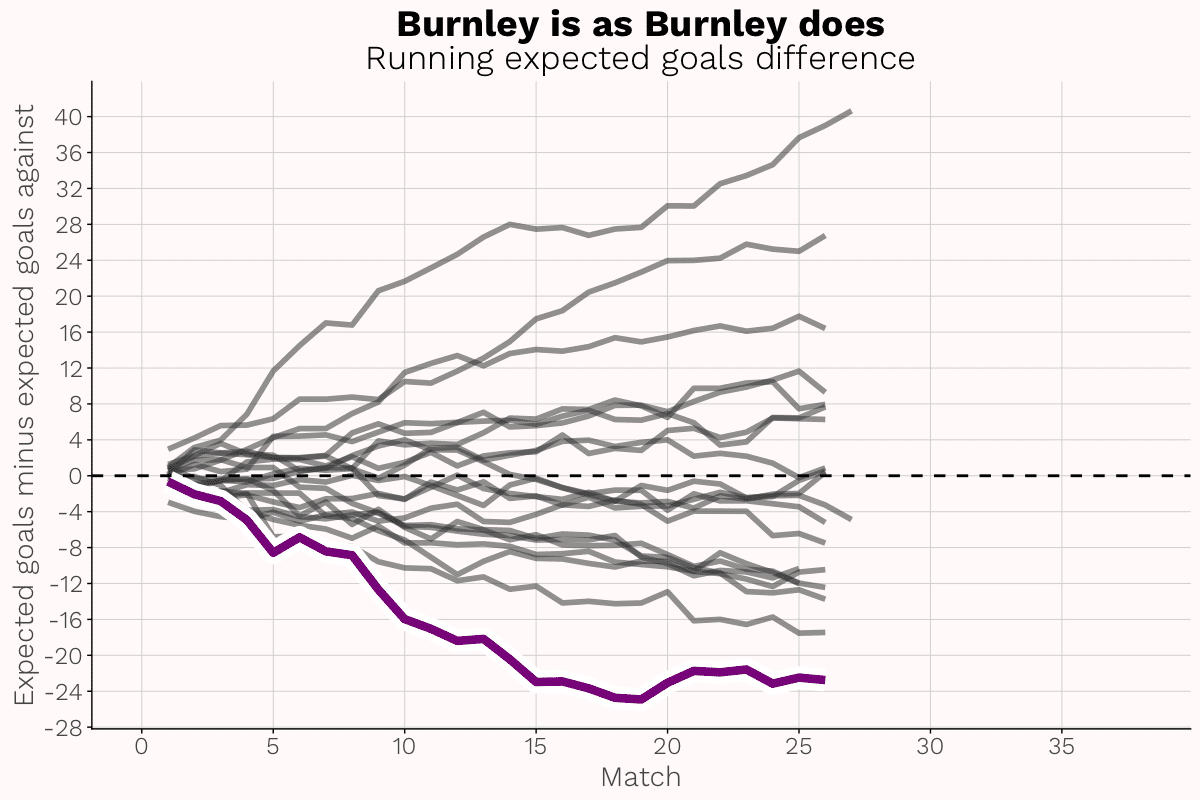 Tom Heaton looms over this change like a giant, distracting puppeteer. He may be responsible for some of the improvement, but not all of it.

Because of this — because there’s no obvious radical change for Burnley — it’s hard to know whether they’ll keep this form up. Do we assume yes, because of their performances last season; or no, because of how they fared in the first half of this one?

To be added into the mix is the fact that Sean Dyche’s side have the worst set of fixtures remaining — five against the top six, with three of them coming in the final four of the season. That’s tough.

If Burnley do keep their current form up then, with the tough schedule, it seems like a toss-up between them and the other ‘non-Palace’ four. If this last three months is little more than a mirage, then they could be in trouble.