After years of moderate success, it seems Udinese are in trouble.

As recently as 2011/12 they finished third in Serie A, following that up with a narrow Champions League playoff loss to Arsenal and a place in the Europa League last-16.

As they did so they uncovered a wealth of promising talent, giving Alexis Sanchez, Medhi Benatia, Juan Cuadrado and countless others their first taste of the spotlight.

Fast forward to today, however, and they sit just six points above the relegation zone after setting an unwanted club record of eight consecutive defeats, much to the chagrin of owner Giampaolo Pozzo.

“I’m very worried, our performances aren’t good enough for us to stay in Serie A, so we must intervene immediately,” he told Udinese TV. “There’s no longer any room for talk, we’re in a crisis and an emergency. We need to wake up, otherwise we’ll end up like the Titanic.”

Yet despite their obvious problems, the Friulian side continue to unearth talented players, with midfielder Jakub Jankto currently the most prominent example.

His performances amidst Udinese’s struggles have been spectacular, with some of Europe’s biggest clubs taking note.

Jankto’s agent Giuseppe Riso has told RMC Sport that Arsenal and AC Milan have already expressed their interest in signing the 22-year-old this summer, while Chelsea, Everton, Sevilla and Juventus are also thought to be interested.

Born in January 1996, Jankto started off his playing career with hometown club SK Slavia Prague, progressing through the youth ranks and making a good impression at all levels.

He was on the brink of a first-team debut in 2014 only to be sold to Udinese, who immediately dropped him into their Primavera (Under-19) side where he scored four goals in 27 appearances.

For the 2015/16 season he was sent on loan to Serie B side Ascoli, where he shone once again, weighing in with five goals and nine assists in 34 league games.

Recalled to Udine last term, he registered another five goals and four assists while being used out wide by Beppe Iachini. However, when he was sacked in October 2016 his successor had little time for Jankto the winger.

Gigi Delneri is often criticised for his cautious approach and outdated tactics, but the gruff coach was soon made to recognise his error in marginalising the youngster. He brought him back into the side in a very different role.

“With Delneri there was the possibility to play by taking advantage of the unavailability of some players – and I took my chances well,” Jankto told the Corriere dello Sport.

“This obviously gave me confidence and greater belief. After that, things began falling into place for me. He played me centrally. I had more time and space where I could show what I was capable of.”

Delneri agreed and, happily watched as his new charge blossomed and the went on to make his full international debut.

“It gives me a source of pride,” the Italian coach said. “To see him now playing for his country is proof of a job well done. As soon as I put him back in the team, he realised he had to change.

“He had to take more responsibility. At that moment, he knew he was no longer a kid. He was a proper footballer.”

Delneri has now gone, replaced by former Milan and Italy full-back Massimo Oddo, and Jankto’s displays have moved to an even higher level.

The changes on the touchline have seen him deployed in a variety of formations, but he has almost exclusively occupied a central role behind the striker, providing an outlet when Udinese win possession while looking to create chances for those ahead of him.

Standing slightly taller than 6ft, he is physically strong, uses his body well to shield the ball from his opponents, rarely is dispossessed and is blessed with excellent vision.

Jankto’s average of 1.7 key passes per 90 minutes might not seem very high, but in the context of the team’s struggles – Udinese average just 46 per cent possession this term – his production has been superb.

That figure is a team high and while his 36 passes per 90 minutes is hardly sensational, over a third have been played forward and almost half have come in the final third of the pitch.

Excellent at set pieces, both in terms of direct shots or crosses from corners and free kicks, he has hit the target with 22.91 per cent of his shots this term, registering five goals and four assists in all competitions.

There are two main areas in which Jankto needs to improve if he is to thrive in the kind of environment he seems certain to find himself before too long, with both his passing and defensive effort requiring serious work.

He averages just 27 accurate passes per 90 minutes and has connected with just 76 per cent of his attempts during the 2017/18 campaign, the latter figure the biggest cause for concern.

Any of the bigger clubs he has been linked with are used to dominating possession, misplacing a quarter of his passes is simply not good enough.

The same can be said for his work without the ball, Jankto averages just one tackle and 0.7 interceptions per outing.

Fouling more often than he is fouled is a poor return and a more diligent approach to his timing, pressing and chasing will be a prerequisite if the Czech international hopes to thrive on a bigger stage. 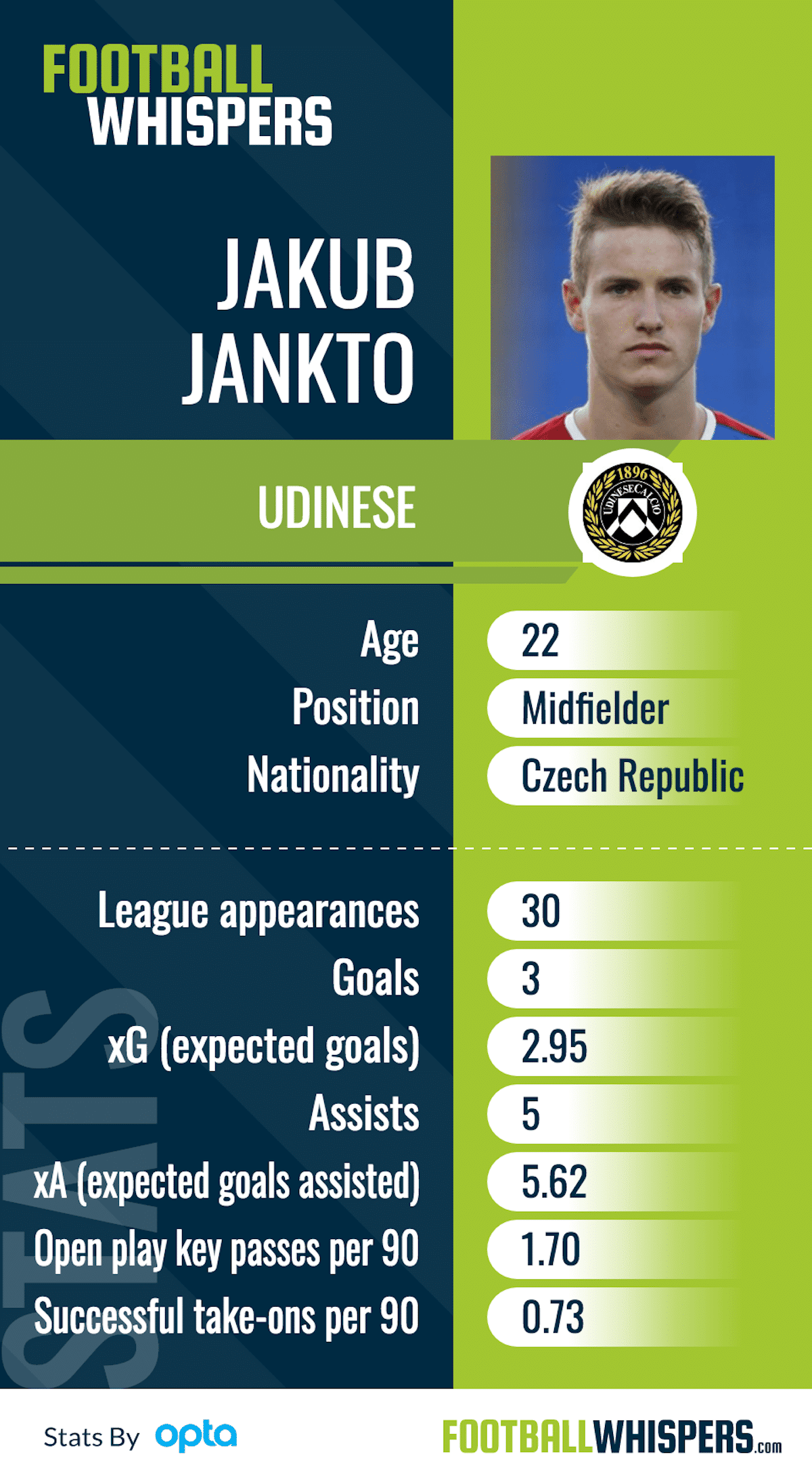 His current side survive on the profits made from selling such players and, having joined Udinese from SK Slavia Prague for a reported fee of €700,000 back in 2014, it would not be a surprise to see them cash in when the summer transfer window opens.

Jankto is expected to cost around €22million according to La Gazzetta dello Sport, while none of the clubs linked to him will have a problem improving his annual salary.

He is believed to earn just €400,000 net per year on a contract that runs until 2019, and even if Udinese being relegated is unlikely, they will almost certainly still be looking to cash in at the end of the current campaign.

Milan were knocked back in January, with sporting director Massimiliano Mirabelli told to wait as he looked to jump the queue ahead of the other suitors. The Rossoneri official knows he will not be alone in trying to tempt Jankto away from the Dacia Arena next time around.

Why he should be signed

Possessing all the tools to be successful in a bigger side, he has no shortage of admirers, including compatriot Pavel Nedved.

“Jankto is doing great at Udinese,” the Juventus vice president and former Ballon d’Or winner said recently. “Of course, there is not the pressure of a big club there, but my love for the Czech players is understandable.

“A Czech player at Juve is always possible. I'm not suggesting anything but it's clear he can play in Serie A at a higher level, he's fast, direct and hungry for victory.”

That is almost certainly true, but his agent is keeping all his options open. “Jakob loves English football, he still has time to change but currently he is only focussing on Udinese,” Giuseppe Riso told CalcioMercato.com after scouts from Arsenal watched the midfielder back in December.

“Over time we will see but it is true that the Premier League is the greatest attraction for him.”

He might well be, but there is plenty of attention focussed on Jankto. He is a player likely to be in many a headline in the coming months.