Serie A is a league famed for its defenders. Kalidou Koulibaly, Alessio Romagnoli, Leonardo Bonucci and Giorgio Chiellini all boss the defensive third nowadays and in the past, it was a league dominated by Paolo Maldini, Alessandro Nesta, Franco Baresi and Alessandro Costacurta.

Star names playing for big clubs. However, this season, one of the defensive standouts has been Torino’s Armando Izzo.

Likened to Fabio Cannavaro due to the fact he’s able to impose himself on the opposition despite his small height (6ft) for a centre-back, the 27-year-old has been key to the Turin-based clubs push for European football.

With just two games left to play, Walter Mazzarri’s men find themselves in seventh position, just three points off of Inter who currently occupy fourth spot. Their defence has been key to their form this season with only Juventus (27) and Inter (28) conceding fewer goals than Torino (32).

No player has started more matches than Izzo (35) during this campaign as the 2018 summer signing has gone about proving his worth to Mazzarri.

He moved from Genoa for a fee believed to be in the region of €8million. If Torino cashed in on him at the end of the season they could treble that. And they could well look to cash in with Roma, Manchester United and Arsenal taking a keen interest in him.

With top class defenders at a premium these days, finding one performing as well as Izzo is for as little as €25million could turn out to be one of the bargains of the summer. 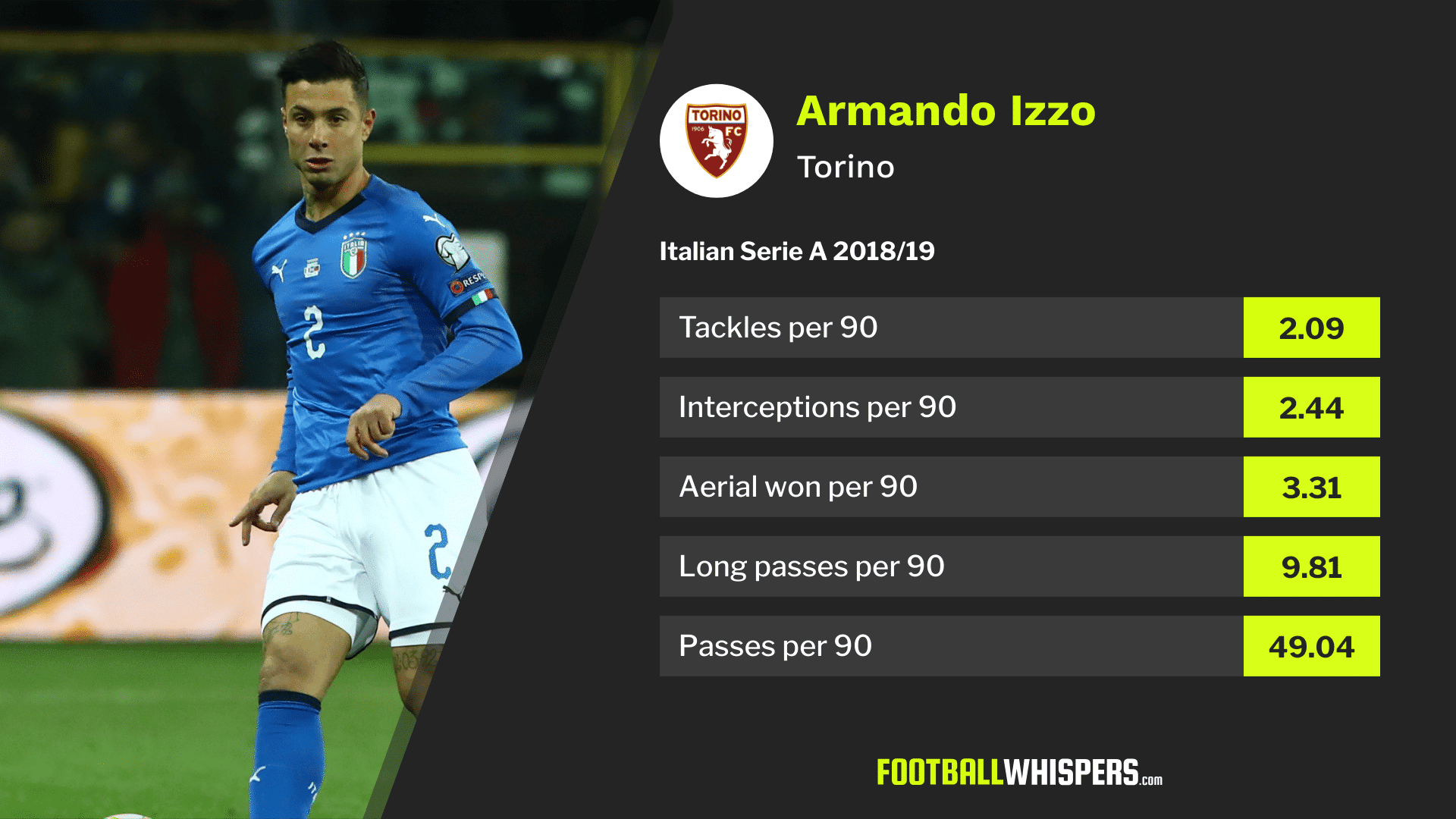 His performances in the second half of the 2017/18 season for Genoa convinced Torino to sign him. His form improved in Turin and he was rewarded with his first cap for Italy.

While others may have let the suspension ruin their career, Izzo used it as a reason to improve.

This term, on average, he's won 3.3 aerial duels on a per 90-minute basis, ranking him fifth in Serie A for that particular metric when looking at defenders.

He's ranked third for defensive duels won (7.14) and fourth for Interceptions attempted (2.43). Playing as part of Mazzarri’s back three, Izzo is comfortable at centre-back or on the right. He covers well and his positioning quells a number of attacks, highlighted by the fact he's one of the defenders in Serie A with the most interceptions this term.

He's an aggressive centre-back, one who likes to step out into midfield to squeeze the opposition when possible. It's a necessary trait in the modern game but it doesn't mean all defenders are comfortable doing it. He wins possession back 3.1 times in the middle third on a per 90 minute basis, the fourth highest in the Italian top flight.

Izzo is also aggressive when in possession. Of the 49 passes he attempts on average per 90, 45 per cent of them go forward. For context, Phil Jones attempts 59 passes and just 23 per cent of them are forward. Likewise, Shkodran Mustafi averages more passes (61) but he plays fewer forward than Izzo does (35 per cent).

With the going rate for a defender now north of €65million, getting in one who can impact the first-team for the foreseeable future for close to €25million is a shrewd move. While Izzo isn't a long-term option a team should build around, there's no reason he could be playing at a high level for the next five years.

He'll never be a star name, but he could be a consistent performer. A rare trait for a defender these days.