Santa Claus has his naughty and nice list and, here at Football Whispers, we have decided to come up with our own.

Now that we're just days away from 2019 – a terrifying thought – it's the perfect time to analyse just who has had a 2018 to remember and who has had a year to forget.

Right, let's get on with the lists.

Let's just get him out of the way.

It's usually a lean Christmas if someone loses their job but the lump of coal in Mourinho's stocking will amount to a cool £24million if some reports are to be believed.

But he can count his millions knowing that his time at Manchester United was a crushing failure.

True, there are question marks over Ed Woodward's leadership while a number of star players certainly didn't cover themselves in glory, but Mourinho's negative tactics led to United being dumped out of the Champions League by Sevilla and being spanked by Liverpool at Anfield, a game which proved to be the withering denouement to José's reign.

When will he back? Who knows. One suspects we may never again see him in the Premier League.

While Liverpool fans will despair that they can no longer sing about the beleaguered Portuguese coach, it's safe to assume Paul Pogba and Mourinho won't be exchanging Christmas cards this year.

On the face of it, the Colombian midfielder's inclusion may seem strange. To those who watch Bournemouth regularly, however, it's anything but.

Signed from Levante in the summer for £25million following an impressive showing for Los Cafeteros at the World Cup, Lerma seems to be on a man hellbent on breaking everything in his path.

The 24-year-old has seven yellow cards in 13 games, so more than one every two appearances and well on his way to smashing the record for most in a Premier League season: 14.

Is it out of character for Lerma? Not at all. Last season, he managed 16 bookings in 25 games for Levante, which is a bit special.

He also scored perhaps the greatest own goal in Premier League history in November when he spectacularly turned Sead Kolašinac's cross into his own net to gift Arsenal the lead.

How can you not love this man?

It's been 12 months to forget for Sparky, becoming the first manager in Premier League history to be sacked twice in the same year.

2018 started with his dismissal after four and a half years at the Stoke City helm. It was an ignominious departure, too, with League Two Coventry City hammering the final nail into his coffin after knocking the Potters out of the FA Cup.

It wasn't all bad, of course. Hughes replaced Mauricio Pellegrino at Southampton in March and kept them up.

But his dreadful start to the current campaign spelt the end of his brief tenure at St Mary's and, like Mourinho, we'll be very surprised if he pops up in the Premier League again.

Like Lerma, Murray is one of those players you can easily imagine going in two-footed on a shoplifter trying to hightail it down the street.

The Brighton striker could have easily ended up on the Nice List after his impressive exploits in front of goal – with 15 in 2018, only Mohamed Salah, Harry Kane, Pierre-Emerick Aubameyang, Sergio Agüero and Jamie Vardy have more. 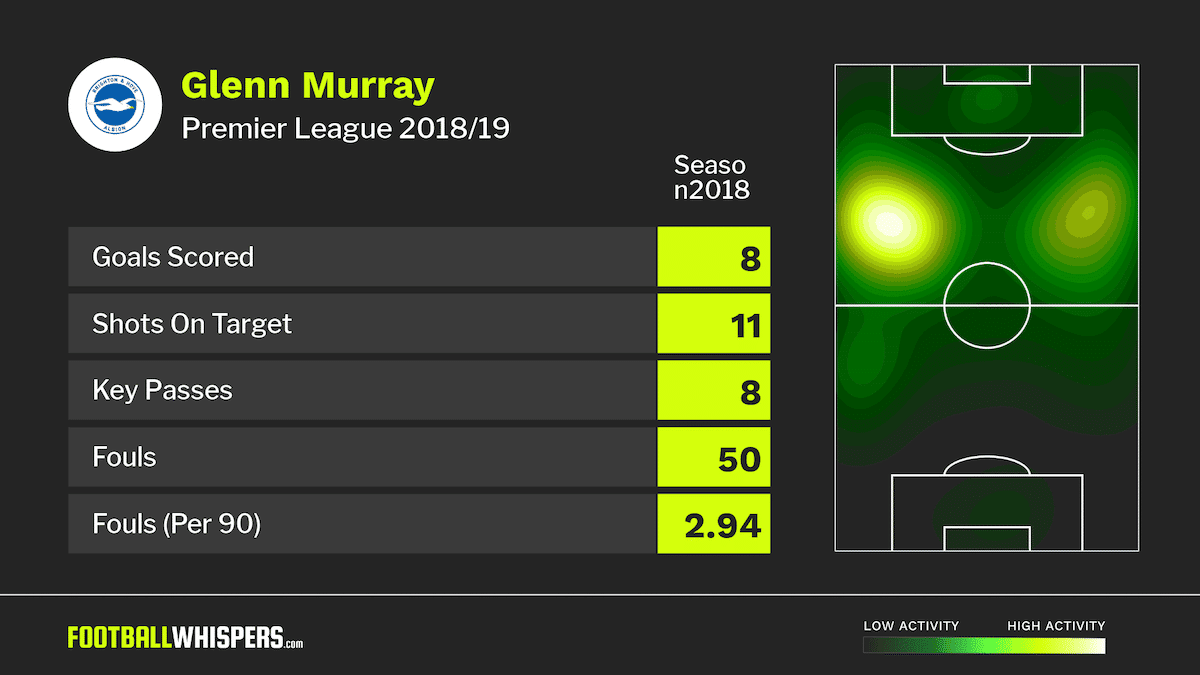 But the 35-year-old loves a good old-fashioned foul.

In any given game you can find Murray clattering into a full-back as he tries to hoof it down the line, backing into his man as they watch the ball drop out of the sky or just generally having a cheeky little kick out when he knows he's beaten.

Murray committed 60 fouls last season. That wasn't quite enough to surpass Luka Milivojević (69) but this season the Serb's predecessor in the Crystal Palace House of Pain is this season's King of the Fouls.

Having starred for Liverpool during the first half of the 2017/18 campaign, the Brazilian decided that he didn't want to stick around at Anfield until the end of the season, packed his bags and left for the Camp Nou.

Although Coutinho always seemed destined for a move to Barcelona, that it happened halfway through the season, 12 months on from signing a new long-term deal at Liverpool, cheesed fans off.

Ultimately, it barely affected Jürgen Klopp's side as they reached the Champions League final.

Now, with Coutinho a distant memory, the club are dreaming of their first Premier League title. Despite his penchant for spectacular goals, the playmaker is not missed by the Kop faithful.

One of the men who made post-Coutinho life much smoother, van Dijk has been outstanding for Liverpool since joining from Southampton in a world record £75million deal on New Year's Day.

The Dutchman scored the winning goal on his debut to knock Merseyside rivals Everton out of the FA Cup, was named in the Champions League Squad of the Season after proving crucial in Liverpool's run to Kiev and has been credited with transforming the club's defensive fortunes.

With Alisson behind him and Joe Gomez beside him, the 27-year-old has blossomed into the commanding leader Liverpool's defence has lacked in recent years.

He clinched the PFA Fans' Player of the Month award for November and was named Netherlands captain in March. What a year.

To put it simply, Sterling has been remarkable for Manchester City in 2018.

He's scored 14 goals and notched 13 assists since in the league January 1, a telling indicator of the consistency he has integrated into his game under Pep Guardiola.

Sterling was a key figure in City's canter to the title last season and now has his sights set on Champions League glory. He's been around so long – having made his Liverpool debut way back in March 2012 – that it's easy to forget he's just turned 24.

The best is yet to come.

Off the field, Sterling has been commendable, too, rightly hailed as a leader in football's fight against discrimination when he adopted a strong stance against sections of the media which “fuel racism” after suffering alleged racist abuse from Chelsea fans during City's 2-0 defeat at Stamford Bridge.

An admirable figure, both on and off the pitch.

While the Spaniard has much to do before he can stand alongside Arsène Wenger in the pantheon of great managers, Emery has breathed new life into Arsenal after replacing the Frenchman in the summer.

Their 22-game unbeaten run came to an end with defeat at Southampton earlier this month but Emery has undoubtedly revitalised the club, injecting a fresh perspective and re-establishing them as top four contenders.

Lucas Torreira has been an excellent signing, Aubameyang and Lacazette are in fine fettle and Emery has proven that he is unfazed by the bigger decisions, illustrated by Mesut Özil's removal from the starting line-up.

Arsenal fans are optimistic about Emery's future. If the exhilarating 4-2 derby win over Tottenham is anything to go by, they're in for quite a ride.

There is a very good reason the Argentine is viewed by many as the ideal permanent successor to Mourinho at United: he's brilliant.

Pochettino has rightly garnered a reputation as one of the most astute and versatile tacticians in the modern game over the last four and a half years at Tottenham, but 2018 has perhaps more than any other enhanced his reputation.

Having secured Champions League football with a third-place finish in May, Pochettino has masterfully navigated his way through a testing climate at Spurs over the last few months.

With the spectre of the club's much-delayed stadium hanging over him, Poch has continued to deliver results. 13 wins from 17 in the league this season has kept Liverpool and Manchester City in Tottenham's sights and qualifying for the Champions League last-16 having picked up just one point from three games has to go down as one of his finest achievements.

It's important to remember, too, that Pochettino was the only manager who didn't get any new players in the summer. Despite that, he's still outperforming Chelsea, Arsenal and United.

Their form may have tailed off a bit following a fast start but it would have been remiss of us to exclude someone from Bournemouth.

Eddie Howe continues to reinforce the idea that he is the most exciting young English manager in the game while Ryan Fraser's excellent form has certainly not passed us by.

But we've been warmed by Wilson's rise to prominence. The 26-year-old, who has twice ruptured his anterior cruciate ligament, has made up for lost time with eight goals and five assists in 16 appearances this term.

He's had success at international level, too, scoring on his England debut in the friendly win over the United States. Chelsea assistant manager Gianfranco Zola recently revealed that Wilson is a transfer target for the club.

That he is now being linked with a club of the Blues' stature six years after playing non-league football with Tamworth is a measure of how far Wilson has come.