Arriving in the Premier League with a hefty price tag instantly puts a player under the microscope. Every pass is analysed, every shot discussed and every action dissected.

It was going to be no different for Tanguy Ndombele.

The midfielder made the switch to Tottenham Hotspur from Lyon this summer for a club-record fee. With the other reinforcements signed by Mauricio Pochettino not in the squad for the opening match against Aston Villa, all eyes were on the France international.

The £55million man made his debut in a team without Heung-min Son, Dele Alli or Christian Eriksen.

Pochettino opted for a diamond shape with Lucas Moura and Harry Kane leading the line. Erik Lamela was stationed behind the duo with Moussa Sissoko and Ndombele either side of Harry Winks.

Spurs found themselves behind inside ten minutes. A long Tyrone Mings pass was picked up by John McGinn, the Scotland international raced into the penalty area, sat down Danny Rose down and fired a confident, left-footed effort past Hugo Lloris to stun the home crowd.

Spurs huffed and they puffed but they couldn’t find a way past a stern Villa backline and an inspired Tom Heaton. Their best chance of the first half arrived just one minute before the break.

Ndombele was the creator. 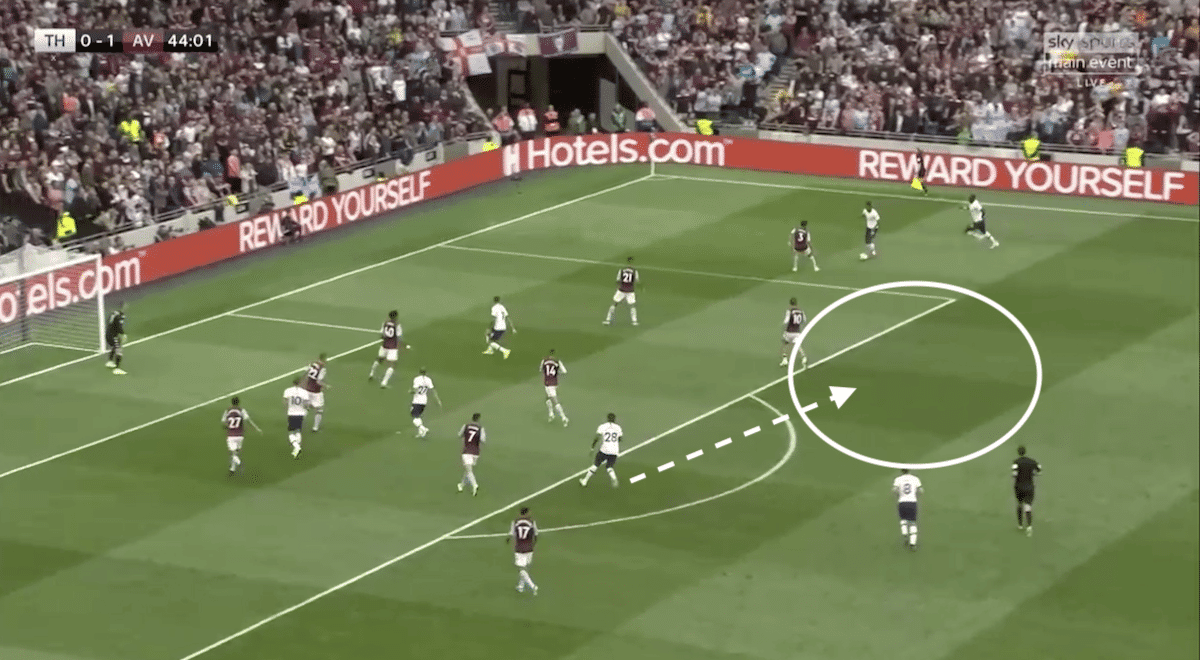 The still above shows the scene just before Kane has a headed effort tipped over by Heaton.

Spurs have an overlap on the right and Villa have concentrated their efforts on stopping that ball into the area. Ndombele could linger on the edge of the box but instead sees the space behind Jack Grealish and offers himself as a passing option.

It's nothing extraordinary but does show his intelligence. It's even more encouraging for Spurs fans as the midfielder isn't usually someone who finds himself this far up the pitch.

The fact he's so natural around the penalty area is a positive. 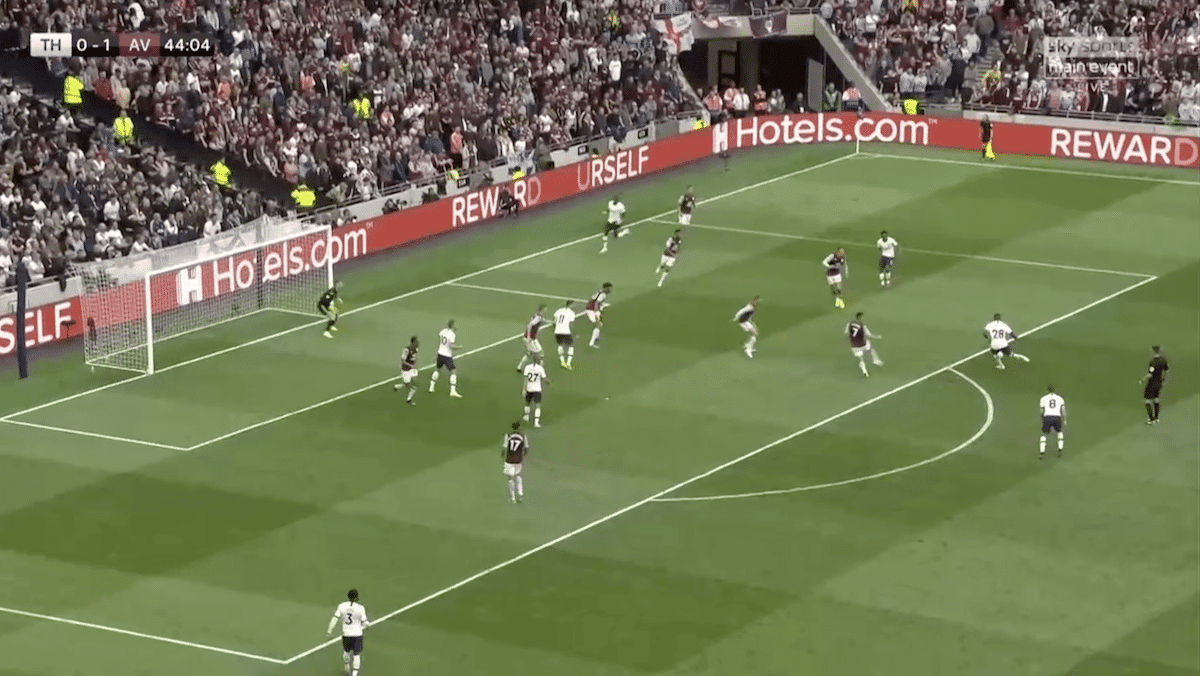 McGinn, the player initially keeping tabs on Ndombele, is slow to react and can't get to the Frenchman. The Tottenham No.28 then showed guile to delicately arc the ball over the Villa players and straight onto Kane's head.

Painted by many as a midfield destroyer, that one moment of genius in the first half demonstrated Ndombele is more than that.

However, he did show his defensive worth. Especially in the opening 45 minutes when he helped Winks get a grip in the middle third. 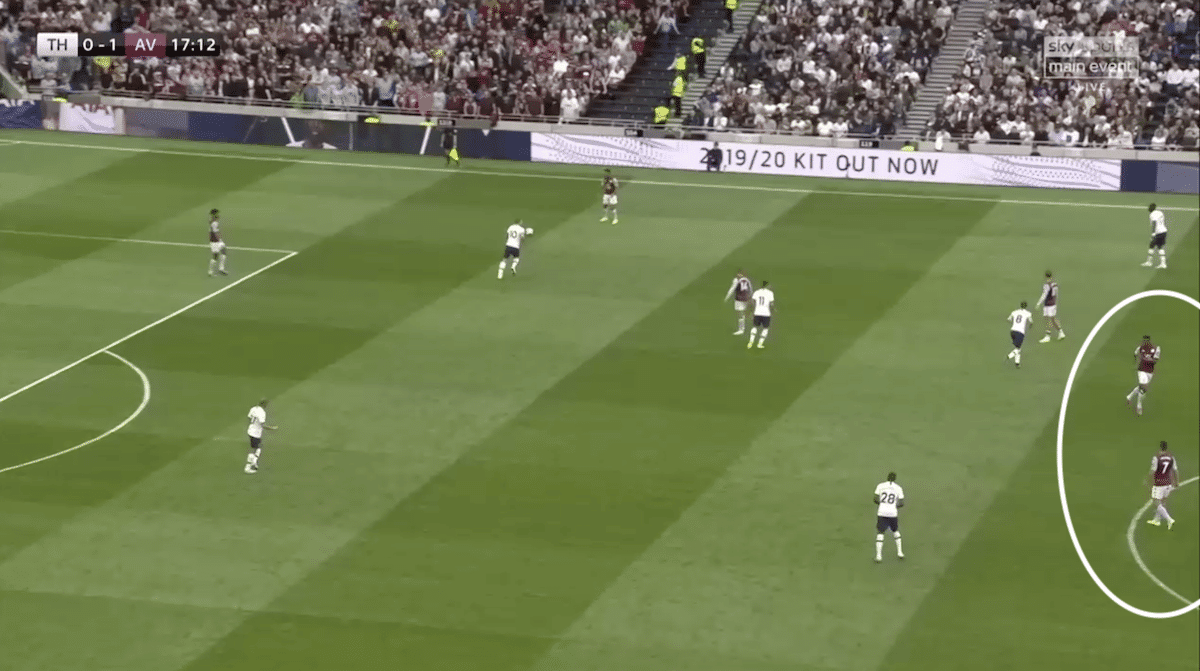 Villa often tempted Spurs into pressing their back four. The midfielders would then ready themselves for a pressing trigger, which would, in turn, leave the Tottenham centre-backs two vs. two against Wesley and McGinn. It worked for the visitors' opener and it was a clear tactic Dean Smith wanted his side to exploit.

In the above image, it's clear Winks has had to vacate his central area to get close to Grealish. This then leaves the two Villa men, circled in white, free behind the midfield and ahead of the defence.

Ndombele notices and reacts as soon as the ball is played. 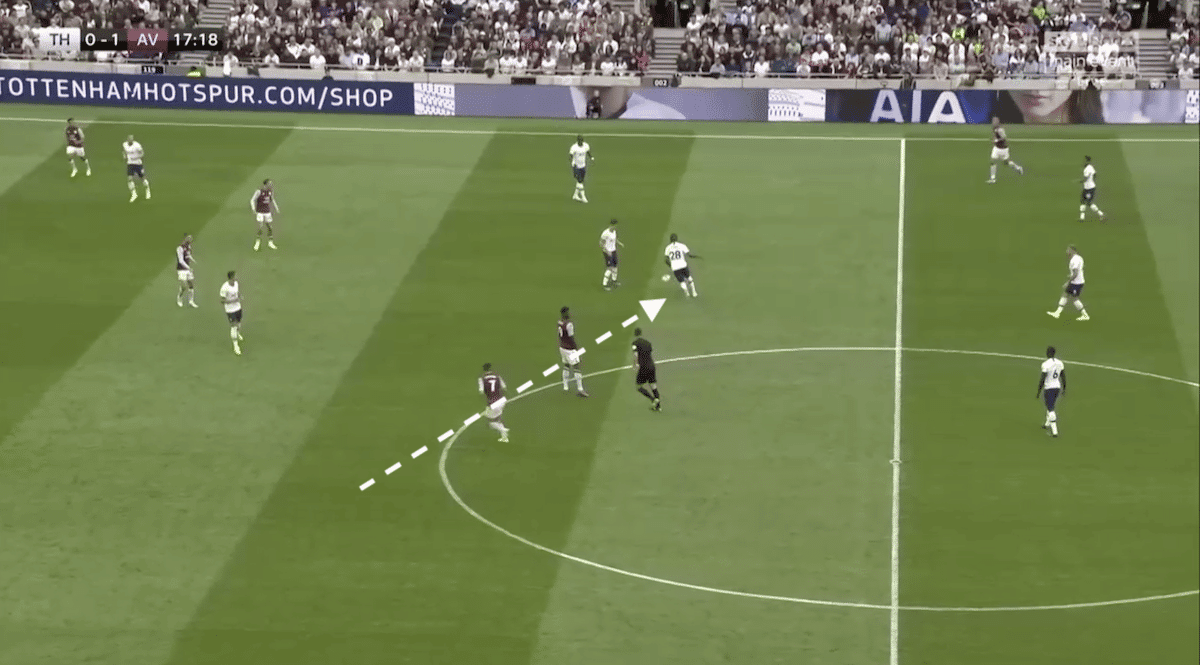 He makes up the ground to dispossess Wesley and in one swift dart he's quelled the Villa attack and Spurs are back on the ball with a chance to keep the away side hemmed in.

In the second period, Pochettino switched things around and reverted back to a 4-2-3-1 shape. It's the system used by Lyon when Ndombele burst onto the scene and one he's clearly comfortable in. At first, he partnered Winks in the two before Sissoko dropped back when Eriksen came on to replace the Tottenham No.8.

It was after the change to 4-2-3-1 that Ndombele found the equaliser. It took a precise curled effort from the edge of the area to beat Heaton and with the best part of 20 minutes remaining, Spurs had the chance to go on and win the game.

They did exactly that with two late goals from Kane. And while the England international was the talk of the media, along with Eriksen who seemed to spark the Spurs attack into life, it was Ndombele who deserved the plaudits for a memorable debut playing in an unfamiliar role. 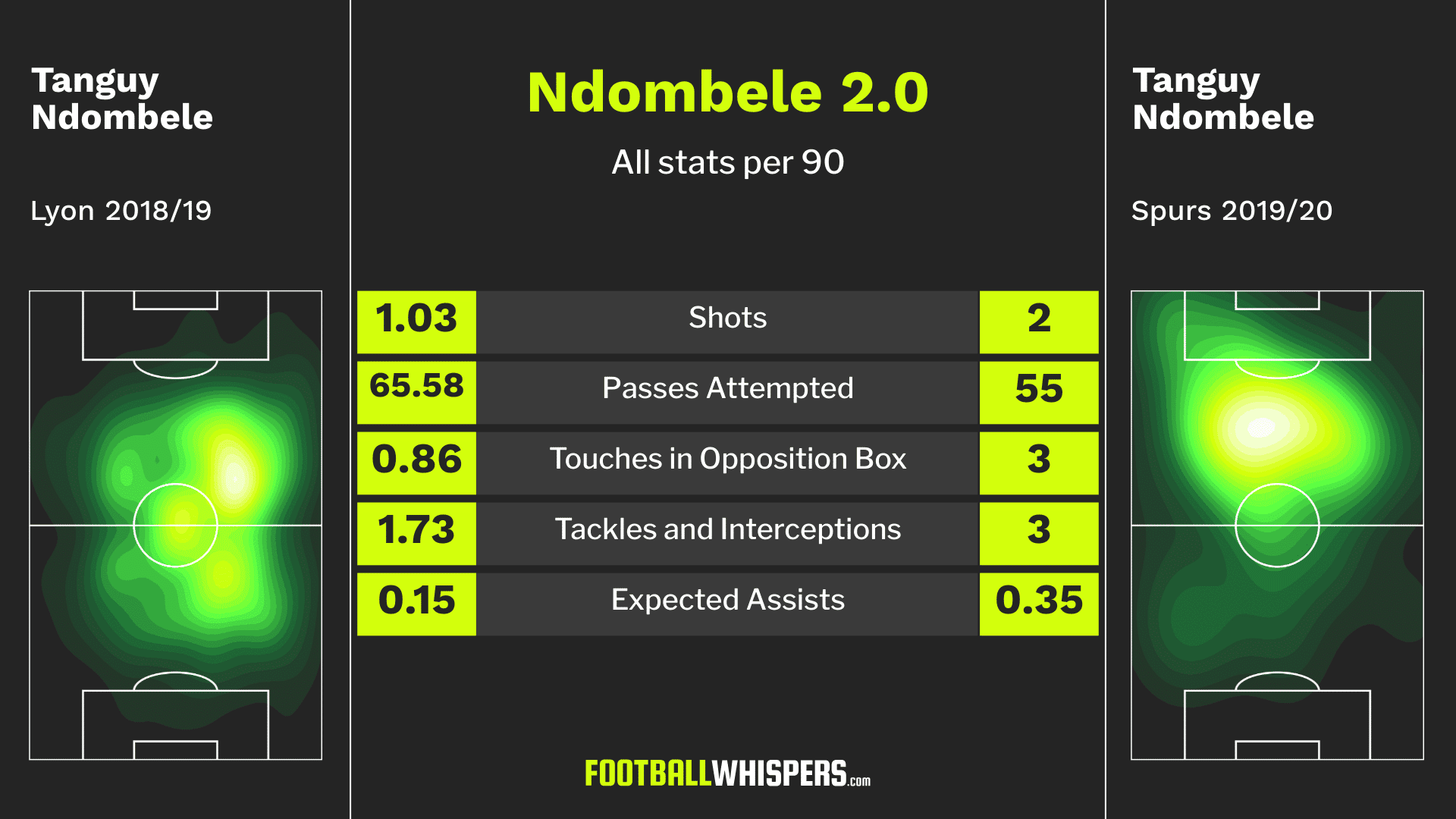 For Lyon, the 22-year-old would sit in the middle third, break up play and find Houssem Aouar. For Spurs, however, he was much more advanced and he was having a real impact in the final third. A marked difference.

His two shots represented close to a 100 per cent increase on what he averaged for Lyon in Ligue 1 last term. He touched the ball in the box on three occasions while in France he rarely surpassed one. He was busy off the ball for Spurs, making a combined three tackles and interceptions, way up on his 1.73 average last season.

If Ndombele can seamlessly adapt to this new, advanced role then Spurs might have a better player than originally thought.

He didn't look out of place against Villa. The big test is on Saturday against Premier League champions Manchester City.