Now that the 2018/19 season is in the books, the Premier League's loan army are set to return to their parent clubs.

Loan spells can be tricky but, when they work out, they can greatly enhance a player's reputation.

Last season was no different, as a clutch of loaned Premier League players impressed for either clubs further down the English football pyramid or in other leagues.

Here, we look at seven who are primed for more significant roles at their parent clubs following successful temporary stints elsewhere.

After a hugely disappointing first season at Stamford Bridge, the French midfielder spent the 2018/19 campaign at AC Milan.

The 24-year-old, who shot to prominence as part of Leonardo Jardim's much-admired Monaco side in 2016/17, certainly saw plenty of minutes at the San Siro, starting 26 of their 38 Serie A games. 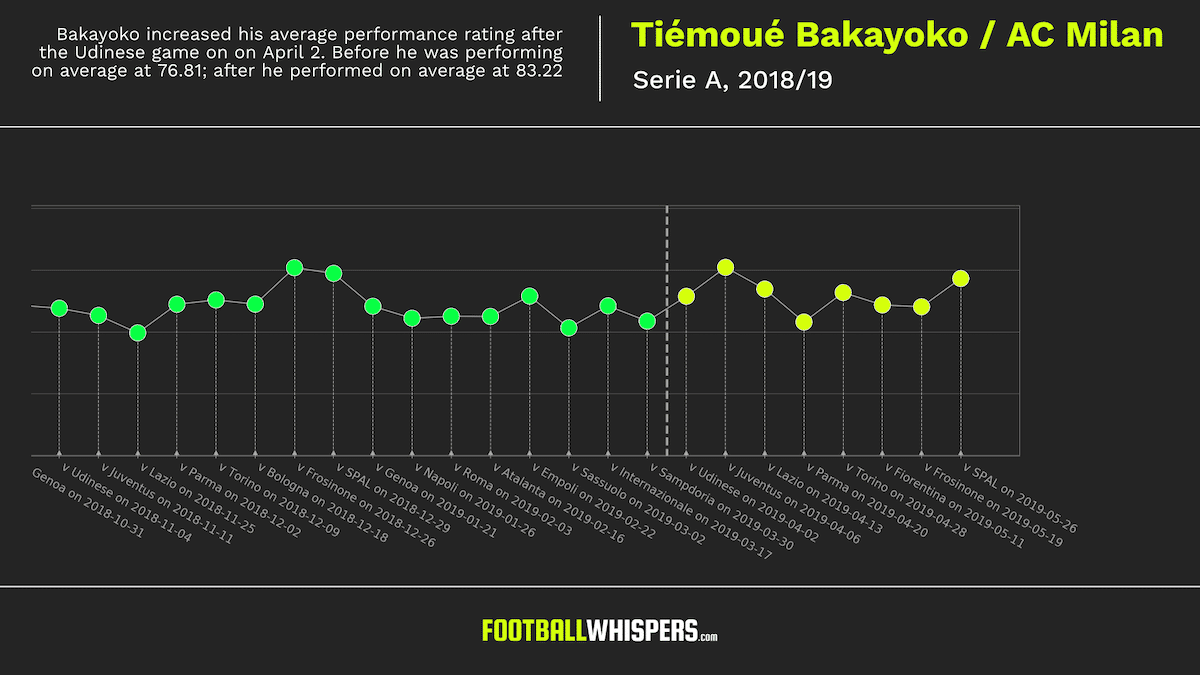 After a slow start, Bakayoko found some of his best form in November, impressing against the likes of Juventus and Lazio, before a rash red card in the scoreless draw at Bologna stalled his momentum.

An outstanding display to help the Rossoneri defeat Napoli in the Coppa Italia earned praise from head coach Gennaro Gattuso, who highlighted the Frenchman's ability in helping the transition from defence to attack.

Despite his fallout with Gattuso at the beginning of May, Bakayoko can be tentatively positive about his year at Milan. There may well be a place for him at Chelsea, too. A more robust midfield presence than Ross Barkley or Mateo Kovačić, Bakayoko can expect to contend for a first-team spot in 2019/20.

It may have been a thoroughly depressing end to the season at United, but a couple of their loanees revelled in success.

Tuanzebe has only managed eight senior appearances for the Red Devils but showed plenty of promise at Villa Park, establishing himself as a regular in Dean Smith's XI at centre-back.

With United fans keen to see alternatives to Phil Jones and Chris Smalling at the heart of Ole Gunnar Solskjær's backline, the 21-year-old may be given the opportunity to shine during pre-season and stake his claim to partner Victor Lindelöf.

And the man who partnered Tuanzebe for Villa is also hoping for a more prominent role at his parent employers.

After making just seven appearances for Bournemouth during the first half of the season, Mings joined Villa in search of regular first-team opportunities.

That's exactly what he got, too, starting 18 games from the start of February to immediately establish himself as a fan-favourite.

In the Championship, he ranked second in possessions won in the defensive third per 90 with 4.92. A progressively-minded centre-half, 44 per cent of his passes were forward.

Eddie Howe likes his defenders to be adept on the ball. With that, there's no reason why Mings can't cement his place at the Cherries provided Villa don't snap him up on a permanent basis.

The recruitment team at Arsenal clearly have a great deal of affection for the Bundesliga.

In the last few years, they've brought Granit Xhaka, Pierre-Emerick Aubameyang and Sead Kolašinac to the club after their spells in Germany and have sent Reiss Nelson and Emile Smith Rowe, two of the Gunners' brightest prospects, in the opposite direction to gain valuable experience.

And while injury has reduced Smith Rowe's involvement at RB Leipzig to just 28 minutes across three Bundesliga appearances, Nelson's time at Hoffenheim has been much more productive. 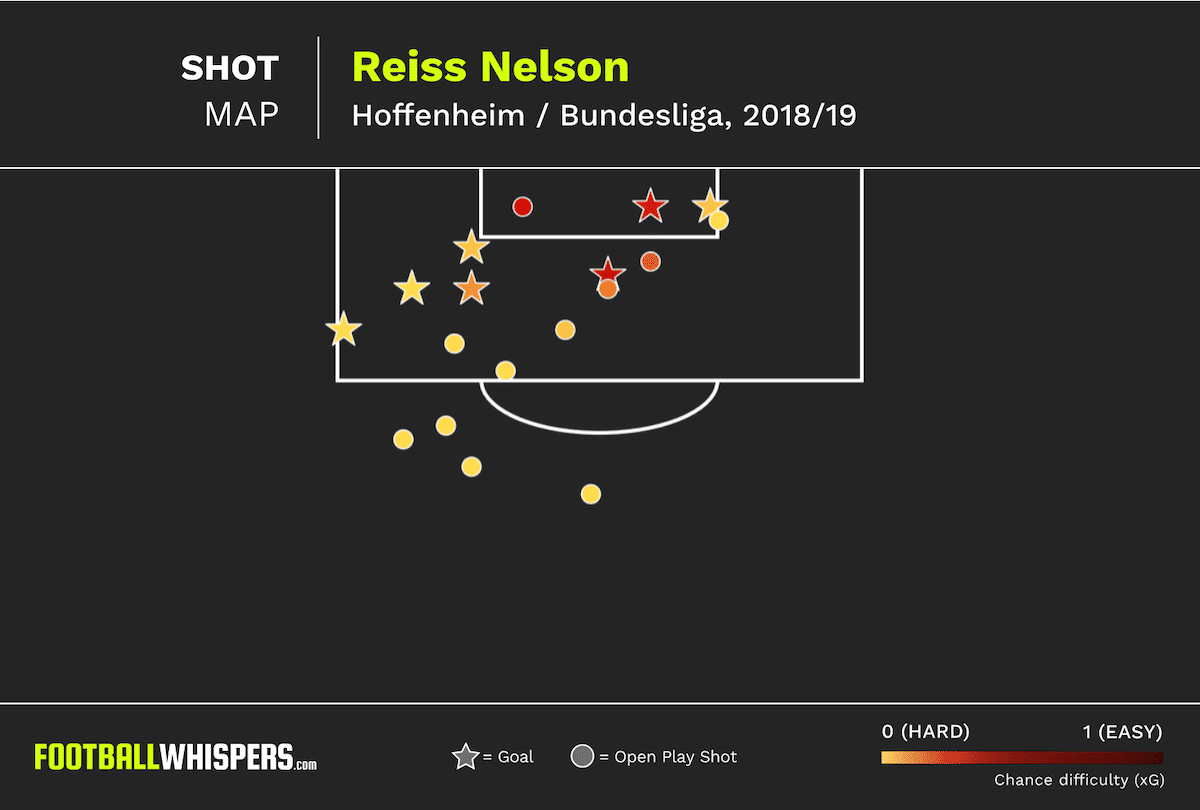 The 19-year-old didn't manage to nail down a starting place under Julian Nagelsmann, but still made a considerable impact, scoring seven times in just 643 Bundesliga minutes to earn a Rookie of the Year nomination.

While he hasn't lit up Germany quite like his close friend and Borussia Dortmund ace Jadon Sancho, Nelson exhibited more than enough natural ability to force his way into Unai Emery's thinking.

An exciting, touchline-hugging winger with pace and skill in abundance, although raw, Nelson should be given a chance at the Emirates. Being dropped for disciplinary reasons in March suggests he has much to learn, but supporters would much rather he continue his education under Emery. With another Europa League campaign on the horizon, there will be ample opportunities.

Chelsea's loanees have left an indelible mark on the Championship recently. Mason Mount showed flashes of quality under Frank Lampard at Derby County while Tammy Abraham's 25 goals for Villa are the chief reason we won't see the Blues legend managing in the top flight next term.

But Chelsea fans are just as excited about Reece James, the bulldozer of a full-back who flourished at Wigan Athletic and who must not be confused with former Wigan defender Reece James, who's now at Sunderland.

The 19-year-old, who can be seen making a fool of about half of Portugal U20s below, started all but one of the Latics' 46 games last season, contributing three goals and three assists.

Judging by that clip, his year at the DW Stadium has filled him with confidence, suggesting that England's embarrassment of riches at right-back (Trent Alexander-Arnold, Aaron Wan-Bissaka) is set to get even more, well, embarrassing.

A composed full-back – who is also capable of operating in central midfield or central defence – James created more big chances than any other defender last season with 12. He also completed more crosses (74), notched more shot assists from set pieces (30), ranked sixth in dribbles completed (47) and sixth in shots on target (15) among defenders. 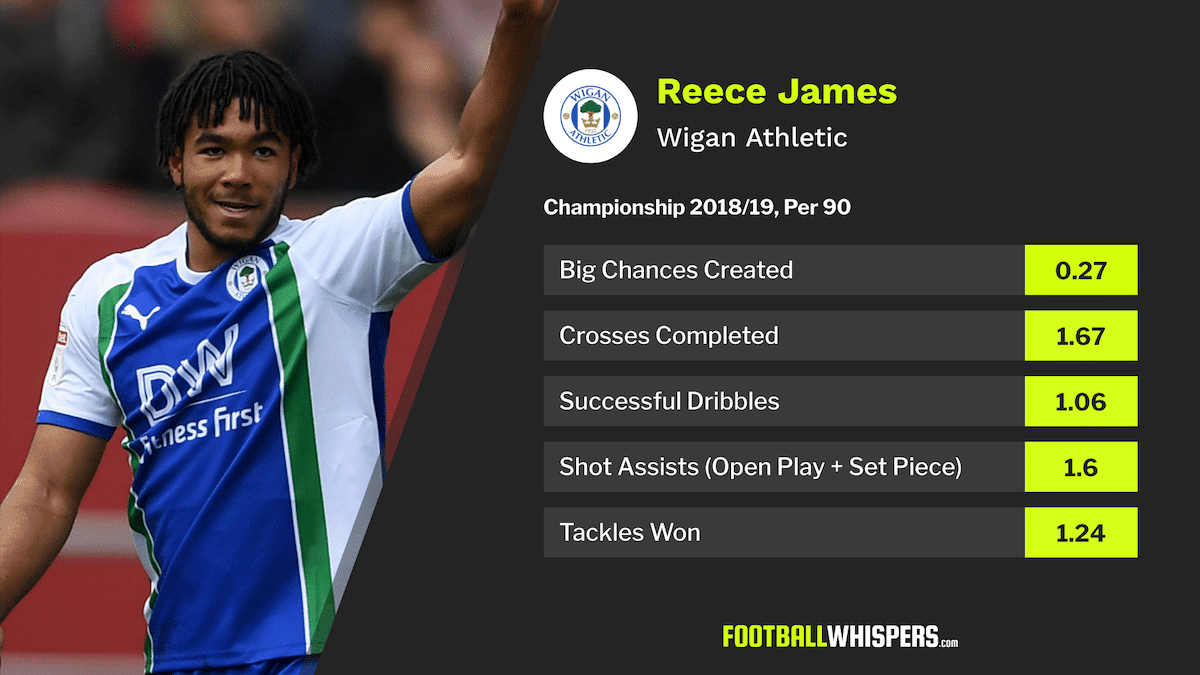 Yes, this kid has a big future, and César Azpilicueta can't be Chelsea's Mr. Consistency forever.

Reece Watch: Another Reece (Oxford) is set to return to West Ham United after a spell with Augsburg. The 20-year-old also had two previous stints at Borussia Monchengladbach.

Richarlison, Calvert-Lewin, Lookman, Davies. Marco Silva has a strong core of young players around which he can shape Everton in his image.

The forgotten man is Nikola Vlašić, who's made the most of his stint at CSKA Moscow after failing to make an impression at Goodison Park during the 2017/18 campaign.

Still only 21, the attacking midfielder scored eight goals and registered as many assists for the Russians, including a Champions League winner against Real Madrid.

Nikola Vlasic seems to be banging them in since he left Evertonpic.twitter.com/6NnQfa6Gat

With reported interest from Turkey, it's possible the five-time Croatia international views his future elsewhere. But if Everton can convince him to stay, Silva could certainly profit from his productivity in the final third.

Although the totemic Croatian has expressed interest in staying at Celtic, it's possible he is attracted by the prospect of reuniting with Brendan Rodgers, under whom he initially shone at Parkhead.

The 21-year-old may not have featured as prominently under Neil Lennon after returning from his ankle injury in March, but his early-season form suggested a player who could become a Premier League regular in the future.

Benković is a simple, steady presence at centre-back, a player who understands the importance of tempo and progression on the ball.

His 6ft 4in frame allows him to dominate aerial duels while he reads the game superbly. Wes Morgan is now 35 and, with uncertainty over Harry Maguire's future, it's possible to see an opening for Benković at the King Power.