It was only in September that Scott Sinclair was being spoken about as a potential wildcard for England's World Cup squad – he was thriving at Celtic and had played a key role in their treble success. Now, however, there’s talk of him leaving the Scottish champions.

The Three Lions chatter has stopped. Not that Gareth Southgate seemed to want him anyway.

“I had a conversation with Brendan [Rodgers] about him at the end of last season,” the England boss said. “He’s a good player but we have good quality in that area of the pitch. At the moment I think he is just below the level of what we have already got.”

Reports in the Scottish Sun suggest the 29-year-old wants to return to England, with Bournemouth and Brighton and Hove Albion among the clubs interested in him.

So is it time for Sinclair for return to the Premier League? We have taken a look at his background and discuss why the time may be right for a move down south.

Born in Bath, Sinclair joined Bristol Rovers at the age of nine. Big things were expected of him from an early age.

He became the Pirates’ second-youngest first-team debutant aged 15 years and 277 days when he came on as a late substitute for Junior Agogo in a League Two game against Leyton Orient in December 2004.

Sinclair soon attracted attention from Chelsea and joined the Blues in the summer of July 2005. He had to wait until January 2007 for his debut, which came in the League Cup semi-final against Wycombe Wanderers. His first league appearance was in May 2007, as a substitute in the closing stages of a clash against Arsenal.

But he never established himself at Stamford Bridge. He joined Plymouth Argyle on loan in January 2007 and that would be the first of six temporary moves away from Chelsea. He eventually left for good in the summer of 2010, having played just 14 times in all competitions for the Blues, and just five times in the Premier League.

His first stop after leaving west London was Swansea City, where he made his mark. He scored 19 goals as the Swans, who were managed by Rodgers, were promoted from the Championship. He then struck eight times in his first season in the Premier League with the Welsh club.

That form saw him earn a move to champions Manchester City in August 2012, but like at Chelsea, he failed to make a proper impact.

The winger made just 11 appearances in the league in 2012/13 and joined West Bromwich Albion on loan for the following campaign. He couldn’t break into the first team there and played mostly in reserve games.

After returning to the Etihad in the summer of 2014, Sinclair again couldn’t get a spot in the starting line-up and left for Aston Villa on loan in January 2015.

After the club secured their Premier League survival, he joined permanently for £2.5million in May 2015: “This is the happiest I have been in a long time,” he said.

Sinclair didn’t last long in the Midlands though. With Villa being relegated, he departed for Celtic the following summer, and it was there where he finally turned his career around and showed the form that made him look so good at Swansea.

The attacker played a key role last season, scoring 25 goals in all competitions as Celtic made history by winning the treble.

Sinclair is still Celtic’s top scorer this season, with 17, but he hasn’t found the back of the net since January 23 and has been in and out of the starting XI in recent months. That’s led to talk about his future.

What are Sinclair’s main strengths?

Playing on the left wing, Sinclair uses his skill and pace to beat his man more often than not. It makes him a vital asset for Celtic.

You can see that perfectly in the stills below against Rangers. 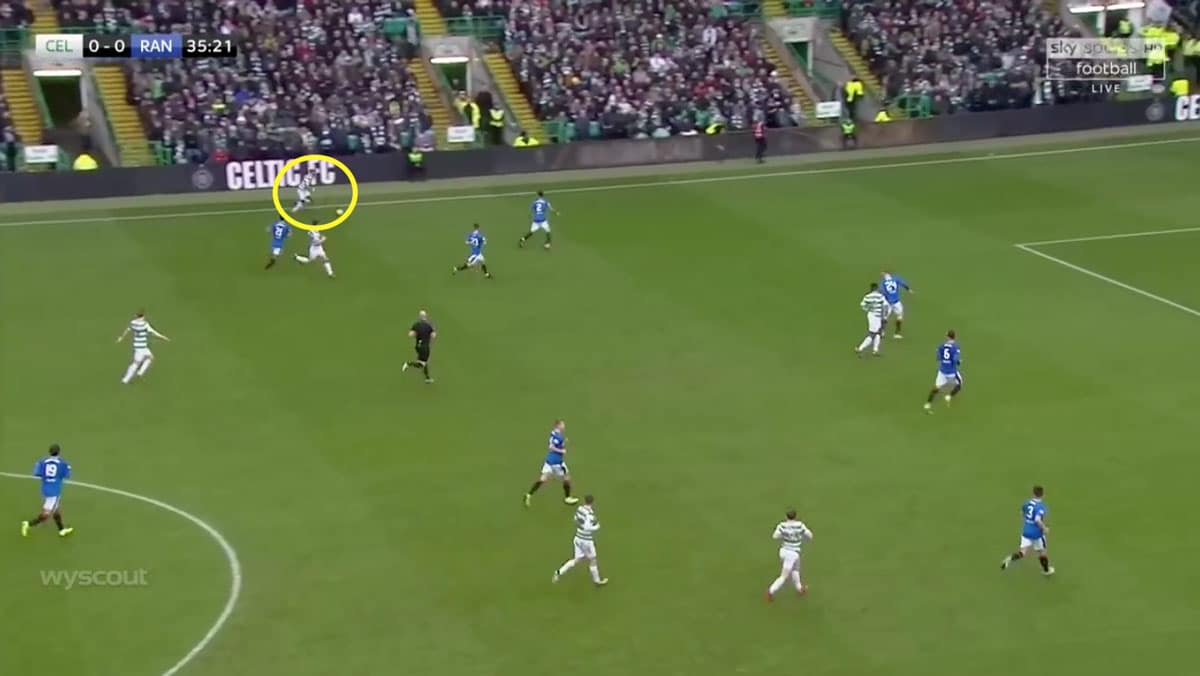 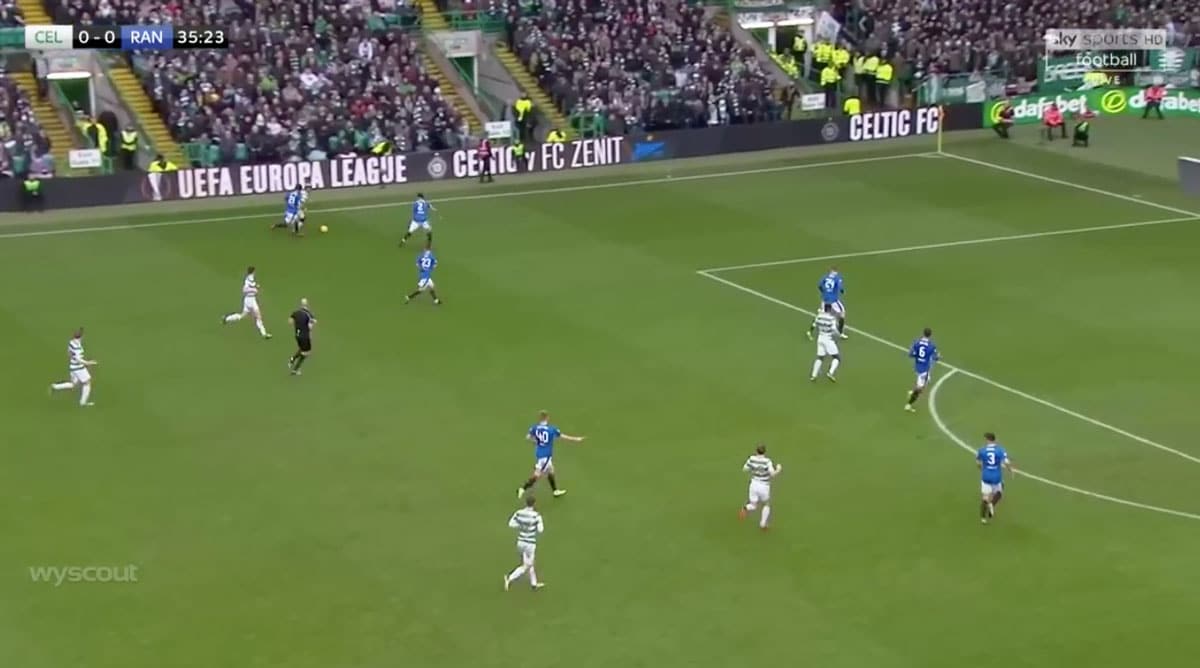 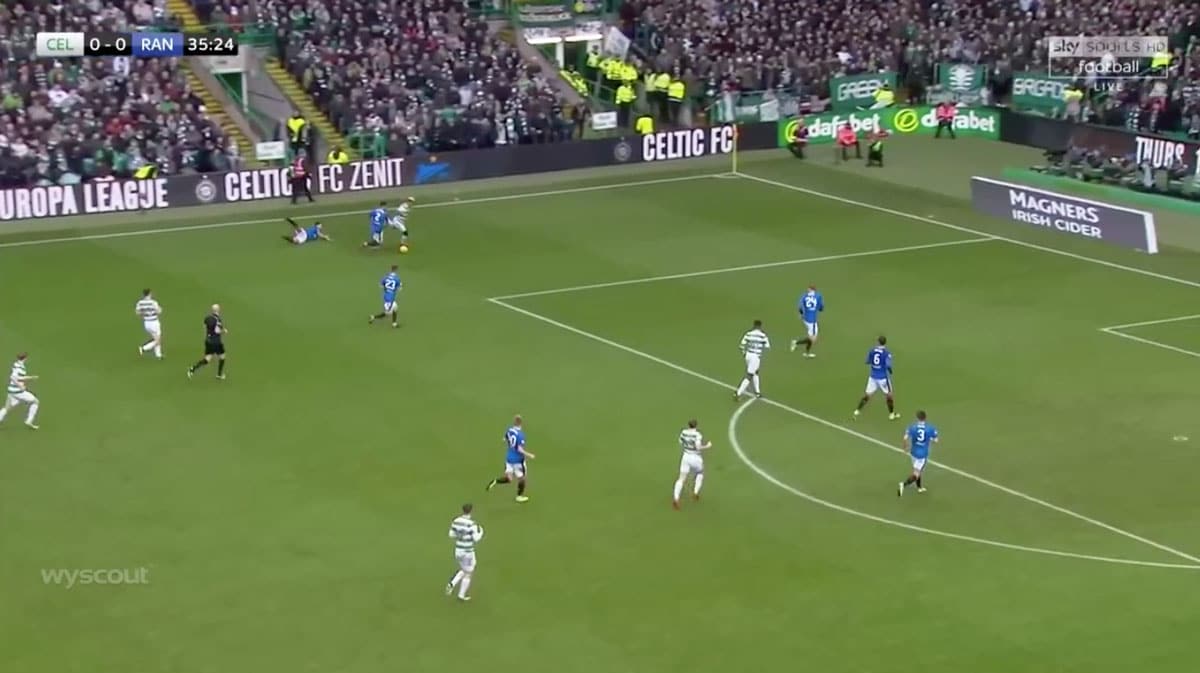 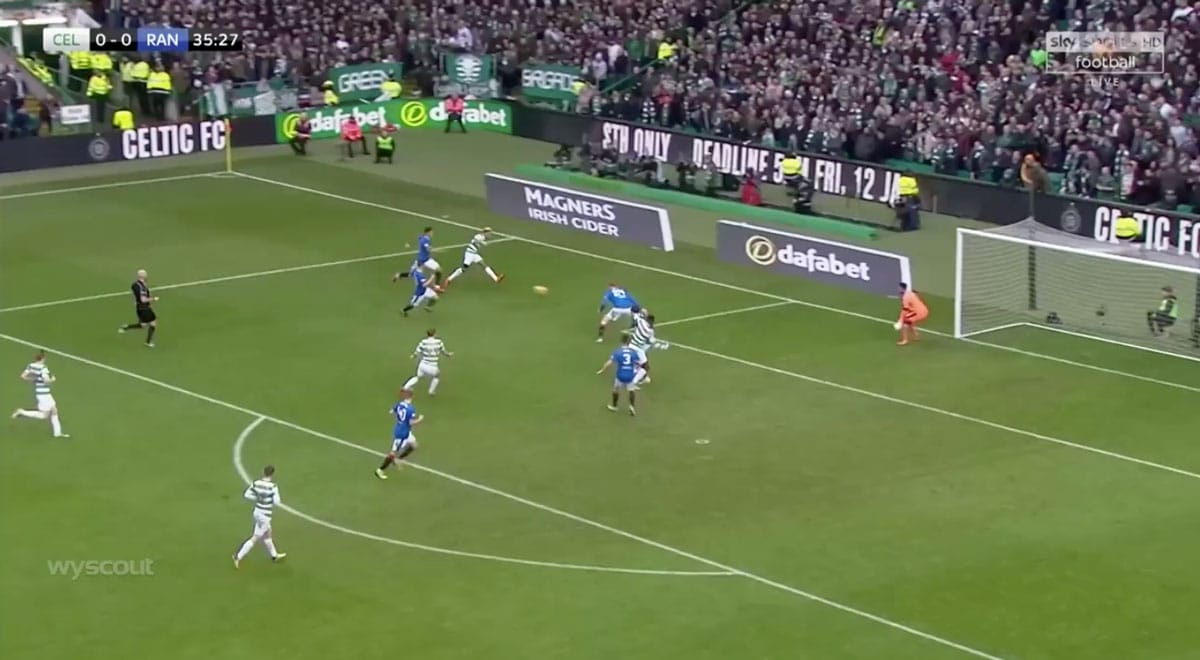 The 29-year-old picks the ball up on the left, with Daniel Candeias, Jason Holt and James Tavernier around him.

Candeias approaches, but Sinclair is deceptively strong and uses his weight to hold off the Portuguese midfielder.

Tavernier thinks he can nick the ball off the winger, but the Celtic man’s feet are too quick and he knocks it past the right-back. Before the Rangers defence can do anything, he’s in the box and in a position to put a dangerous ball in across the face of goal.

In the space of six seconds, he went from marked out wide, to creating a goalscoring opportunity. That’s what Sinclair gives a side. 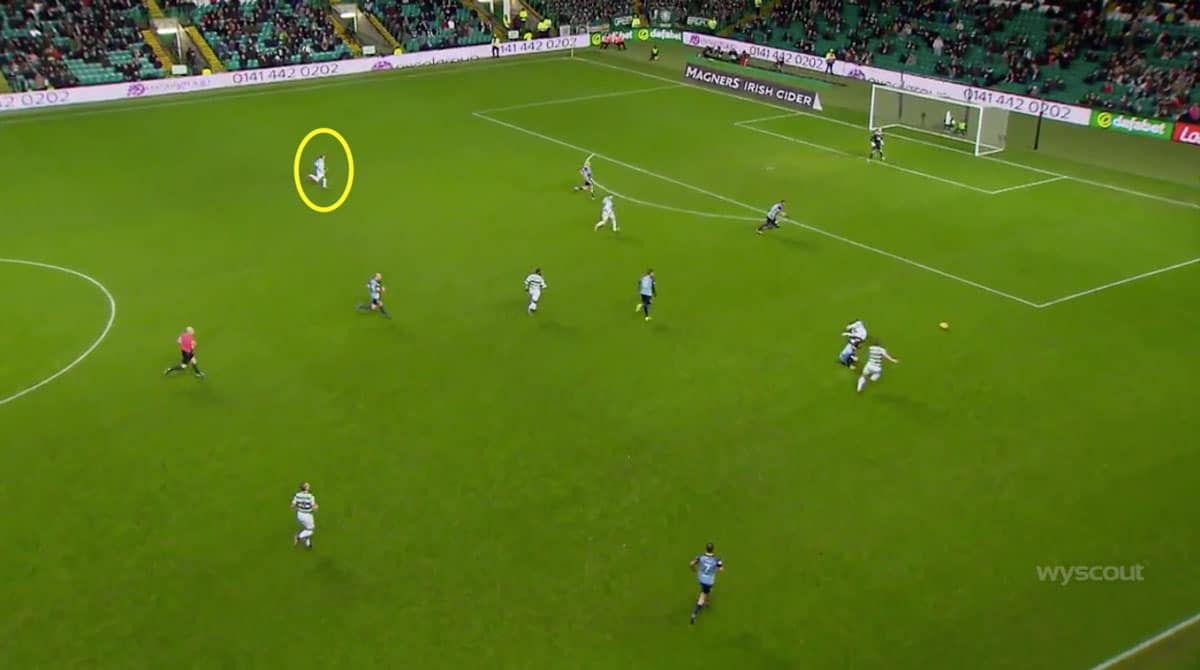 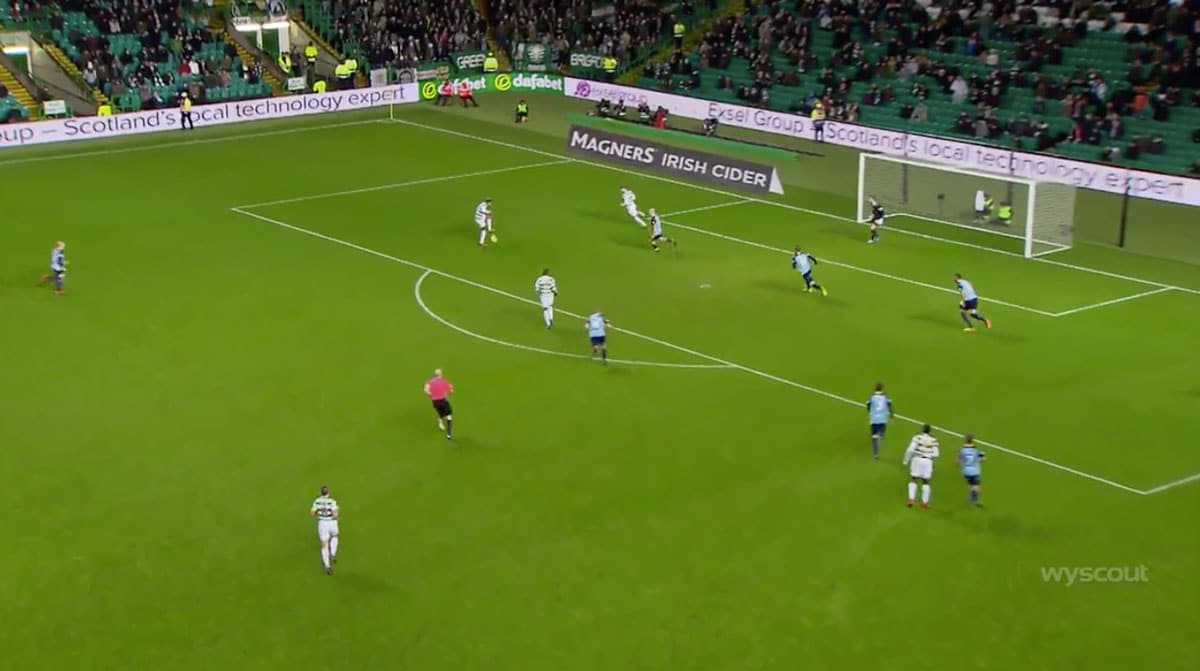 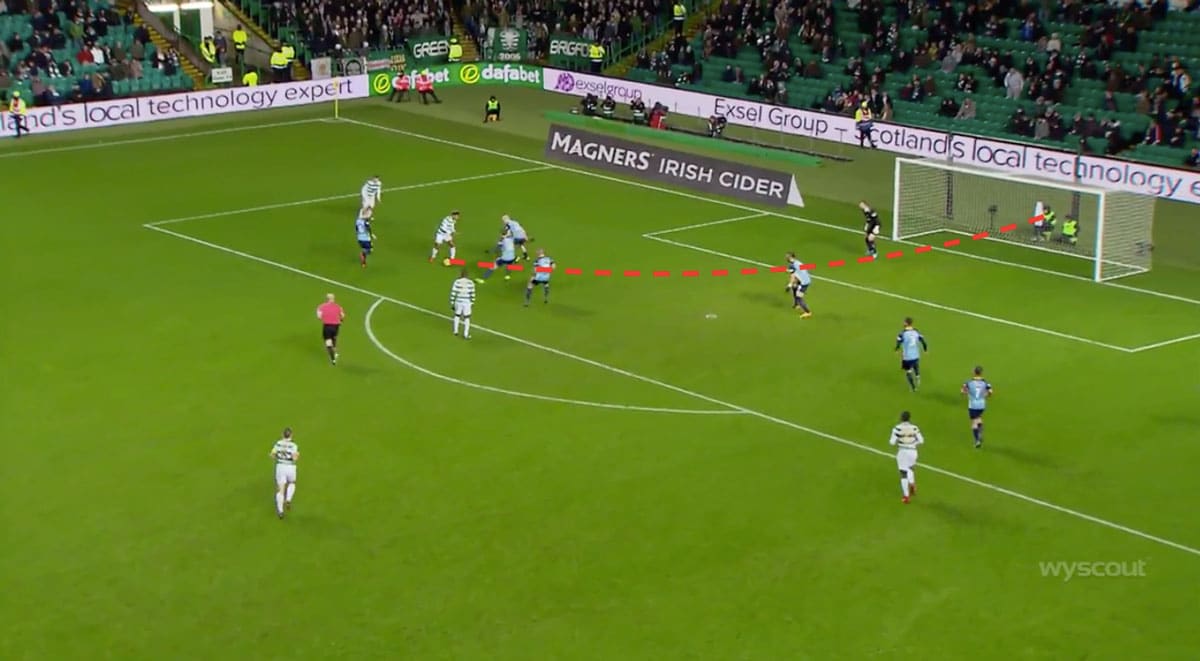 The stills above, taken from Celtic's clash against Hamilton Academical, show how deadly Sinclair can be. As soon as the Hoops are on the break, he is calling for a pass as he’s got free of his man.

The Englishman receives the ball on the left, takes his time, works it onto his stronger right foot and fires it into the top corner.

When he has that much time, he can be clinical.

What are Sinclair’s main weaknesses?

Sinclair’s biggest strengths are also his biggest weaknesses. He’s got great quality, but his game is largely built on getting space and using his pace to cut inside, dragging players out of position and fire in a right-footed shot.

He’s struggled this year at times as teams have worked out what he’s all about. The opposition have been doubling up and he’s been failing to get into the game.

That’s why he has barely been picked in recent weeks. When teams stop Sinclair doing what he does well, he doesn’t have much else. 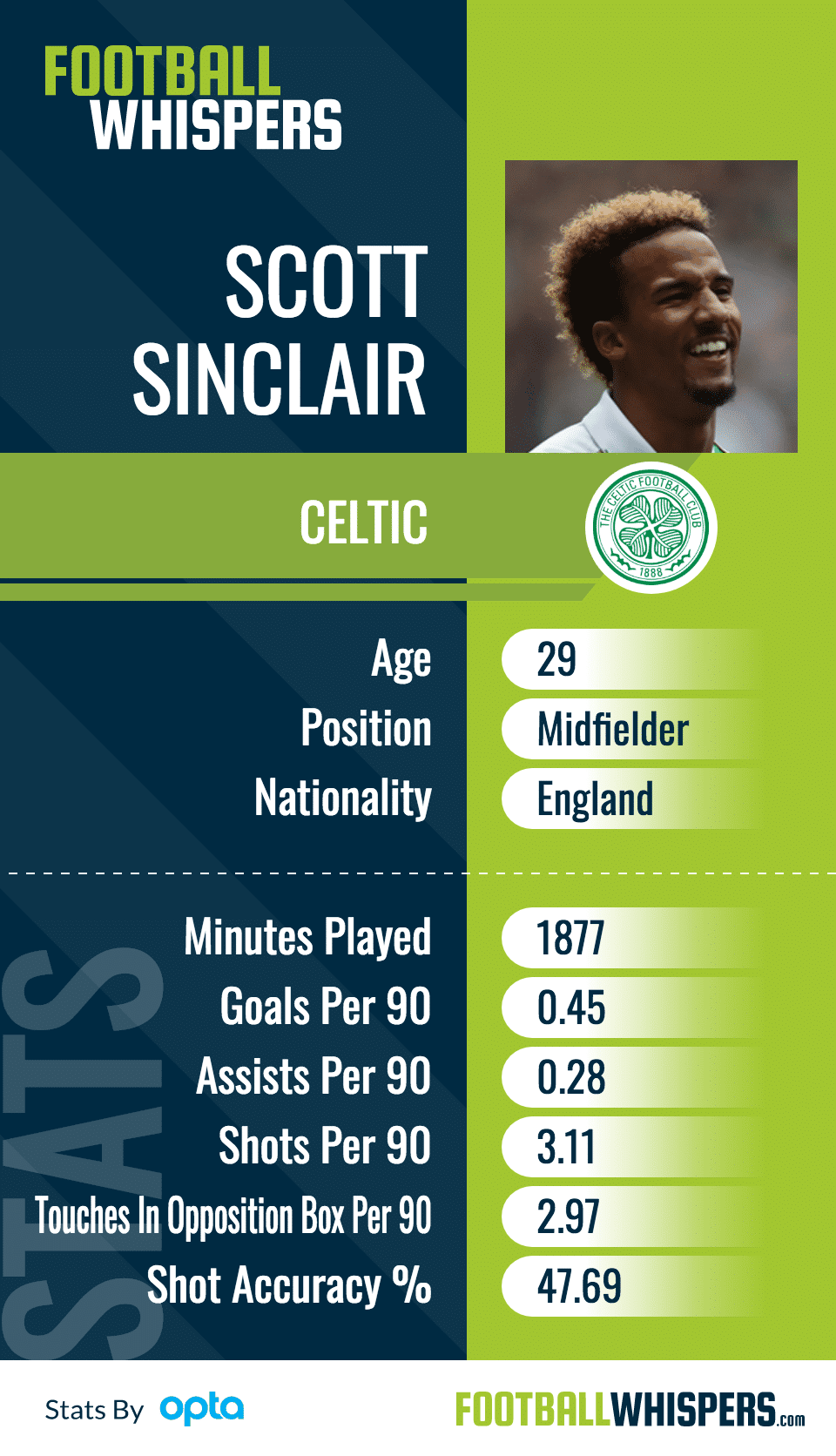 How much is Sinclair worth?

The forward joined Celtic for £3.5million two summers ago, and his stock has undoubtedly risen since then, as have player values in the transfer market.

He has two years left on his current deal so there is no need for the Hoops to let him go cheap.

The 29-year-old would likely cost upwards of £10million. His age would obviously count against Celtic, however. For example, Moussa Dembélé’s next club will be buying him based on potential, while Sinclair turns 30 next year and his value will only start to drop.

That could be why Celtic will consider selling him if an offer comes in.

Why a move away from Celtic may be best

Celtic’s No.11 has won everything he realistically can at his current club.

But it wasn’t just individually where Sinclair won big in 2016/17. He was a key player as Celtic became the first Scottish side to go a season unbeaten.

He has won the Scottish League Cup once more this term and is on the verge of another Scottish Premiership title. It is a great trophy haul.

Rodgers may look to freshen up his attack in the summer, with the Scottish champions being less prolific in front of goal this campaign. Given Sinclair has been out of the first team in recent games, a departure would make sense, rather than the club letting someone go who’s started more regularly.

And the winger may not be able to resist one final chance at proving his doubters wrong in the Premier League. And after two years in Scotland, he may feel it’s time to move back south of the border as he focuses on his family. He currently lives apart from his actress girlfriend Helen Flanagan and their daughter.

It would be a surprise to see Brighton move for the winger given they have José Izquierdo on the left, but he would offer competition and be a relatively experienced head in the Premier League, something the Seagulls’ squad lacks.

A move to Bournemouth may be more likely, with Eddie Howe tending to sign Brits. What's more, they have no real standout player on the left. Marc Pugh, Junior Stanislas and Ryan Fraser have all played there, but none of them have been able to make that spot their own.

It could be a position the Cherries want to strengthen in the summer, meaning going in for Sinclair would make perfect sense.