While also making a compelling case for being the greatest player of the Premier League era during eight seasons with Arsenal, Thierry Henry must be considered one of modern English football's most important, influential and game-changing talents.

Arriving at Arsenal somewhat unheralded in the summer of 1999, despite owning a World Cup winners' medal and setting the Gunners back a club-record £10.5million fee, even those aware of the French forward's gifts could not have envisaged the magnitude of the impact he would have. Not just on the club he was joining, but on entire an footballing culture.

The idea of what a striker should be was well defined at the time. The likes of Alan Shearer, Andy Cole and Robbie Fowler enjoyed tremendous success by rarely straying beyond the confines of the penalty area in search of the ball, instead waiting to be fed by their team-mates and reliably dispatching chances; goals were the only currency that mattered.

If a centre-forward didn't conform to this archetype, they were likely the type to drop from the frontline into the space between the opposition's lines of defence and midfield, scheming and creating chances. Think Eric Cantona, Gianfranco Zola or Dennis Bergkamp. In an era when 4-4-2 was king, these players forged lucrative partnerships up front alongside the aforementioned style of No.9. Today they'd likely be characterised as No.10s; attacking midfielders in a 4-2-3-1 or the like.

Henry fits neither description. During his formative years at Monaco, where he was given his debut as a teenager by Arsène Wenger, as well as with the French national team and later at Juventus, Henry had been a winger. There, his devastating pace, ability to play on either flank and cool finishing made him a dynamic final-third threat.

Upon his arrival at Arsenal, however, where Wenger was still enamoured with 4-4-2, there was no obvious position for Henry. A clue, perhaps, came in the shape of the player he was replacing; Nicolas Anelka's £23million departure for Real Madrid had left the Gunners in need of striking reinforcements. While Henry matched Anelka's physical attributes, and in particular his pace, the latter was the kind of striker who employed his speed to burst in behind defences, akin to Michael Owen, a contemporary at the time. Henry much preferred the ball into feet, and was a far greater technical operator.

Lacking the requisite defensive nous for a wide role in a 4-4-2 – having played predominantly in 4-3-3 up until this point in his career – and not appearing a natural fit to partner Bergkamp in attack, Henry's signing appeared to lack foresight.

Such assumptions would shortly prove misguided, but Henry's adaptation to his new surroundings was not instant. He was goalless in his first eight games, before opening his account with long-range strike against Southampton in September, and many of his early appearances saw him stuck out on the flank with Nwankwo Kanu or Davor Šuker preferred centrally.

But this was all part of Wenger's assimilation plan, and by the end of the campaign Henry and Bergkamp were the Gunners' undisputed first-choice pairing. The No.14 finished the season with 26 goals in all competitions, a career-high until that point.

Rather than mould himself into what was expected of a conventional striker, however, Henry redefined the position. His experience as a winger shaped some of his tendencies, as drifting wide to the left to find space before driving back inside on to his stronger right foot became a trademark.

Through the middle, his electric speed and flawless close control made him a nightmare for defenders. As did his ability to exploit the space behind the opposition's backline or drop off to receive the ball to feet, turn and attack.

Henry became both creator and poacher; scorer of great goals and a great-goalscorer when almost all his peers specialised only in one of those two arts. Henry famously once admitted he took just as much pleasure from providing an assist as he did from scoring himself – indeed, he still holds the Premier League record for most assists in a single season (20). 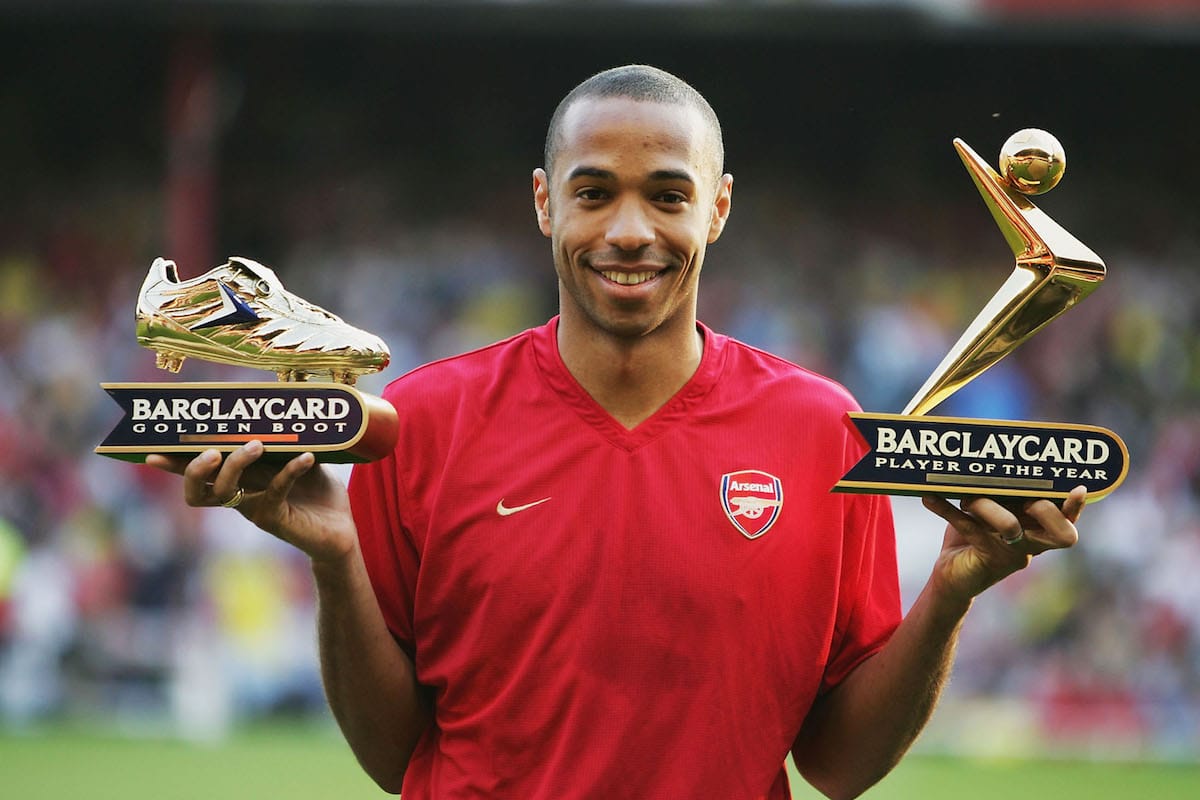 Sometimes accused of arrogance, the Frenchman was supremely confident in his abilities, and as well he should have been; he was voted into the Premier League Team of the Year six times, was a four-time Premier League Golden Boot winner, named PFA Player of the Year twice, and won the FWA version of that award three times. Henry's dominion over the ball was absolute – “When I step on the pitch, when I have the ball I know it’s mine. It’s just a feeling,” he once said.

Although he never won the coveted Ballon d'Or – he finished runner-up to Ronaldinho in 2003 and third in 2006 – for the first time since its founding in 1992, in Henry, the Premier League could make a legitimate claim to owning the best player in the world.

Always the consummate team player and the key figure in two title wins – including the unbeaten ‘Invincibles' of 2003/04 – two FA Cup triumphs and a run to the Champions League final in 2006, it is his canon of jaw-dropping goals for which Henry is most remembered. From his flick-up-and-volley to outfox Fabien Barthez against Manchester United, to stunning solo runs against Tottenham Hotspur, Liverpool and Real Madrid, the ever-inventive former Monaco star never seemed to run out of ways to reconcile ball with net. 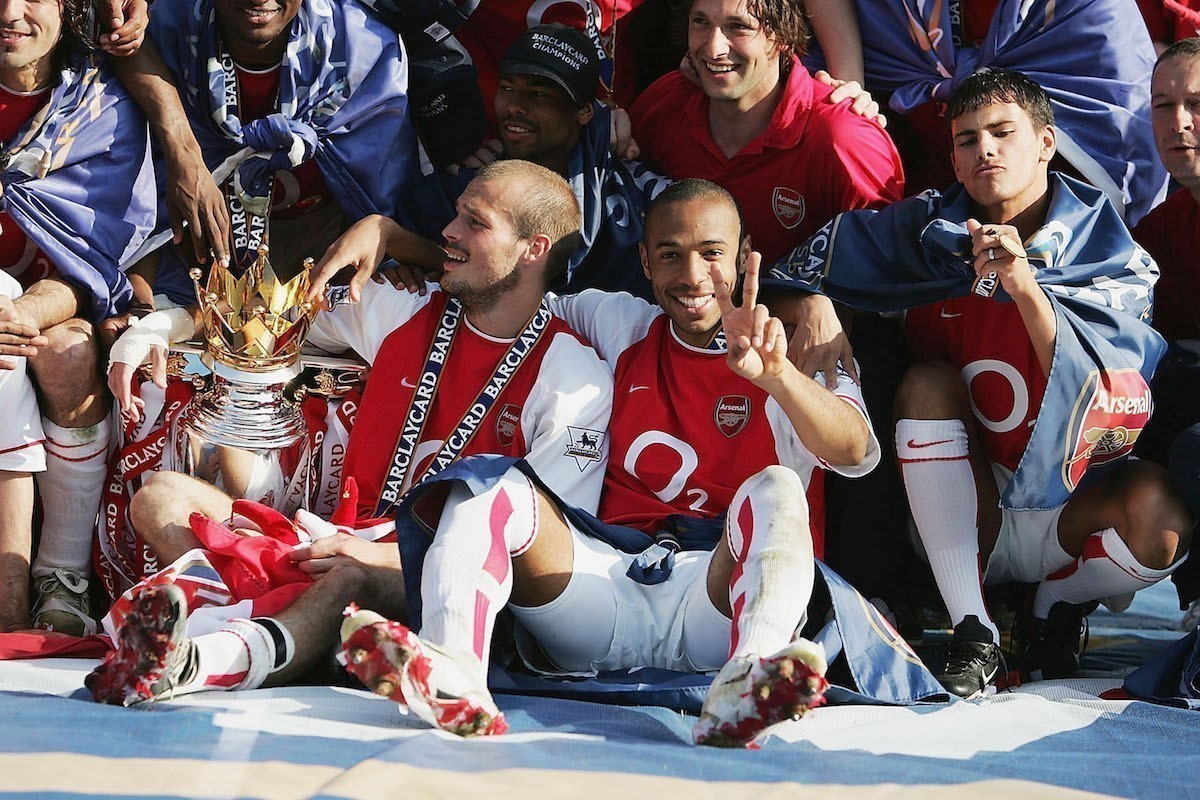 As one of the primary victims of Henry's brilliant individualism, sent stumbling to the turf with twisted blood as the Frenchman slalomed through to score against Liverpool at Highbury in April 2004, former Reds defender Jamie Carragher is well-placed to comment on how it felt to be left for dust by the Arsenal man.

“I’ve used this analogy before and I make no apology for using it again. When he hit top gear and ran past you, it was like trying to chase after someone on a motorbike,” Carragher says. “When Arsenal were ‘The Invincibles’ in the period between 2003-2004, Henry rivalled Ronaldinho as the best in the world . . . he is the finest player I have seen in the Premier League. His game didn’t have a weakness.”

Arsenal may have peaked with their unbeaten title triumph in 2004, but Henry kept scoring freely up until his departure for Barcelona in 2007, sticking with the club to provide continuity through their move to the newly built Emirates Stadium in 2006, leaving as their all-time highest scorer on 226 goals.

Adored by the Arsenal faithful, Gooners' love for Henry was reciprocated: “It took me a while to understand what that club [Arsenal] meant. That's why sometimes I got so mad, because I was so into it. I became a fan. I actually became a fan.” And an emotional return on loan from the New York Red Bulls in 2012 saw the then-veteran striker augment his haul in red and white by two goals.

Described as a “beautiful player” by Ronaldinho and a deemed “not just a great footballer” but also “a showman, an entertainer” by the late George Best, the last word on Henry's Arsenal legacy can only go to one man, the mastermind behind it: Arsène Wenger.

“That showed you how immense this player was. He was Usain Bolt with a top football talent.”