From his earliest forays into the Liverpool first team it was clear that, in Steven Gerrard, there was something quite special brewing at Anfield.

A lifelong Reds fan who had been on the club's books since he was nine, his senior debut, replacing Vegard Heggem against Blackburn Rovers as a scrawny and enthusiastic 18-year-old in November 1998, was the fulfilment of a boyhood dream.

Before the days of YouTube highlight compilations and in-house TV channels, Liverpool fans could have been forgiven for not understanding the magnitude of what was about to unfold before them. Besides, Gerrard was overlooked by England at schoolboy level and, by his own admission, took a trial at Manchester United in his teens to nudge the Merseyside club into offering him YTS forms.

Perhaps, then, Gerrard's vast talent, which was not manifested in elaborate stopovers of fancy, back-heeled flicks, was not as readily apparent at youth level as, say, Robbie Fowler and his goal-scoring prowess, or Michael Owen, all raw pace and precision finishing.

In his initial outings – despite being, by his own admission, “out of my depth and out of position” – it was clear that this youngster was different. Right from the off Gerrard embodied the Kop spirit: he chased lost causes as those in the stands imagined they would were they blessed with the talent to represent their beloved team; he never shirked a challenge and showed a level of commitment that belied his nervousness.

By the 1999/00 season, Gerrard had found his feet within the Liverpool first team, moved inside from the flank to regularly partner Jamie Redknapp in central midfield. Still in his teens, the authoritative aura that would go on to define his 17 seasons in the Premier League began to be forged. From a positional point of view, his role within the team would evolve and shift forms several times over the next decade and a half, but his leadership, combativeness and inspiration had taken root – his shoulders growing broader in preparation for the weight they would often come to bear.

Gerrard learned to not only live with the pressure and expectations of being the hometown hero at the club he supported, he quickly discovered it could be a motivator. “We are being judged all the time and you have to accept it and embrace it and enjoy the pressure,” he told the Daily Mail in 2014. “That’s what I have learned to do ever since I was 19. I had to. There is no hiding place. People will point fingers.”

The Liverpool side that Gerrard happened upon was some measure short of the vintage Anfield teams of old. Usurped at the summit of English football by bitter rivals Manchester United, the Reds still held a certain allure and were regularly a threat in cup competitions, but routinely underwhelmed in the league. As the dying embers of the generation marked out by the Fowlers, Owens and Steve McManamans transitioned into Liverpool's next phase, a treble of FA Cup, League Cup and UEFA Cup was attained in 2001, and Gerrard played a key role with 49 appearances. But their third-place Premier League finish that season showed Liverpool were still a step or two behind the country's very best.

As the Anfield icons of the 1990s moved on, Gerrard remained. A new era was dawning and it would centre around the gifts of the now-England international midfielder. Gradually released from the shackles of his defensive-midfield role, it became apparent that the youngster's true quality lay in his ability to drive through the middle of the park with a box-to-box remit, crunching into tackles in his own half and bursting forward to carry the fight at the other end of the pitch.

By the time of Rafael Benítez's arrival at Anfield in the summer of 2004, coming from Valencia where he had just upset Real Madrid and Barcelona to claim two La Liga titles in the space of three years, Liverpool's inability to sustain a title challenge had worn on Gerrard, who began to question whether it was time to put his career before his love of the club.

The master tactician was handed a squad replete with players who, if truth be told, probably wouldn't have caused a selection headache for Sir Alex Ferguson or Arsène Wenger at the time. But he added majestic pass master Xabi Alonso from Real Sociedad and goal-scoring winger Luis García from Barcelona. Still lacking the depth to challenge domestically over a 38-game season, Europe was prioritised and, against all odds – and in the most dramatic fashion possible – the Champions League was won. 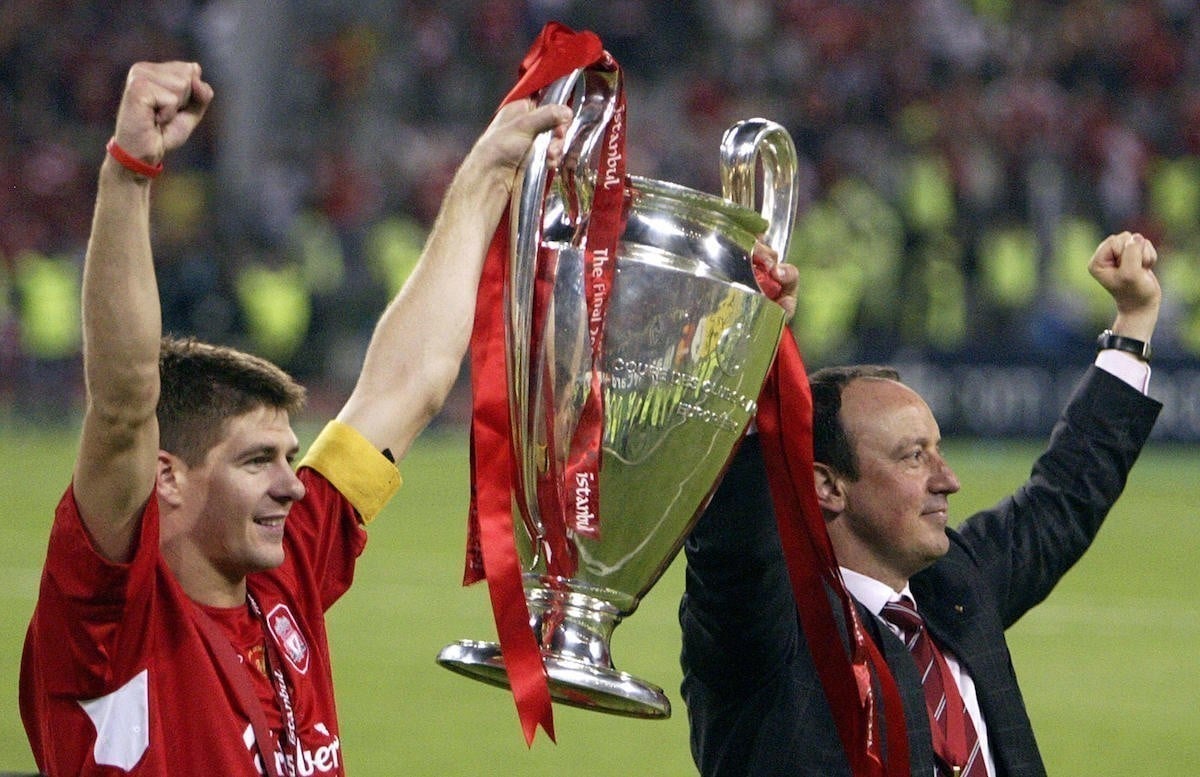 Although Benítez's meticulous tactical planning had built a foundation for this unlikely success, Liverpool certainly wouldn't have come close to their fifth European Cup without their inspirational leader, who'd assumed the captain's arm band in October 2003, one of Gérard Houllier's last significant acts as Reds bosss.

Gerrard produced a stunning, 25-yard half-volley to rescue Liverpool from the brink of elimination against Olympiacos in the group stage, and he was the thrusting force of nature behind the most incredible comeback in Champions League history in the Istanbul final against AC Milan. Trailing 3-0 by half-time, Liverpool were down and out – all hope, it seemed, was lost. Not for Gerrard, though. Perhaps exhibiting the kind of optimism in the face of reason that is ultimately the source of despair for many a football fan, he remained determined; he fought.

A period of six second-half minutes, which was started by Gerrard's flicked header beyond Milan goalkeeper Dida and culminated shortly after one of his trademark forward forays drew a penalty, had seen Liverpool draw level with a shellshocked Rossoneri. The Reds would got on to claim victory via penalties; Gerrard, of course, kept his nerve from 12 yards.

So impressed was opposition coach Carlo Ancelotti by Gerrard's ability to manifest a fairytale turnaround for his side that he tried to sign the Englishman, aiming to pair him with Italian midfield craftsman Andrea Pirlo. Milan's advances were given short shrift by the Liverpool skipper.

However, Gerrard seriously considered leaving Anfield in the summer of 2005, handing in a transfer request just weeks removed from the Champions League triumph. José Mourinho, then in charge of Chelsea, had made Gerrard his top target – as he would again at Inter Milan and Real Madrid – and, with Liverpool only able to finish fifth in the Premier League despite their continental glory, the midfielder was ready for a change of scenery.

Except he wasn't. As what threatened to become a chaotic transfer saga began to gather pace, Gerrard had a change of heart, instructing his agent to inform Liverpool that he intended to stay. A new £100,000-a-week contract was penned soon after.

“The satisfaction of one title with Liverpool, no matter how long it took, would always eclipse three or four at Stamford Bridge,” team-mate Jamie Carragher would later reflect. “Ultimately Stevie realised that.” 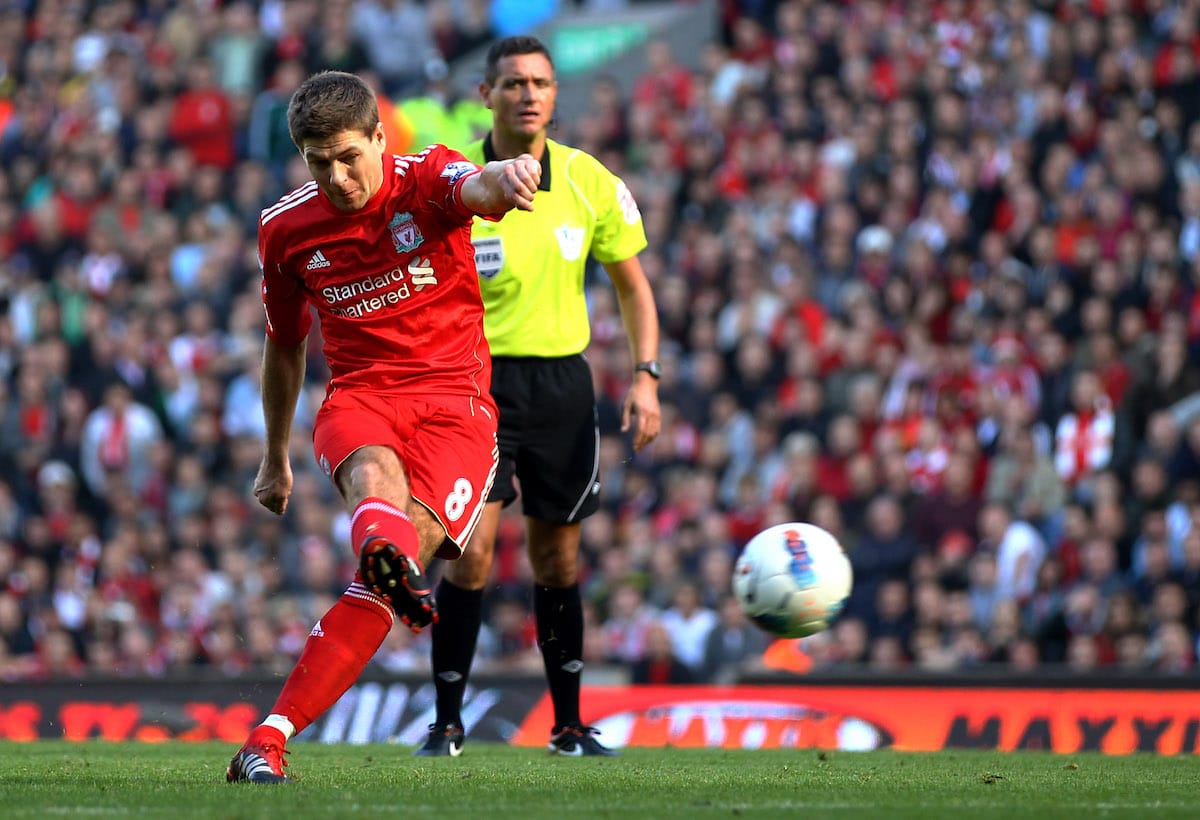 Unfortunately, that title would never come, although he twice came close: firstly under Benítez in 2008/09, when Gerrard was freed to partner the dynamic Fernando Torres in attack, driving Liverpool to second place, finishing with 86 points and defeated only twice; then again in 2013/14, with Gerrard, 34 years old by this stage, in the role of deep-lying playmaker as Luis Suárez banged the goals in up front.

The 2013/14 season will, of course, be remembered for Gerrard's unfortunate slip against Chelsea, allowing the Blues to score and ultimately costing the Reds their grip on the title race, having led for much of the campaign. Liverpool fans hold Gerrard far too dear to lay the blame for their collapse at his door, but, although it was a case of pure rotten luck, the slip could have broken a less strong-willed individual. Not Gerrard.

“Does it affect me? No, it drives me on to perform better,” he told the Daily Mail. “It has taken time to recover from last season, of course. For players and supporters. It was a huge setback when we fell short. It hit me hard.”

Chief among the reasons why Liverpool fans were able to look past that moment of misfortune is that, through the years, Gerrard consistently saved his best for when the pressure was on, especially when silverware was on the line. Whether it was his Istanbul heroics, his stunning 30-yard rocket in the 2006 FA Cup final versus West Ham United, or his penchant for plundering goals of breath-taking quality against Manchester United, Gerrard was the man for the big occasion, no slip could change that.

Gerrard left Liverpool to join LA Galaxy in 2015, his powers on the wane and unable to provide inspiration through demonstration as he had for so many years. But he is and will always be remembered as one of the club's true greats, rivalling the one and only “King” Kenny Dalglish as arguably Liverpool's best ever player.

What set Gerrard apart was his unique blend of desire and supreme technical ability. Through fame and fortune, 114 England caps and 710 appearances for Liverpool – and captaincy of both – he remained the same local lad, just another fan; ever relatable yet equally celestial in the eyes of those who worshipped at his feet for the best part of two decades.

“I’ve had tons of offers to advertise products bare-chested and I’ve always said no,” He wrote in his book, simply titled, Gerrard: My Autobiography. “Maybe that’s why, unlike most leading players, I’ve never asked for an image rights deal with Liverpool … It’s disgusting for a player to ask for image rights from his club … They pay you well and you work for them.”

Dutch manager Guys Hiddink, a Champions League winner with PSV and former Chelsea boss, summed up Gerrard's unique appeal perfectly: “Technically and tactically he is the best. His passion is enormous, he means as much for a great team as George Best. He is a player who fans can identify themselves with and a man who carries the love for his club on his club badge. There is not another player in the world who combines all those qualities.”

And even long-time Manchester United manager Sir Alex Ferguson put aside local rivalry when assessing Gerrard's sheer quality: “He has become the most influential player in England, bar none. Not that Patrick Vieira lacks anything, but Gerrard does more.”

Whether central or out wide, as scorer, creator or destroyer: Gerrard could do it all, and he did. All with a heart that thumped to Anfield's beat, soundtracked by You'll Never Walk Alone, bleeding and breathing Liverpool.