“It was mid-way through the 1998/99 season when there was a knock on the door of my office at Anfield. I had never met the chap. He came in and introduced himself as a cameraman who covered football in Europe. He knew we were looking for a strong defender and recommended we take a look at Sami.”

It may sound like a scrapped idea for a prequel to the Goal! movie franchise when former chief executive at Liverpool Peter Robinson tells the story of how the Reds first became aware of Sami Hyypiä, but the future Liverpool legend’s career at Anfield had a fairytale beginning.

It sounds farfetched but centre-back confirmed the tale in an interview with LFChistory.net: “It was an English cameraman working as a freelancer for Finnish TV. I met him later on and he told me that he was this cameraman who said to Peter that he should check out this Finnish guy in Holland.”

Liverpool took the advice on board and sent Ron Yeats, the club’s chief scout, to watch Hyypiä, playing for Willem II in the Eredivisie at the time, come up against Sparta Rotterdam.

He had a nightmare 90 minutes with his side losing 4-1. However, the Reds weren’t put off and returned six months later.

The centre-back himself knew he’d caught the eye this time around: “I called this Dutch agent after the games. ‘What did they say?' I thought I had played well.

“He said: ‘They're coming next weekend again.' F*****g hell, I thought. That took like ages. It was such a long time for me. It became a little more serious when (Gérard) Houllier came himself to watch a game. I met him after the match and he was telling me his plan a little bit.”

In May of 1999, the Merseyside club signed Hyypiä, a lifelong Liverpool fan, in a deal worth £2.6million.

At the time many would not have envisaged the career he would have at Anfield. He would arguably become Liverpool’s best value signing since the inception of the Premier League.

Houllier immediately placed his faith in the defender and partnered him alongside Stéphane Henchoz at the heart of the defence.

The Reds lost to rivals Manchester United in the September of 1999 and it's a game remembered for Jamie Carragher scoring a brace in the wrong end to give the away side a 3-2 win. However, the match was also the first time Hyypiä found the back of the net for his new club; an excellently timed diving header.

It was the first of many big goals he would end up scoring for Liverpool on his way to becoming a cult hero. Again, it's fairytale stuff. Houllier's men may have lost but his first goal for the club just so happened to be against United, he Reds biggest rivals. You couldn't really write it, could you?

After just seven first team games, and three days after the defeat to United, he was made captain against Hull City for a League Cup tie and then when club captain Jamie Redknapp was ruled and vice-captain Robbie Fowler was also injured. It was Hyypiä who effectively replaced them as captain for the remainder of the season.

“Phil Thompson said he was amazed how I coped with the English game. Three months after I came we played away at West Ham, before the matches Houllier came to me to tell me that Jamie Redknapp was injured and Robbie Fowler was injured… so you have the armband.

“Of course that surprised me a lot but I was happy. That didn't change me at all. He had a reason to give the armband to me and I felt that I didn't need to change anything.”

You'd be forgiven for thinking that this was still a rejected script. It doesn't appear to be realistic. The club you supported as a boy scouts you after a camera man says they need to take a look. You get the dream move, score your first goal against their biggest rivals and are effectively made captain after just six months.

And then his  second season on Merseyside saw him win the treble. Hyypiä appeared in 58 games throughout the campaign as the Reds beat Birmingham City in the Worthington Cup final, Arsenal in a dramatic FA Cup final and Alaves in a game still considered to be one the most entertaining European finals in history.

Fowler lifted the Worthington Cup on his own. The Toxteth terror then had Jamie Redknapp, who was injured at the time, beside him when the Reds lifted the FA Cup. But it was Hyypiä who joined him front and centre to hoist the UEFA Cup above their heads. 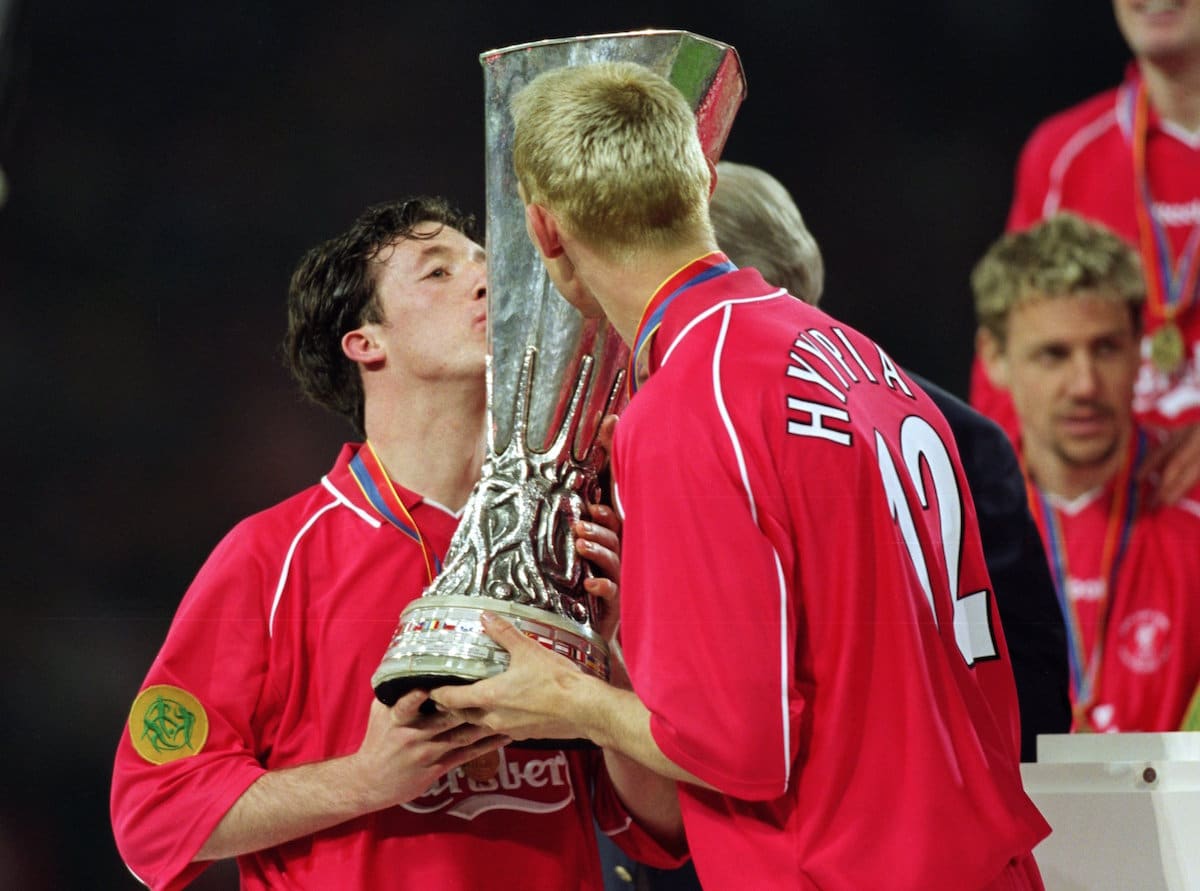 Fowler and Redknapp were both eventually moved on and Hyypiä was made the captain of the club with a young Steven Gerrard as his vice-captain. However, inn the October of 2003, Houllier made the decision to swap their roles.

It was a move the centre-back agreed with and almost welcomed: “The day when Houllier decided to give the armband to Stevie, it was like a relief for me. I got some of the pressure off my shoulders and I started to play better.”

And Gerrard, in a round about way, acknowledged Hyypiä's role in him becoming the player he was.

“He's been here for the whole time I've been in the first team and has been a great influence and magnificent servant – an absolute legend,” Gerrard said in an interview shortly before the Liverpool No.4 left the club

“I took over from him as captain in 2003 and there was some controversy at the time, but not from Sami, who was incredibly supportive of me from the very start.

“That is a measure of the man. He should be regarded as a one of the greats of this club and I don't say that lightly. He has certainly helped transform Liverpool and got us back to where we should be.”

Under the meticulous eye of Rafael Benítez, who arrived to replace Houllier at Anfield, Liverpool as a club evolved and transformed. The Spaniard shipped people out and looked to bring in players he wanted.

At one point it appeared as though Hyypiä's  day were numbered on Merseyside when Mauricio Pellegrino, with Benítez at Valencia, joined the club in January 2005.

But the Finland international saw off the challenge and played a vital role in Liverpool's reemergence as a European juggernaut. Between 2005 and 2009, Benítez assembled a star studded team and guided the Reds to two Champions League finals in three seasons.

They added the FA Cup to the trophy cabinet and finished as runners up in Hyypiä's  final campaign with the club in 2008/09, four points shy of champions Manchester United despite losing just two matches all season.

Liverpool had Fernando Torres and Gerrard catching the eye on a regular basis and Xabi Alonso and Javier Mascherano controlling the midfield, but Benítez's side are always built from the back. Tellingly, Hyypiä started in the 2005 Champions League final and the 2006 FA Cup final.

Jamie Carragher's performance in Istanbul is always talked about but Hyypiä was beside him repelling the AC Milan attacks during the second half onslaught. The pair struck up quite the partnership with Hyypiä revealing Carragher was the best defender he played alongside:

“It was great to play with Carra. The biggest difference between them was communication. I never heard Stéphane (Henchoz) but I heard Carra…too much. I think I have never played with a better defender than Jamie Carragher.”

Benítez slowly phased Hyypiä out after the arrivals of Daniel Agger and Martin Skrtel. It was the Dane who started the 2007 Champions League final with the Liverpool No.4 having to settle for a place on the substitutes' bench. 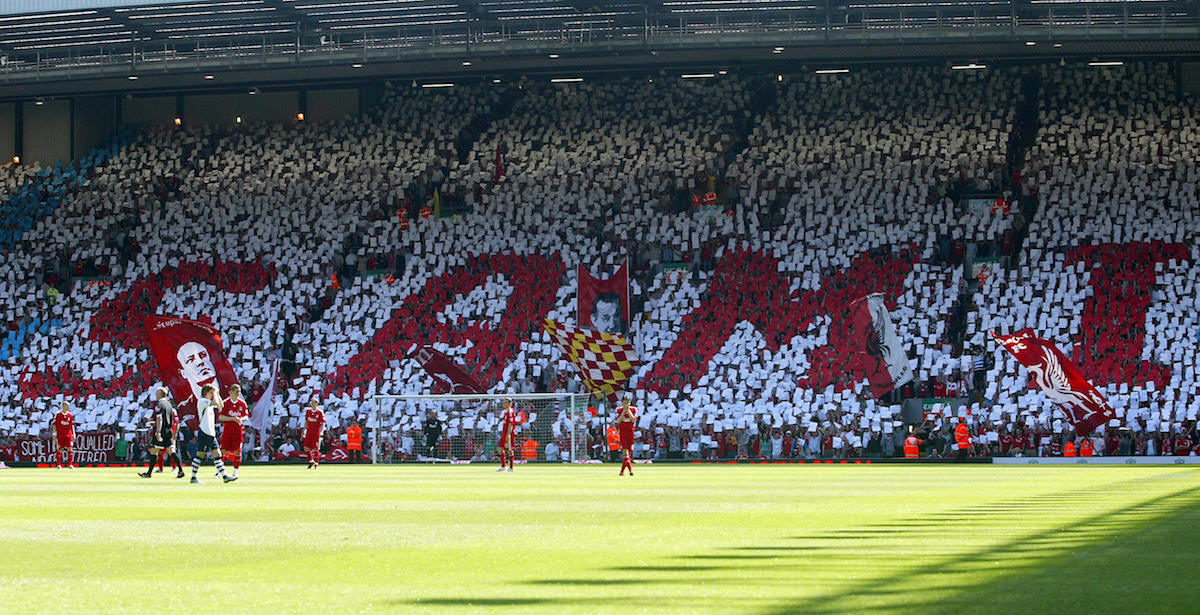 He made just 19 appearances during his final season with the club and came off the bench during the last game of the season, at home to Spurs. The Liverpool players held an emotional Hyypiä aloft to soak up the fans support at full time.

When you look back at his career with the Reds, and really look at it in detail, you realise just how remarkable it was.

He scored goals against Manchester United and Chelsea in the Premier League. He notched three against Arsenal in three different competitions – the one in the Champions League quarter-final often gets lost amongst the chaos in that game.

Many remember Torres' thunderous curled effort and that Ryan Babel scored Liverpool's fourth after putting his blistering pace to full use, but it was Hyypiä who got the home side back into that game with an arrowed header that no goalkeeper in the world could stop.

It happened again against Juventus during the run to the 2005 Champions League final. The Serie A giants arrived to Anfield and found themselves behind inside of ten minutes after Hyypia ghosted in at the back post to guide a left-footed volley past Gianluigi Buffon.

It was superb technique but then Luis García had to go and make it all about him by scoring an incredible half volley from 25-yards out to put the Reds in control. Not that Hyypiä would've minded, he was a man willing to let others revel in the limelight.

Perhaps that is because he had his fairytale. He was the Liverpool fan spotted by chance that become a club legend. Goals in big matches, captaining his boyhood side and helping the Merseysiders add ten pieces of silverware to their trophy cabinet.

Hyypiä truly is a Liverpool legend and a Premier League icon.