Footballers' nicknames are usually uninventive, unimaginative and say little about the player in question. But that wasn't the case with Robbie Fowler.

His Liverpool team-mates could have daubed him something like “Fowlsie” or “Fowlo”, or some other bland, nondescript monicker typical of training grounds and changing rooms throughout the game. But they didn't. Instead, former Liverpool defender Neil “Razor” Ruddock, no stranger to an outlandish nickname himself, labelled Fowler “God”.

Tongue-in-cheek though it may have been, Fowler's sobriquet was fitting. On Merseyside, football is akin to religion and Anfield is the chapel at which those with a red inclination worship. In the mid-1990s, the young striker's prolific touch in front of goal and effortless, unassuming demeanour provided escape, distraction and often jubilation for those packed inside their chosen temple.

Although, had “the Saint” not already been synonymous with Ian St John, the legendary Liverpool striker of the 1960s, it may have been an even more apposite pseudonym for Fowler. The working-class lad from Toxteth was not some celestial deity, he was no different – aside from his natural ability to put the ball in the net over and over again – to those who parted with their hard-earned cash to support the Reds every weekend.

Man Of The People

When he made his debut in a League Cup tie against Fulham in September 1993, scoring one and assisting twice, the travelling Reds support would have felt as though one of their own had pulled on their beloved shirt, and that they, their offspring, or at least someone they know, could do the same. He was the everyman from the beginning.

Fowler's status as a working-class hero was rubber-stamped in 1997 when he celebrated a UEFA Cup goal against SK Brann by revealing a t-shirt which expressed support for Liverpool dockworkers who had recently been controversially laid off – the gesture landed him a £900 fine from UEFA.

Rewinding to the time of his debut as an 18-year-old, Fowler's emergence as Liverpool's latest idol came amid an era in which discontent was brewing at Anfield. Manager Graeme Souness, despite an FA Cup win in his first season in charge, had earned the ire of supporters by axing a slew of established stars and selling the story of his recovery from heart bypass surgery to The Sun.

By the end of the 1992/93 season it seemed only a matter of time before Souness, as spiky and confrontational in the dugout as he had been as a player, would depart. The Scot lasted until January of 1994, when a shock FA Cup exit at the hands of Bristol City forced the club to take action, installing Roy Evans in his stead. 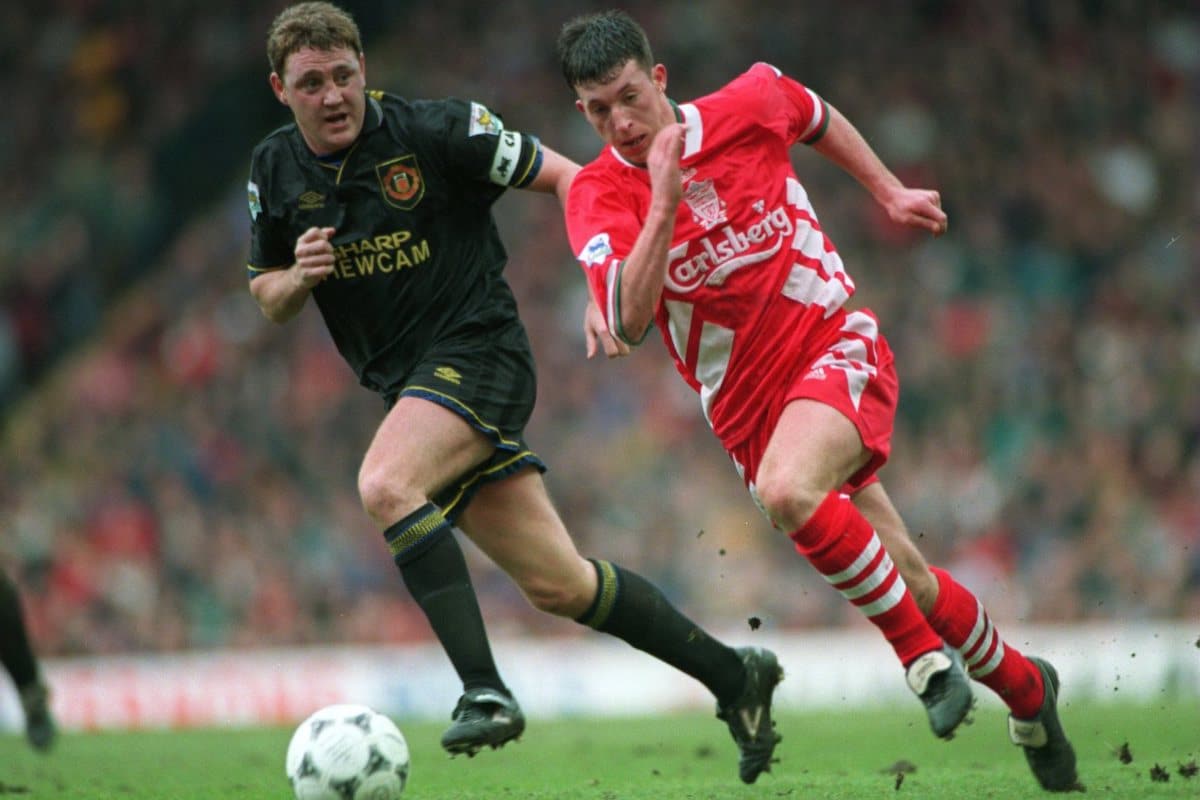 Liverpool‘s slip from title contention, disillusionment with the manager and the club's general direction meant that the red half of Merseyside was shrouded in negativity by the time young Fowler broke through. To borrow a line from American rapper, actor and poet Tupac Shakur, the burgeoning English striker was “the rose that grew from concrete”.

As a shining ray of hope and the embodiment of the feeling that better times were ahead, Fowler's cult status was assured instantly and cast in stone. In his first three full seasons in the senior side, he bagged a stunning 96 goals, and went on to hit the 100 mark for the Reds in just 165 appearances – one game fewer than it took the great Ian Rush to reach the same return. His stunning form was recognised by back-to-back PFA Young Player of the Year Awards in 1995 and '96.

One Of The Greats

Liverpool boast a proud lineage of top-class strikers, from their hugely successful side of the '60s through to Kevin Keegan, Kenny Dalglish and Rush, and the likes of Michael Owen, Fernando Torres and Luis Suárez thereafter. Fowler absolutely belongs in that esteemed list and is perhaps the most clinical and instinctive marksmen of them all.

Indeed, Rush, by that time in his mid-30s, served as mentor to Fowler upon his breakthrough into the first team. The legendary Welsh striker, as a Liverpool hero, one of the finest marksmen of his generation and a model professional, with his own powers fading, was the perfect man to guide, shape and advise the young star.

With either foot or his head, from long distance or close range, Fowler had the most valuable attribute a footballer can posses: he scored goals. Without being a speed merchant, he was quick; without being a brute in the box, he was powerful; but, above all, he was intelligent in the way he moved, his ability to find space.

Former team-mate Emile Heskey, describing Fowler's innate understanding and appreciation of how to bend the game to his will, said: “Robbie had the knack of slowing things down and knowing exactly where he wanted to put [the ball].”

As far as Fowler was concerned, there was no such thing as a half chance: any time he had sight of goal, he backed himself to score, and with good reason. His ability to instantly punish opponents for having the temerity to afford him even an inch of space inside the penalty area was best evidenced by his record-breaking hat-trick against Arsenal in the 1994/95 season.

His first strike against the Gunners on that August afternoon at Anfield, with a large section of the Kop cordoned off for renovation, was a sweeping finish beyond David Seaman from six yards as the ball dropped to the Liverpool striker inside the box – the ball always seemed to drop to Fowler and it was no coincidence.

The second, a guided finish into the bottom corner, showcased the young forward's precision: it was not the most violently struck effort, but it was accurate and just as unstoppable as any driven shot. 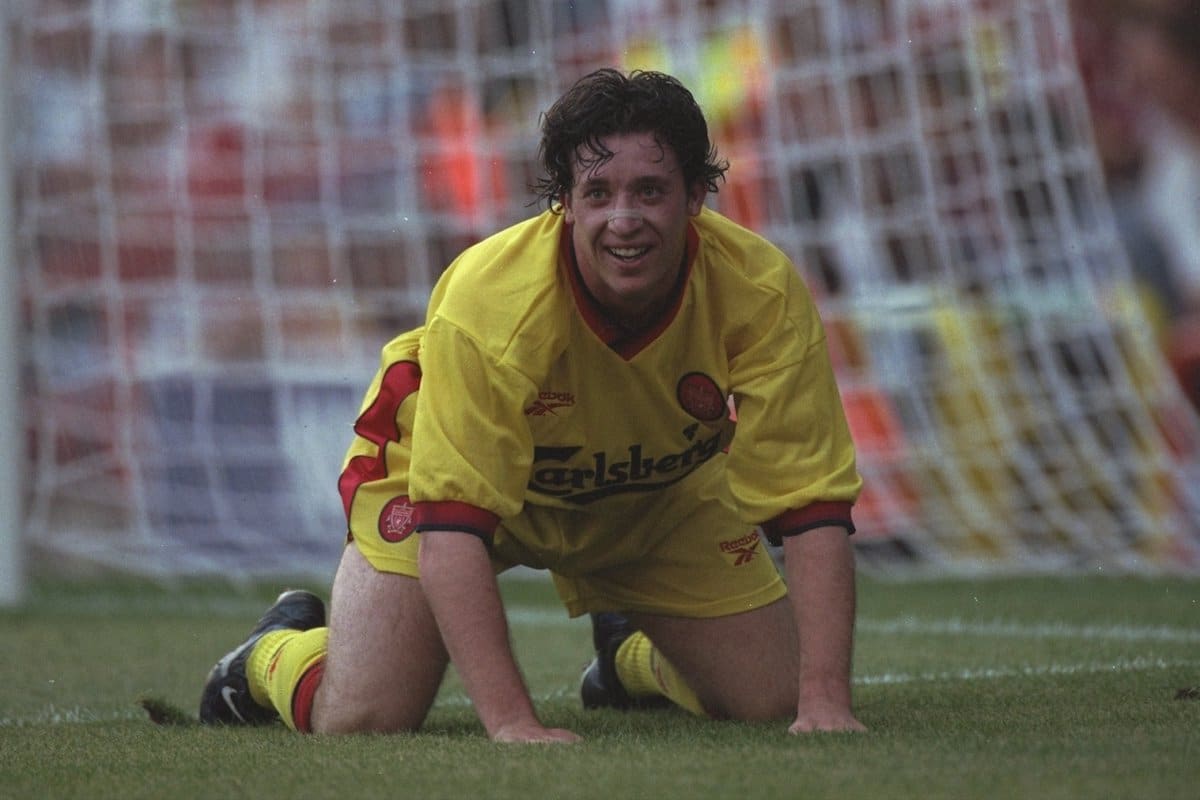 Fowler's hat-trick was sealed when he latched onto a John Barnes through-ball, holding off the close attention of Martin Keown and evading the onrushing Seaman, prodding home from close range as he bobbled his way around the England goalkeeper. From start to finish, his work was completed in just 273 seconds – a Premier League record which current Liverpool hero Sadio Mané went on to break in May 2015 while playing for Southampton.

As the Millennium approached, injuries had robbed Fowler of a step of quickness, and a teenage Owen had emerged as the latest bright young thing of Anfield and England. The pair were unsuited as a partnership and, ultimately, it was Fowler who had to give way, joining Leeds United in an £11million deal in 2001.

Having slipped behind Heskey in the pecking order and enduring strained relationships with manager Gérard Houlier and his assistant, Phil Thompson, Fowler was jettisoned from Liverpool without the send-off he deserved.

The subsequent years brought mixed fortunes, first with Leeds and then Manchester City, but there was to be one final chapter in Fowler's Liverpool story, a fairytale ending of sorts.

Under the auspices of Rafael Benítez and just six months removed from having claimed a fifth European Cup, Liverpool re-signed Fowler in January 2006. The player who returned to Anfield was not the dynamic and devastating striker fans would have remembered, but that mattered little: “God” was home.

Fowler described his elation at being back where he felt he'd always belonged as that of “a kid waking up on Christmas morning every day”. Three times he was denied his comeback goal by the offside flag before he eventually notched against Fulham – the same team he scored his first Liverpool goal against – in March, in the process overtaking Dalglish in the club's all-time goals standings.

His 18-month second spell with the club ended with a Champions League runners-up medal at the end of the 2006/07 season, and Fowler walked away from Anfield, this time for good, with 183 goals to his name, making him the sixth-highest scorer in the club's rich history.

Most of all, though, he got to say goodbye, properly this time. Still revered on one half of Merseyside – where misty-eyed reverie is inspired at the mention of his name – and his scoring feats at least respected on the other, Fowler took the Premier League by storm, burning brightly and adored even after he'd faded.