As he dances in front of the England supporters, almost 6,000 miles from home in Niigata, Japan, Rio Ferdinand's arrival at football's pinnacle is crystallised. He's just headed home a David Beckham corner to score his first goal for the Three Lions, setting England on their way to a 3-0 victory over Denmark in the last 16 of the 2002 World Cup.

England were eliminated in the next round, defeated 2-1 by eventual winners Brazil, but no player on the plane home to Blighty carried with him more credit than the 23-year-old centre-back.

Ferdinand's potential had been no secret; a Premier League debutant as a slender yet obviously gifted 17-year-old with West Ham United in 1996, he had been among English football's hottest properties long before his record-breaking transfer to Leeds United in 2000. But at the World Cup in Japan and South Korea, that potential was finally realised to its fullest.

Partnering Sol Campbell at the back, he'd been England's best player. Ferdinand displayed all the pace, preternatural ability to read the game and composure on the ball that marked him out as an elite prospect as a teen, without any of the lapses in concentration or tendency to overelaborate many felt had held him back slightly since.

Within weeks he became the world's most-expensive defender for a second time, joining Manchester United in a £30million deal which, taking up 19.9 per cent of the club's annual turnover at the time, was essentially more costly to the Red Devils than their £89million repurchase of Paul Pogba in 2016 (which equated to 17.3 per cent of their turnover). A Premier League winner in his first season at Old Trafford, he would go on to claim five league titles and a Champions League under the watchful tutelage of Sir Alex Ferguson. 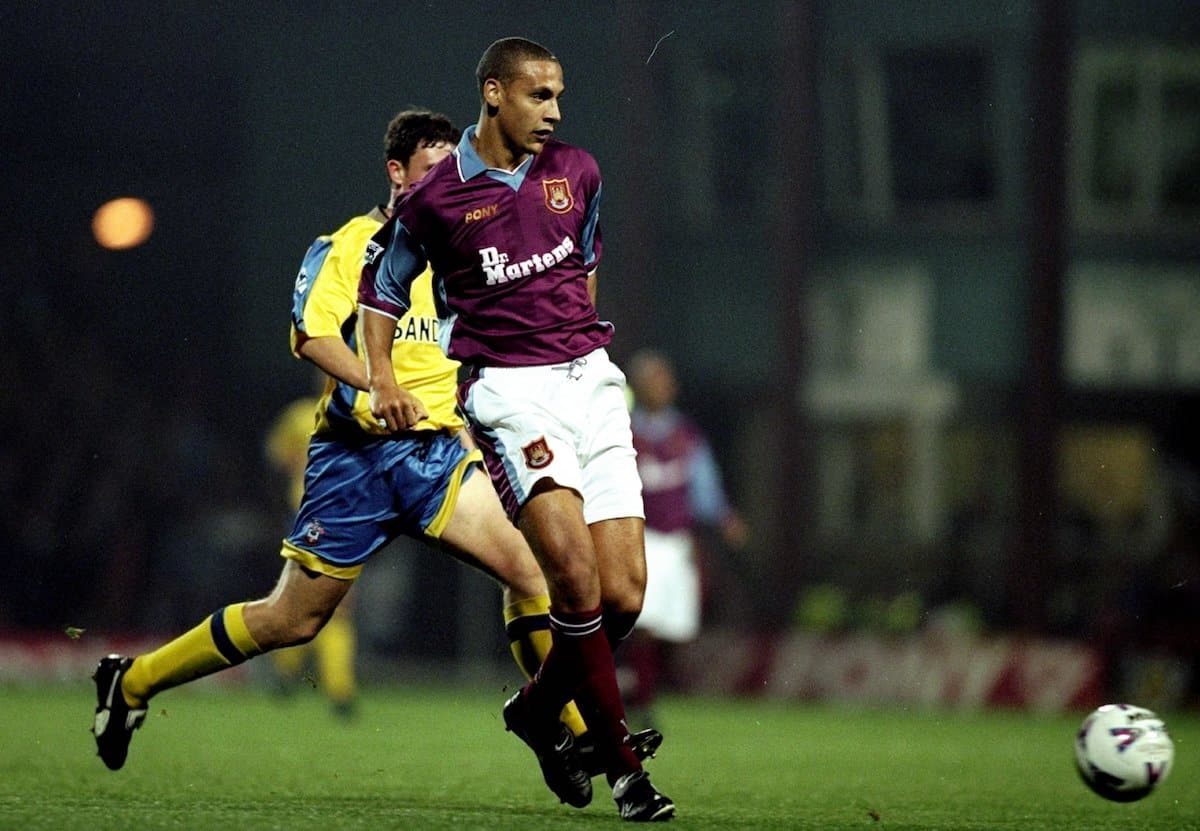 The Peckham native, whose natural athleticism was first signalled by a proclivity for gymnastics as a child, was one of the most sought-after young players in London in the early 1990s. After training with Chelsea, Queens Park Rangers and even far-flung Middlesbrough among others, he joined West Ham's academy in 1992.

Part of a talent-rich crop of youngsters emerging from within the Hammers' youth set-up at the time – including Joe Cole, Frank Lampard and Michael Carrick – Ferdinand started out as a creative attacking midfielder, before moving back down the pitch to where his physical gifts could combine with his technical skills to make him a unique central-defensive prospect.

“I played with Rio for the first two or three years of my career,” Lampard remembers. “I saw he come through as a young boy – he started as a No.10 and moved himself back to centre-half. He practised heading – heading maybe 50 balls after training when he was 17 to improve his game. To then see him at Manchester United as an absolute world-beater was amazing because I knew how much it meant to him. He was top class.”

Upon returning from a successful ten-game loan spell with Second Division Bournemouth in the 1996/97 season, Ferdinand became a regular in Harry Redknapp's West Ham team.

Aged 19, the young defender made his senior England debut in November 1997 and was selected as part of Glenn Hoddle's 23-man World Cup squad the following year. Although he didn't make make it on to the field during the finals in France, the tournament experience proved valuable for Ferdiannd, as he reflected in a 2018 interview with Sporf: “I didn't play one minute but I gained so much valuable experience – how the players prepare, how they recuperate, what they do in their spare time, the intensity of their training, the levels they get to … I got all that information and I soaked it up.”

In November 2000, he joined Leeds for £18million, a fee which set a new British transfer record and made him the world's most-expensive defender. His stay at Elland Road was short, with just 71 appearances in less than two years with the club, but it was while in white that his leadership skills began to blossom.

A 3-1 defeat to Leicester City on his Leeds debut proved no omen as Ferdinand provided the bedrock for a run to the semi-finals of the Champions League, with the defender even scoring against Deportivo La Coruña in the quarters. At the start of his second season, he was made club captain.

So impressive had Ferdinand's performances been during his two years at Leeds and with England at the 2002 World Cup, Sir Alex Ferguson, having reportedly tried to sign the defender before his switch to Elland Road, was convinced to break Manchester United‘s transfer record to finally land his man.

In the decade and a half since his move to United, central defenders have become increasingly important in a team's ability to build play from the back; not only is the modern defender tasked with keeping goals out, he must also now contribute to the construction of attacking moves. In this regard, Ferdinand was ahead of his time, particularly in England, where centre-backs were still valued much more for their aggression and combativeness than their passing and control.

This was not lost on Ferguson.

“Sometimes he would glide along in second or third gear, then take off like a sports car. I had never seen a big lad of 6ft 2ins possess such an impressive change of pace,” the legendary former United boss wrote in his 2013 book, My Autobiography.

“With time his concentration improved, and the expectations he placed on himself rose, along with the degree of responsibility he was willing to take on in the team and around the club. He became the complete footballer.

“Pace, and the ability to read the game,” Ferguson continued, “are non-negotiable at the top level in modern football. Rio had both, which is why I signed him. Not only could he defend, but he could bring the ball out. So although defending came first with me, it was encouraging to know my new centre-back could also start moves from the back, which became the norm later, with Barcelona and others.”

“Now the position of the centre-back is not just about defending or being nasty or tough,” he said. “It’s about knowing how to play football, control the ball, pass and be more comfortable in possession. This is something that ten years ago [in England] they didn’t understand. Rio was the first one who did it.” 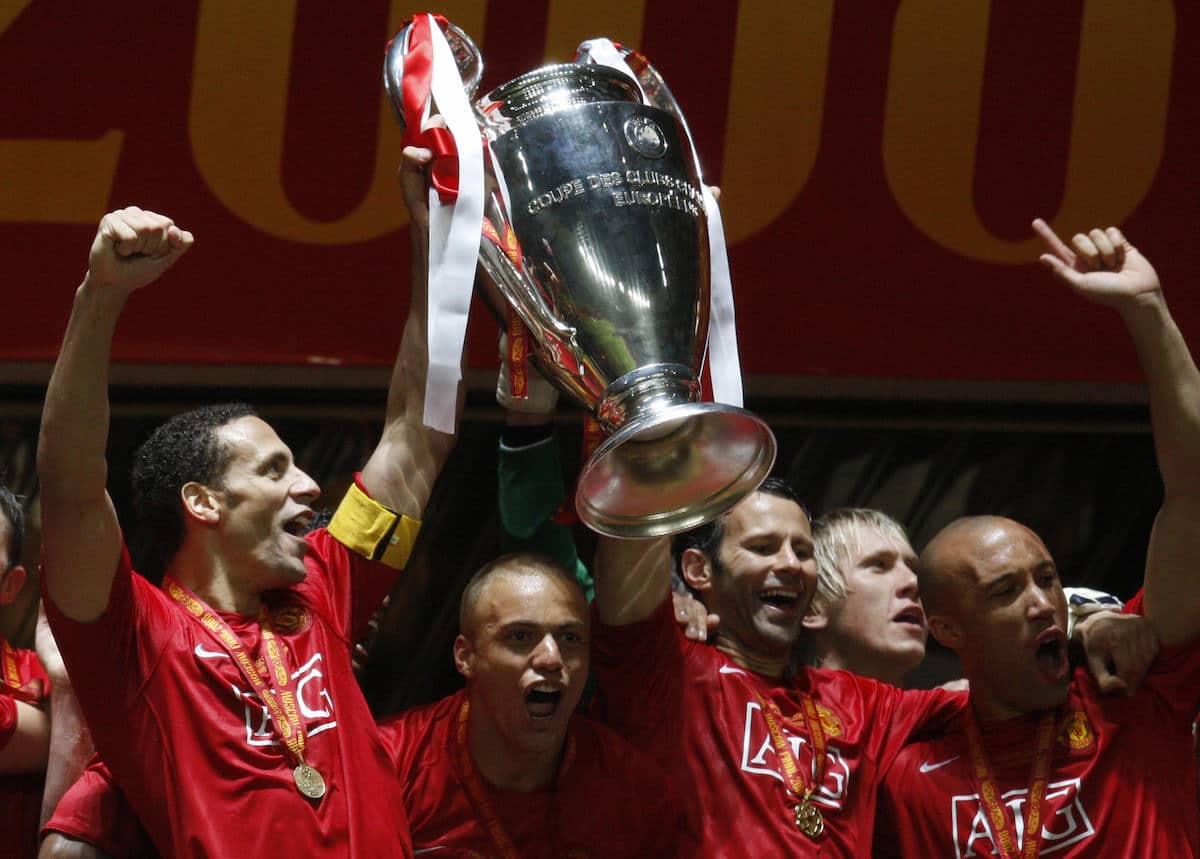 Ferdinand's impact at Old Trafford was instant, shoring up the Red Devils' backline in a way reminiscent of how Jaap Stam's rapid assimilation to the Theatre of Dreams upgraded United's rearguard dramatically in 1998. United were crowned Premier League champions at the end of Ferdinand's maiden season.

His second campaign with the club would bring the most testing period of his career, though. His failure to complete a random drugs test at United's Carrington training ground in September 2003 saw him levied with a £50,000 fine and an eight-month suspension. While few ever doubted Ferdiannd's indiscretion was borne of carelessness as opposed to guilt, he paid a heavy price – he missed the rest of the domestic season as well as Euro 2004.

He returned to action early the following season, producing a man-of-the-match performance in a 2-1 victory over rivals Liverpool at Old Trafford. Without Ferdinand, United had lost their grip on the Premier League title to Arsenal‘s ‘Invinclibes'; by the time he retuned, José Mourinho had turned Chelsea into English football's dominant force.

The arrival of Nemanja Vidić in January 2006, however, gave United the perfect yin to Ferdinand's yang; they now had a Rolls Royce backed up by an armour-plated Hummer.

United reclaimed their title in 2007 and didn't let go for three seasons, also claiming the Champions League in 2008. Although the great United side of this period is remembered most for the forward power of Wayne Rooney, Cristiano Ronaldo et al, the solidity Ferdinand and Vidić provided should not be underestimated.

When Ferguson retired in 2013, Ferdinand, by now 34, saw his fortunes begin to fade. He has been openly critical of replacement boss David Moyes' methods and left United in the summer of 2014, after 455 appearances, five Premier League titles, one Champions League and many other accolades, to join QPR, retiring after one season at Loftus Road.

“I thought I would be at United for a couple of years,” Ferdinand told The Mirror in 2013, “maybe three or four, and then go abroad somewhere. But I just fell in love with Manchester United.