The one attribute that is valued above all others in a goalkeeper is presence. Vague and unquantifiable though it is, the way a keeper “fills his goal” is vital to top-level success.

Whether it's sound communication with his defence, generalship of his penalty area or just sheer size, presence, in a goalkeeping sense, is difficult to define, but everyone can recognise when they see it.

In the Premier League's quarter-century existence, no keeper has had greater presence between the sticks than Peter Schmeichel. The edificial Dane stood 6ft 4 with shoulders almost as broad as he was tall.

Unmistakable thanks to a shock of blond hair, a beacon of a red nose, and, often, arms waving and fingers pointing at the Manchester United backline he marshalled – “On [the pitch], Schmeichel was a volatile individual . . . capable of causing a row in an empty house” Ferguson remarked in his (second) autobiography.

Debate often rages, whether among friends in pubs or on social media, over which players, from the division's formation to the current day, would make a fictional Premier League greatest XI.

Arguments ensue over the virtues of a ball-playing centre-back like Rio Ferdinand or a more traditional stopper such as John Terry; or whether Ryan Giggs' longevity should be prised over Robert Pires' inimitable peak; do Thierry Henry and Alan Shearer get in together, or does one make way for Eric Cantona, Dennis Bergkamp or Gianfranco Zola?

But the one position over which there is rarely any discourse is goalkeeper: it's Schmeichel, obviously.

In his eight seasons at Old Trafford, the first of which predating the Premier League's creation, Schmeichel won five league titles, three FA Cups, one League Cup and the Champions League. He was the bedrock of two distinct generations of sides under Sir Alex Ferguson; the first being the dynamic team of Paul Ince, Andrei Kanchelskis and Cantona, the second the eventual treble winners of David Beckham, Paul Scholes and Dwight Yorke.

The Danish international was the constant through Ferguson's years of growth and regeneration in the 1990s. When one group was dismantled to make way for the illustrious young academy graduates later known as the ‘Class of 92', Schmeichel offered continuity, experience and leadership. Indeed, when Roy Keane was forced to sit out the 1999 Champions League final through suspension, it was the No.1 who, clad in lime green rather than devil red, wore the armband against Bayern Munich.

It's difficult to picture the United sides of the '90s without Schmeichel's imposing, barking figure guarding the net. It is even harder to imagine a time when the ‘Great Dane' was not the very best at what he did; although he was not faultless, he rarely erred. But there was a period – albeit very short – when Schmeichel was much less assured, with doubts cast over whether he was robust enough to cut it in England's physical top flight.

In the early days of his United career, having been signed from Brondy for just £505,000 in August 1991 – a deal Ferguson described as “one of the bargains of the century”, which owed greatly to the fact only months remained on the goalkeeper's contract with the Danish side at the time – Schmeichel was shaky when coming to collect high balls, not yet accustomed to the rigours of his new surroundings and too easily rattled.

That phase didn't last long, though, and Schmeichel, who was already 27 and a full international of four years when he made the move to England, soon began to shine. In the summer after his first campaign with United, he starred for Denmark at the 1992 European Championships, as the famous ‘Danish Dynamite' side captured an unlikely triumph. Then, the following season, he helped the Red Devils become the first ever Premier League champions. By this point, the towering goalkeeper had well and truly established himself as one of the world's best in his position.

Despite growing pains upon his arrival, Ferguson never doubted Schmeichel's ability. The Scottish manager first set eyes on the commanding keeper in Spain, where United and Brondby shared the same facility for a warm-weather break around 1990.

At the time, the Danish club wanted a large return for their prized asset, so Ferguson played the waiting game, striking when the iron was hot as Schmeichel's contract wore down – while freedom of movement for out-of-contact players was not introduced until the advent of the Bosman rule in 1995, a player's value still decreased as they approached expiring terms. 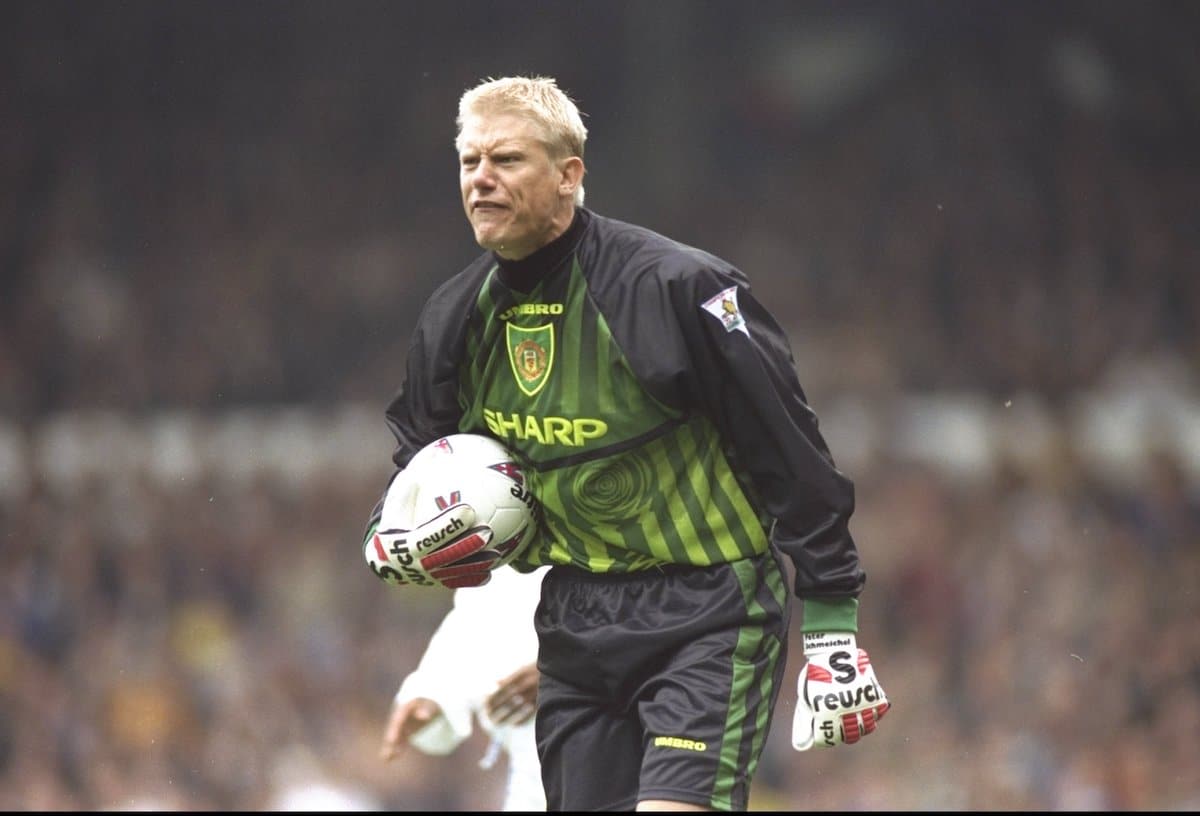 In the interim, the United boss would send Alan Hodgkinson, the club's goalkeeping coach at the time, on scouting missions to Denmark to run the rule over Schmeichel. The resulting reports were always glowing: “He's a certainty. Take him,” the former England keeper asserted.

Wise words and advice Ferguson never hesitated in taking. The manager's faith was rewarded in spades as, for all the upheaval and rotation in other areas of the squad, to Schmeichel's immense credit, the goalkeeping position was never an issue between 1991 and '99. “Schmeichel pulled off saves he wasn't entitled to make,” Ferguson wrote of his greatest goalkeeper. “There were moments of wonder. ‘Jesus, did he do that?' I would ask. He had such spring, such athleticism.”

In a fitting finale to his United career, after 398 appearances, 153 clean sheets and even a goal scored, at the age of 35, Schmeichel decided to opt for a quieter life in Portugal, announcing he would depart Old Trafford for Sporting Lisbon at the end of the 1998/99 season.

His last game was the Red Devil's memorable, magical comeback victory over Bayern to secure the Champions League, the final piece of the treble and the only piece of major silverware missing from Schmeichel's collection, at the Camp Nou. Famously flipping head-over-heels in celebration when Ole Gunnar Solskjaer netted a stoppage-time winner, the great keeper's last act as a United player was to lift the famous trophy aloft.

United struggled to find an adequate heir to Schmeichel in the years that followed, running through the likes of Mark Bosnich, Massimo Taibi and Fabian Barthez before settling on Edwin van Der Sar in 2005 – the Dutchman had been Ferguson's preferred choice six years earlier, but he had already committed to Juventus by then, while then-United chairman Martin Edwards had shook on a deal with free agent Bosnich.

Schmeichel was soon back in the Premier League, joining Aston Villa in 2001 and Manchester City the following year, before retiring in 2003 with United still reeling from his absence.

“You don't recover from losing a Peter Schmeichel,” Ferguson said on reflection. “He was the best goalkeeper in the world, and his presence, his personality, were suddenly no longer there.”