Arriving from AC Milan, where he'd barely featured in 12 months, in a £3.5million move in the summer of 1996, few could have forecast the impact Patrick Vieira would go on to have at Arsenal.

By the time of his signing in August, the Gunners had dispensed with manager Bruce Rioch and were yet to appoint a full-time replacement. This raised eyebrows among some more astute observers, with questions raised over whether an external force was driving Arsenal's transfer policy.

Of course, Arsène Wenger took the reins at Highbury the following October, and Vieira would later admit he chose the Gunners because he knew of his compatriot's impending appointment.

From there, one of the Premier League's greatest captain-manager combinations was forged, but it almost didn't come to pass. Had they been able to agree personal terms with the then-20-year-old midfielder, Ajax would have benefitted from Vieira's multifarious gifts. The Amsterdam club has been home to Arsenal greats such as Dennis Bergkamp and Marc Overmars in the past, and their loss was absolutely the Gunners' great gain on this occasion.

The Arsenal Vieira found was vastly different from not only the team, but the club he would go on to help build over the next decade. Gripped as many English clubs were at the time by a drinking culture, and behind the times in terms of diet, preparation and tactics, the French youngster's athleticism and professionalism helped set a new benchmark.

While the old guard were gradually phased out by Wenger, the young Vieira set about impressing in his early Premier League appearances. A debut from the bench against Sheffield Wednesday in August was quickly followed by a first start three days later. Vieira was off and running, establishing himself and the driving force of the Arsenal midfield through 38 appearances in his maiden campaign in England.

The summer of 1997 brought the arrival of fellow French central midfielder Emmanuel Petit, with whom Vieira would form his first – and arguably most – dominant midfield partnership at both club and international level, claiming the Premier league title and the World Cup together at the end of the 1997/98 season.

This was also the season that saw Arsenal fight back from an 11-point deficit to dethrone Manchester United at the summit of English football. The Gunners beat the Red Devils at Highbury in November of 1997, highlighted by a sweeping 20-yard strike by Vieira to beat Peter Schmeichel in an exhilarating 3-2 win. But it was their 1-0 victory at Old Trafford in March, by virtue of an Overmars goal, that tipped the balance of the title race in their favour.

Vieira was a champion for the first time in his career, and had cemented his status as one of European football's finest young central midfielders, demonstrating his physical, technical and leadership skills throughout the Gunners' title charge.

Vieira's peak straddled the pre- and post-specialists era. He arrived at Arsenal before defensive-midfield destroyers proliferated, and before it became widely acceptable for a midfield player to focus almost entirely on attacking duties, leaving the legwork to others.

As a central midfielder, the Arsenal captain was all things. He was a ball-winner who offered protection to his defence, a powerful driving force crucial to transitions, and a wonderfully gifted technician capable of both scoring and creating. 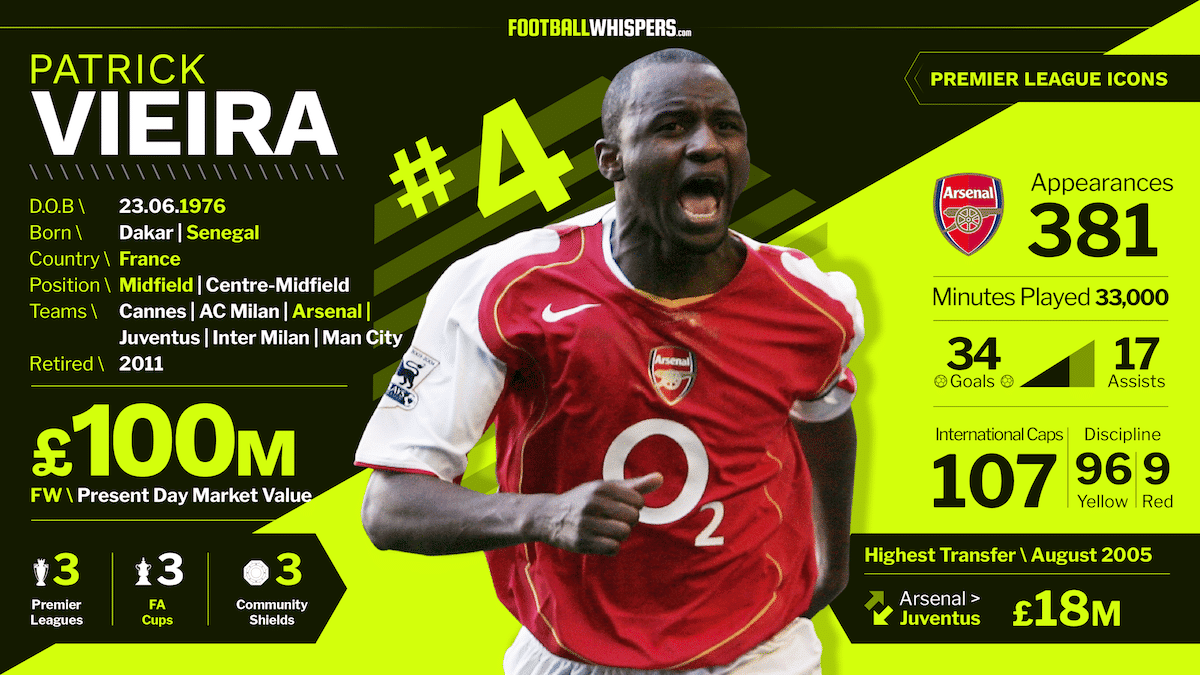 Arsenal would secure another Premier League title in the 2001/2002 season, but not before Manchester United manager Sir Alex Ferguson launched an audacious bid to sign the French star in the summer of 2001.

United were reportedly offering £30million for his services, which would have set a new British transfer record. At this stage, Vieira had engaged and held his own in several battles with Old Trafford skipper Roy Keane. Ferguson's efforts to unite the two in Manchester were rebuffed by the Gunners, and Juan Sebastián Verón was instead signed in a £28.1million deal from Lazio, thus ensuring the Vieira-Keane rivalry continued to burn strongly.

Despite their era-defining wars on the pitch – which even spilled over into the tunnel ahead of a Highbury encounter in February 2005 – Keane holds the utmost respect for his long-time adversary. “Out of everybody I ever faced as a player,” the Irishman said, “he drove me to become better. Obviously Arsenal were the team that really challenged Manchester United and, for a short time, went past us.

And as their leader Patrick was immense. “Without doubt I’d put him alongside [Zinedine] Zidane, [Paul] Scholes, [Steven)]Gerrard and [Frank] Lampard as one of the very best I’ve ever played with or against, he was that good. On his day, when he was driving Arsenal on with the sheer force of his personality, he was unplayable.”

After the 2001/02 title win, Tony Adams retired and the Arsenal captain's armband was handed over to Vieira – there could have been no other candidate. No player better embodied the commitment demanded by fans while possessing the skill and intelligence required of an elite-level player.

Another title was claimed in 2004, but this one was different. Petit was gone and Vieira was now partnered in midfield with Brazilian World Cup winner Gilberto Silva. Silva's presence at the base of midfield helped ease Vieira's defensive workload and freed the Frenchman up to conduct play and create – a side of his game that never got the credit it deserved. 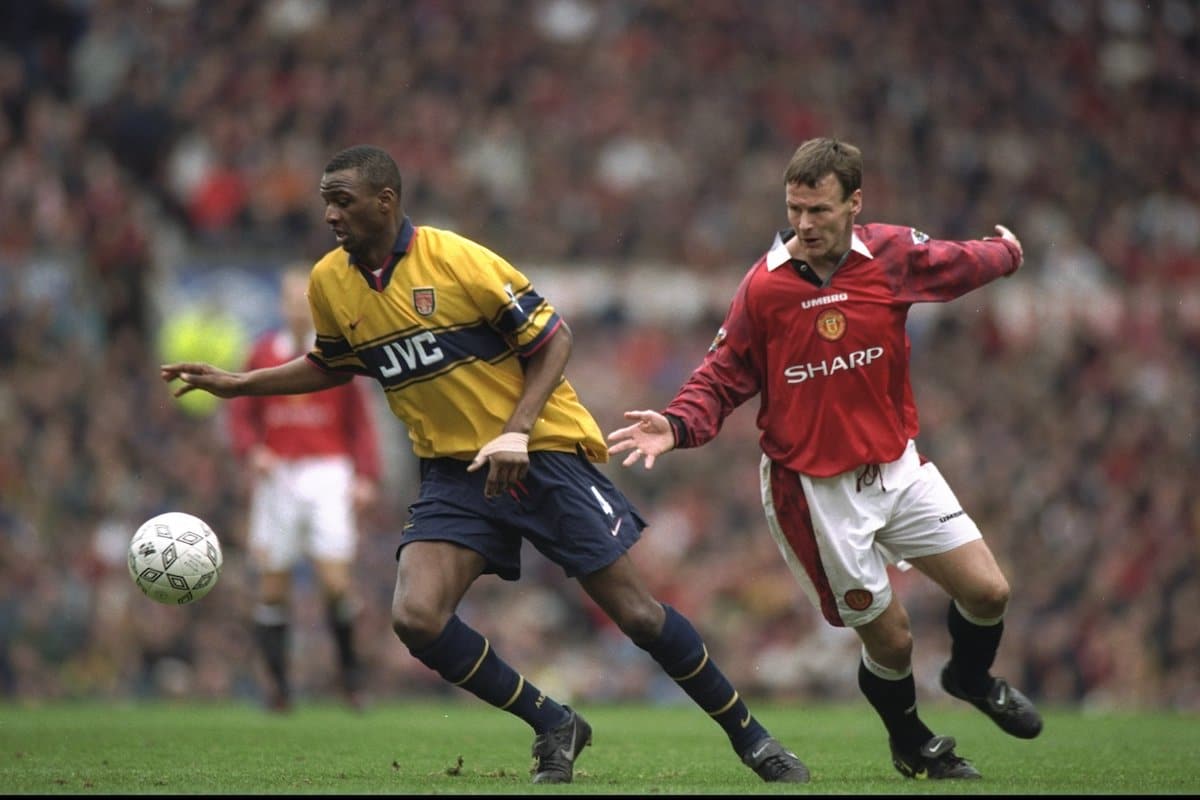 With their indomitable captain pulling the strings, Thierry Henry, Robert Pires and Freddy Ljungberg running riot in attack, Arsenal were unstoppable – literally. They became the first team in English football history to complete a 38-game top-flight season without tasting defeat. They were invincible.

Although the accolades were mostly reserved for Henry, the side's star striker and eye-catching goal-scorer, the ‘Invinclibles' would certainly not have come to be were it not for Vieira's immense influence. Indeed, former Manchester United goalkeeper Schmeichel has spoken of just how key to the Gunners the midfielder was during their pop under Wenger. “I used to look forward to playing him because he made every one of us raise our game,” Schmeichel said. “Arsenal had a great side, but I firmly believe without him they would’ve been 25 per cent weaker.”

After shunning advances from Manchester United, Chelsea and Real Madrid over the course of his time in north London, Vieira's Arsenal career came to an end in the summer of 2005, after nine glorious years. The veteran midfielder signed off in fitting style by netting the decisive penalty in an FA Cup final shootout against Ferguson's Red Devils at the Millennium Stadium.

He joined Juventus in an £18million deal, and would later go on to star for Inter Milan under José Mourinho, before returning to the Premier League in his mid-30s to add experience and leadership to a burgeoning Manchester City side in 2010, retiring after his single season at the Etihad.

At the San Siro, where he became Champions League winner for the first and only time his career, Vieira played alongside the enigmatic and egotistical Swedish centre-forward Zlatan Ibrahimović.

There are few players in world football Ibrahimović has ever held in the same esteem as himself, but Vieira was one of them “We both had that winners’ mindset… If anyone knew that, it was Patrick Vieira,” Ibrahimović said of the Arsenal legend. “He’s the type who gives 100 per cent in every situation, and I saw how he boosted the entire team. There aren’t many football players I have that kind of respect for.”

Synonymous with a golden era at Arsenal, and the key player in one of the greatest sides English football has ever seen, Vieira's legacy with the Gunners, and in the Premier League as a whole, is one of a revolutionary talent who redefined and transcended his central-midfield role.

In summing up what made Vieira so beloved on the red side of north London, Wenger put it best when he described his long-time captain as the “umbilical cord between the team and the fans”.