“And Solskjær has won it!” Clive Tyldesley's simple summation of one of the most dramatic moments in European football history still elicits a tingle down the spine of Manchester United fans.

Ole Gunnar Solskjær, the ‘Baby-faced Assasin', had just scored the winning goal in stoppage time of the 1999 Champion League final, little more than ten minutes after coming off the bench at the Camp Nou. The goal secured a historic Treble for the Red Devils, and earned Alex Ferguson, soon to be knighted, his first European Cup.

When he entered the field in the 81st minute, United were trailing Bayern Munich 1-0, unable to overturn Mario Basler's sixth-minute free-kick. But there was a quiet confidence within the travelling English support. The Premier League champions had shown their capacity to produce last-gasp comebacks many times in the preceding year, and Solskjær had already earned his ‘super sub' moniker, not least due to a four-goal ambushing of Nottingham Forest in 12 second-half minutes at the City Ground three months earlier.

With 90 minutes elapsed and stoppage time winding down, Teddy Sheringham‘s sweeping, close-range finish, redirecting a scuffed Ryan Giggs effort, pulled United level. Then, as extra time beckoned, Sheringham rose to flick on a David Beckham corner, and there, at the far post, right on cue, was Solskjær to instinctively flick out a right boot, volleying unopposed into Oliver Kahn's net to break German hearts and send the Camp Nou, Manchester, and every corner of the globe touched by United's marketing arm into raptures.

Although his now-iconic knee-slide celebration strained ligaments and cost him a couple of Norway caps, causing him to miss the post-season internationals, there is no regretting a millisecond of that game's closing sequence.

In an instant, Solskjær's cult-hero status at Old Trafford was cemented. To this day, his name is still sung regularly at the Theatre of Dreams, with several songs dedicated to the unassuming marksman: “You are my Solskjær … “, “Who put the ball in the Germans' net? … “, and “Late in May in 1999, Ole scored a goal in injury time … ” ring out the ditties in salutation of the Norwegian.

In the moments immediately after the final whistle in Barcelona, Solskjær has since admitted that his thoughts were not focussed on his own accomplishment and the accolades to be directed his way. No, he thought of Ferguson, swelling with pride after helping the great United gaffer finally get his hands on the Champions League trophy.

“I’ve got a picture of us together and I will always remember thinking at that moment: ‘You deserve this – you deserve so much to win the Champions League’,” he recalled in an interview with FourFourTwo last year. “We did it for him, as a manager. You almost well up when you think about it. He was that kind of manager.”

That empathy, that natural warmth and selflessness, sums up Solskjær as both player and man: never one to toot his own horn too brashly, and always viewing himself as a small yet vital cog in a much bigger machine. Although, he concedes Ferguson singling fellow substitute Sheringham out for a lengthy discussion on tactical instructions at half-time in the Champions League final irked him.

“I thought: ‘I’ve scored 17 goals for you this season, mostly coming on as sub – aren’t you going to speak to me?’ Then Teddy went on. That’s the way to trigger me; to make me feel: ‘I’m going to prove you wrong’”

With an impressive scoring record of 31 goals in 38 games for Molde  in the Norwegian top flight, Hamburg, Bayern Munich, Cagliari, PSV and Liverpool were all monitoring Solskjær's development in the mid-1990s, but it was United whose interest was firmest, lodging a successful £1.5million bid during Euro '96.

The then-23-year-old arrived at Old Trafford that summer to almost no fanfare. The Red Devils had hoped to sign Alan Shearer, England's goal-scoring hero of the European Championships on home soil, from Blackburn Rovers. But, despite having allegedly assured Ferguson he'd join United, the prolific No.9 instead signed for hometown club Newcastle United in a world-record £15million deal. 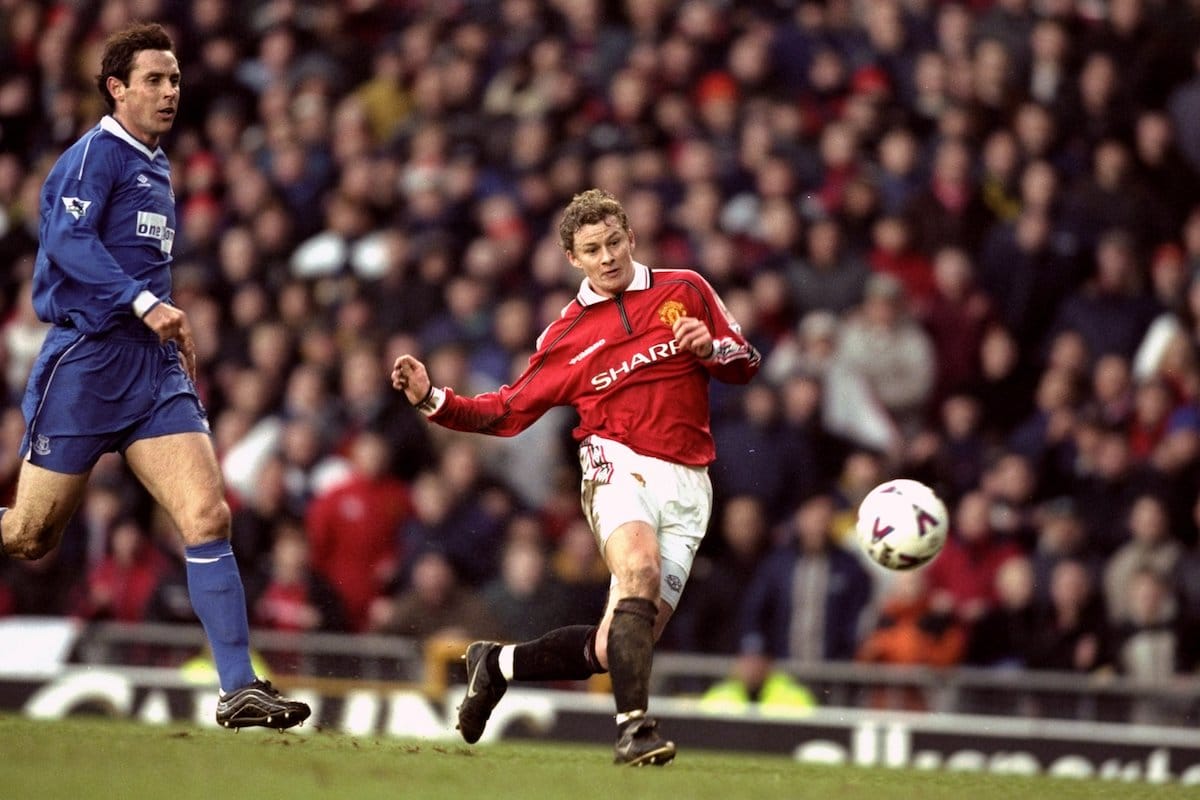 At the time, coverage of European leagues in the UK pretty much began and ended with Channel Four's Football Italia, providing a weekly game and highlights packages from Serie A, which was the most glamorous league in the world during that period. But the days of widespread internet access, player-specific compilation videos and niche coverage of any of Europe's footballing outposts were a long way off. As such, you'd be hard pressed to find a United supporter who could pick Solskjær out of a line-up, let alone one excited at his arrival.

Moreover, costing a tenth of what Newcastle had forked out for Shearer, Solskjær was seen as a cheap alternative, with United too frugal to splurge for a more proven plan B – be it a Gabriel Batistuta or a Patrick Kluivert. All of this would have weighed heavy on a player less laid back than the horizontally-disposed Norwegian, who had supreme confidence in his ability and his readiness for the biggest stage.

“The gaffer said: ‘For the first six months, play in the reserves and get used to England, then from January we might try to get you into the first team.'” Solskjær remembers. “But I scored two in my first reserves game, Andy Cole got injured and we needed strikers. I came on and scored six minutes into my debut against Blackburn.

“I knew I’d score goals at United. I’d always been clinical finishing chances. As a youngster on the playground, even if there was no keeper I would always shoot just inside the posts, because no goalkeeper would save it.” 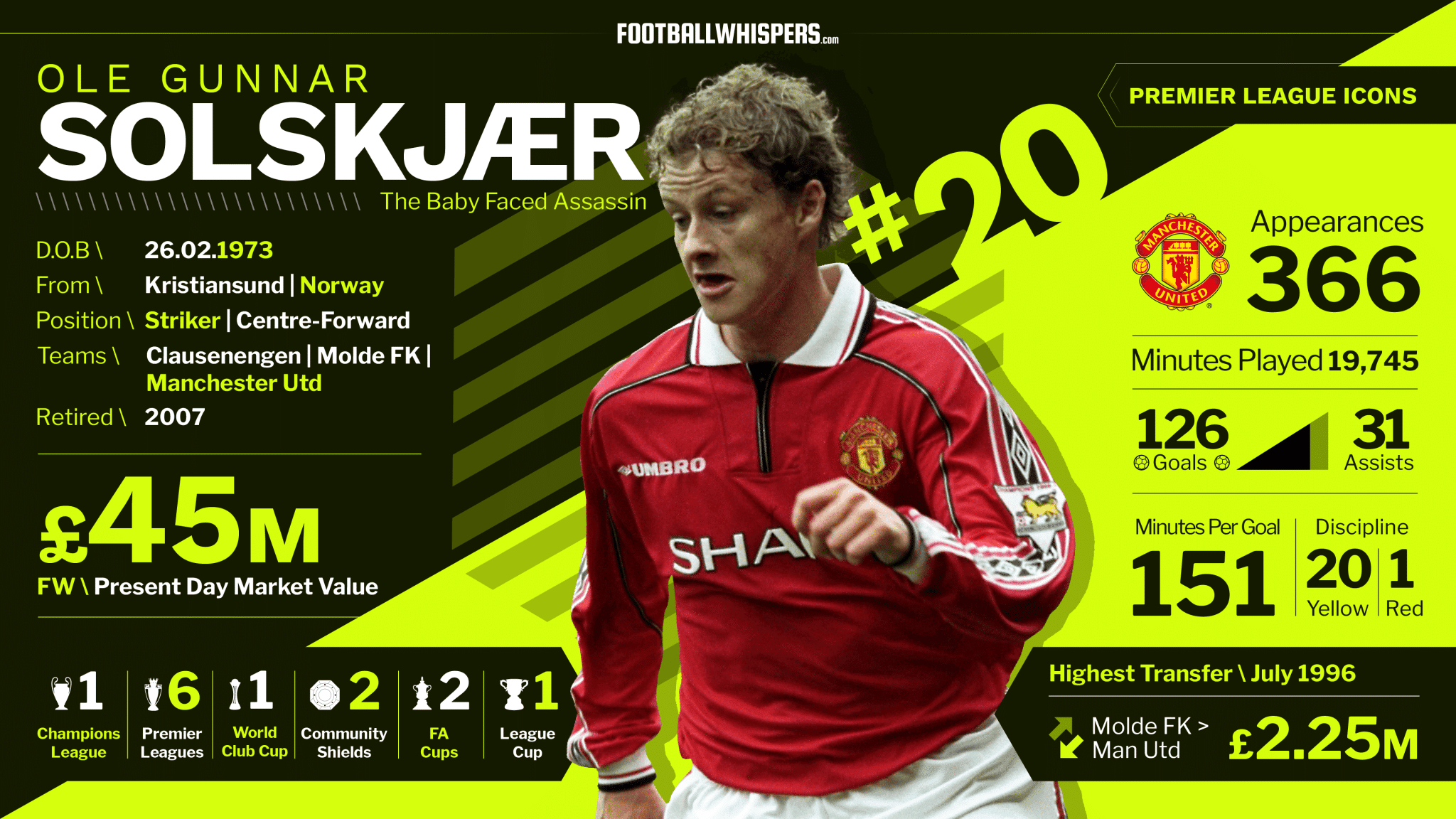 And score goals he did, 19 of them, in fact, in his first season, making him the club's top scorer for 1996/97, despite the presence of record signing Cole and the totemic Eric Cantona. By the end of his third campaign at Old Trafford, Solskjær had racked up 46 goals in 113 appearances for the Manchester side.

However, the arrival of Dwight Yorke, coming in from Aston Villa for £12.6million, almost squeezed Solskjær out the Old Trafford exit door in the summer of 1998. Cantona had retired by this point, but Ferguson's attacking options were stacked, with Yorke joining Cole, Sheringham – signed from Tottenham Hotspur the year before – Solskjær and Jordi Cruyff. With an offer on the table for the Norwegian, and one that would see the club turn a healthy profit on him at that, it appeared his United story had reached its final chapter.

“Martin Edwards and Alan Sugar had agreed a fee – £5.5million, I think,” Solskjær told FourFourTwo. “But the gaffer called me into his office and said: ‘I don’t really want to sell you because if you stay here you’ll play enough football.' That was enough for me. I didn’t want to go; my agent did. He said he had never met a person as stubborn as me. But I was right. I normally am!”

Had Ferguson allowed Solskjær to leave, who knows whether his side would have had the requisite strength in depth to record a league, cup and Champions League treble that season. But football would certainly have been robbed of moments like his clinical left-footed winner against Liverpool in the dying embers of an FA Cup tie, his quadruple at Forest and, of course, that magical night in Barcelona.

Solskjær ended up staying for the best part of another decade, calling time on his career in 2007, having scored 126 goals for United – at an impressive rate of one every 153 minutes in the Premier League – endured and bounced back from serious injuries, displaced Beckham on the right flank for a period, took his trophy collection with the club to ten major honours, and survived three generations of Ferguson's breaking down and rebuilding of his side.

Ask anyone to name Solskjær's defining characteristic and, almost to a person, the reply will be: ‘his finishing'. The former Molde man was lethal inside the penalty area, with either foot and from any angle. But what truly set him apart was his intelligence. Many observers, Ferguson included, noted that his success in impacting games from the bench came from studiously watching proceedings before he came on, spotting chinks in the opposition's armour and exploiting them.

For his humility, work ethic, team spirit and unquestionable contribution to United's most successful ever era, Solskjær remains adored inside Old Trafford, and, perhaps more than any Red Devils in recent memory, respected outside the Theatre of Dreams.