Moving to a new club to fill the boots of a departed legend, adored by fans and lionised for their starring role in major successes, is never easy. When the exiting hero is Roy Keane, the long-time captain and midfield driving force behind more than decade of dominance at Manchester United, the task is nigh-on impossible.

That's the situation Michael Carrick found himself in when he joined the Red Devils in a deal which, after conditional bonuses, would cost the Old Trafford club £18.6million.

Keane had left under a cloud less than a year earlier, jettisoned by Sir Alex Ferguson for criticism of his team-mates deemed unbroadcastable on the club's in-house television station, MUTV. However, few United fans would have disagreed with the Republic of Ireland midfielder's assessment of his colleagues following an embarrassing 4-1 defeat to Middlesbrough in November 2005. While his name was mud with Ferguson, Keane remained revered inside Old Trafford.

When it emerged United were targeting Tottenham Hotspur playmaker Carrick to not only take Keane's position at the base of midfield, but also his No.16 jersey, eyebrows were raised. While unquestionably a gifted technician, many felt the Wallsend native lacked the authority of the Irishman, viewing him soft by comparison.

Carrick broke through at senior level at West Ham United as part of a gifted generation of players at Upton Park which included Joe Cole, Jermain Defoe and future United team-mate Rio Ferdinand. But he had also been unable to prevent the Hammers from dropping out of the Premier League in 2002/03. 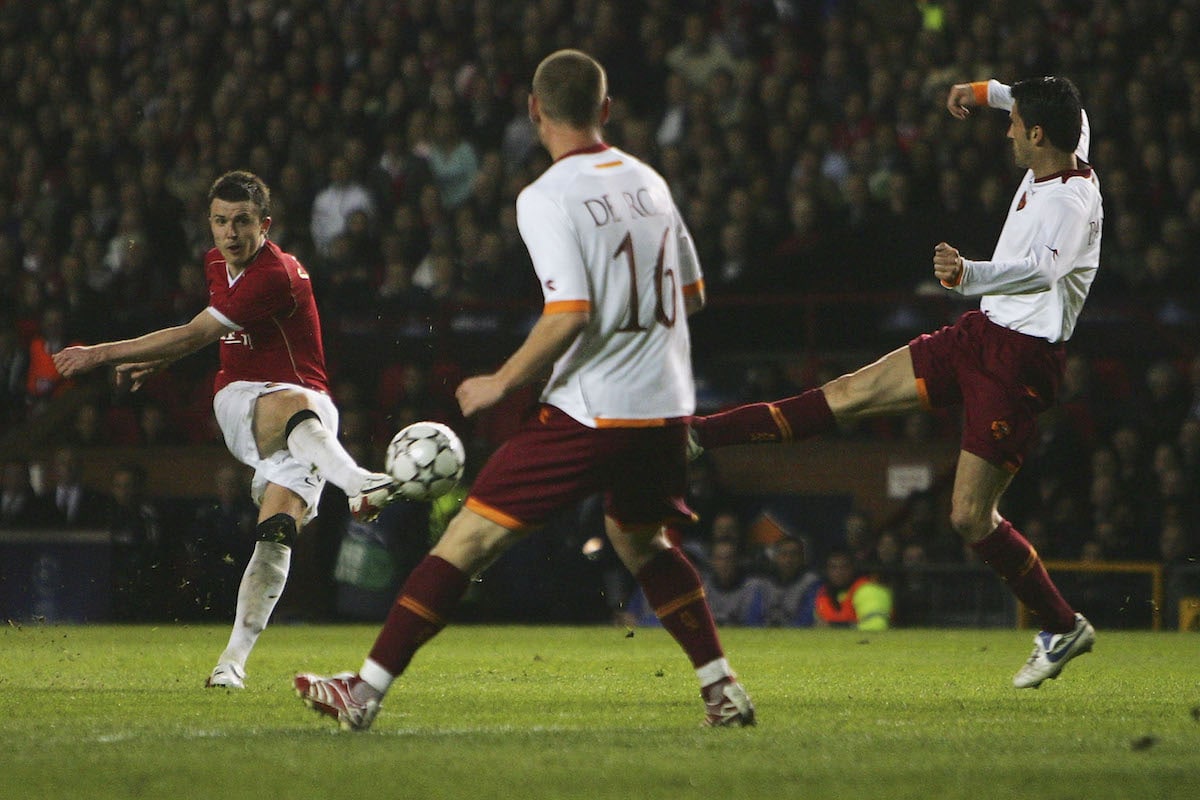 Despite this setback, former West Ham manager Harry Redknapp never doubted Carrick's abilities, remembering early signs of the United star's immense promise: “I loaned him out to Swindon, and I remember getting a call one night from John Francome – the champion jockey who was a big Swindon fan – and he said, ‘Harry, Michael Carrick is the best player I’ve seen in years. This Carrick you’ve loaned out is the nearest thing I’ve seen to Glenn Hoddle.'”

After one season in the second tier, with West Ham unable to bounce straight back up, he joined Spurs for just £3.5million in the summer of 2004. Two years on, few United fans could comprehend why their club appeared ready to splash more than five times that figure on the England international.

Ferguson, too, appeared to undervalue Carrick to some extent. Once the Spurs man had been identified as a Manchester United transfer target, when asked by CEO David Gill how much the club should expect to spend on the deal, the Scottish boss set the bar at around the £8million mark.

“We had watched Michael playing against Arsenal at the end of the season and Martin [Ferguson, the manager's brother and a trusted scout at the club] told me, ‘He's definitely a Manchester United player,'” the then-United boss wrote in My Autobiography. And as Tottenham chairman Daniel Levy drove a typically hard bargain, the Red Devils were convinced to pay more than double Ferguson's initial valuation, making Carrick the fifth-most expensive signing in the club's history at the time. But they would not regret it.

By the end of his first season at Old Trafford, 2006/07, United had ended a four-year title drought, the first of three Premier League triumphs in succession and part of five in the space of seven years. The ex-Hammer played at least 40 games in all competitions in each of his first eight seasons with United.

He was also a mainstay of some glittering continental campaigns, helping United reach the Champions League final three times, winning once thanks to a penalty shootout victory over Chelsea in the 2007/08 season.

That year, United were arguably at their strongest of the Ferguson era. Much of the focus was on the superlative frontline of Cristiano Ronaldo, Wayne Rooney and Carlos Tevez, whose fluid interplay regularly shred through top-class opposition. But Carrick was also vital.

The Red Devils midfield was a mix of slowing veterans, such as Ryan Giggs and Paul Scholes, and younger, developing players, like Anderson and Darren Fletcher. The former Spurs man was the exception, entering his peak at 26 and, although not a chest-beating leader in the traditional Roy Keane sense, his game had grown a real authority, leading by example by exuding calm and consistently making sound choices with and without the ball.

A 7-1 Champions League quarter-final victory over Roma in 2006/07, in which he netted a rare brace with two rasping strikes from distance, is perhaps his most memorable continental display. And the Italian press were bowled over by his controlling presence in a 0-0 draw with Inter Milan at the San Siro in 2009, with La Reppublica labelling the Englishman “un magnifico Carrick”.

“Carras makes the game look easy,” winger Ashley Young says of his long-time team-mate. “His passing range, his communication and his leadership – he’s fantastic . . . He’s the pass master, and how he’s not a mainstay of the England side, I’ll never know!” Young's frustration at Carrick's lack of international recognition is understandable – the central midfielder only has 34 caps to his name. Indeed, between 2006 and 2009, when he was arguably at his peak, he played just nine times for the Three Lions. 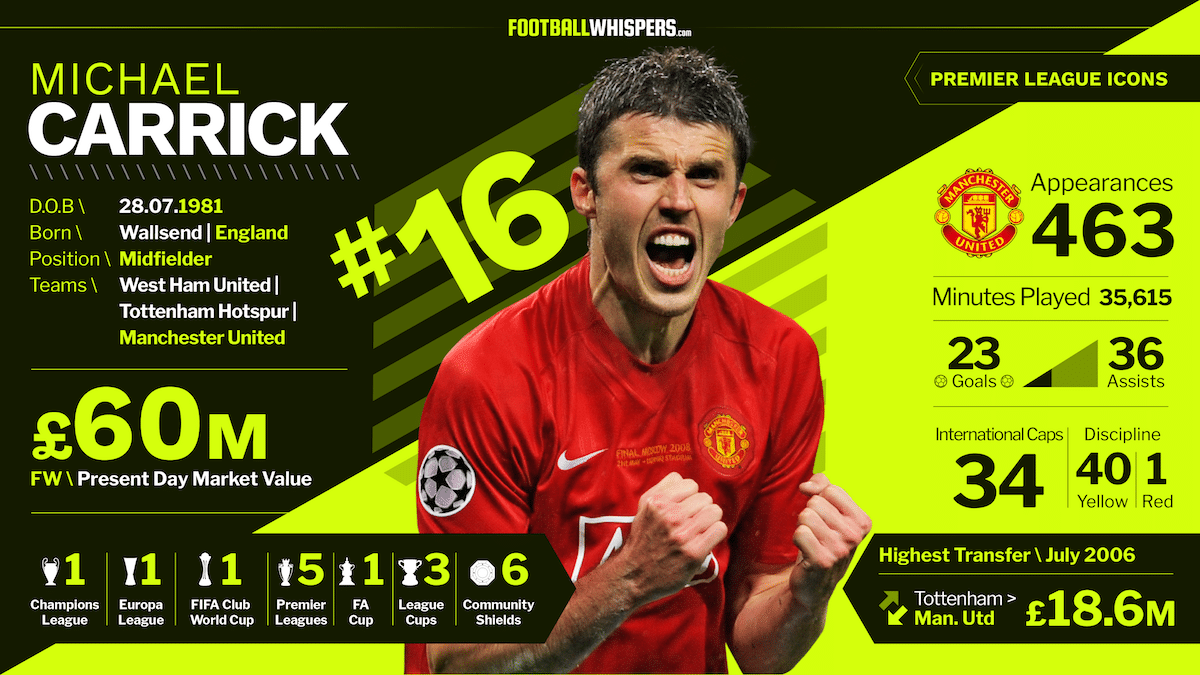 Obviously lacking in athleticism, never able to cover every blade of grass or burst forward to score like Steven Gerrard or Frank Lampard, who were viewed as his positional rivals for England for many years, Carrick's style went largely unappreciated in his homeland. In Europe, however, where a more considered approach to possession is prized, he is held in much higher regard.

“He is one of the best holding midfielders I’ve ever seen in my life by far,” remarked one Josep Guardiola on news of the Englishman's plan to retire at the end of the 2017/18 season. “He’s the level of Xabi Alonso, Sergio Busquets in Barcelona and Munich.” The Manchester City manager, having set the tempo for Johan Cruyff's influential Barcelona ‘Dream Team', knows a thing or two about deep-lying playmakers.

Ferguson has always been forthright in hailing Carrick's propensity for looking to play the ball forward at every opportunity as his greatest strength. And the now-retired United boss believes the No.16's best season was the 2012/13 title triumph, the Red Devils' last league success to date. At 31, he was able to blend experience with the excellent technique he's always possessed, largely unencumbered by the injuries and health concerns – it was discovered he has a minor heart complaint in his final season at Old Trafford – that interrupted the latter years of his career.

Even when his body began to dictate that two games a week would no longer be a possibility, Carrick's influence remained precious. Paul Pogba, an £89million arrival from Juventus in the summer of 2016, for one, has spoken of the support the veteran midfielder offered.

“I listen to his advice,” Pogba said in September 2017. “Every time, before a game, he comes to talk to me and he will ask me things and keep me calm. He is a mentor to me and someone I look up to.”

Hanging up his boots to take up a role on José Mourinho's coaching staff ahead of the 2018/19 season, Carrick's knowhow and experience will continue to be an asset relied upon at Old Trafford.

Remembering his glittering playing career, laden with every possible honour at club level, it can only he hoped that he will someday be afforded the appropriate recognition.

Despite five Premier League winners' medals, he was only named in the Team of the Year once. And, while his team-mates valued him greatly, voting him Manchester United Players' Player of the Year in 2012/13, wider acclaim never came.

It would be hyperbole to suggest that he was ever United's most gifted player, or worthy of Ballon d'Or contention. But it's difficult to think of a player who has been as crucial to a club's dynastic success as Carrick, while also remaining as overlooked and under-appreciated.