The extraordinary, 16-year top-flight career of Matt Le Tissier tends to be framed in one of two ways: it can be viewed as an admirable tale of loyalty through adversity, sticking with struggling Southampton despite siren calls from some of the newly-formed Premier League's brighter lights; or it is a story of one of the most gifted players of his generation destined never to reach the heights his talent warranted.

But there is a third, more accurate way to characterise Le Tissier's football career, encapsulating his commitment to the Saints' cause as a one-club man, while allowing a nod to thoughts of what could've been had he gone elsewhere.

That is that the Guernsey-born playmaker's remarkable, unique time in the game was a story of incredible success, only with different parameters – almost single-handedly elevating a team of meagre means to sustained stability. And of a player prizing familiarity, fulfilling his own ambitions and forging an unbreakable bond with a fan base above money and medals.

“Yes, I knew I probably wouldn't win any honours, but when you're at a club that size, staying in the Premier League for 16 years gave me as much pleasure as winning a medal if I'd gone somewhere else. No one expected us to stay up there for that long. I was so chuffed to be a part of that.”

As well he should've been, too. Southampton have become a progressive, forward-thinking, thoroughly modern club in recent years, with one of the most productive youth academies in England and boasting a coherent, organised network of influencers who have kept the club moving forward despite a high turnover of players and managers. But that was far from the case in Le Tissier's day.

Le Tissier made his Southampton debut in the 1986/87 season, before the formation of the Premier League and with the Saints a middling First Division team at best, and at worst a side who clung to their top-flight status desperately on several occasions over the next decade.

Southampton finished 12th in Le Tissier's maiden campaign as a first-team player; with his influence growing each year, the young attacker lifted the South Coast club to seventh in 1989/90 – their highest finish in five years – scoring 20 goals and being crowned PFA Young Player of the Year.

His form that season wasn't enough to earn him a place in Bobby Robson's England squad for the 1990 World Cup in Italy, but it did pique Tottenham Hotspur‘s interest. Growing up on a council estate in Guernsey, Le Tissier's humble upbringing didn't offer much luxury, but his parents always ensured he and his three brothers had football boots, and he would wile away the hours attempting to emulate the nonchalant skills of his idol, Spurs legend Glenn Hoddle.

As such, the move to White Hart Lane appealed to the 21-year-old Le Tissier, offering him the chance to link up with England No.9 Gary Lineker and represent the club he supported in his youth. “It was pretty much a done deal,” he said of the potential move. “I’d agreed terms on the contract and everything. But I pulled out of it because I was about to get married and my fiancée at the time didn’t fancy living in London.” And that was that.

Le Tissier remained at Southampton and never agitated for a move away – despite later interest from Chelsea – never feeling confined by the cramped surrounds of the 15,000-capacity Dell, and never seeking the bright lights and riches that the Premier League, formed in 1992, brought many clubs. The highest weekly wage packet he ever earned was £3,500, which seems a comparatively miserly income for one of the most talented individuals in what was quickly becoming the most lucrative league in the world, but money was some way down Le Tissier's list of priorities.

Being happy, playing to the best of his ability and carving out a legacy for himself was far more important, and that's exactly what he did throughout the 1990s. Goal after spectacular goal thrilled the Saints fans who packed into The Dell, all of whom dearly cherished the mercurial brilliance of their best-ever player.

There was his sublime hat-trick against Norwich City in 1990 – illuminated by a magnificent dribble and laser-guided 20-yard finish for its second strike – the slalom run and 35-yard curler against Blackburn which was named Goal of the Season in 1995, and the incredible feat of ball-juggling and calm, side-footed finish against Newcastle United. 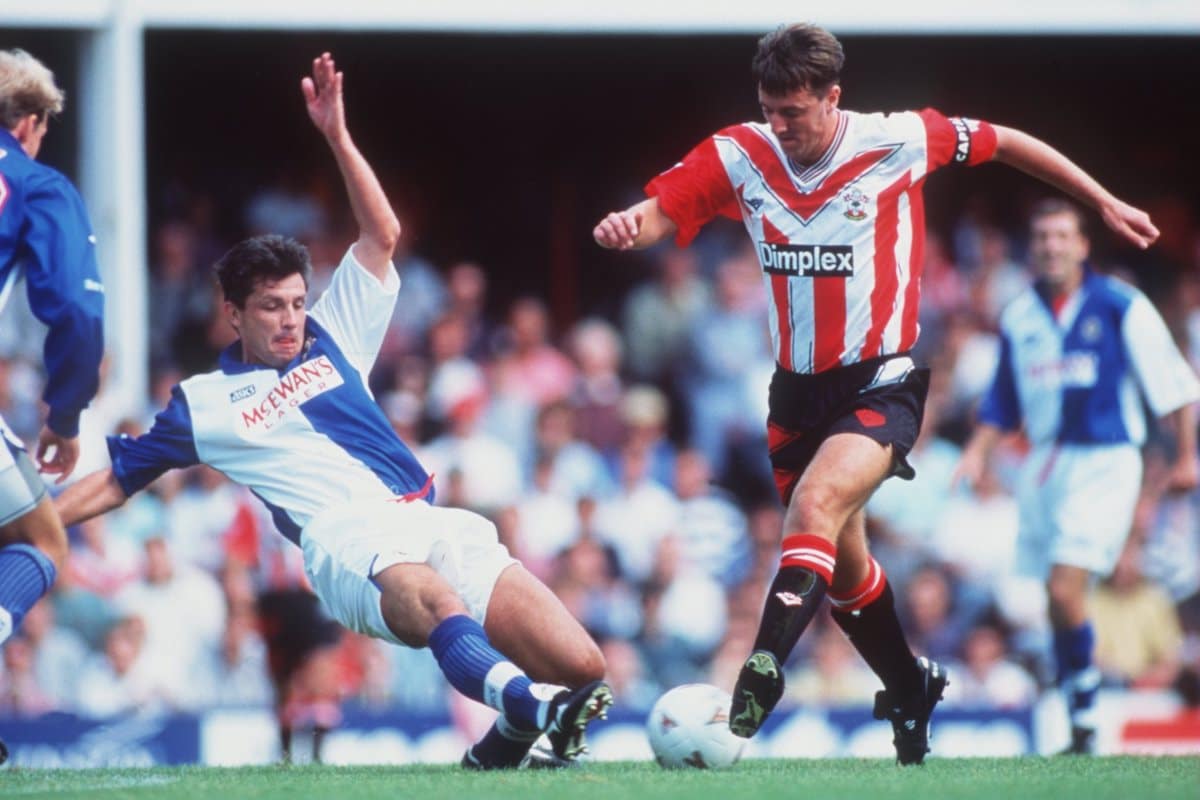 So prolific a scorer of great goals was Le Tissier that innumerable stunners – like the exquisite chip that rendered Peter Schmeichel a helpless spectator against Manchester United, and the flick-up-and-volley set-piece routine against Wimbledon – goals that would be career highlights for most mere mortal top-level pros, don't even crack his top five.

Stylistically, Le Tissier was a classic No.10; at his best when operating behind a striker and with freedom to roam. He was never blessed with tremendous pace, yet was an incredible dribbler thanks to his immaculate close control and awareness. He had the vision to scythe opposing defences apart, the technique to find the top corner from anywhere within eye-sight of goal and, crucially, the will to entertain, to craft aesthetic beauty at every opportunity.

Le Tissier's magic and showmanship was winning him fans far beyond the confines of The Dell, too. Barcelona legend Xavi remembers being inspired by highlights of the former England creator as an impressionable youngster with ambitions of a future in the game.

“In Catalonia there used to be a half-hour programme every Monday where they'd show the best goals from the Premier League,” the 37-year-old said in an interview last year. “Every week, Matt Le Tissier would be on the show. I'm talking outrageous, sickening goals.

“Straight in the top corner, left-foot flick and then right over a defender and score against Newcastle. We used to say: ‘This guy, Le Tissier, is outrageous and he never goes to a big team. He stays at Southampton. It's incredible. He could play for anyone.’ Our whole house was obsessed with him.”

Le Tissier's mid-'90s pomp, scoring a combined 55 goals in the 1993/94 and 1994/95 season, coincided with him falling under the auspices of Alan Ball, the manager he most enjoyed working with of the nine who manned the Saints' dugout during his career. 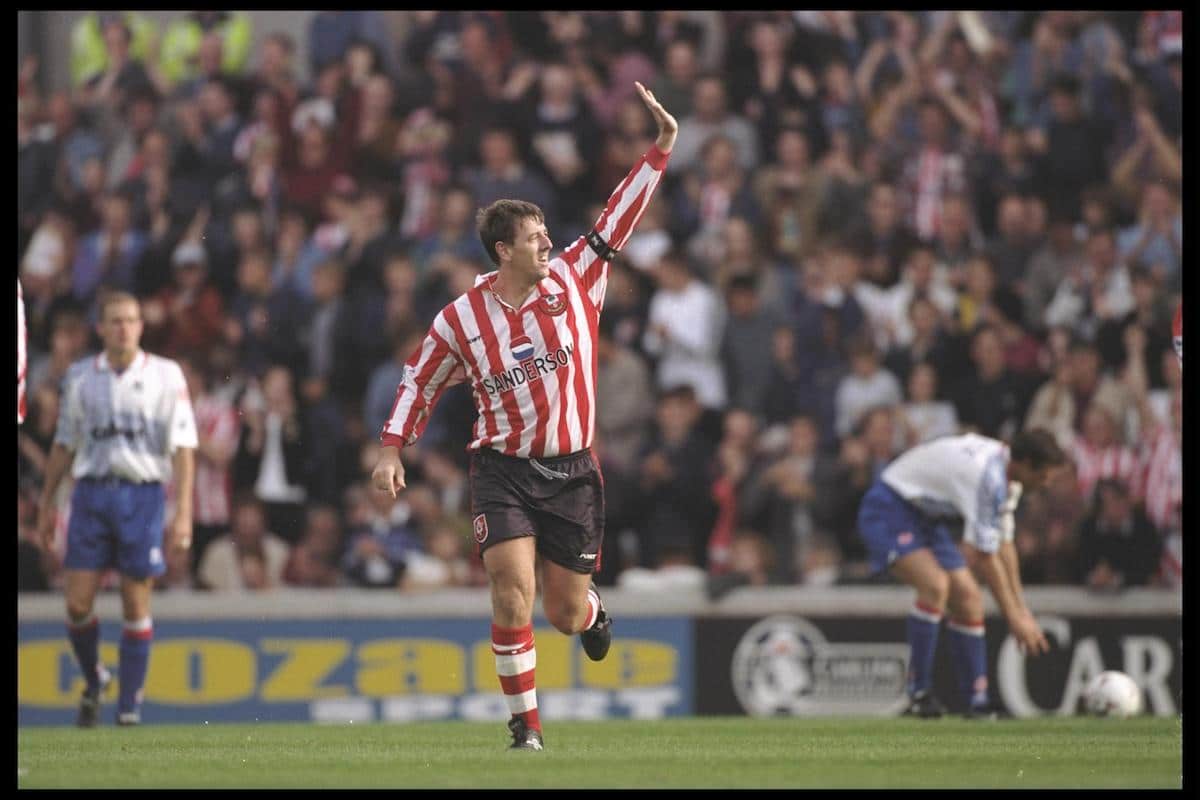 Ball, a World Cup winner with England in his playing days, was brought in in January 1994 with the club in dire straights, looking a near certainty to be relegated. The former Exeter boss, recognising the asset he had at his disposal, gathered the Southampton players on his first day of training and left them in no doubt over who was their best and most important player, instructing them to pass to Le Tissier as often as possible, and allowing the playmaker freedom to roam and wreak havoc.

It was a simple plan but one that reaped dividends for Ball and Le Tissier. The player repaid his manager's faith with six goals in the new boss' first four games in charge – including a hat-trick against Liverpool – and 15 from 16 appearances in the second half of 1993/94, firing Southampton to safety.

“Bally let me get away with a lot more than the other players,” Le Tissier told FourFourTwo. “There were players who didn't like him but if you weren't producing Bally would get on your back. It would have been the same with me.”

The biggest regret of Le Tissier's career, if not for him then for those who witnessed and appreciated his gifts, was that he accumulated just eight senior England caps. The Three Lions were blessed with some fantastic forwards during the Southampton legend's time – such as Alan Shearer, Teddy Sheringham, Robbie Fowler, Ian Wright and more – but it's almost criminal that a player of Le Tissier's ability didn't receive greater international recognition.

Coming from the Channel Islands, he could've elected to represent any of the Home Nations, but he only ever dreamed of playing for England, and pleas from Gérard Houllier for Le Tissier to consider pledging allegiance to France fell on deaf ears, not least because, despite his exotic surname, he wasn't eligible.

The biggest slight of his England career came in the build-up to the 1998 World Cup in France, when he was selected as part of an England “B team” to face Russia at Loftus Road, in which he lined up alongside such memorable names as Carl Serrant, John Curtis and Darren Williams.

The game was arranged so then-England boss Glenn Hoddle could cast his eye over some of the fringe players vying for selection for the upcoming World Cup, but it was hardly seen as a vote of confidence being picked for the second string, with Chris Sutton refusing to play because he “doesn't do rehearsals”.

In an interview for the Quickly Kevin; Will He Score? podcast earlier this year, Le Tissier admitted that his performance against Russia had raised his hopes of being picked for at least the provisional England squad: “I knew that there was going to be World Cup squad of 30 announced that would be going to La Manga, and then it would be trimmed down to 23 from there. I thought after that, I’ve got a chance of getting in that 30 now.”

But, alas, he did not sufficiently impress Hoddle, who left the stadium before the star man had completed his treble. The former Spurs playmaker would go on to manage Southampton, Le Tissier later describing him as “one of the most stubborn and arrogant men I’ve ever met” in an interview with TheHardTackle.com – some truth to the credo that you should never meet your heroes, perhaps.

The experience of an international tournament would undoubtedly have been a crowning moment in Le Tissier's career, but his playing days were littered with highlights. And there was none more fitting than his spinning half-volley into the top corner against Arsenal in May 2001. It was the last goal ever scored at the Dell, with Southampton set to move to the newly-built St Mary's the next season; there could be no more deserving a scorer than the greatest player ever to call the small, oddly-shaped ground home.

The following campaign would be his last in professional football. Hampered by injuries, he was forced to admit that his time at the top had passed, after 540 games and 209 goals – many of which were breath-taking.

A cult hero; a saint among Saints; one of the most talented players of his time and a maverick entertainer; a one-club man. Matt Le Tissier is a Premier League icon.