It's not uncommon for a relatively unheralded signing to defy expectations, for a new arrival catch everyone off guard and shine in a way few expected.

Luis Suárez's Trojan horse entry into the Premier League in January 2011 is one of the more intriguing transfer tales of recent times.

Liverpool had just sold Fernando Torres to Chelsea for £50million. And, although the Spaniard had been struggling for form – as he would continue to at Stamford Bridge – and the fee, at the time, was astronomical, he was a fan-favourite one of the team's standout stars.

The Reds had to act quickly to not only replace the outgoing centre-forward on the pitch, but to soften the PR blow of losing a top player too.

Suárez, who'd scored 49 goals in 48 games for Ajax the season before, was signed for a club-record £22.8million, only for Liverpool to smash that record hours later by paying £35million for Newcastle United‘s Andy Carroll.

While few who had seen his performances for Ajax and Uruguay were in any doubt over which of the two signings was potentially the more impactful, those already enlightened to the South American's gifts were, however, just that – few.

The latter deal, being one made between two Premier League clubs, for a young English player and involving a record-breaking fee, dominated column inches and drove discourse. the Uruguay international slipped into the Premier League almost unnoticed.

He wouldn't stay unnoticed for long, though – for better or worse.

A debut goal against Stoke City, coming on as a second-half substitute to net in front of the Kop and seal a 2-0 victory, saw Suárez settle quickly into life in the Premier League. His four goals in 13 games at the end of the 2010/11 season didn't do his performances justice, with the striker often excelling in all areas only to lack a clinical touch when the moment called, something he would soon overcome.

While Carroll struggled, Suárez shone. The Uruguayan helped Liverpool rise up the table to finish sixth under Kenny Dalglish, having dropped as low as 12th by mid-January.

Initially, while the goals didn't flow at any kind of exceptional rate – he netted just 11 league goals in his first full season at Anfield – impressing through his individual skill, game intelligence and undying work rate. In his autobiography, Crossing the Line, he would later describe himself as the type of player “who will kill himself just to prevent a throw-in in the 90th minute,” and that level of commitment was what set him apart.

Throughout his career, which started with Nacional in his homeland before a spell in the Eredivisie with Groningen and then Ajax, Suárez has played with a fire in his belly, an aggression that has overspilled at times. His brainless bite of Branislav Ivanović's arm in a 2-2 draw with Chelsea in April 2013 landed him with a ten-match ban.

It was the second biting incident of his career, having committed a similar offence in Holland. And he would famously repeat the act during the 2014 World Cup, when his bite on Italian defender Giorgio Chiellini's shoulder saw him slapped with a fourth-month global suspension.

That ban meant, following his £75million summer switch to Barcelona, he was unable to make his debut for the Catalan giants until late-October.

While most observers were outraged by Suárez's behaviour, the player himself has maintained the reaction to his biting indiscretions was overblown. “I know biting appalls a lot of people, but it's relatively harmless,” he said. “Punch someone and it's forgotten, there is no circus.”

The Ivanović bite, combined with the much more serious issue of racial abuse allegations levelled his way by Manchester United defender Patrice Evra – for which he was found guilty by the FA and banned for eight games and fined £40,000 – meant he had become one of the most divisive figures in English football.

His performances on the pitch however, outlined his world-class talent, ensuring his disciplinary issues would not alone colour his Premier League career. 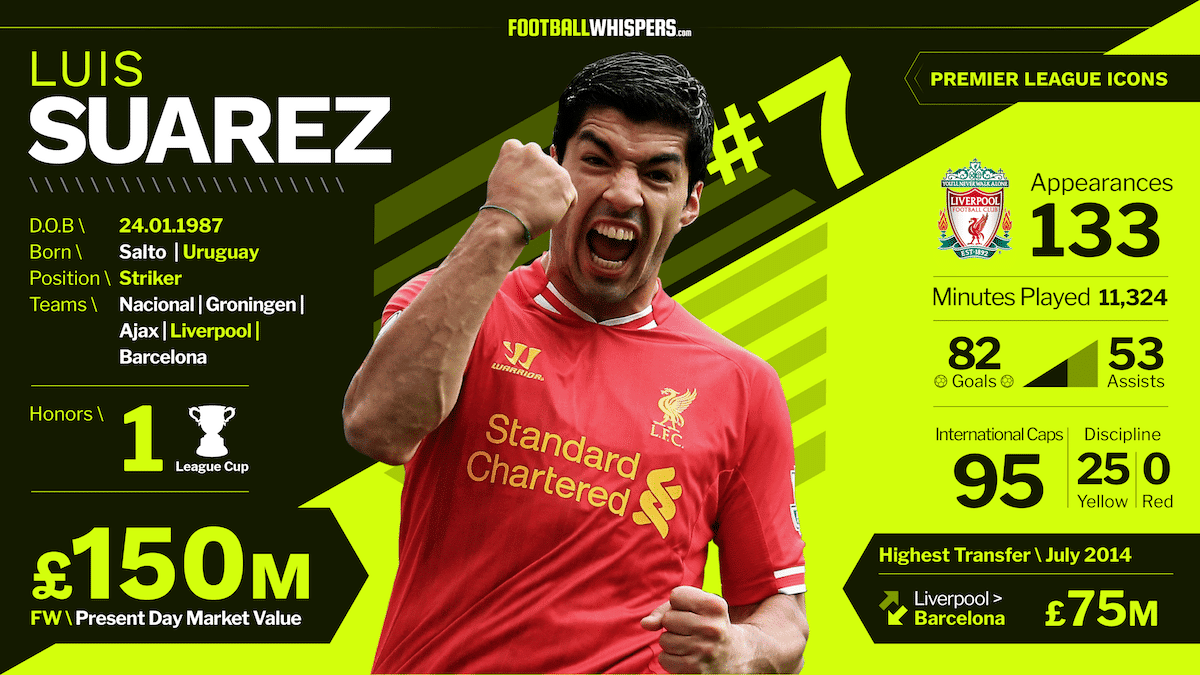 In his second full season, with Brendan Rodgers now in charge of the Reds, Suárez marked himself out as one of the finest strikers in Europe by smashing in 30 goals in 44 appearances. By this point, the striker's stellar form was outshining his colleagues, with Liverpool finishing seventh.

Craving Champions League football, he began to get itchy feet at Anfield. Arsenal, who believed the player's contact to include a clause meaning any bid above £40million had to be accepted, offered one pound over that mark. Liverpool refuted the existence of any such clause, causing a rift with Suárez that seemed irreparable.

Fortunately for the Merseysiders, the Uruguayan was talked round after captain Steven Gerrard assured him that another season like the one he'd just had and, rather than Arsenal, the likes of Real Madrid and Barcelona would be chasing him. Gerrard's words proved prophetic; the then 26-year-old was convinced to stay for one more year – and what a year it was.

Although Liverpool ultimately came up short in their pursuit of a first top-flight title in a quarter of a century, Suárez produced arguably the best individual season of any player in the Premier League era. In a glittering campaign, partnered in attack by Daniel Sturridge and supported by Raheem Sterling, the No.9 was the figurehead of the most exciting trio in the country.

With 31 league goals, the South American equalled Alan Shearer and Cristiano Ronaldo's high-mark for a 38-game season in the English top flight, while his 12 assists showcased what a committed team player he was. 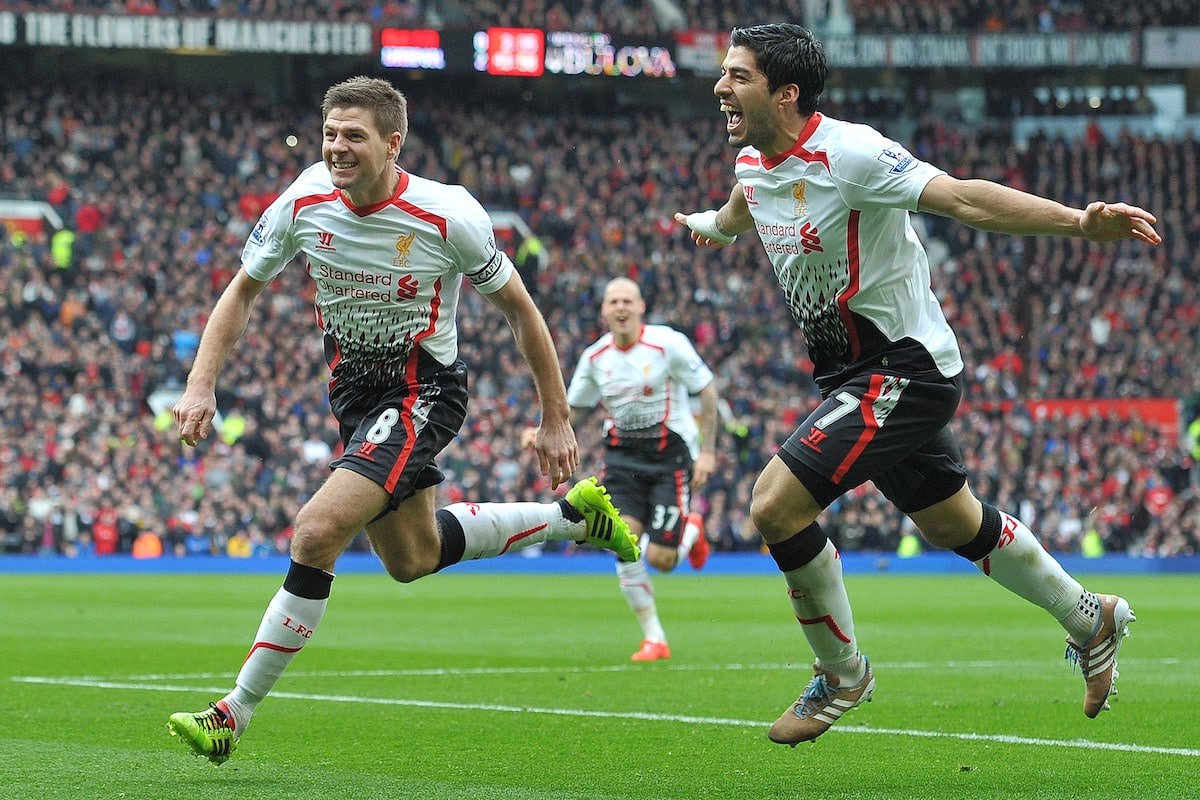 “He ran and pressed and fought for the ball and ran again – all while producing extraordinary moves and sublime goals,” Gerrard wrote of Suárez in My Story, the former Liverpool skipper's autobiography.

“There was a sustained period where playing with Luis was like being under a magical spell. He blew me away with his talent.”

As a team, Liverpool came up just short, with Chelsea piping them to top spot, but the forward swept up the individual gongs that season, named PFA Players' Player of the Year and FWA Footballer of the Year, winning over the masses who had previously regarded him as Public Enemy No.1

“You just can’t believe how quickly things happen in football and the way life turns,” he told former team-mate Jamie Carragher in an interview for the Daily Mail.

“I went from being the bad guy, the worst player who gets all the criticism, to being the player who makes the difference and scores the important goals.”

As Gerrard had predicted, Barcelona wanted to sign Suárez in the summer of 2014. The striker had a personal connection with the Catalan club. As a 16-year-old, his childhood sweetheart, and now his wife, Sofi, moved from Uruguay to Barcelona with her family. After travelling to visit her in and sneaking into the Camp Nou to take pictures together, he vowed to return, dreaming of representing the Balugrana. As such, he was never going to resist when Barça came calling.

Suárez does, however, maintain a strong emotional connection with Liverpool, insisting he would never consider playing for any other Premier League side.

Reflecting on his time in England, the 31-year-old is hopeful his incredible displays will dominate memories of his Anfield stay: “I know that they will remember the bad things that I have done and I can’t change that but I want to be remembered for the good things.”

Considered one of Liverpool‘s five greatest ever players by Carragher, Suárez also left an indelible impression on Gerrard, the player many consider to be the Reds all-time best, who reflects upon his time playing alongside the Barcelona superstar with vivid wonder:

“In training, and in matches, Luis proved again and again that he was at a different level from everyone else. I tried harder than ever to match him – but Luis was a better player than me.”