They may have fallen on hard times in recent years, languishing below the top tier since early-Millennium financial impudence sent them spiralling towards a 2003 relegation from the Premier League, but Leeds United remain one of English football's grandest institutions.

At the West Yorkshire club, tradition is cherished and the legends of the past are revered; the men in white stand on the shoulders of the giants who came before them. And, as such, it is no mean feat for a player to add their name to the pantheon of Leeds greats.

Any player hopeful of going so must first capture the fans' hearts through endeavour, discipline and commitment, before their capturing their imagination. This is exactly what Lucas Radebe achieved after arriving at Elland Road in 1994.

The smooth yet commanding South African centre-back struggled to make an impact initially, kept out of the side by injuries and a rocky relationship with manager Howard Wilkinson. Leaving South Africa for the first time in his life to move to Yorkshire, a county he'd never ever heard of, was a culture shock, too – “Winter in South Africa is warmer than summer in England,” he'd later remark –so a period of adaptation was to be expected.

But Wilkinson was replaced by George Graham early in the 1996/97 season, and Radebe began to flourish as the bedrock of the Leeds backline under the notoriously defensively-minded coach.

Installed as captain of an exciting young side ahead of the 1998/99 campaign, Radebe was the cool, experienced head at the back He marshalled his band of upstarts to a fourth-placed finish that season and third the year after, as Leeds grew to become title challengers in an era dominated by Manchester United and Arsenal, peaking with their run to the Champions League semi-finals in 2000/01.

Those illustrious names, many of whom stayed but for a fleeting few seasons at Elland Road, garnered the most press attention and acclaim from casual observers, but it was Radebe, the calm leader and dependable organiser, who Leeds fans truly adored.

The humility and work ethic that defined Radebe's playing style and off-pitch demeanour was forged by an extremely difficult upbringing in South Africa, a country in the grip of Apartheid at the time.

From a young age, Radebe was an activist for change in his home country, fighting to redress the racial prejudice he and his people faced on a quotidian basis and struggling against the nation's gross power imbalance. In dangerous times, it was not uncommon for the budding footballer to spend his weekends attending the funerals of friends and fellows activists who'd been killed for standing up for their beliefs. 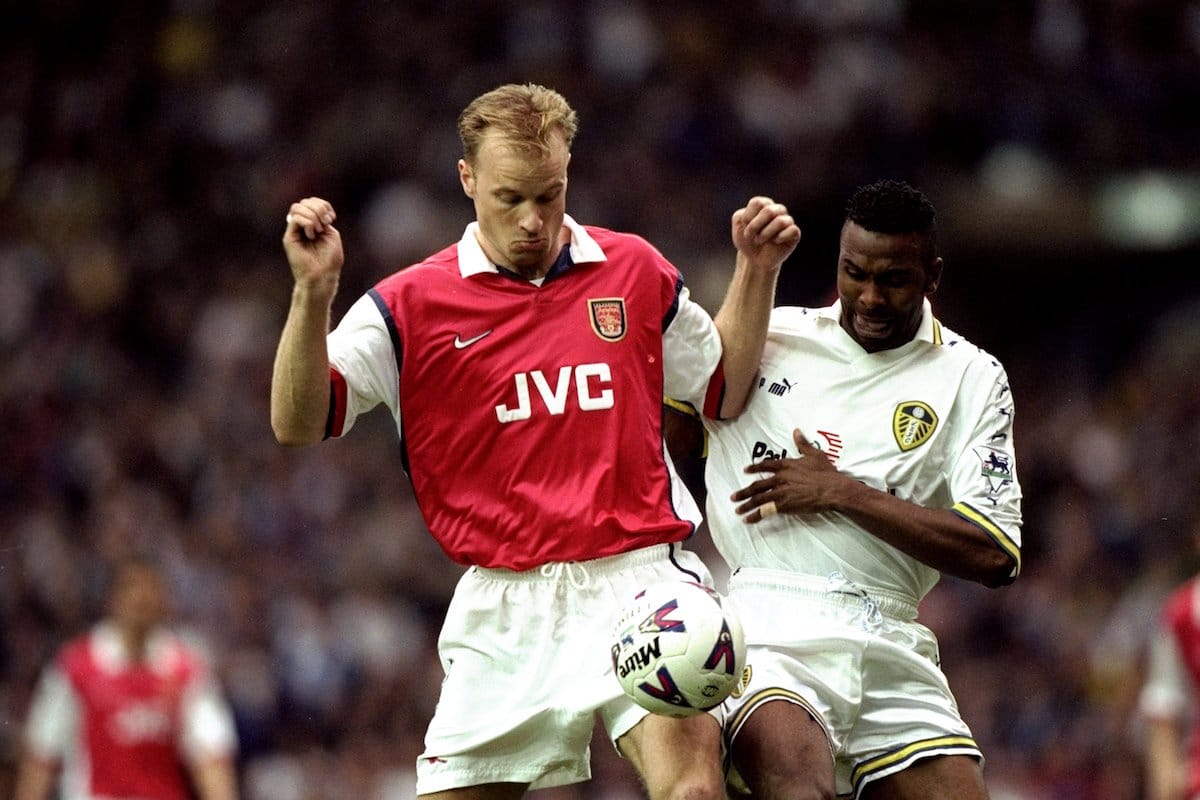 The football pitch was his sanctuary and, after starting life at local level as a goalkeeper, progressing then to a midfield role, Radebe came to star for Kaiser Chiefs, the biggest club in Johannesburg, as a central defender. The skills he'd honed in pick-up games on the streets of Soweto's townships were refined, shaping a centre-back of the highest order: as elegant as he was uncompromising.

By 20, he was a key player for the Chiefs as they grabbed a stranglehold on South African football, a title-winner in two of his four years with the club. However, in 1991, his career – and, indeed, his life – was almost ended when he was shot in his car on the way to do some shopping just minutes from his home.

“To be honest I don't know what the motive was,” Radebe told Soccer Am in 2010 when discussing the shooting, “there was a history of players being shot for changing clubs but, with me, I was just a few blocks from my house when I heard a gun shot and I realised I'd been shot.

“It was like my back was on fire. I was in a car with my younger brother and I remember my leg going numb and then the car stalled.

“I reached back and I realised there was blood so I changed seats and my brother rushed me off to the hospital.

“When I went to hospital I realised I was lucky that the bullet didn't go into any vital organs, it just went through flesh.”

Fortunately, he was able to make a full recovery, and managed to escape the dangerous milieu of his homeland through football. Scouted by a host of top European clubs, it was Leeds who won the race for his signature in 1994, and he stayed with the club, through relegation to the Championship, until his retirement in 2005.

Had it not been for a string of serious knee and ankle injuries, Radebe might have played on longer, perhaps even stretching his 70-cap international career long enough to have led the Boafana Bafana at the 2010 World Cup on home soil. Alas, he has to content his self with the not-insignificant honour of having captained his country at the 1998 and 2002 World Cups.

The final injury that brought the curtain down on a wonderful career at age 35 was a torn Achilles, something difficult to overcome as a young player in peak condition, and an injury that ultimately proved a bridge too far for Radebe at that stage, battle-worn and weary.

But there's no hint of regret, no inclination that he might have reined in his committed playing style in exchange for another year or two at the top. “I've got scars everywhere,” he told the Yorkshire Evening Post in 2010. “They're like my war wounds, picked up in battle. I say to people: ‘This scar on my face was from a clash of heads with Les Ferdinand; this one on my leg was done by Roy Keane or whoever.'

“Most of the marks on my knees are from operation, and you'd wince if you saw them. But they mean a lot to me. When I look at them, I know that I've lived.”

At his late-90s, early-2000s peak, there were few defenders in world football who could match Radebe's blend of determination, know-how, leadership and quality on the ball. The man fittingly nicknamed ‘the Chief' was a supreme athlete, highly intelligent and charmingly selfless in his efforts on the pitch as well as his charity work off it.

He also understood what it meant to play for a club like Leeds, cognisant of Elland Road's hallowed history and striving to offer joy, escape and hope to a one-club city of working-class roots. Offers came for Radebe, Manchester United among them, but he never entertained the prospect of playing elsewhere. Many bemoan the death of loyalty in football, but the virtue was alive and well within Radebe.

Former England manager Terry Venables, who took charge of Leeds for their fateful 2002/03 relegation season, was struck by Radebe's undeniable aura: “I never use the word lightly, but the Chief is a champion both as a sportsman and as a person.” And when Nelson Mandela lists you as one of his heroes, you know you're doing something right.