In 1994 the Premier League was still very much in its infancy. With the second season of the rebranded top flight wrapped up that summer, the winds of change that would transform it into the global superpower of today were still breezing mildly through.

Stadiums around the country were beginning to be redeveloped, and half-time musical acts and performing cheerleaders occasionally adorned Sky Sports broadcasts as the televisual format for the repackaged first division trialled and erred before settling into a recognisable formula. The league itself, however, was still relatively short of star power.

The Premier League's early years were characterised by homegrown talents like Alan Shearer and Ryan Giggs, as well as a handful of illuminating foreign imports such as Eric Cantona and Peter Schmeichel. The league had not yet become the glamorous destination of sought-after stars of the world game, with Cantona, for example, an outcast in his homeland who rebuilt his reputation from scratch in England. Jürgen Klinsmann bucked that trend.

Before signing for Tottenham Hotspur ahead of the 1994/95 campaign, the Germany striker had amassed 168 goals in 388 top-flight games in three different countries, from spells with Stuttgart, Inter Milan and Monaco, and was one of the stars of Germany's 1990 World Cup triumph.

Among the most high-profile and proven strikers in Europe upon his arrival in England, Klinsmann was the Premier League's first superstar signing.

And the fact he only set Spurs back £2million makes Klinsmann's capture all the more remarkable, even if he would turn 30 before the season's kick-off.

In 1994 that was not an insignificant amount of money to pay for a player, but Tottenham effectively funded the deal by selling Vinny Samways to Everton for the same figure, while Chris Sutton, John Scales and Paul Kitson all moved clubs for more money that summer.

“I couldn't believe that Jürgen had just won the World Cup and he was coming to Tottenham – and he was a revelation at Tottenham,” Teddy Sheringham, who partnered Klinsmann in attack, remembered of the German's signing.

Greeted by 14,000 fans, the vast majority of whom of a Spurs persuasion, in his first appearance for the club, a pre-season friendly against Watford at Vicarage Road, Klinsmann's arrival in England was not widely endorsed beyond White Hart Lane.

Having earned a reputation as a diver thanks to a theatrical fall which led to Argentina's Pedro Monzón receiving a red card in the 1990 World Cup final, the English press, mistrusting of foreign footballing imports, lambasted Spurs chairman Alan Sugar's decision to sign the German from Monaco, feeling he'd negatively influence the national game.

In hindsight, while Klinsmann's fall was overly dramatic, Monzón's studs-up, shin-high challenge was, by modern standards, certainly worthy of dismissal.

Adored by the Spurs faithful from the off, the charming, slightly quirky, vintage Volkswagen Beetle-driving centre-forward wasted no time in winning over the wider football-watching public.

After heading a debut goal against Sheffield Wednesday in the season's opener, he made light-hearted mockery of his reputation by diving to the turf, belly first, arms stretches – a celebration mimicked by school children around the country, all peeling away to “do a Klinsmann” after scoring in pick-up games.

Klinsmann started as he meant to go on, too, scoring seven times in his first six Spurs games, before finishing the season with 21 Premier League strikes and 30 in all competitions. He helped Tottenham finish a respectable seventh in the table.

Stylistically, the German was the complete centre-forward; blessed with lightning reactions, he always seemed to be first to any dropping ball inside the penalty area, and was able to finish in a variety of ways. He was remarkably proficient in the air for a man standing a shade under 6ft, and was a brilliant improvisational finisher, able to find the net from any angle, employing acrobatic overhead kicks or neat outside-of-the-boot finishes.

Teamed up in attack with Sheringham, who had top-scored for Spurs the previous season with just 16 goals, the pair combined to net 53 times, with the Englishman's personal tally improving to 23.

They were the perfect partnership; Sheringham was a master operator between the lines, dropping back to find pockets of space from which he could link midfield and attack, while Klinsmann was as impressive and dedicated a goal-getter as the Premier League had witnessed. 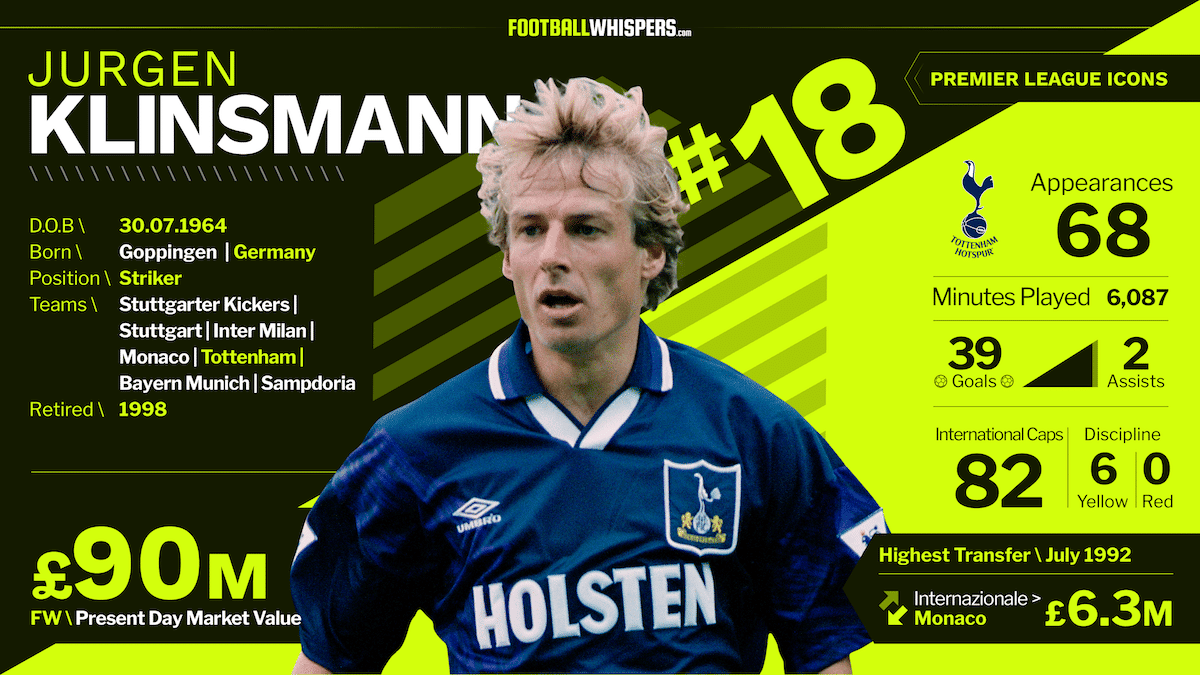 At the end of the campaign, Klinsmann was named in the PFA Team of the Season and, rather ironically given the coverage that met his arrival, crowned the Football Writers' Association Player of the Year.

He would later finish runner-up to George Weah in the ballot for the 1995 Ballon d'Or, but he had already left White Hart Lane before the votes were counted; the clarion call of Bayern Munich, as recent years have shown, often proves irresistible to Germany's best players, and so it was for Klinsmann, who joined the Bavarian giants after just one season in the Premier League.

He would return, however, rejoining Spurs on loan for the second half of the 1997/98 campaign. At the time, the Lilywhites were battling relegation, and the returning hero's nine goals in fifteen games, including a four-goal haul in a memorable 6-2 thrashing of Wimbledon, steered Tottenham to safety.

“There was a lot of tension at the club,” Klinsmann recalled of his triumphant comeback. “But I felt with the players we had, if we all focussed, we would make it.”

Spurs' final game of that season, against Southampton, was Klinsmann's last at the highest level. He retired aged 33 before making at brief comeback at amateur level in the United Stated in 2003.

“For me, it was an unforgettable experience to play here,” Klinsmann told Tottenham's official website in 2017. “I’ve never felt the connection so deeply between the fans and the players in a stadium. You cannot describe the energy when you are on the field. You feel responsible to deliver something to the fans and I will never forget that.

“Of course, there are memories of special goals and wins but what remains after that is the connection to the people here and that’s what I will always be thankful for.”

Although his Premier League stay was short, comprised of 56 games and 30 goals across two spells totalling just 18 months with Spurs, Klinsmann's legacy in the English top flight endures. He was the division's first ready-made superstar, paving the way for countless others who've since followed.

When Premier League was desperate to become the home of the world's best players, Klinsmann arrival was the first step in making it so.