Eric Cantona's asteroidal impact at Manchester United, signing for the club in 1992 and guiding them to four titles in the first Premier League seasons, was felt far beyond the boundaries of Greater Manchester.

Alex Ferguson's astute use of the enigmatic Frenchman as a withdrawn forward, dropping away from the frontline into a space where defenders didn't dare to follow and midfielders were unable to detect, inspired managers all around the country to seek a No.10 of their own, in hope of replicating the Old Trafford side's success.

Many tried, most failed, with Chelsea‘s addition of Gianfranco Zola and Dennis Bergkamp's Arsenal arrival overwhelmingly the most successful attempts at mimicking Cantona's creative influence behind a conventional striker.

Middlesbrough, however, upon their promotion to the Premier League for the 1995/96 season, emboldened by the riches of local businessman Steve Gibson and intent on making their mark in the top flight, snared a creative genius of their own, the technical equal of any of his illustrious peers in that era. Signed from São Paulo for £4.75million in October 1995, Juninho lit up England's north-east with his infectious smile, boundless energy and samba flair.

Juninho first came to the attention of Boro boss Bryan Robson while playing in England for Brazil in the Umbro Cup, a four-team tournament held in the summer of 1995 as a pre-cursor to the following year's European Championship.

The 5ft 5ins playmaker shone for the then-world champions, playing as a No.10 behind a strikeforce which included a teenage Ronaldo – who scored his first International goal in a 3-1 victory over England at Wembley, a win masterminded by Juninho's intelligent passing, movement between the lines and ingenuity.

Robson was assistant to England manager Terry Venables at the time, juggling the position with his full-time role at the newly constructed Riverside. Upon witnessing the little No.10's skills first-hand, the former Manchester United captain quickly investigated the possibility of signing him.

“I didn’t know about him, not until that competition,” Robson told Gazette Live. “But then we got a few videos sent of him playing for São Paulo so we kept watching them and he had great ability, great energy levels, fantastic acceleration with the ball and that’s why I really liked him.”

Though far from a household name on European shores, Juninho was already being targeted by several of the continent’s big hitters, with Arsenal and Inter Milan among those interested in the then-22-year-old.

But Middlesbrough acted quickest, wrapping up a deal for double their initial bid, and 6,000 cheering Teesiders greeted their new hero upon his arrival, revelling as he juggled the ball on the Riverside pitch with trademark Brazilian panache.

Boro had also signed England international Nicky Barmby from Tottenham Hotspur and goalkeeper Gary Walsh from Manchester United that year, as Robson aimed to equip his side to compete in the Premier League. And compete they did, finishing respectable 12th. Juninho hit the ground running, starring in his debut, a 1-1 draw against Leeds United, setting up his side's only goal for Jan Åge Fjørtoft, despite later admitting he found Middlesbrough so cold during winter he stuffed newspaper into his boots to keep his feet warm. 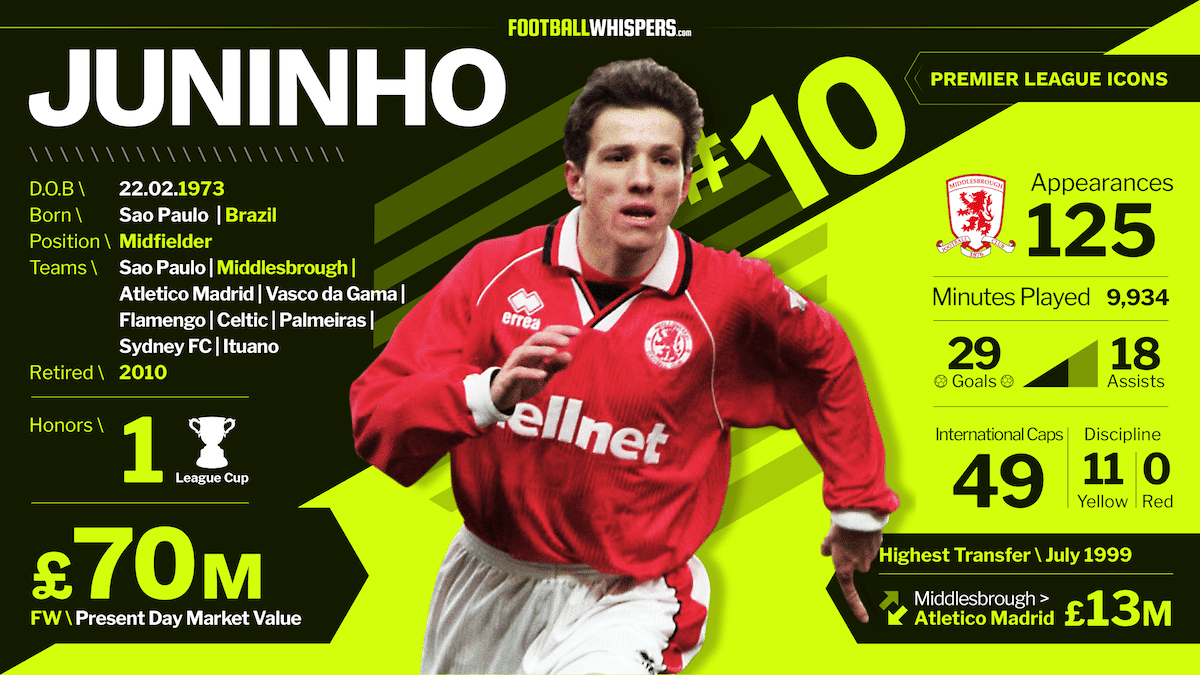 Despite the new arrivals, Juninho was still the star of the show, enjoying his finest personal campaign in a Boro shirt. Though small, the Brazilian was strong of body and will, and his ability to play on the half-turn, receiving the ball and immediately running at the opposition, was a frightening prospect for defenders. His combination play, give-and-gos in and around the penalty area, was exquisite. Juninho finished that season as the Premier League Player of the Year, scoring 12 goals and registering eight assists in 35 league games.

But on a team level, things were altogether less rosy. Middlesbrough were relegated, owing to a trifecta of ills: a lack of cohesion in part caused by Ravanelli's Marmite personality and Juninho's position creating tactical imbalance – unlike Zola and Cantona, he was more of an advanced midfielder than a withdrawn forward, and thus difficult to accommodate without sacrificing defensive solidity. Three points forfeited when illness forced Boro to postpone a fixture against Blackburn Rovers in October and runs to the finals of the League and FA Cup, in which they were defeated by Leicester City and Chelsea respectively, stretched the squad to breaking point.

“I always say when we talk about the success in the cups, the cups got us relegated,” Robson said recently, reflecting upon that difficult season.

“The squad was too small to handle all those games and that’s why we got those injuries, the lads were jaded towards the end of the season.”

Juninho has won no shortage of admirers in England – not least former Manchester United manager Alex Ferguson, who praised the Brazilian for “his courage to play and the courage to want the ball all the time”, in conversation with Hugh McIlvanney of the Sunday Times in 1997 – but he would not be following Boro down to the second tier; Atlético Madrid pounced, forking out £13million to take him to Spain. 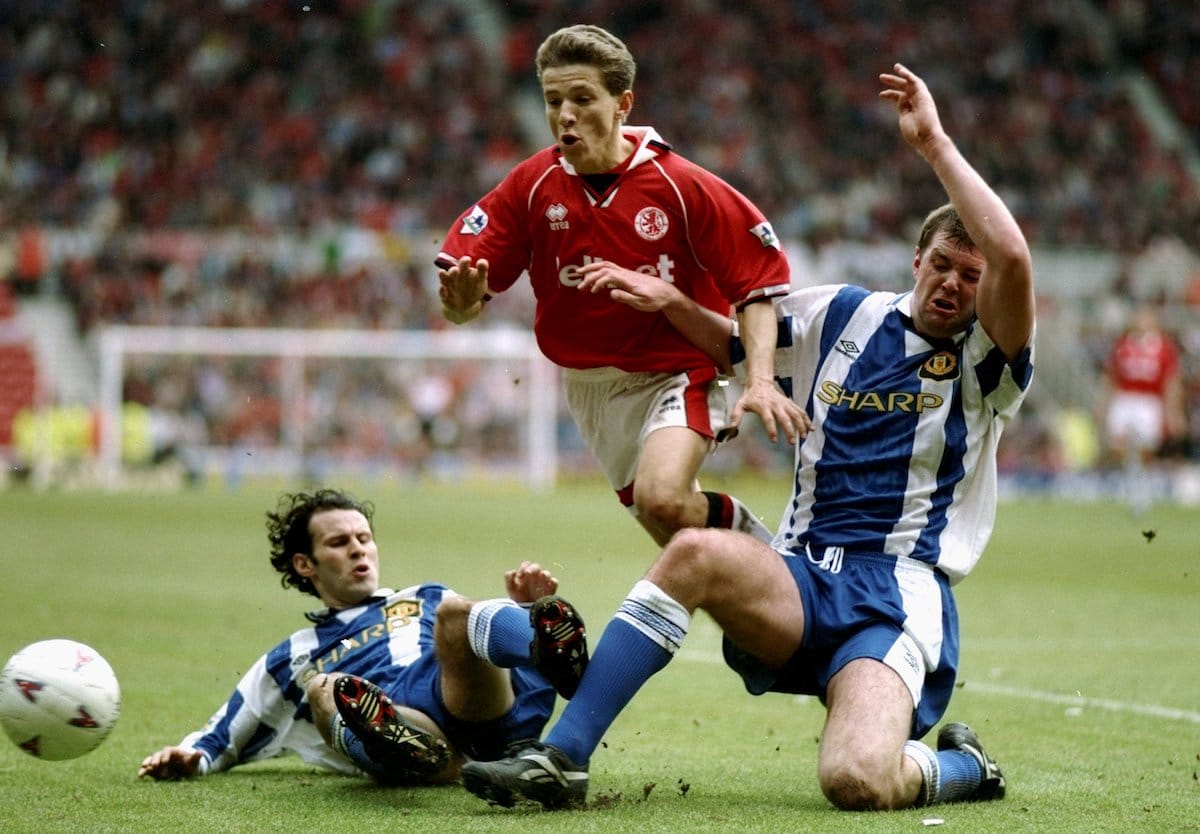 Juninho couldn't resist the pull of Teeside, though, whose people had taken him into their hearts like no other foreign import to the Premier League. So he would return, twice.

Through sparks of genius, Juninho was unable to rediscover the consistent level of brilliance in Spain that had set him apart in England. Manchester United were the first to attempt to engineer a Premier League comeback for the little magician, earmarking him as a worthy addition to their Treble-winning squad in the summer of 1999. But Boro got their man, bringing Juninho home on loan for the 1999-00 season, by which point they had regained their place in the top division.

Scoring four times in 24 games during his temporary return, Juninho then enjoyed two loans back in Brazil – the second of which, with Vasco da Gama, earned him a Campeonato Brasileiro winners' medal – before re-signing permanently for Boro in a £4million deal in 2002, just weeks after the Seleção schemer had helped Brazil win a fifth World Cup.

In his final season back on Teeside, Juninho helped Boro claim their first major honour, defeating Bolton Wanderers 2-1 in the 2004 League Cup final.

Despite a fine return of 12 goals from 48 games in his third stint with Middlesbrough, Juninho was never quite able to recapture the kind of effervescent, lightning-in-a-bottle wizardry that his earlier years were painted with. But that takes nothing away from his legacy.

“For me, that’s where most managers get judged, it’s on your signings and, can you sign top class players to make you a better team and achieve things? For me that’s what Juninho was,” Robson told Sky’s Premier League Legends series.

“I think I made some good signings but I think Juninho is the best signing I made because of what he did and the way he entertained the fans.” So entertained, in fact, that they voted him the club's greatest ever player in a 2007 poll.

A master operator between the lines, always identifiable by his beaming smile and drowning in a shirt at least three sizes too big, Juninho was one of the brightest stars of the Premier League's first decade. Adored by all football lovers, regardless of allegiance, he brought joy, inspiration and imagination, in true Brazilian style.