It is not uncommon for defenders at professional level to have played as strikers in their youth, with Ashley Cole, Patrice Evra and even Sol Campbell relatively recent examples. It is often simply a case of youth coaches stationing their best players in a position from where they can influence games most. Then, when they get to elite-club level, and are exposed to top-end coaching, their position is realigned with their standout attributes.

As strange as it may now seem, Jamie Carragher was another such example. Having witnessed his 17-year senior career, spent entirely with Liverpool, it's difficult to picture the former England international as an attacker. He was every bit a defender's defender: whether at full-back on either side, centre-back or in a defensive midfield role, the Bootle-born Red was a no-frills, heart-on-sleeve, die-for-the-cause sentinel of the Liverpool backline.

By the time he had been granted an apprenticeship with the Anfield club, Carragher was operating in midfield, and formed a key part of Liverpool 1996 FA Youth Cup-winning side, although he has admitted that the Reds' success in the prestigious competition was largely down to the individual talents of Michael Owen.

Carragher signed professional terms with Liverpool just five months after the Youth Cup triumph. But, despite becoming a regular for the England Under-21s – he would even go on to captain the side and set an appearance record for the Three Lions at that level – he was made to wait until January of the following year for his first-team bow, given his debut by Roy Evans in a League Cup tie against Middlesbrough, coming off the bench to replace full-back Rob Jones, three weeks shy of his 19th birthday.

On his first senior start ten days later, at home to Aston Villa in the Premier League, Carragher's old striker's instincts kicked back in, netting a header from a corner against the visitors from the Midlands in front of the Kop. That goal, in just his second first-team appearance, would ultimately account for one-third of Carragher's total career goals, as his focus quickly reverted to keeping them out at the other end.

Aside from occasionally being handed a defensive-midfield remit, Carragher spent the vast majority of his early career at full-back, adept at flanking the back-four on either side and, perhaps, at times, a victim of his own versatility, shifted from side to side to accommodate new Anfield arrivals.

Carragher's true value to Liverpool began to be understood in the 2000/01 season when he played 58 times as the Reds secured a treble of League Cup, FA Cup and UEFA Cup under Gérard Houllier. Carragher featured predominantly at left-back in a side comprised of exciting young talent such as himself, Steven Gerrard, Michael Owen and Emile Heskey, tied together by the experience and guidance of Gary McAllister in central midfield and the totemic Sami Hyypiä at centre-back.

However, Liverpool failed to build on this success, and the treble-winning side was broken up over the next few years, as Robbie Fowler joined Leeds United, Owen signed for Real Madrid, and Heskey was sold to Birmingham City.

As the Reds drifted further from a Premier League title challenge, Houllier was dismissed as replaced by Rafael Benítez in the summer of 2004. The Spanish tactician's arrival was a blessing for Carragher, as he was finally moved into the centre of defence on a regular basis, with Liverpool reaping almost instant dividends.

Carragher's technical skills were undersold throughout his career: he will himself be the first to admit that he was not the most gifted individual in the Premier League, but his passing was crisp and precise, and he was a better crosser than most realised. However, the attributes that set Carragher apart were his positioning, timing, leadership, commitment and desire – all better utilised in central defence than any other position on the pitch.

Deployed alongside Hyypiä in Benítez's new-look backline, Carragher shone, as the pair formed one of the best defensive partnerships in Europe. And Carragher's deep understanding of the tactical side of the game, which now makes him a leading television analyst with Sky Sports, saw him become one of the crucial centre-pieces of the unlikely triumph Benítez would mastermind in his first season in charge of the Reds.

Gerrard, as captain and all-action midfield marauder, enjoyed most of the plaudits reserved for the individual components of Liverpool's 2005 Champions League triumph, but Carragher's contribution to the club's fifth European Cup was equal to Gerrard's.

The miraculous final comeback against AC Milan in Istanbul is remembered for Liverpool rallying to eradicate a three-goal half-time deficit before triumphing on penalties, with Gerrard the driving force, Xabi Alonso the orchestrator and Dietmar Hamann the ad-hoc insurance policy having replaced full-back Steve Finnan at the interval.

But Carragher gave everything he had on that night. The half-time tactical switch saw him redeployed on the right side of a back three, from where he checked Serginho's progress every time the Brazilian flyer crossed the halfway line, swept up when team-mates were caught out of position and tracked Milan runners breaking from midfield.

He also saw plenty of the ball down the right side, spraying passes around the pitch, crossing and running. Collapsing to the turf, struck by cramp after stretching to intercept a Serginho cross, it was clear there was no more-willing soldier fighting for Liverpool's cause than their combative No.23. 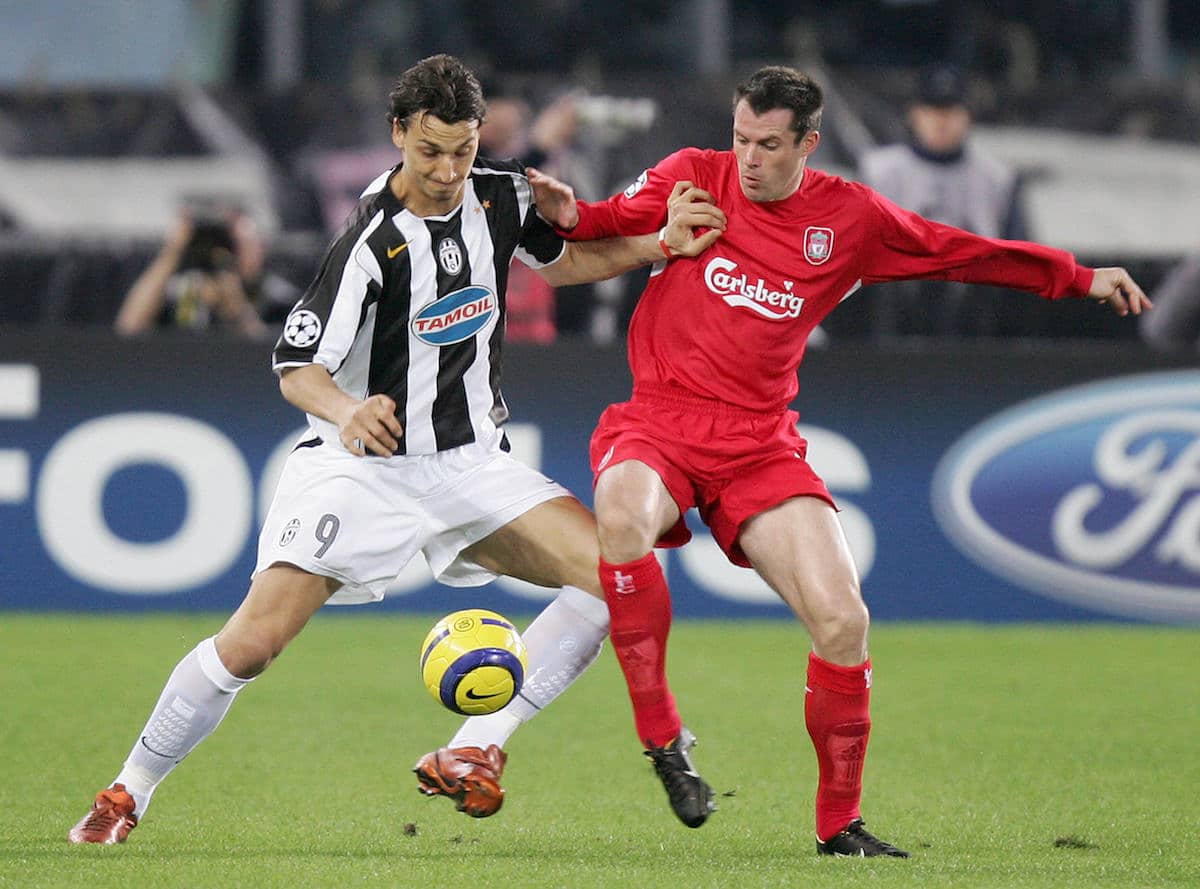 And without Carragher, Liverpool would likely have never even made it to Istanbul. Crucial to clean sheets in each of the semi-final legs against Chelsea, his defining performance came in the quarter-final against Juventus.

Few expected Liverpool to be able to progress at the Italian side's expense, but the Reds fought doggedly to defend the 2-1 first-leg victory they'd earned at Anfield, holding the Bianconeri to a goalless draw in Turin. Carragher was the immovable object that halted the irresistible force of the Old Lady that night, timing every tackle to perfection and shackling Zlatan Ibrahimović and Alessandro Del Piero.

Liverpool as a club enjoy a special affinity with European competition, winning the European Cup more times than any other British club and Champions League nights at Anfield famously spectacular. The fact that no Liverpool player has made as many appearances in continental competition as Carragher (150) is evidence of the defender's standing within the club's storied history. He is also Liverpool second-highest ever appearance maker in all-competitions, with his total of 737 games trailing only Anfield legend Ian Callaghan.

Carragher was never able to help the Reds get their hands on an elusive 19th league title, but he was a key figure in arguably the best Liverpool team of the Premier League era, starring for the runners-up 2008/09, who lost just twice that term.

Like Steve McManaman, Ian Rush, Owen and Fowler before him, Carragher grew up supporting Liverpool‘s bitter local rivals Everton, and would even sport his Graeme Sharp Toffees jersey at schoolboy meet-ups as a young hopeful on the Reds' books. But no one can doubt that Carragher's allegiance rested fully on the red side of Stanley Park during his playing days. One of a dying breed of true one-club men, the Kop would affectionate sing of longing for ‘a team of Carraghers', and the player's own adulation of the club matched the fans'.

The defining characteristic of Carragher's style was his unquenchable thirst for victory, driven by a fiery competitiveness and high expectations of himself and those around him. But, post-retirement, he has admitted that these same strengths were also his weakness, causing a mental struggle when things hadn't gone exactly to plan.

“So, can you enjoy life at the top?” Carragher wrote in a column for the Daily Mail earlier this year. “In my case, I’d say I endured it. Of course, I had unforgettable times but there was a point during the peak years of my career when I visited Bill Beswick, a sports psychologist I knew from the England set-up, for two or three months.

“I’m sure if you asked managers what my best attribute was they would have said mental strength and I needed every ounce of it to succeed. But I used to put myself under enormous pressure to perform and, eventually, I decided I needed to speak to someone away from the Liverpool FC bubble.”

His retirement at the end of the 2012/13 season, though, has given Carragher plenty of time to stop and smell the roses of what was a remarkable career, able to reflect upon 11 major honours and his status as one of the best English defenders of his generation. And he almost signed off in fairytale, if uncharacteristic, fashion, rattling the post from 30 yards in his final game, against Aston Villa at Anfield.

Internationally, Carragher never got the recognition he deserved. The tally of 39 senior England caps he accumulated represents a grand achievement, but it could have been so much more if not for the fact that he part of a generation of exceptional central defenders, including the likes of Rio Ferdinand, Sol Campbell, John Terry, Jonathan Woodgate and Ledley King – an embarrassment of defensive riches upon reflection.

Carragher initially retired from international football after the 2006 World Cup, frustrated at a lack of opportunities and having to accommodate others by playing at full-back or in midfield – a degree of malleability he had long since left behind at club level. But the 2010 World Cup gave him the chance to add a more positive bookend to his England career, having missed a spot kick as the Three Lions were eliminated by Portugal on penalties four years earlier. Coaxed back into the fold by Fabio Capello, Carragher turned out three times before England were sent home by Germany in the knockout rounds.

For the last word on why Carragher deserves to be considered a Premier League Icon, we turn to Sir Alex Ferguson, who managed Liverpool's great rivals Manchester United throughout the defender's career. Putting rivalry to one side, speaking as part of a documentary about Carragher's career made to mark his 2013 retirement, Ferguson gushed about a man he considered “absolutely the type of player a manager wants”.

“He’s been a bedrock of their defensive qualities for years and years. I loved him. He’s a fantastic example for any young lad that wants to play the game.”