As Ian Wright peeled off his Arsenal shirt to reveal a t-shirt marking his usurping of Cliff Bastin as the Gunners' all-time highest scorer, the striker had gotten ever so slightly ahead of himself. The goal he was celebrating, a Dennis Bergkamp-assisted strike 20 minutes into Bolton Wanderers' visit to Highbury in September 1997, was Wright's 178th for Arsenal, pulling him level with Bastin in the all-time stakes.

He soon rectified his error, though, netting unobstructed from two yards out. “I think it was the easiest goal I scored in my career,” Wright, who went on to score a hat-trick in the game, told the BBC in 2018. “And then something just rushed through me.” Off he went, running half the length of the pitch with his jersey over his head, exposing the commemorative, Nike-sponsored vest beneath: “179. Just done it.”

By the time he left Arsenal in the summer of 1998, Wright had scored 185 times for the club, a record later broken by Thierry Henry – although the prolific Frenchman needed more appearances to reach the mark, a measure of Wright's accomplishment.

Adored by the Highbury faithfully, owing as much to the ever-present smile and effervescent character as for his unrelenting prowess in front of goal, Wright remains idolised on the red half of north London. In 2017, he was ranked fourth in a list of the Gunners' 50 greatest players, behind only Henry, Bergkamp and long-time captain Tony Adams, and ahead of such luminaries as Patrick Vieira, Liam Brady and Charlie George.

All of this would have been unimaginable to the teenage Wright, who grew up the son of Jamaican immigrants on an impoverished council estate in south-east London. A football lover from an early age, stinging rejections after trials with Southend United and Brighton & Hove Albion convinced the future England international he had no prospects of a professional career.

Struggling to make ends meet to support his young family, a two-week stint in Chelmsford Prison for unpaid fines relating to motoring offences served as wake-up call. Upon his release, Wright vowed to make good on his natural gifts and put his all into succeeding as a footballer. 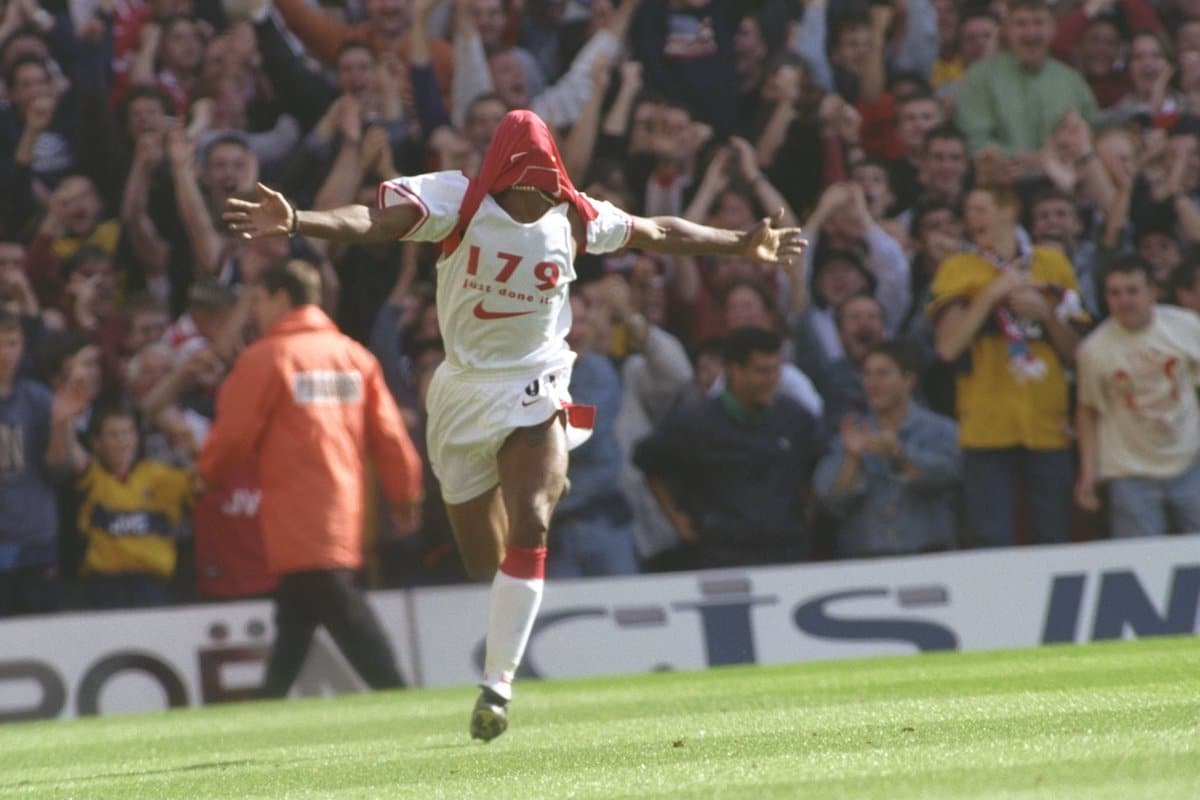 “I came up through Sunday morning football.” Wright explains in his autobiography, A Life in Football. “I went straight from my local Sunday team, Ten-em-Bee, to a two-week trial at Crystal Palace, then a three-month contract followed by a long-term deal.

“I don't really like to push it because it feels like I'm making too much of myself,” Wright continues, “but nobody else did what I did – I can't think of one professional footballer, from back then to right now, who went straight from Sunday morning to as high as the second division of English football with nothing in between. It's a massive jump.”

A late bloomer, Wright penned his first professional deal just three months shy of his 22nd birthday. So, with lost time to make up for, he quickly set about making his mark. He finished as Palace's second-highest scorer in his fist season, netting nine times, before forming a profitable partnership with Mark Bright, who joined the club two years after Wright in 1986.

The fearsome Wright-and-Bright tandem lit up the second tier, combining for 106 goals in the 1987/88 and 1988/89 season, helping Palace earn promotion to the First Division in the latter. In an all-time classic FA Cup final against Manchester United the following term, Wright netted twice to earn a 3-3 draw and force a replay which the Red Devils eventually won.

By now, his Sunday league beginnings seemed a million miles away. Wright was one of the most feared marksmen in the land. His form at the start of the 1991/92 campaign – the last season before the First Division gave way to the Premier League – having scored five goals in the first eight games, convinced Arsenal to part with a club-record £2.5million to secure his services.

George Graham, Arsenal's manager at the time, had brought tremendous success to Highbury, twice a league winner, but his sides had failed to capture the imagination with their playing style. Later, under Arsène Wenger, the Gunners would become synonymous with dynamic, attacking football, but in the early '90s “1-0 to the Arsenal” was the Clock End coda, with enduring images of a Tony Adams-led back four frozen arms aloft, having enticed yet enough victim into their deadly offside trap.

Wright's timely arrival brought an element of fun to Arsenal's play. His pace and undying commitment to probe the space in behind opposition defences brought light to Graham's tactics; his affable demeanour and perpetual grin shone brighter than the Highbury floodlights on even the darkest December afternoons. And the small matter of 26 goals from 33 appearances in his first season as an Arsenal player aided his ascension into the hearts of Gooners.

Wright broke the 30-goal barrier in four of the next five seasons, with his output only dropping below 20 in his final campaign with Arsenal, in which he turned 33. The rate at which he scored, and the manner in which he did so – exhibiting the full gamut of finishing techniques, comfortable with either foot and from anywhere within 25 years of goal – was simply astonishing.

The star of Arsenal‘s 1994 Cup Winners' Cup triumph, Wright rubber-stamped his status as one of Europe's most-feared forwards by scoring in every round of the same competition the following year, before Arsenal fell victim to a 45-yard wonder strike form Real Zaragoza's Nayim in the final.

Albeit with a very different dynamic to his link-up with Bright at Palace, the £7.5million arrival of Bergkamp from Inter Milan in 1995 bestowed Wright with a strike partner who could again elevate his game to new levels. The non-flying Dutchman, as Wright himself has described, inspired those around him on both a technical and professional level. 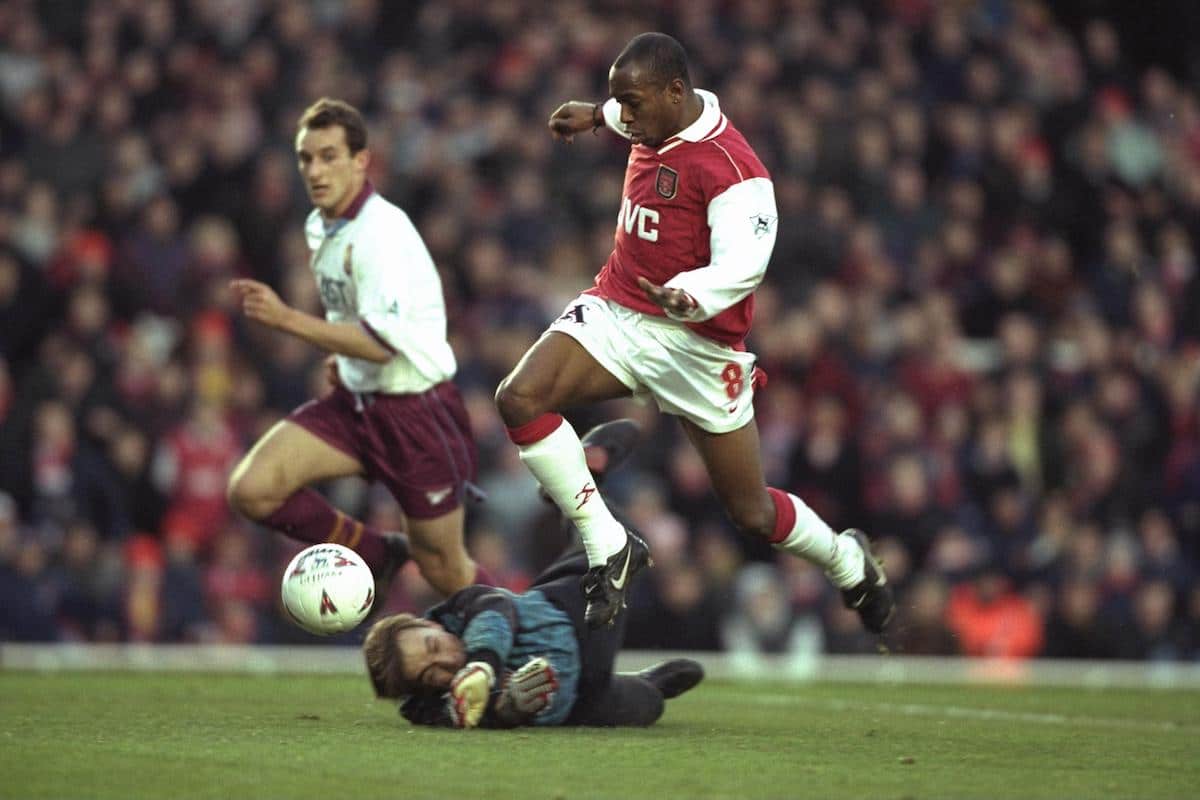 Indeed, the kinship between Wright and Bergkamp was fostered before the former Ajax star had been unveiled as an Arsenal player, the pair meeting by chance and hugging on the forecourt of a London petrol station after Bergkamp had completed talks with the club.

And it was a partnership that almost never came to be. After a fallout with Bruce Rioch, who had replaced Graham as manager in 1995, Wright submitted a transfer request – which was quickly withdrawn – and the new boss had designs on selling the striker and replacing him with Alan Shearer.

But Wright remained and, fuelled by Bergkamp's creative brilliance, netted 23 times in 1995/96 and 30 the following term – “Basically,” Wright wrote of Bergkamp in his autobiography, “he made what I had to do so much easier; in fact, if such a thing was possible, playing with Dennis Bergkamp for three years made my job easy.”

The impetus Bergkamp brought proved a pre-cursor to the wholesale revolution Wenger's appointment as manager in the early part of the 1996/97 season would bring. It is a shame, in some respects, that Wenger's instalment in the Highbury dugout had not come sooner, enabling Wright to lead the line under the Frenchman's tutelage before he'd reached his 30s.

Still, there was time for a glorious final chapter in Wright's Arsenal tale. Although a teenage Nicolas Anelka's arrival from Paris Saint-Germain began to edge the Gunners' No.8 out of the starting XI in the 1997/98 season, Wright, by now 34, managed to contribute 11 goals in 28 games as Wenger inspired a league and cup double in his first full campaign at the helm.

Having gotten his start abnormally late on compared to the path of mist top-level pros, what Wright managed to achieve in his career is remarkable. The one disappointment that lingers when looking back over his time in the game, though, is that he was not able to contribute more for England.

He earned a thoroughly respectable 33 caps across a seven-year international career, scoring nine goals. But at no point was he able to establish himself as England's primary choice to lead the attack, hampered by a competition for places in the striking department that current Three Lions boss Gareth Southgate must reflect upon enviously; although Wright was scoring regularly at the highest level for his club, so too were Shearer, Teddy Sheringham, Robbie Fowler, Les Ferdinand, Dion Dublin and Andy Cole.

As such, Wright missed out on selection for both Euro '92 and '96, while England failed to qualify for the 1994 World Cup, when the Arsenal hitman was arguably at his peak. He did, however, make the cut for Glenn Hoddle's '98 World Cup squad, aged 35, but a pre-tournament injury curtailed his involvement.

Wright's international career does, though, have one obvious crowning glory. As England's qualifying campaign for France '98 wound down, they travelled to Rome to take on the mighty Italy needed a point to secure a place in the finals. Wright led the line and, although he nor any of his colleagues could breach the stubborn Azzurri defence, his lung-bursting efforts as the lone frontman, pressing, harrying and stretching the play, were a major contributing factor in England getting the point they needed.

The proudest of any lion in white, Wright's passion burned through the television screen whenever he lined up for England, the Arsenal man belting out God Save the Queen with unwavering vigour. His moment in Italy was richly deserved.

Informed by Wenger in a Frank discussion in a French hotel room after the 1998 World Cup that a bid for his services from West Ham United had been received and accepted, Wright's Arsenal career was brought to an abrupt halt. The old magic surfaced sparingly at Upton Park, and then at Nottingham Forest, Celtic, Burnley before his retirement in 2001.

Former Arsenal captain Patrick Vieira spoke glowingly of Wright in his autobiography, hailing the striker as “the most charismatic of all players I have ever met,” with “a rare goal-scoring talent”.

But it is his summary of the strength of character that has fuelled Wright's incredibly career that Vieira gets to the root of what mate the Arsenal legend so respected, adored and successful. “All I can say is he just have had a great inner-confidence and strength of mind to keep going,” the Frenchman says of Wright's determination to overcome early rejections.

“Deep down, he must have known that his time would come, because most people in his situation would have given up.”

Ever since determining to manifest a career in the game, giving up was something Wright never gave a moment's thought.